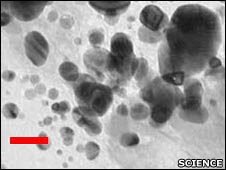 Does the image to the left bring you to tears? No? What if I told you those little black blotches were nanodiamonds, and they provided evidence for theories that a comet might have helped bring the age of the sabretooth and mammoth to an end 12,900 years ago?

Imagine sitting in front of a computer screen and electron microscope, waiting for the moment that would make or break your theory. You're sampling glacial deposits from three time periods: the Younger Dryas Boundary, and the layers immediately above and below. You think a comet broke into fragments (think Shoemaker-Levy) and hit the Earth, leaving no discernible impact crater but doing a serious disservice to the gigantic mammals running about. You're at the make-or-break moment: if nanodiamonds, which would help confirm your theory, are found sprinkled liberally in the layers above and below the Younger Dryas Boundary, your theory is good as dead. Have you made a true discovery? Were you on the wrong track?

I'll let geologist James Kennett describe that moment when a breakthrough is made:

So much for scientists being emotionless drones, and science itself being boring ol' number-crunching, eh?

The story of their search for evidence for their impact theory was interesting enough, but I loved that Nova episode more for what it showed about science. It's hard work, sometimes dull work, and there are no guarantees. But when it all comes together, it's glorious. And it can move you to tears.

Pretty amazing. There's interviews with the discoverers and other info at this link, if you're interested.
Posted by Dana Hunter at 3:24 AM