When I stopped off to pick up my insurance check, I noticed something odd about the floor tiles.  They were all sort of shiny and wrinkly and lumpy.  I paused for a closer look, and very nearly shouted out two words in a paroxysm of glee: "Garnet schist!"

I'm a sucker for schist.  And garnets are near and dear to my heart, being my birthstone and all.  Put the two together, stick them in an unexpected place, and what you've got is a very happy Dana indeed.  One who goes back to the insurance building toting a camera and begging the staff not to think her insane for photographing floor tiles.


Here they are in context:

How awesome is that?  I didn't even know such things existed, but they indubitably do.

So that led me to start asking what, exactly, is garnet schist all about?  I know it's a metamorphic rock, and I know it's pretty.  That about sums up my knowledge.  So I threw the question out on Twitter, and got this reply from our own Ron Schott: 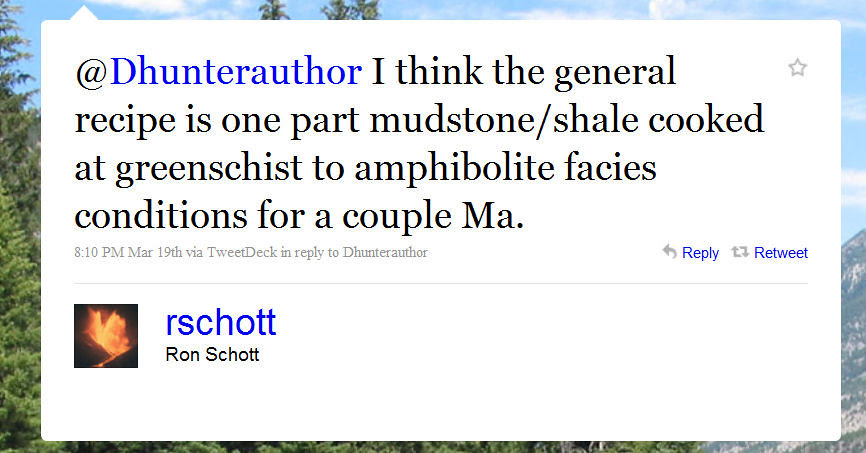 That sound you heard just then, rather like a blimp with a catastrophic failure in its air tanks roaring past at Mach 10, was nearly everything he'd said flying right over my head.  There were words there I recognized.  Problem was, I'd never seen them strung together like that.  And Elli Goeke was off at a conference, so this really wasn't the time to turn to her and say, "Hey, Elli - my ignorance is total.  Halp!"

This is one of those moments when one frantically turns to Google.  Search "garnet schist," and you get bugger-all.  Search something like "greenschist to amphibolite facies," and suddenly you're cooking with Sterno.  Or possibly with vast tectonic forces.

I'll leave it to that link to explain in clear, succinct detail just what the hell that is.  Basically, if you've got major tectonic excitement like a volcanic arc or an orogeny, you've got Barrovian metamorphism going on.  In the context of our delightful garnet schist tiles, this gives us a recipe for their formation.

Let us begin with the garnets.  What sort of garnets are we dealing with here?  The Hudson Valley Geologist can point the way with this wonderful post on garnets.  He says, "Almandine is the most common type of garnet and typically the garnet found in garnet schists."  Almandine 'tis, then: we'll work on an assumption since the insurance company might get a tad upset if I dig up a tile to haul off to the lab.  What's almandine, then?  It's Fe3Al2(SiO4)3.   So we've got iron, aluminum, silicon, and oxygen.

Right, then.  Let us begin with a shale containing said elements.  Maybe our tiles began life on a nice, quiet continental shelf, as clay particles and quartz and all that other stuff gently settled out of suspension and got compacted.  It's nothing particularly special.  Not yet.

Then, let there be an orogeny.  Continents collide!  Squish!  Squeeze!  Temperature and pressure rising!  And something interesting begins to happen:

As our continents collide and our mountains build, our perfectly ordinary shale starts to change.  We're at greenschist facies: 700-900 degrees F (400-500 degrees C) and 5-31 miles down (8-50km).  If our poor shale had stopped feeling the ol' squeeze-and-burn right round there, it might have been fated to be a blackboard, or maybe a nice slate roof.  It might have ended up an unremarkable phyllite, at the farther end of that scale.

So what's happening?  All that pressure-cooking is changing its mineral composition.  At greenschist facies, the index mineral formed is chlorite.  That mineral, in the absence of others formed under conditions of great heat and pressure, tells us just what sort of metamorphism our rocks have been subjected to.  So far, so not schist.  Until we increase the heat.

What do those garnets tell us?  Well, it was hot.  We're dealing with regional metamorphism on a convergent plate boundary, most likely.  Think the Alps, or the Himalayas.  Way down beneath the bulk of the mountains, the former phyllite was busy cooking into schist.  Minerals were lining up in a nice, platy structure, leading to future foliation.  You can rather see that in the tiles, all those lovely linear streaks there.  And deep in that hot, ductile rock, iron, aluminum, silicon and oxygen were busy forming garnets.  These beautiful crystals grow from microscopic dimensions up to something that can be centimeters (and, believe it or not, if conditions are just right, up to meters) across.

The ones in these tiles are fairly small.  Look, I've even remembered to put a nickel in for scale!

They look a little like raisins in a pastry, don't they just?  But if you could move a mountain and pluck out the schist underneath while it's forming (here's hoping you're wearing the best oven mitts in the known universe), you wouldn't be pulling out a sticky, tacky, half-baked and malleable rock.  This stuff can deform, but not on a human time scale.  You know how stained glass "flows" over hundreds of years, eventually bulging a bit at the bottom, over a time frame so long we never saw it moving?*  It's an Olympic-caliber sprinter compared to this rock.  And the pressure it's under is like nothing we've ever experienced.  Lockwood put it like this: "This truck weighs 60 tons. Imagine one parked on every square inch of [your] body. Not something I can picture."


On top of that, only some of the minerals will act plastic.  Some will remain brittle.  But if you add water to the equation, you might get some melting at upper amphibolite facies.  How exactly all that behaves under such extreme conditions is a question I'll have to leave to experts like Elli.

Whatever the details, ultimately, the rock's "soft" enough that those lovely little garnets don't get their style cramped as they form their faces.  They laugh at the pressure.  They bask in the thousand-degree heat.  And, after millions of years of high-quality pressure cooking, you end up with something like my pride and joy, a gorgeous garnet embedded in schist:

But you'd probably like to see the full context, wouldn't you?  Here she is, in all her glory:

So, there we are.  An orogeny's cooked up a nice batch of garnet schist, but it's just down there, miles and miles under the earth, where it can't show off.  Until erosion removes the mountains.  And then it's bold and beautiful and just waiting for some enterprising bugger to quarry it, where it will spend the next phase of its life prettifying the floors in a Seattle-area insurance company office.

There's just something incredible about this.  You don't walk into an office building expecting to see dozens of millions of years laid out ready to tell a story.  But I guess it's appropriate.  This stuff formed in a continental collision, and they pay out claims for collisions of a different sort.

As a special added bonus, here's another garnet I've got.  In rhyolite, in fact.

Yes, garnets are opportunistic little buggers who believe an eruption's as good as an orogeny. But that's a story for another day...

(With special thanks to Lockwood and Ron, without whom I wouldn't have got a start and would have later ended up embarrassing myself.  I'm still likely to have spectacularly screwed up somewhere along the way.  Mistakes, misrepresentations, misunderstands, and general mis-es are my sole responsibility.  You metamorphic petrologists in the audience are welcome to kick my arse, and corrections shall be made as necessary.)

*Okay, so nevermind.  Let this be a lesson in the perils of not fact-checking the stuff you learned in grade school.
Posted by Dana Hunter at 12:17 AM

The myth comes from the fact that early window glass was made by spinning a blob of molten glass into a disc. The glass therefore was thicker towards the centre of the disc. Stained glass makers then inserted the glass panes with the thicker part towards the bottom.

I love it! I was reading it in the middle of giving an exam in intro geology, wishing you were one of my students. Keep up the great work!

Mmmmm, garnet schist! A few years ago while he was still alive, I served as my dad's driver and second set of ears for awhile. One day we visited a bank in his hometown, and I was nearly beside myself -- the counters were all garnet schist! Daddy, fortunately, had by that time accepted that his daughter would at times peer at rock-related things with an unfathomable intensity, and left me to my counter-scrutiny.

On the other side of the continent I've found the same floor in Charleston, SC. I was just as excited. After talking to the building management I found that they have no spare tiles for repairs or free samples. I WANT SOME. Someone is selling it. I bet they have samples. I'll let you know if I find some.