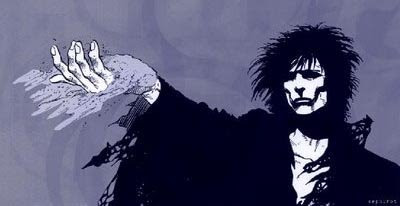 Tomorrow night, it will become clear to you why I'm taking this opportunity to celebrate comic books. And no, it's not because Watchmen came out. Although I am, in fact, rather excited about that.

Truth is, I'm a comic book lover. And I freely admit I used to be the kind of snob who thought they had no redeeming value whatsoever. That was before my Professional Layabout, Justin, snookered, hoodwinked, and otherwise got me addicted by nefarious means.

He started where I'm going to start. It's the only way to turn a sneer into a swoon, really. 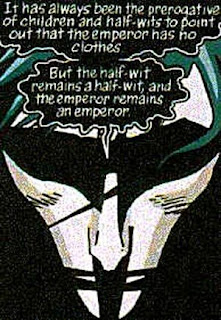 My best friend Garrett tried his best, but being 3,000 miles away, he couldn't break through my skepticism by shoving Preludes and Nocturnes into my reluctant hands with the command, "Read it!" Justin performed this service. Shortly thereafter, he accompanied me on my quest to a variety of Phoenix bookstores as I purchased the entire (then) 10-volume run.

Listen. It's the only comic that won the World Fantasy Award - and threw the literati into turmoil because how the fuck could a comic possibly win prestigious awards? But when your main characters are Endless; when Dream is a grim, dark storyweaver and Death a cute, perky Gothic chick; when your themes are myths and your storylines cover the span of human history, let's just say that your comics kick their novels' ass.

Trying to describe this comic is like trying to explain the complexity and richness of a vintage wine. It's like trying to evoke the awe-inspiring beauty of a Hubble Space Telescope image by using a language that contains no word for color or cosmos. I can't tell you why "Take my hand" is the most heart-wrenching sentence in the English language because of this series. I can't tell you how thrilling it is to come across Marco Polo in the desert, or how delightful it is visiting Baghdad in its glory days. But if you read it, you'll experience these things, and also wonder what really happened to inspire Shakespeare.

Sandman's the most beautiful, lyrical, thought-provoking, and life-changing thing I've ever read. Ever. Topping even Lord of the Rings. If you haven't partaken yet, go do so. Now's good. I'll wait.

Wasn't that wonderful? Well, I've got more, although we're out of the myths and into mayhem.

If you've ever wondered what Hunter S. Thompson would be like were he transported into a dystopian science fiction future, you can stop wondering. Spider Jerusalem would actually kick Hunter's ass, and can out-do him in the drugs-and-debauchery department any day of the week, but you'll get the idea.

He has filthy assistants as well. They are the only women who've ever made me proud to possess an attack uterus.

If I ever become a journalist meself, you have only Warren Ellis's Transmet to blame. If you appreciate good science fiction and merciless social commentary, you must read it. As before, now's good.

Back? You look a little shaken. Perhaps something a little lighter, then, but we'd better bring you down easy.

Only Garth Ennis make something so wrong seem so right. He's the kind of writer who can make the clubbing death of a baby seal hysterically funny. In his defense, it was a zombie baby seal, and Tommy Monaghan felt badly afterward.

Tommy, you see, is a hit man, but not any hit man - he only kills super-powered beings. Did your strange experiment go horribly awry and unleash mutated monstrosities upon Gotham? Call Tommy. And then hope like hell things don't go even more horribly awry.

He's had a gun in Batman's mouth. He's talked Superman out of a depression. He's subjected Green Lantern to humilation. He's teamed up with Catwoman. He's the kind of hard-hitting, slick-talking Irish boy who can turn any ho-hum adventure into a trip down the rabbit hole.

This is one of the funniest comics ever written. Go on, you need a good laugh. Again, waiting.

Ribs aching properly? Excellent. Because now I'm going to slam you with the serious shit.

J. Michael Staczynski, bitches. That's all I've got to say.

All right, so I've got more to say than that, but c'mon, seriously - how much more do you need than the man who created Babylon 5 wrote a comic series? A passing comet gives a select few people around the world superpowers. That would be a big ol' yawn in most other hands, but Neil Gaiman respects Straczynski for good reason. In Straczynski's hands, the exhausted old tropes become epic.

It's not just about the superpowers, or the adventures. This comic explores the dark side. It delves into burden, temptation, and humanity. This is what Neil Gaiman would've written if he hadn't been busy with archetypes.

There's a beautiful scene that will never leave me. I believe it was Ravenshadow, talking to Lauren, when she was about to destroy a lot of people by way of teaching Israel a lesson: "Selah, Laurel. Pause and consider." I can't remember the speech word-for-word, but it was one of the most poignant I've ever read.

All right, you ready for some more kick-arse superheroes-as-you've-never-seen-'em stuff? I thought as much.

Stormwatch and The Authority

Start with Stormwatch, of course, because that's where it began. But The Authority is where Jenny Sparks really started kicking ass and taking names.

If I had to describe this in one phrase, it would be: "Fed-up superheroes." Jenny Sparks said it best when she said, "Don't play silly buggers with me, sonny. I'm not in the mood." The Authority is a group of betrayed superhumans who don't play nice. Not in a world this fucked up. No, they have the power to change things, and they're not hamstringing that power by subordinating themselves. They're The Authority. Let no one forget it.

You may have been hankering for a strong female lead in comics, although after the run I just set you on, I'm not sure why - everything but Hitman and Transmet has kick-ass leading ladies, and the supporting females in those last two certainly aren't delicate. But outside of the Endless, you'll never find a stronger female lead than Jenny Sparks.

If you wanted gay superheroes, The Authority's got those, too. In fact, I do believe the first gay kiss in a mainstream comic was shared in these very pages.

And while you're at it, don't forget to delve into the rest of the excellence that's out there. Comics grew up a long damned time ago. If you haven't been expanding your mind by stuffing as many as possible into your cerebrum, you've been seriously deprived.

As for the already-geeks, favorites in comments, por favor. I'm sure we'll have plenty to talk about.
Posted by Dana Hunter at 1:40 AM

The Hypertwin says: Warren Ellis? Fell and FreakAngels. (We figure you must surely know of these, and that their omission was merely due to some inexplicable freak typographical mishap, or perhaps well-meaning but misguided editing for brevity...) Hypertwin also says there must be exclamation points after the previous sentence, so let's try this again...

I have to add my vote for "Fell" also. Along with Transmet, Warren Ellis at his absolute best. "The Invisibles" by Grant Morrison. Obviously he was doing the same drugs as Philip K. Dick writing this one, but impressed me with how absolutely outside the limits he takes this concept, channeling his own little chaos magician Id into every moment. One of the most imaginative things I've read. Lastly, "The Walking Dead" for one of the harshest, most unpleasantly but excellently human perspectives on what a zombie apocalypse would really mean. Not an easy read, but a very nice perspective on that the whole zombie genre.

Sandman, definitely. It's the comic that taught me that comics don't always have to be about badly-written superheroes in spandex. In webcomics, Lackadaisy, The Pheonix Requiem, and Digger. Finally, in manga, Death Note and Fullmetal Alchemist. The titles of both sound a little silly, but one deals with some pretty heavy moral questions ("If given the power to kill anyone, in any way, with barely more than a thought, is it right to use this to kill criminals and 'reform' the world?") and the other has some pretty interesting subtleties and not a few deep questions of its own, including pondering the meaning of "humanity" when several characters are human/animal chimera hybrids and/or animated suits of armor.

Way back in '79 when Superman was just battling Lex Luthor, Swamp Thing was wrestling with what it means to be human, and losing badly. Omega Man needed money to escape this planet and its constant chatter, and got what he needed in Vegas (telekinesis will do that for you). But then lost it in an altercation with a con woman, in which "his size and gender marked him as the aggressor". But my friend and I were ridiculed by the college librarian when he saw us comparing notes over them.

Then came Maus and The Crow and the floodgates burst open. Batman, Year One. My kids grew up on Sandman. Well, that and The Simpsons.

Yet the comic form is still not taught as literature in most universities. A few classes where I work have discussed Maus but that's it. Why?