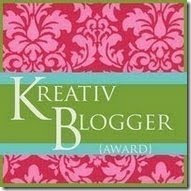 My dear heart sister NP has won the Kreativ Blogger award.  Huzzah!  She promptly passed the thing on to me.  And, like so many things in life, it comes with strings attached.  Deary, deary me.

It seems the requirements are thus: award seven other bloggers, and then list seven favorite fiction authors.  Those of you who frequent the cantina know how I feel about sevens.  So Dana's doing eights, and you lucky recipients can revert back to sevens if you like.

Onward ho, then.  Alphabetical order so as not to play favorites.

Cujo359's Slobber and Spittle.  Seeing as how he's the official Thinking Brain Dog of ETEV, I think you can see why he's chosen.

Efrique's Ecstathy.  Mathematics and charts aren't so scary when he's around.

George W's Decrepit Old Fool.  Going there always makes me feel smarter and happier than I was starting out.

John Pieret's Thoughts in a Haystack.  Nobody spanks the creationists quite like John.

NP's The Coffee-Stained Writer.  Her enthusiasm for the craft keeps mine burning.

Paul Sunstone's Cafe Philos.  The world always seems a lot more beautiful after a visit there.

Z's It's the Thought that Counts.  Always plenty of thought to be had, and fine Elitist Bastardry it be.

Damn it.  Too many wonderful bloggers, not enough room.  Consider a free drink poured for all of you I didn't get a chance to mention.

And now, the authors.  Not bothering with alphabetical this time.

J.R.R. Tolkien.  Dear Professor Tolkien didn't used to be one of my favorites, but now he most certainly is.  He set out to create a mythology for England.  He ended up creating something much greater.  And the fact that it took him so damned long is a great comfort to me.

Neil Gaiman.  He's one of the most extraordinary authors I've ever read.  If it weren't for him, I would never have appreciated comics. What I feel for Roger Clyne in the music world, I feel for Neil in the writing world.

Terry Pratchett.  Comedy in his hands turns into some of the most incisive social commentary I've ever had the privilege to read.  In the old days, he would've been a bard feared by kings.

Connie Willis.  She's hands-down one of the finest science fiction authors ever.  Her serious stuff makes me weep, and her funny stuff also makes me weep.  I will never see space programs or spice pogroms the same way again.

Robert Jordan.  My only complaint is that he died before he finished the Wheel of Time.  He created one of the most richly-imagined worlds ever to exist in fantasy.  Tolkien's heir, for sure.

Patricia McKillip.  She's one of the most lyrical writers out there.  When I need poetry in prose, I turn to her.

Right, then.  Duties discharged, congratulations handed around, now it's time for another drink, my darlings.  Salud!
Posted by Dana Hunter at 3:40 AM

Thanks for the award, m'dear!

Congratulations on your well deserved award!!!

Also, thank you for passing it along!

I'm honored. I now have a couple more blogs to check out, too.