Before we get to the meat of the matter, a quick intro for my new readers (huzzah!  I can haz nu reedrz!): Tomes 2010 is my reading report project, and you can find previous reports here, here, here and here.  I've already incurred the wrath of one reader by increasing the workload on his wishlist, so read on at your own risk.  I'll put everything below the fold so you're not unduly tempted.


Right, then.  I haven't read as much as I'd like - too busy molesting sea mammals and so forth - but I've managed to reduce my groaning unread shelves a bit.  And yes, that is shelves, plural, of books I haven't read.  There's a slight gap in one of them, and I'm already feeling twitchy about it.

Cataclysms on the Columbia: The Great Missoula Floods

I wasn't sure about buying this one.  I'd flipped through it on Amazon, and for some reason, it didn't catch my fancy.  But I picked it up during our pilgrimage to Powell's.  I do not regret the purchase: I regret waiting so long to make it.

How the authors managed to pack so much information into one slender book, I'll never know.  It covers everything from the gleam of floodwaters in J Harlan Bretz's eye to detailed explorations of the landscapes those floods created.  A good half of the book follows the course of the floods from their source in Montana to where they at last poured into the Pacific Ocean.  I wish I'd had this before I went to Grand Coulee, but it helped me comprehend the landscape in retrospect, and gave me plenty of ideas for further exploration.

The writing is outstanding.  The beginning bits are written by Marjorie Burns, who has a flair for scientific storytelling.  Her writing sucks you in as if you'd been caught in a current of one of those massive floods.  And it doesn't turn dry when the boys take over - scientific detail does not equal boring, and they know it.  All of them are excellent writers who know their subject intimately.  This is the book that brought it all together for me, and really helped me comprehend the scope of those floods and the evidence of their passage.  So, if you want to borrow my copy: I'm happy to will it to you, and then you can pry it from my cold, dead hands. 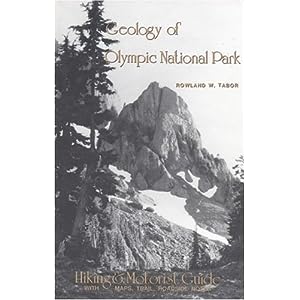 I don't know why, but it's incredibly hard to find books devoted to the geology of the Olympics.  So when I saw this at our local bookstore, I did indeed squee, even though it's nearly old enough to get a rental car.  This is a good introduction to the Olympics, even though some of the geologic interpretations have changed.  It's got plenty of clear, concise illustrations of rock formations and geological processes, combined with an enormous section actually walking you through the park.  This is the kind of book I look for when I'm headed to a large, complicated national park - something that will explain not just stuff in general, but features in particular.  This one's going in ye olde messenger bag when we head up there next week.

The Extended Phenotype: The Long Reach of the Gene

You know, I probably shouldn't have tried to read this during  ye olde battle with the summer cold, but I did.  I think I even understood some of it.  This book wasn't written for a lay audience suffering from complete nasal blockage and related loss of brain function.  So if you haven't read it but would like to, I suggest you do so when you are in peak condition.

That said, it's Dawkins: it's clear, it's intriguing, and even a suffering person's few remaining thoughts will be provoked.  This book gets you out of the organism trap.  It can also extricate you from misinterpreting-what-selfish-genes-are traps.  And you'll never look at a beaver dam in the same way again.

A lot of the difficulties in thinking about natural selection melted away when I read this book.  It really does make it easier to understand how these assemblages of genes can band together and evolve alongside each other to create complicated creatures and behaviors.  And it'll also make you look at human cities in a whole different way.  But I don't have to sell a Dawkins book - he sells himself.  Just go read it - or read it again. Death by Black Hole: And Other Cosmic Quandaries

I'm ashamed to admit that I'd always meant to read Neil deGrasse Tyson's books but hadn't yet when I went to see him at Seattle Townhall.  Thing is, I've been on a geology and biology spree, so it took awhile to get back to astronomy.  And after reading Death From the Skies!, how else could I follow it up except by reading this?

I am thrilled to report that Neil deGrasse Tyson is just as snarky in print as he is in person.  And I loves me some science with snark!  I dog-eared a lot of pages, and it's hard to choose just one quote from this delightful book of essays, but I'll go with this one:


What are the lessons to be learned from this journey of the mind?  That humans are emotionally fragile, perennially gullible, hopelessly ignorant masters of an insignificantly small speck in the cosmos.
Have a nice day.

Fire Mountains of the West: The Cascade And Mono Lake Volcanoes

You know what, this probably isn't the best book for someone with even a mild volcano phobia to read, especially someone who lives right in the middle of all these fire mountains.  I used to console myself with the certain knowledge that volcanoes give warnings before they erupt, and that vulcanologists are keeping a wary eye on them.

That was before I read the chapter on Mount Rainier and got all the horrifying detail about how mudflows don't need no stinkin' eruption to go roaring merrily down the mountain and bury us all.

That said, this is a damned fine book.  I haven't read anything quite so thorough, and it chases volcanoes from California to Canada, revealing their biographies in loving geologic detail.  Wanna go on a field trip now!  Everyone who lives in the shadow of the Cascades needs this book, especially the folks who have strange ideas that those lovely active volcanoes are a minor danger at worst.  And don't worry - it's not all gloom, doom, death and destruction.  There's plenty of dry humor as well, especially in the chapter about Mount Shasta, in which we learn about the various mystical beings who inhabit the mountain, including the Yaktayvians.  If you thought Shasta's caverns were natural features, you're so totally wrong, cuz it's all about bell power, baby, yeah!  What the authors think of such matters can perhaps be best summed up by the following quotation: "How these populous folk manage to share their space with the Lemurians, Atlanteans, and several other lost tribes who have set up housekeeping inside Shasta is not known."  I imagine a tongue or two got sprained from being so deeply stuck in cheek during the writing of that sentence. 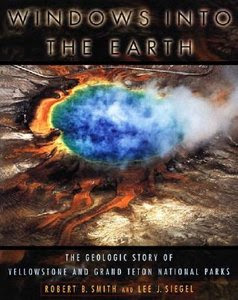 Windows into the Earth: The Geologic Story of Yellowstone and Grand Teton National Parks

How else to follow up Fire Mountains of the West but with a supervolcano?  And I'm glad I did.  You see, if you watch teevee, you're probably under the impression that Yellowstone's gonna blow any second and kill us all in our beds.  The truth is a bit less exciting than that.  It's not necessarily overdue for a catastrophic eruption anytime soon, and if it does blow, it may just be a series of much smaller eruptions that will not take out most of North America.  So that's good.

I learned quite a bit I didn't know about the history of the Yellowstone hotspot, like its eruptive patterns and the fact that it had actually managed to take down major chunks of mountain ranges.  People usually think of volcanoes as creating mountains rather than eating them, but Yellowstone's a different animal.  I learned quite a lot about how the faults around the Park work, too, including their effects on geysers.  Then it was over to the Tetons for a short, sharp lesson in normal faults and their mountain-building activities.  We've got a lot more to worry about from hijinks on that fault than we do from Yellowstone itself.

Then there's a wonderful little travel guide, complete with mileage.  Combine that with rich illustrations, and you've got a book that's very much worth your time.

And that's it for now.  I'm reading a book at the moment that I'm tremendously excited about and shall tell you about in its own stand-alone Tomes 2010 feature, but that must wait until I've actually finished it.  Besides, I think I've done enough harm to your wish-lists for one day.

I have the first edition of Cataclysms on the Columbia. Its an interesting story on how uniformitarinism so dominated thinking in geology. Bretz luckily lived long enough for vindication in his life time. It starts with things that are just not supposed to be including the Dry Falls and the ripple marks. Another issue is that Montana geologists did not talk to Eastern Washington geologists. Else the ripple marks south of Flathead lake could have been correlated with the scablands in Washington, or with the remants of the high stands of the Columbia near Portland could also have entered the picture.