Oh, Schist! And Other Stories

Yes, it's taken me this long to settle on an appropriate deskcrop for this month's Accretionary Wedge.  In point of fact, I haven't got any deskcrops.  I haven't got a desk.  If I did have a desk, I wouldn't be able to use it, as it would be covered in rocks, books, and the occasional knickknack.

I have, however, got bookshelves, the bits of which that aren't filled with books and knickknacks are covered in rocks.  I have also got tables, which are mostly covered in rocks.  Breakfast bar?  I hope you like stone-cold stones for meals, because that's what's on the bar.  Little half-wall in the entry way?  Home to more rocks.  And every single rock in this house has some sort of meaning.  Each and every one tells stories.  And they were all hollering "Me! ME! MEEE!" when I attempted to choose just one.  Worse than puppies, they are.

Ultimately, it came down to rocks from home.  And I couldn't choose only one.

Some of you may not know this about me, but I have an abiding fondness for schist.  I'm not sure why.  There's just something about its foliation that I adore.  It may have a lot to do with the fact that it's a) not volcanic, b) is metamorphic, and c) something I can identify with greater than 89% confidence despite all that.

It wasn't always like that.  In fact, the first piece of schist I collected, I figured was just an unusual bit of volcanic rock.  It's the dark one here in this photo: 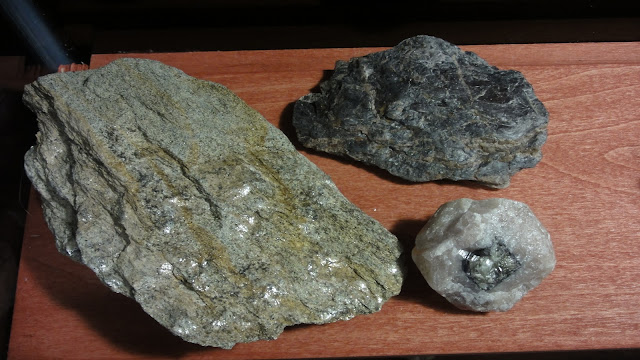 It's been with me since the early 2000s, when I grabbed it from the formerly-vacant lot behind my old apartment.  Needed nice, dark, interesting rocks for a mini-Zen garden I was building, didn't I?  And there it stayed for years, nestled in white sand, and after I moved to Washington it lived in a Ziplock bag, awaiting a day when I had more space for Zen rock gardens.  Then I visited Arizona, picked up that lovely golden piece of mica schist that's sitting beside it, removed it from its bag to add to the Arizona collection, and went, "Wait a damned minute... Oh, schist!"

I believe it may even be a bit of Brahma schist.  Not sure.  I mean, it was sitting about 3,000 feet above where it should've been, so I know it's a souvenir rock someone picked up and later discarded.  An anthro-erratic, if you will.  Could've come from anywhere.  But I love it anyway.

The mica schist beside it comes from the Mingus Mountains (no, people from Arizona don't usually refer to them as the Black Hills, at least, not where I came from).  And that other bit there is a very nice little grossular garnet I picked up at the same rock shop.

But I promised you more than schist, and here's a nice little bit you may enjoy from the same display: 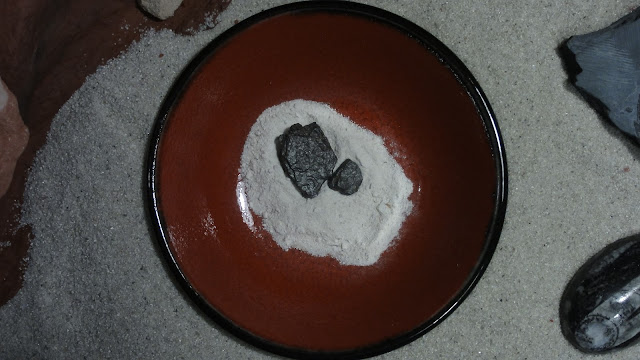 That, my darlings, is a fragment of the nickel-iron meteorite that slammed into Northern Arizona about 50,000 years ago and left us with the enormous hole in the ground known as Barringer Meteor Crater.  They sell bits of it in the gift shop.  I was rather skeptical, so I grabbed a magnet with a bottle opener and a resin-encased scorpion and did a little field test.  Tink!  Yep, it's magnetic, all right.  So I bought the bits, and a tube of rock flour.  That white powder is pulverized Kaibab limestone.  The meteor hit so hard that it turned major bits of strata right over and turned some into dust so fine that the frontier ladies used it as talcum powder.

So many rocks in that case.  So many stories.  But I shall conclude with this one: 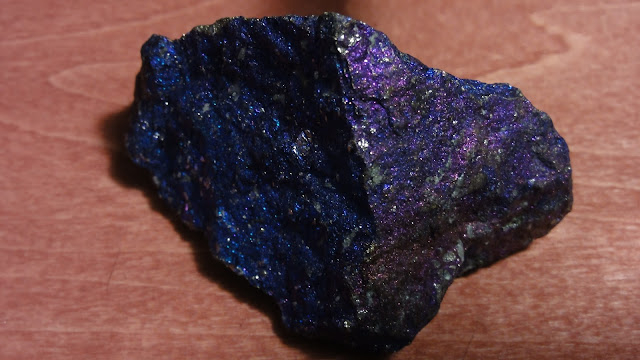 That, my darlings, is a lovely bit of bornite, which I first knew as peacock rock.  Fascinated me as a kid.  I couldn't care less if it was a copper ore back then - all I knew was, it's pretty.  And I'd lost my piece.  So one of my major objectives when I went home for a visit was finding a nice specimen.  Where else to go but Gold King Mine, where I'd got my first?  If you ever get a chance, go to Jerome and visit Gold King Mine.  It's a hoot, and they have lovely rocks and fossils in their shop.

Aside from the fond childhood memories, aside from teaching me more about the copper industry to fueled so much northern Arizona commerce, and aside from the fact it's pretty, this deskcrop also broke the barriers between me and my newest brother.  You see, my parents had acquired a lavender-point Siamese, whom I hadn't seen since he was a tiny kitten.  He didn't remember me.  He wanted nothing to do with me.  I was a Very Scary Intrusion into his settled universe.  He ran from me whenever I came in - until the day I returned from Gold King Mine with a nice set of rocks and fossils.  I'd laid them out on the carpet while I sorted, labeled, and stowed for the journey home.

He inspected the fossils, creeping ever closer, and found the bornite as tasty as I do: 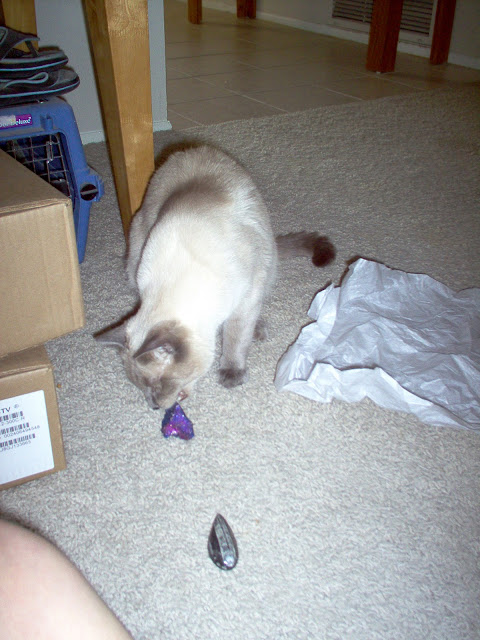 We have been friends ever since.  So, my darlings, remember this: geology not only provides us with knowledge, awe, wonder, and amusement, it can also facilitate better relationships with the important felids in your life.  Trust me, bonding happens.  Especially when you're doing something fascinating, like trying to build a home for all those lovely samples: 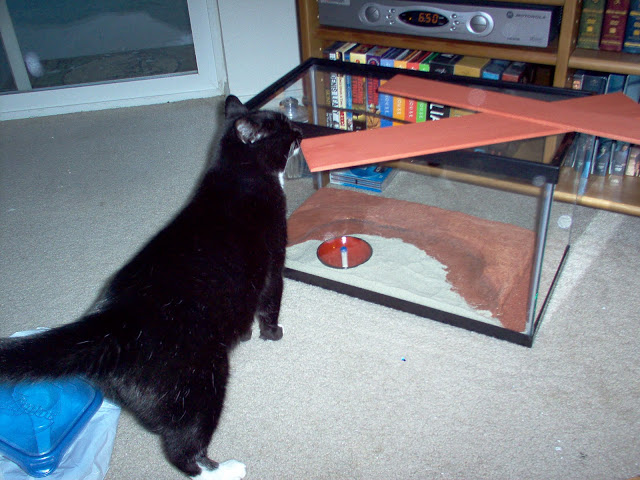 Cats love deskcrops.  Spread the word!
Posted by Dana Hunter at 3:20 AM

The deskcrop topic raises an interesting issue which rock would one pick for ones pet rock. (In one sense as the craze noted rocks make ideal pets they generally stay where you put them and are very low maintenance.
My selection would be a piece of the LaHood formation a Belt age conglomerate from Montana near Cardwell. It has nice 1 inch sized inclusions in it. (I learned about it in the 1/2 of the IU Field camp I took until I found that being in sage brush all day and I did not agree).
Here is a link to a post about it:
http://mountainbeltway.wordpress.com/2010/06/12/lahood-conglomerate/