"Into the Valley of Death Rode the" 600th Post 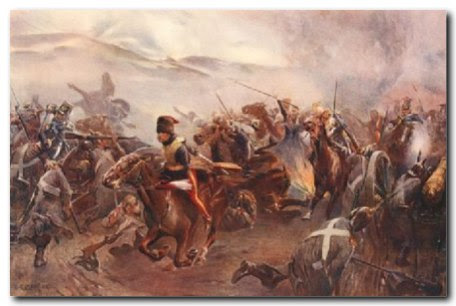 Alfred, Lord Tennyson was one of my favorite poets growing up. I got introduced to him, no shit, by Laura Ingalls Wilder. Pioneers on the American prairie read England's Poet Laureate. How awesome is that? Until I branched out and really got addicted to ancient and Eastern poets, he was Teh Master as far as I was concerned. Well, at times, Robert Burns edged him out, but only just.

I didn't know how to read poetry back then, so I always read "The Charge of the Light Brigade" in a sort of nostalgic, lilting, mournful tone. I remember being annoyed at the high school English teacher who taught me how it was actually supposed to be read: with a martial, heroic tone, like a thunderous charge. "Into the valley of Death / Rode the six hundred."

I was always amused by the "Oops" factor of this poem. If some absolute idiot hadn't botched orders, and some other absolute idiot not blindly followed them, there would've been no heroic but doomed charge, and no poem. It was one of my first introductions to the importance of questioning authority. My future liberal and rationalist tendencies might have been predicted by the fact that I never could figure out why a grand and stirring poem was written in praise of a bunch of goobers who damned well should have reasoned why, and further, should have presaged Shaggy by saying, "Great plan, Lord Raglan. There's just one problem - we ain't doing it."

Still. No one can deny that out of a total debacle came one of the greatest poems in the English language. And so, I use the excuse of my 600th post to present it for your reading pleasure.

"Forward, the Light Brigade!"
Was there a man dismay’d?
Not tho’ the soldier knew
Some one had blunder’d:
Theirs not to make reply,
Theirs not to reason why,
Theirs but to do and die:
Into the valley of Death
Rode the six hundred.

Flash’d all their sabres bare,
Flash’d as they turn’d in air
Sabring the gunners there,
Charging an army, while
All the world wonder’d:
Plunged in the battery-smoke
Right thro’ the line they broke;
Cossack and Russian
Reel’d from the sabre-stroke
Shatter’d and sunder’d.
Then they rode back, but not
Not the six hundred.