Alas, due to various and sundry distractions, I haven't been keeping on with the science blogs as I should. For this Sunday's Sensational Science, I do believe we'll need to remedy that situation.

But first, I just want to point out something: blogs, and the internet in general, have been a boon to science. Instead of having to wade through expensive peer-reviewed journals at the library, getting misinformed by newspapers and magazines, or having to wait for new editions of books to incorporate cutting-edge research, we now have a place where scientists and science journalists share the very latest with a wide audience quickly and inexpensively. This is getting science into the hands of the masses in a major way, and it is teh awesome.

Just look at all the goodness that hit my screen this evening. Hot, fresh science, delivered up in bite-sized morsels. Or, in this instance, images of gigantic snakes:

Just wait — this one will be featured in some cheesy Sci-Fi channel creature feature in a few months. Paleontologists have dug up a fossil boa that lived 58-60 million years ago. They haven't found a complete skeleton, but there's enough to get an estimate of the size. Look at these vertebrae!

The extinct beast is estimated to have been about 13 meters long, weighing over 1100 kg (for us Americans, that's 42 feet and 2500 pounds). This is a very big snake, the largest ever found.

The size isn't what mattered to me when I read this post. It was the fact they can use this snake to estimate the temp at the time. And, reminded that snakes (like other cold-blooded critters) can get larger when it's warmer, this has given me a disturbing glimpse at unmentioned hazards of global warming.

I don't have a snake phobia - yet.

(As an aside, how long do you think it'll be before some creationist pounces on this as the remains of Leviathan or the serpent from Eden, eh?)

Ginormous boa constrictors apparently weren't enough this week. From Brian Switek, we get a blast from the past:

Standing before the Linnean Society in 1839, the celebrated British anatomist Richard Owen delivered a detailed description of a strange new creature. Owen called it Lepidosiren annectans, an African relative of an eel-like animal that was found by the Austrian explorer Johan Natterer in the depths of the Amazon jungle in 1837. The naturalist sent two specimens back to the Vienna Museum where they were quickly described by Leopold Fitzinger under the name Lepidosiren paradoxa.

Fitzinger considered the organisms to be "perennibranchiate reptiles", meaning that it was a primitive amphibian that did not undergo metamorphosis. Instead, according to the author of a helpful Living Age column, it remained "a gill-breathing, muddy, fishlike groveller, all the days of its life." The animal Owen had was different,* but it was similar enough to Natterer's specimen to allow for a close comparison of this important new genus.

Right. When time travel comes available, the ancient Amazon is right off my itinerary.

Do you need a good transitional whale to whack IDiots over the head with? Brian has the goods:

Just announced in the journal PLoS One, Maiacetus was a member of the Protocetidae, an extinct group of early whales that beautifully illustrate an important phase of whale evolution. Previously known members of the group include Rodhocetus and Protocetus from Pakistan and Georgiacetus from the southern United States, the latter animal illustrating that this group included the first whales able to cross oceans.

Unlike Basilosaurus, these whales still had hips that were attached to their vertebral column. Many members of this group probably swam by undulating their spine while paddling with their limbs, perhaps similar to the way an otter moves through the water. The fusion of the hips to the spine limited their range of movement, but it did allow them to support themselves on the shores of the estuaries and coastlines they inhabited.

These are generalities, of course, because not all members of the Protocetidae were the same. In particular they were marked by differences in limb proportions, and Maiacetus fits snugly into the continuum of anatomical types. Rodhocetus, for example, has very large hind limbs ended with flat, paddle-like feet. Protocetus, by contrast, had much smaller hind limbs that were probably not very important to locomotion; its tail was more important to its swimming style. Maiacetus is closer to Rodhocetus in form but its hind limbs are smaller and do not show the same adaptations for hind-foot propulsion. What does this mean?

Well, for one thing, it means I get to laugh harder at creationists than usual.

Turning from paleontology to biology, we find Abby Smith ecstatic:

The gods of HIV-1 research have a new paper in PLOS Pathogens, and to me, its real good news for those of us looking for an HIV vaccine.

Im probably going to do several posts on this paper (lots of cool findings), but I want to get this one bit of good news out there before some ass 'science journalist' mangles it :P

Haaland et al followed about 2,000 (2,000) discordant couples (one partner was infected with HIV-1, the other was not). At set points in time, they tested the non-infected individual for the prescience of HIV-1 and antibodies to HIV-1, hoping to catch transmission right when it happened so they could characterize what goes on, so we can figure out how to stop it.

Read on for the reveal. This is why genetics are important, kids.

Finally, Efrique shows us what the Game of Life (which I played for untold hours back when I had it on my desktop) and Belousov-Zhabotinsky reactions have to do with each other. I can't extract this one - you've gots to go see it to believes it. 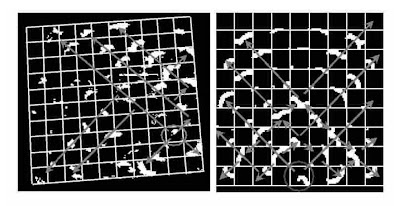 Great stuff, and thanks for the link