George at Decrepit Old Fool sent me a link to Wired Science's spectacular article on satellite images of volcanoes. Many of them were shot from space shuttles and the International Space Station. They're not the only sources, though - satellites have snapped some amazing pictures themselves.

When we think of NASA, we usually think outer space - but NASA frequently turns its electric eyes Earthward. The results are spectacular. And they help us understand Earth in ways impossible before the space age.

The following three sets of images and words are all from the article. 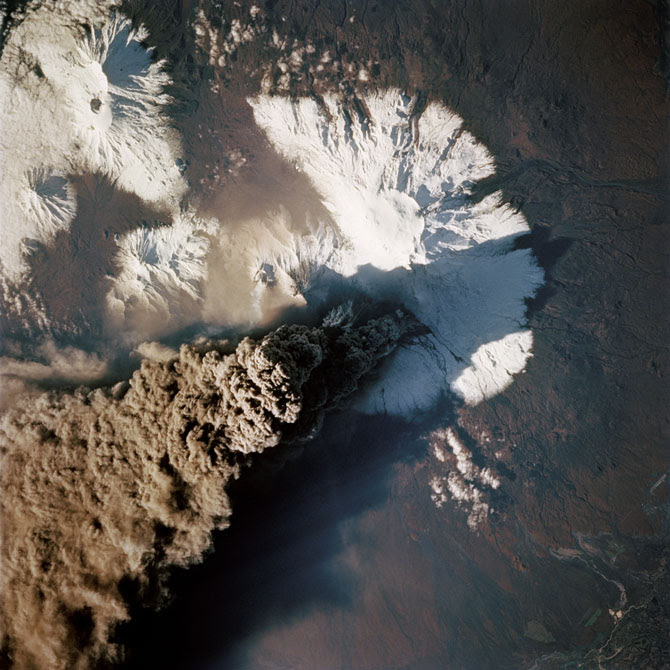 Many of the stunning images of eruptions captured from space are of violent stratovolcanoes, such as the one above of Kliuchevskoi, the most active volcano on Russia’s Kamchatka peninsula. The image above was taken by astronauts on the space shuttle Endeavour in 1994, as an eruption was just getting underway. The ash plume reached as high as 50,000 feet. 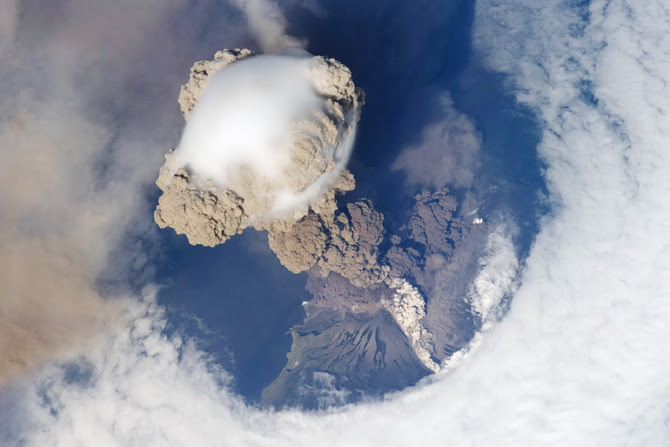 Astronauts aboard the International Space Station caught a lucky glimpse of the start of this eruption of Sarychev Volcano in the Kuril Islands, northeast of Japan, on June 12, 2009. This was the volcano’s first eruption in 30 years.

The smooth white cloud, known as a pileus cloud, topping the eruption column may be made of water condensation caused by rising and cooling of the air above. In contrast, a dark gray cloud of ash near the ground is probably an avalanche of hot ash and rock known as a pyroclastic flow. 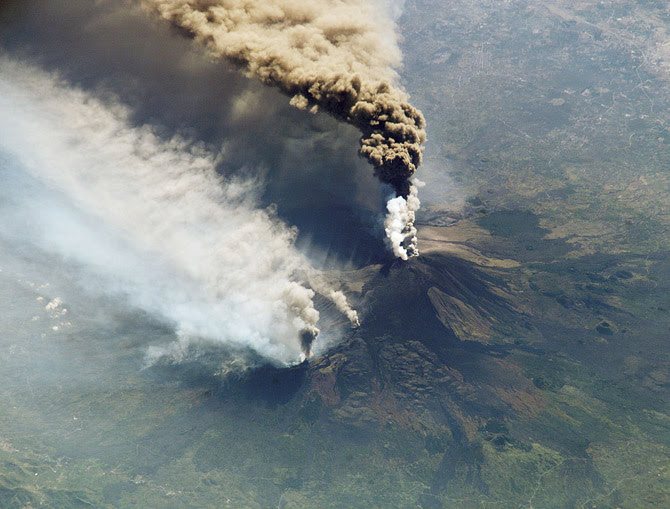 Mount Etna is the second tallest volcano in Europe, at almost 11,000 feet. It is one of the most active volcanoes in the world and is erupting nearly continuously. It is no surprise that there are many great photos of this volcano erupting, including this one captured by astronauts on the International Space Station in 2002. The lighter colored plumes of smoke on the slope of the volcano in this picture are from forest fires ignited by lava.

Earth, of course, isn't the only tectonically active world in our solar system. Some moons still feature volcanic eruptions; planets like Venus and Mars host some of the most incredible extinct volcanoes around. Did I say extinct? Maybe they're merely sleeping. Read on...

March 9, 2007: Andy Cheng has seen it all. The scientist from Johns Hopkins' Applied Physics Lab has worked on the Galileo mission to Jupiter, the Cassini mission to Saturn, the NEAR mission to asteroid 433 Eros and many others during his decades-long career. Alien vistas are old hat to him. But even he was amazed when he laid eyes on this photo of Io's Tvashtar volcano, taken Feb. 28th by the New Horizons spacecraft.

Tvashtar's plume dwarfed grand old Prometheus, rising 180 miles (290 km) above Io's surface. (For comparison, volcanoes on Earth spew their gas and dust just a few miles high.) "The patchy and filamentous structure seen in the Tvashtar plume suggests to me that condensation from gas to solid particulates is occurring," he says. In other words, the gas could be crystallizing in the cold space above Io to form a kind of sulfurous snow.

Volcanoes spewing snow? It is an alien world. 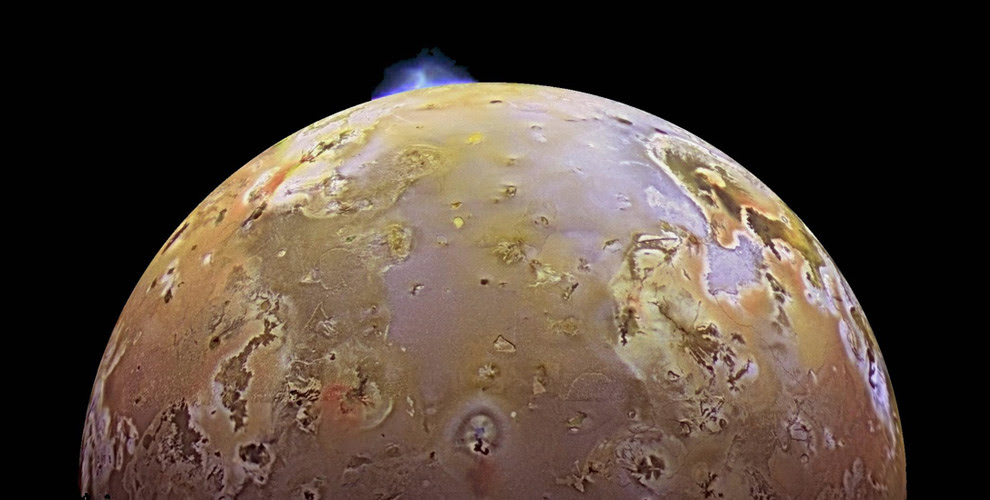 This image, acquired during Galileo's ninth orbit around Jupiter, shows two volcanic plumes on Io. One plume was captured on the bright limb or edge of the moon, erupting over a caldera (volcanic depression) named Pillan Patera. The plume seen by Galileo is 140 kilometers (86 miles) high, and was also detected by the Hubble Space Telescope. The second plume, seen near the terminator, the boundary between day and night, is called Prometheus. The shadow of the airborne plume can be seen extending to the right of the eruption vent. (NASA/JPL/University of Arizona)

The Hubble Space Telescope has snapped a picture of a 400-km-high (250-mile-high) plume of gas and dust from a volcanic eruption on Io, Jupiter's large innermost moon.

Io was passing in front of Jupiter when this image was taken by the Wide Field and Planetary Camera 2 in July 1996. The plume appears as an orange patch just off the edge of Io in the eight o'clock position, against the blue background of Jupiter's clouds. Io's volcanic eruptions blasts material hundreds of kilometers into space in giant plumes of gas and dust. In this image, material must have been blown out of the volcano at more than 2,000 mph to form a plume of this size, which is the largest yet seen on Io. 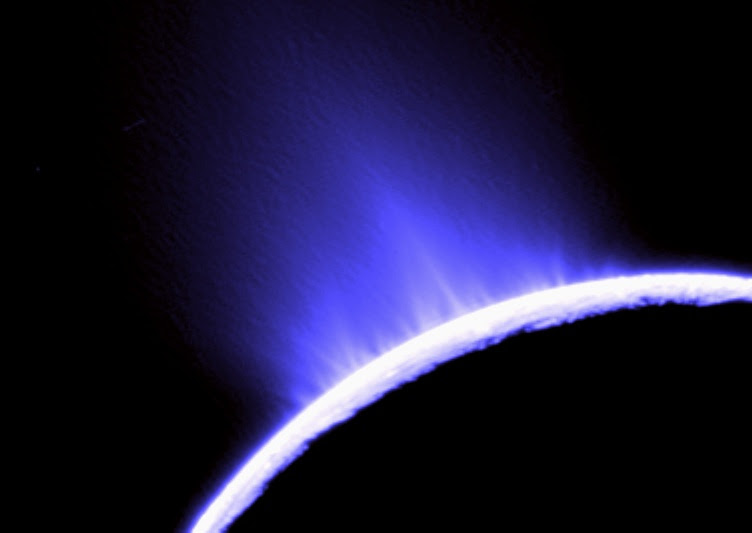 Ice geysers erupt on Enceladus, bright and shiny inner moon of Saturn. Shown in this false-color image, a backlit view of the moon's southern limb, the majestic, icy plumes were discovered by instruments on the Cassini Spacecraft during close encounters with Enceladus in November of 2005. Eight source locations for these geysers have now been identified along substantial surface fractures in the moon's south polar region. Researchers suspect the geysers arise from near-surface pockets of liquid water with temperatures near 273 kelvins (0 degrees C). That's hot when compared to the distant moon's surface temperature of 73 kelvins (-200 degrees C). The cryovolcanism is a dramatic sign that tiny, 500km-diameter Enceladus is surprisingly active. Enceladus ice geysers also likely produce Saturn's faint but extended E ring. 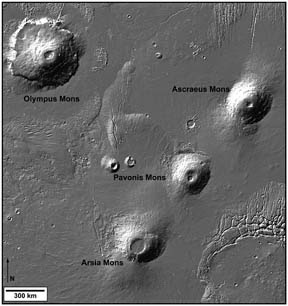 New research raises the possibility that Mars could awaken from within -- three large Martian volcanoes may only be dormant, not extinct. Volcanic eruptions release lots of greenhouse gasses, like carbon dioxide, into the atmosphere. If the eruptions are not complete, and future eruptions are large enough, they could warm the Martian climate from its present extremely cold and dry state.

NASA-funded researchers traced the flow of molten rock (magma) beneath the three large Martian volcanoes by comparing their surface features to those found on Hawaiian volcanoes.

"On Earth, the Hawaiian islands were built from volcanoes that erupted as the Earth's crust slid over a hot spot -- a plume of rising magma," said Dr. Jacob Bleacher of Arizona State University and NASA's Goddard Space Flight Center in Greenbelt, Md. "Our research raises the possibility that the opposite happens on Mars - a plume might move beneath stationary crust." The observations could also indicate that the three Martian volcanoes might not be extinct. 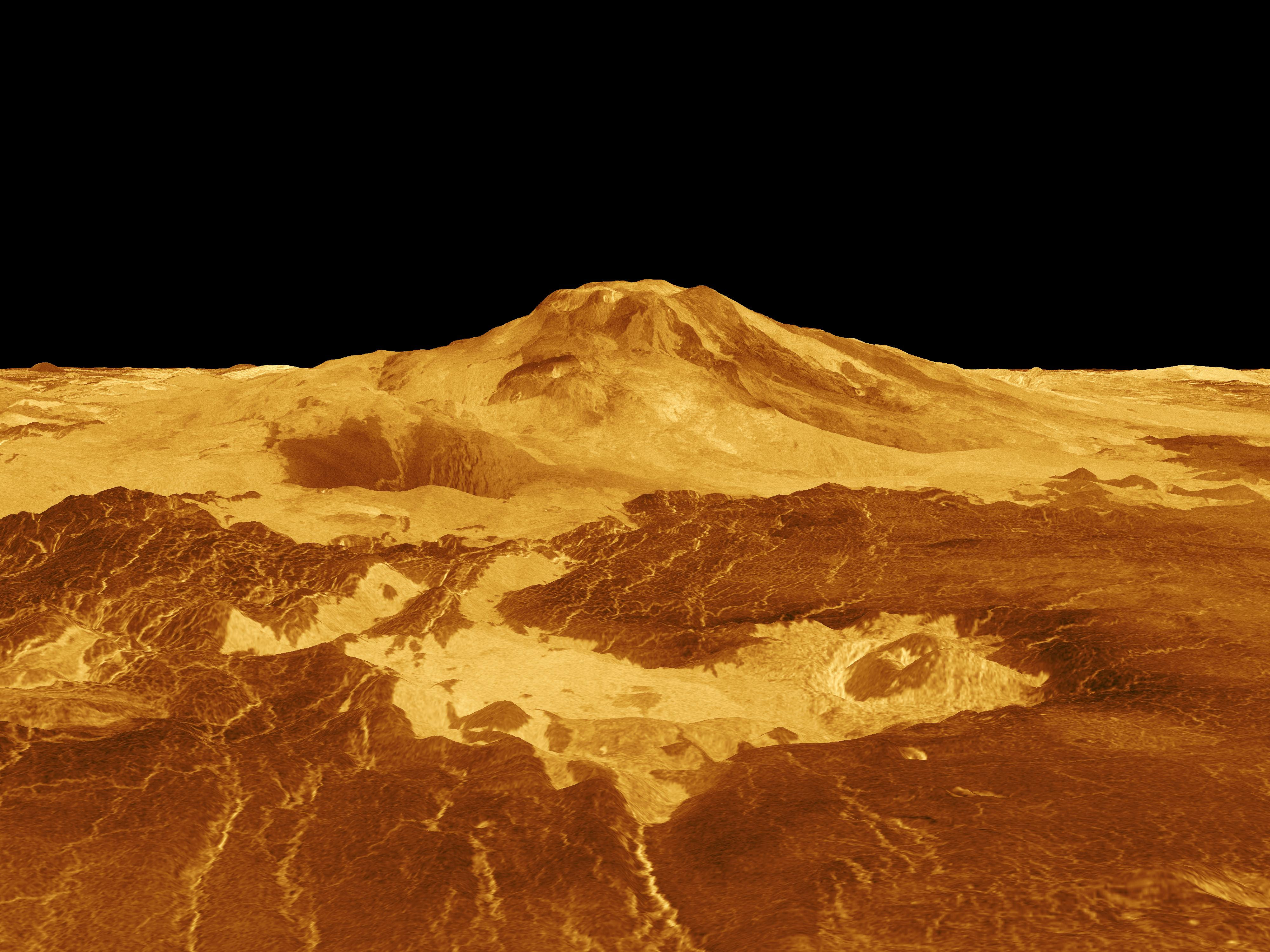 The volcano Maat Mons is displayed in this computer generated three-dimensional perspective of the surface of Venus. Radar data is combined with radar altimetry from NASA's Magellan mission to develop a three-dimensional map of the surface. The viewpoint is located 634 kilometers (393 miles) north of Maat Mons at an elevation of 3 kilometers (2 miles) above the terrain. Lava flows extend for hundreds of kilometers across the fractured plains shown in the foreground, to the base of Maat Mons. The vertical scale in this perspective has been exaggerated 10 times. Simulated color and a digital elevation map developed by the U.S. Geological Survey are used to enhance small-scale structure. Print-resolution copy (1 meg jpg image) Credit: NASA/JPL 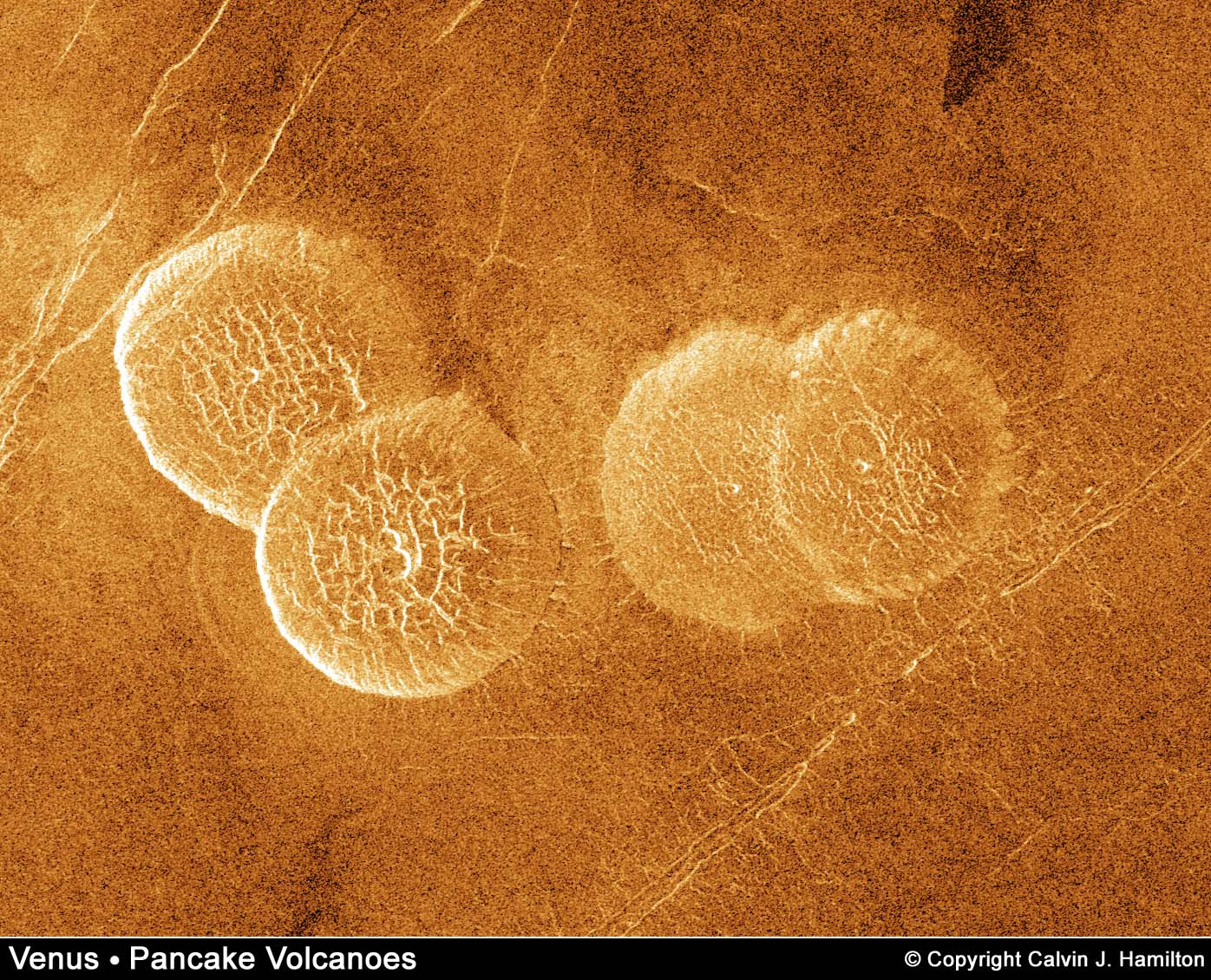 This cluster of four overlapping domes is located on the eastern edge of Alpha Regio. The domes average about 25 kilometers (16 miles) in diameter with maximum heights of 750 meters (2,460 feet). These features can be interpreted as viscous or thick eruptions of lava coming from a vent on the relatively level ground allowing the lava to flow in an even lateral pattern.

Images and discoveries like these make me damned grateful to have been born in the last quarter of the 20th Century. Perhaps, if we're extremely lucky and astronomers find a planet suitably close, we'll even live to see the first images of a volcano erupting in another solar system. How's that for sensational?

For more outstanding images of volcanoes in action, check out this link.
Posted by Dana Hunter at 5:21 AM

This sort of thing must be stopped. Nowhere in the 10th amendment does it mention any form of space exploration to be funded federally.

Y I'm sure that Hamilton and Jefferson just left it out of the initial constitution, after all they both had their own spaceships...