You would think that, having spent the day driving down from Seattle, climbing to the tip-top of the Astoria Column for a panoramic look at the geology around the mouth of the Columbia River, exploring Ecola State Park, and wandering about Hug Point's geology both north and south until the tide chased us away, I'd be sleeping in a bit the next day.

You would be wrong.

I popped wide awake just around five in the morning.  Now, I could've tried to go back to sleep, or read a bit, but there was this ocean less than a mile away.  So out of bed I bounced, and promptly found out that the parking lots for the beaches don't open until 6 in the ay-em.

What to do but drive about aimlessly, and run into the reason why Lincoln City bears its name?


I've always liked Lincoln, ever since I was a wee little girl.  I liked him before I found out all that stuff about him being a great leader and freeing slaves and so forth.  I liked him because of this:

He always had his nose in a book.  Would do anything to get his hands on a book.  Read anywhere and everywhere.  "Abraham Lincoln did it, too!" is a powerful argument in defense of one's obsessive reading habits.  Those weird enough to prefer the Midwest over the West can call upon Lincoln for backup, too: the little plaque on this statue mentions that he could've been the governor of Oregon Territory, but he politely told those offering the position to stuff it.

Now, you may be thinking, "But what about the beach?!"  Well, we've actually been standing on it this whole time.

Dig beneath the concrete, pavements, buildings, and landscaping, and you'll find Pleistocene sand and dunes.  Dig far enough, and you'll hit Tertiary mudstones.  And that tells a story of tectonic uplift that spans hundreds of thousands of years, while the sea level bobbed and dipped in response to the waxing and waning of ice ages.  During the Pleistocene, the sea level sometimes rose higher than it is today.  Waves eroded nice, flat beaches on ye olde Tertiary bedrock, carving wave-cut platforms.  Higher seas deposited sand all over the nice new platform.  Wind picked up sand and busily built dunes.  Then, glaciers (and the land) rose, seas fell, and a lovely flat marine terrace got left behind, while the sea busily went to work carving a new wave-cut platform and created a new beach at the feet of the old.

And it's finally 6 in the ay-em, so we can head to the current beach rather than the fossil one.  Here we are at the "D" River Beach Wayside, where we can discuss a hell of a lot of geology in one short space, while the sun rises behind us.

Note those sea cliffs to the left.  They get up to more than a hundred feet high, and if you wander over for a closer inspection, you'll see they're composed of terrace sandstone, topped with a dollop of dune sand.  Near-vertical, bald bluffs get carved into those (geologically) young Pleistocene sediments by waves, stress-release fracturing, rainfall, groundwater seepage, and graffiti.  Indeed, graffiti.  That is, in fact, the main reason for the bluffs' retreat inland: people carve crap into the cliffs, kids dig caves, and the next thing you know, the cliff face is weakened enough to fall down and go boom.  Hard to believe, innit?  But you might want to mention to anyone you see out carving away that the homeowners up top might get very annoyed when their house follows the falling bits down onto the beach.

Let's have a look at this beach, because it's an interesting feature.  It's what's known as a dissipative beach, and you'll see why in this photo:

Stand here for a few moments and watch the waves hurtle up the broad, barely-sloped beach.  Watch them lined up along the entire length, which by Oregon standards goes on forever.  By the time they make it partway up the beach, they're exhausted.  The most they can do on a normal day is merely nibble the toes of the bluffs, if even that; in fact, conditions are generally mild enough that talus accumulates at the base of the cliffs, sometimes lounging on the beach for years.  During severe storms coupled with a high tide, when waves can be dozens of feet high (and one wave on one memorable occasion measured 95ft, nearly as tall as the tallest cliff), the talus gets swept out.  Even then, waves don't mount a direct assault on the cliffs, and never does manage to undercut them.  For a while, though, bits fall off the cliffs at a higher rate, until a new respectable pile of talus builds up.

Those winter storms, incidentally, don't remove just talus.  The whole beach goes away, revealing the silt-and-sandstones of the Nestucca Formation.  For a while, you can wander about on Eocene bedrock, until the sand comes swooshing back.

And you know what's really wild?  Might as well never have happened at all.  Sand sweeps up the beach in one direction in summer and in another during the winter.  It gets poked, prodded, rolled and razzed by the waves.  And yet the net littoral drift of all that harassed sand is a big fat 0.  Zero.  Nada.

Look north for the reason:

Ah, yes, our old friends the rocky headlands!  We're in the shadow of the Columbia River Basalts even here, where you're surrounded by sand and sedimentary stone.  You see, those lovely hard volcanic headlands have nosed their way into deep enough water, and there are sufficiently many of them all up and down the coast, that they've formed pocket beaches nearly the entire length of Oregon.  Some of those pocket beaches are long, like the one at Lincoln City, and some are tiny, but they're all little kingdoms unto themselves.  Oregon's sand is not allowed to flee.  Not for long, anyway.

Have a look at the fine sand here: 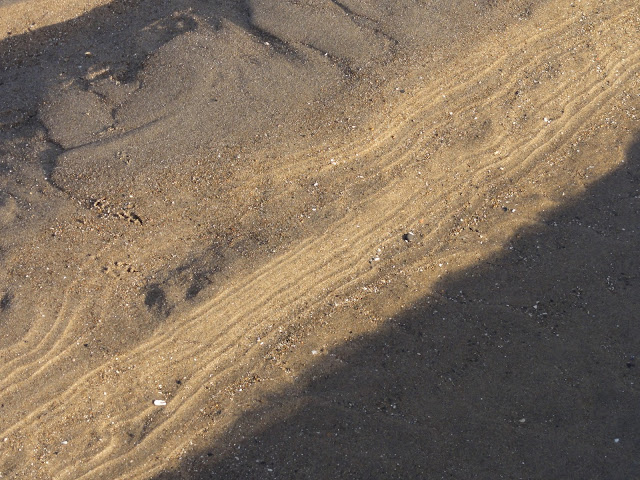 You've got your basic quartz and feldspar, and a few minerals that tell us a lot of this sand eroded from the Klamath Mountains, along with bits from the Coast Ranges and suchlike.  The really neat thing about this is, the sand here isn't the same as sand elsewhere on the Oregon coast.  Those little pocket beaches jealously guard their sources.  On some beaches, you'll find sands eroded from the local headlands, some more long distance; some coarse, some fine.  The coarse stuff especially, which erodes from the sea cliffs, doesn't seem to have got much of a look-in before about 300 years ago, when the enormous subduction zone earthquake that sent a tsunami to Japan lowered bits of the Oregon coast and thus led to some pretty vigorous sea cliff erosion action.  Neat, eh?

The time has come to reveal why this is the "D" River Beach Wayside:

The time has come to introduce you to the D River, which has been claimed by some as the world's shortest river.  There's even a sign that says so, so it must be true.


Here it is very nearly in its entirety:

There was a time when it was known simply as "the outlet," before a contest decided that the world's shortest river deserved the world's shortest name.  And an outlet is about all it is - the thing's only 440 feet long at low tide.  When you get a very high tide, the river's down to 120 feet.  And yet, it's wider than some rivers in Arizona, and certainly has more water in it.

That water does fascinating things there on the beach.

It moves along pretty quickly, for all there's not much slope.  As it plays around with the beach sand, it seems to create its own little jumps, which it then leaps joyously over.  The water gets so excited in places it froths:


You can see river gravel in its bed:

Which the ocean waves sometimes filch, and then run up the beach:

You can sit and watch the river erode a bank into the beach:

This is a river that seems to live life from concentrate.  It may be the shortest river in the world, but it's certainly not the dullest.

So where the hell is this very short river coming from, you might wonder.  There's this lake, you see, formed in uplifted marine sediments about 14,000 years ago.

It's 680 acres, a third of a mile wide, three miles long, and (drumroll, please) all of 21 feet deep.  But it nestles between the Coast Range foothills and the coast like the liquid equivalent of a Montana sapphire.


Its watershed covers all of 12.1 square miles.  And its outlet is none other than the D River.  Neat!

These images were taken at Regatta Park, where the bastards were getting ready to have a bloody regatta, which meant I had to take my shots quick and get out.  No time to linger.  But that gave me time to find a truly fine exposure of the Pleistocene dune and beach sands on NE Devil's Lake Road:

Someday, if nothing untoward happens to it like, oh, say, getting completely eroded away, this old beach deposit may end up becoming sandstone, and some future geologist will be cooing over its bedding:

And because I can't resist, here's just one more:

With that, it was time to return to the hotel, where my intrepid companion was probably awake and wondering WTF I was out doing.  We'd soon be on our way to hook up with Suzanne in Netarts Bay on our way to Cape Meares, but as you'll soon see, we got waylaid by Cape Kiwanda and one of the most fascinating sandstone headlands on the entire Oregon coast.

As ye olde tomes of indispensable reference failed me for this area, I present instead ye olde links:
Oregon Coast.org: About Lincoln City - source of some interesting tidbits on statues and short rivers.
The Devil's Lake Plan, Devil's Lake Water Improvement District (.pdf)
Shyuer-Ming Shih and Paul D. Komar: Sediments, Beach Morphology and Sea Cliff Erosion within an Oregon Coast Littoral Cell, Journal of Coastal Research (Winter 1994).  Hooray for informative abstracts!
Paul D. Komar: Ocean processes and hazards along the Oregon coast.  Oregon Geology, Volume 54, Number 1, January 1992 (.pdf).  The paper that allowed me to sound like I'd known this stuff all along!

Ernest H. Lund: Rock Units and Coastal Landforms Between Newport and Lincoln City, Oregon. The Ore Bin, Vol. 36, No. 5 May 1974 (.pdf).  Another paper that allowed me to sound like I'm savvy.


George R. Priest and Jonathan C. Allan: Evaluation of Coastal Erosion Hazard Zones Along Dune and Bluff Backed Shorelines in Lincoln County, Oregon: Cascade Head to Seal Rock.  State of Oregon Department of Geology and Mineral Industries OFR O-04-09 (.pdf).  No, I did not read all 93 pages!
Posted by Dana Hunter at 12:09 AM

did i say wow?

does this mean there will be a part 6? woohoo!!!

There sure are a lot of places in the Northwest that have those big honkin' sand deposits.