And I'm spent. Also very, very behind in this week's blog reading, so if you lot want a nice, fat Los Links come Monday, I'm going to have to pawn you off with a little light (ah-ha-ha) entertainment.

The sun has forsaken us now, but last week, Seattle attempted to apologize for not giving us an actual summer. Lovely 80+ degree days with wonderfully cool nights, my favorite. I usually don't open the curtains in the bedroom, because keeping the place a dark cave prevents it from getting warm, but over the last several sunny days, I took to letting the sunshine is for the poor kitteh, who wasn't getting enough quality porch time.

This met with some approval. 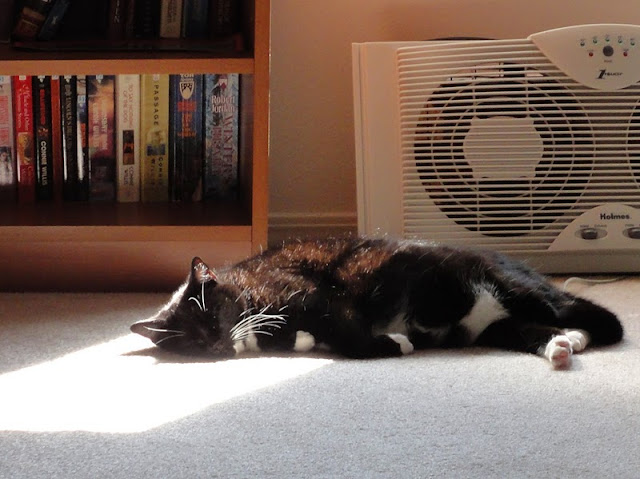 About the second or third day (I know, consecutive sunny days in Seattle, unheard of!), she figured out the routine. She appeared at the window before I'd even gone to it and stood there, little nose poked out and eyes half-closed, awaiting that magical moment when Mommy would let Mr. Sunbeam in. And this continued to be her routine most days thereafter. I wish I'd had the camera handy, but the one time I did, she broke her streak. On purpose, I'm sure.

But she did allow me to catch this moment of bliss: 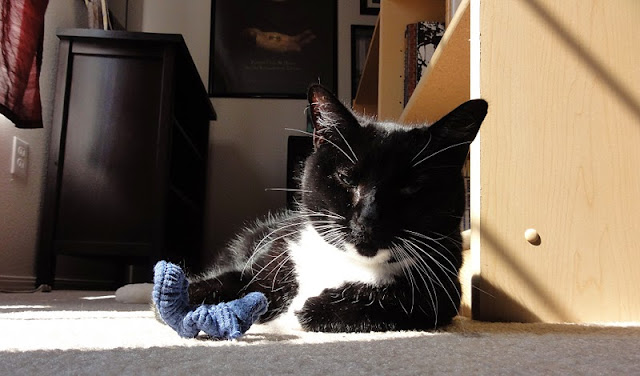 Doesn't she just look smugly self-satisfied? You'd think she was responsible for the fine weather.

You may be wondering about the blue thingy. That's her hair tie. She won't play with cat toys, but for some reason, adores chasing hair ties. She'll even play fetch with them sometimes. And when she's not chewing on Mommy, she likes chewing on them: 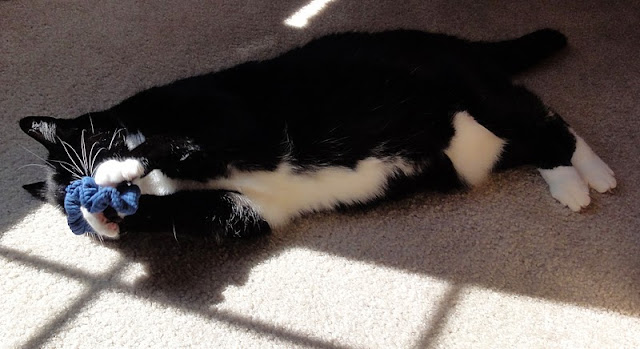 Funniest moment ever was when she started dry-coughing due to a developing hairball, but wouldn't let the hair tie go, so it was dangling from a tooth as she wheezed. She's ridiculously cute sometimes. I try to explain this to friends who wonder why I've kept an animal with homicidal tendencies. They just do not understand the power of her Massive Cute.

During the day, her sunbeam would move, but she'd sleep through it. So when I was home, I'd go back to the bedroom every hour or so and drag her a few inches over. I probably shouldn't have done - this just taught her she didn't have to do a damned thing for herself. No matter. Once the sunbeams had well and truly moved on, she'd amble out through the living room and onto the porch for a nice lie-down in the sunshine with her favorite rocks. So she did get exercise. Of a sort.

I'm looking forward to the winter writing season, but I'll miss these times.
Posted by Dana Hunter at 12:19 AM

There's something so angelic-looking about your cat. I believe you when you say she has homicidal tendencies, but she poses for pics delightfully.