I'm not being facetious. I spent a good portion of Sunday reading the pamphlet for the Geologic Map of the Silver Lake Quadrangle, Cowlitz County, Washington (pdf). And I was enthralled.

There's high excitement in that data. There's a whole history contained in it, over forty million years of oceans, deltas, volcanic eruptions, flood basalts, floods, lahars - enough stuff to keep a disaster buff busy for days. Yes, at a glance, it's couched in dry scientific language. There are words in there I had to look up: I had no idea what they meant, my Greek and Latin are still too poor to puzzle out meanings from roots, and even several years of intensive reading in geology hasn't exposed me to all of the terms. I discovered paludal. I love paludal. Now I know it comes from the Latin word palus, which means "marsh," and so means "sediments that accumulated in a marsh environment." I still think lacustrine and fluvial are prettier words, just as lakes and streams are often prettier than marshes, but who cares if it isn't the kind of word that sparkles as it rolls off the tongue? Think of the Scrabble games you could win!

And I came across an old friend: hyaloclastite. Check this out:


The massive to well-bedded, poorly sorted, mafic tuffs typically consist of angular, commonly scoriaceous basalt clasts cemented by abundant zeolites and yellowish clays. Most of the tuffs are thought to be hyaloclastites generated by phreatomagmatic eruptions.

And I squeed, because I remembered: I've even seen a hyaloclastite. Saw it with Lockwood on Mary's Peak, didn't I? Even got the picture, complete with zeolite, to show ye: 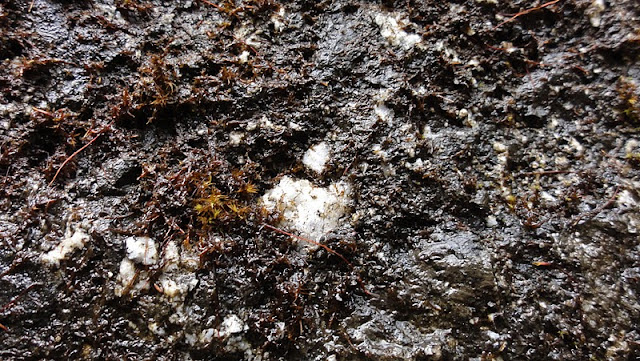 Those white bits are zeolites. The whole mass is probably quite similar to what you'd find in the Silver Lake quadrangle. Hyaloclastites form when lava hits water. Yes, I know, you normally think pillows, and those are what happen when the lava doesn't esplode. But let me refer you to another mouthful of a word: phreatomagmatic. In this case, instead of forming nice pillows, the lava hit the water and basically shattered due to sudden cooling. They're talking about tuffs, as well. Tuff is a rock formed from volcanic ash. So, if I've understood me geology correctly, I don't even have to read on to the next paragraph to understand what happened: lava encountered a shallow-water environment, either due to an underwater eruption or a lava flow into the water source, and that sudden quenching caused it to shatter rather spectacularly.

And now we consult the experts:


In some localities the clastic beds appear to grade upward into massive basaltic andesite flows, suggesting that the phreatomagmatic eruptions were triggered when subaerially erupted lavas flowed over water-saturated sands, probably near or at the late Eocene shoreline.

Now we're cooking with geology! (Incidentally, you can cook with geology: you will need a chicken, banana leaves, a shovel and gloves, some seasonings, and 2000° F fresh Lava.)

The whole pamphlet is filled with such things (sans recipes). We learn about ancient shorelines, meet up with our old friends the Columbia River Basalts, witness the birth of Mount St. Helens, and discover that this is a horrible quadrangle to site your house in if you don't want it bulldozed by a lahar. Reading this pamphlet was like parking the TARDIS and watching 40 million years of subduction zone antics unfold: when you began, you had a nice oceanfront view. Then came the eruptions, and the marshes, and continents colliding, and flood basalts, and the incredible violence of the Cascades' birth. I got so wrapped up in it that when it came time to stop and call my best friend, I became upset.

Who would have known reading the documentation for a geologic map could be so damned fun?

But that's geology. It's a very accessible science. Learn a little of the lingo, get a general understanding of how things work by reading excellent pop sci books and palling around with geologists, combine that with Google searches for unfamiliar terms, and you can enjoy the source material. You don't need years of college education. You don't need calculus. You'll run the risk of coming away with a burning desire to go traipse around the countryside and take a petrology class, yes, but you can understand this stuff. You're not reading a science paper so much as a story, one that begins in the middle of things and is still going on right at this moment. And did I mention, explosions!

If you can't get excited by all that, I have very little hope for you.

Bonus delight, here's what I saw when I Googled "hyaloclastite":

That's our Lockwood, that is! I'm not sure when Google started doing this, or how it works, but that's actually pretty awesome.
Posted by Dana Hunter at 12:14 AM