My Volcano Phobia is Officially Pining for the Fjords

We would have ended the summer adventuring season with a bang if Mount St. Helens had been so kind as to erupt.

I used to have a bit of a volcano phobia. I'd have nightmares of majestic mountains suddenly exploding, threatening me with pyroclastic flows and hot red lava. I remember those dreams: tense, terrified sequences that sometimes began with the first jets of steam and ash from an unexpected eruption, sometimes picking up in mid-drama as I tried to gather cat and loved ones and flee. There was a dream where I lived in my childhood home again: the Peaks were putting on a spectacular show outside the sliding glass doors, lava bombs and ash falling all round, hot bits of volcanic ejecta setting off massive forest fires. Lava flows once chased me all the way from Flagstaff to Phoenix, melting the car's tires and cutting off escape routes. I'd wake up exhausted, heart pounding, eyeballing the nearest mountain for the slightest sign of unrest. I'd run through evacuation plans in my mind and check the news (at the time, rumor had it the ground around Flagstaff was rising by an inch a year, and I believed there was a magma chamber filling up below the mountains). I'd watch teevee shows about eruptions and consider that the oldest volcanics nearby were less than 1,000 years old. The volcanoes were sleeping, not dead, and I was ready: if they so much as twitched, I'd be outta there like a shot.

I never ever in my entire life wanted to see a volcano erupt live. Not even the tame little Hawaiian ones. Nossir. I'd take my eruptions on teevee from a safe distance of several hundred miles, thanks ever so much.

So what did I do? Moved to a subduction zone, where things regularly go boom. My stepmother laughed at me. But as I told her, they monitor these things intensively, and the moment one of them woke, I'd be on her doorstep with cat and suitcase in hand.

I never would have gone to Mount Saint Helens the first time if I'd known she was, actually, erupting. And I would have fled if I'd realized the pretty wisps of steam emerging from the dome weren't merely residual heat, but active dome-building. The parking lot was filled with scorch marks from hot rocks falling from the sky. And I was damned glad we'd brought the fast car - if it looked to be an eruption, we'd be so outta there.

And we got home after a hell of an experience, and I looked some things up, and realized I'd stared into the heart of an erupting volcano, one that had violent tendencies, and nothing bad had happened.

Still, I'd run, wouldn't I? If I saw her start to blow, I'd surely scream and run away.

Then I started studying geology.

And then I went back.

And found myself disappointed St. Helens is sleeping.

The scorch marks in the parking lot are faded now. The dome isn't steaming. The seismometers on her slopes are quiet. And I wished she'd wake up. I wished she was busy dome-building again. I wished I could stand on the viewing platform at Johnston Ridge and watch her put on a show. Not a big one, mind, but just a little something for the kids. Cujo and Steamforged had never seen her in person before. I had the new camera. C'mon, girl, just a little plume for your old buddy Dana. I wrote you a get-well card when you blew apart in '80, remember?

No such luck. But it doesn't matter if she's erupting or not - she's still spectacular. The blast zone is still a virtual moonscape, despite all the wildflowers and alders. You just don't get to see bald slopes and deep, wild erosion in western Washington. There's nothing like a VEI-5 eruption to clear away all that pesky biology.

We took the long climb from the parking lot to Johnston Ridge Observatory. At first, the ridge hides the mountain. She peeks at you, gradually comes into view, and you almost don't notice because you're goggling at the downed trees and nearly-naked slopes of the blast zone. 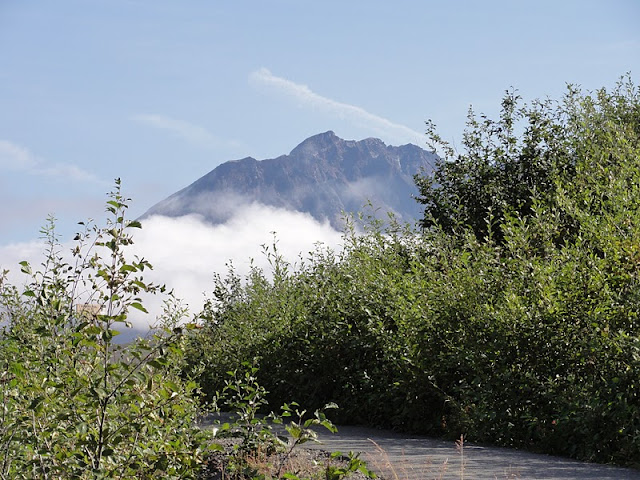 Note the biology starting to get all uppity. I think we need another VEI-5 to teach it a lesson. Yes, it's pretty; yes, that's how western Washington's supposed to be, but damn it, it's beginning to block the geology views.

And yes, that's a bit of the crater rim rising above the bushes. Stick with me. A few more feet of climbing, and you'll see views.


Reach the top, stand on the shoulder of the ridge, and gaze into the amphitheater left by the 1980 eruption. After you've managed to unstick your awestruck feet, walk toward the Observatory. There's another rise, and nestled at the base of that rise, facing the mountain, a monument. 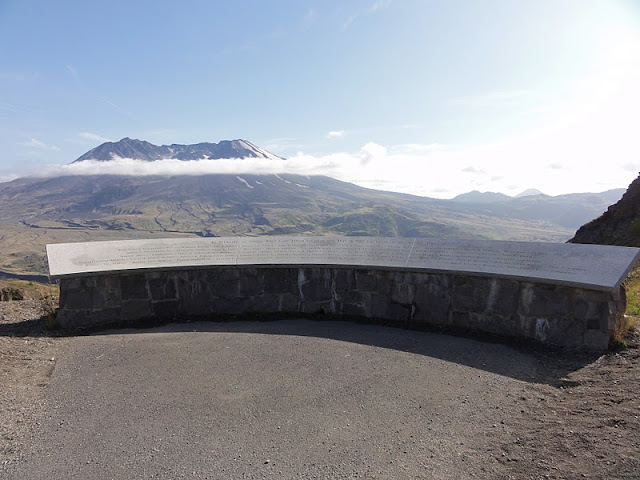 The names of the dead are chiseled in black against the gray stone. Mount St. Helens killed, because we didn't understand her. We didn't know quite what to expect of her, or where the safe places were, or took risks for science, or adventure. Harry Truman stayed in his cabin with his cats, too old and too stubborn to flee his beloved mountain.

David A. Johnston died on this ridge. He had time for one last radio transmission: "Vancouver! Vancouver! This is it!" I don't know how much time he had to realize he wasn't getting out. Two miles to the north, also directly in the path of the blast, ham radio operator Jerry Martin knew what was coming: he'd just seen David Johnston die. "Gentlemen, the uh, camper and the car sitting over to the south of me is covered," he said in his last transmission. "It’s gonna get me, too. I can’t get out of here."

You can hear David's last words, in a film at the Observatory named for him. And after the movie, the screen goes up, the curtain rises, and there she is. 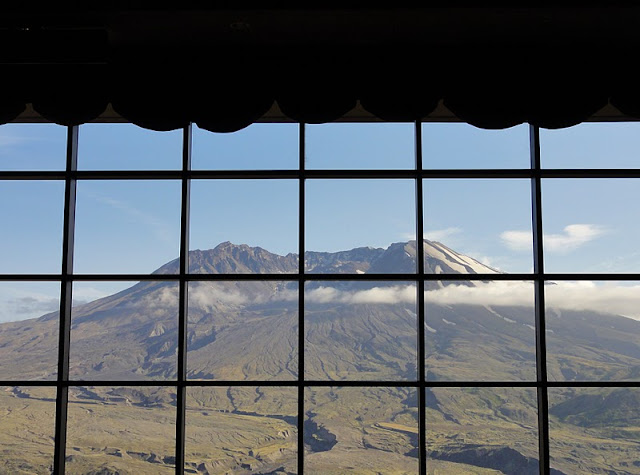 Stand there for a moment of silence, then go on.

Inside the Observatory, they have some pretty outstanding displays. They've got a huge scale model that lights up, illustrating various phases of the eruption as a narrator speaks. 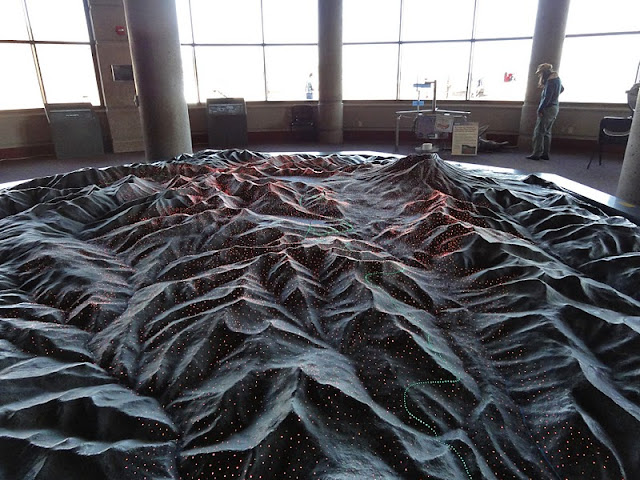 This one, I think, was showing the pyroclastic flows. 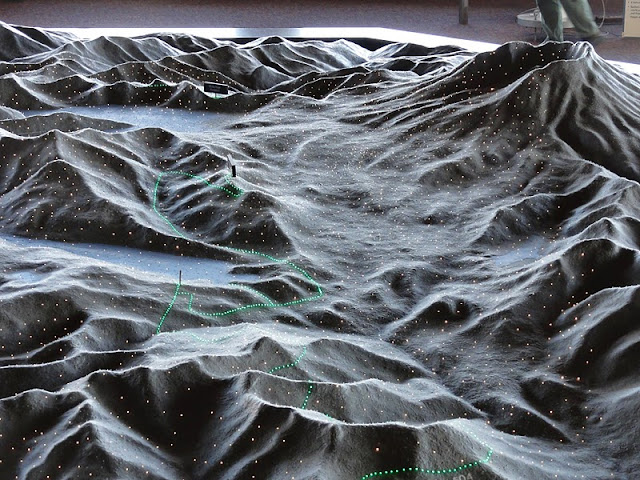 And some of the lahars: 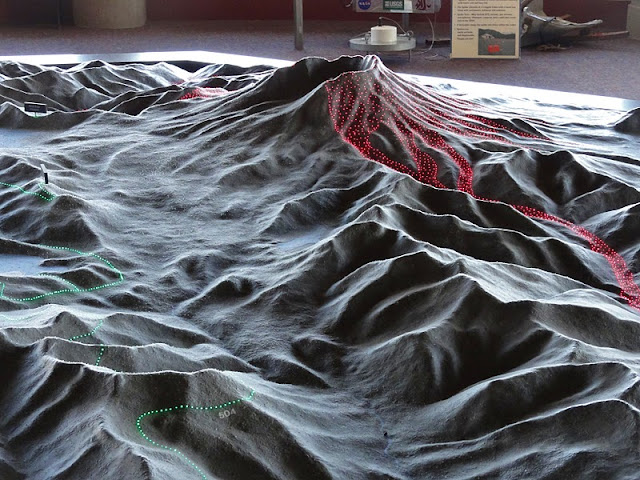 I have a terrible feeling lots of folks have walked away thinking St. Helens spewed rivers of molten lava, but oh well. I wasn't paying that much attention to it, aside from ooing at the sparkles. No, there was another thing there that demanded attention: a display that you could put your hands on to "feel" earthquakes and other seismic events, with a screen showing you what the seismometers had picked up (running elk, helicopter landing, rock breaking, landslide, various earthquakes) and the thing would shake and shake. This, I have to tell you, could keep a person occupied for hours. Wish I had thought to take a picture, but I was too busy playing with it.

Outside in the Plaza, there's one of those USGS markers I love so much: 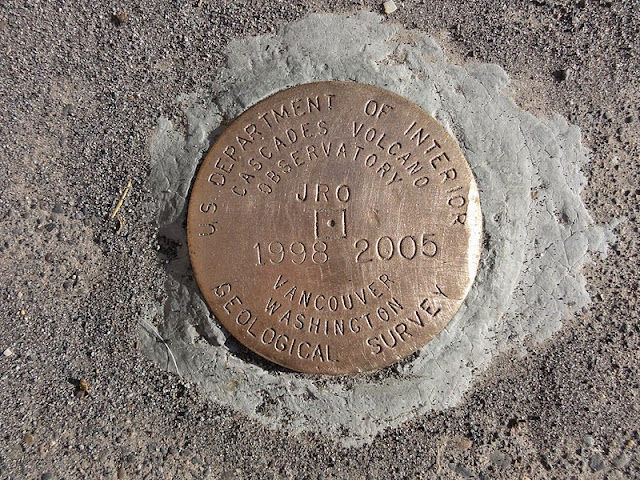 We stayed for the ranger talk, which I'll be writing up, and then headed out. One last look back: 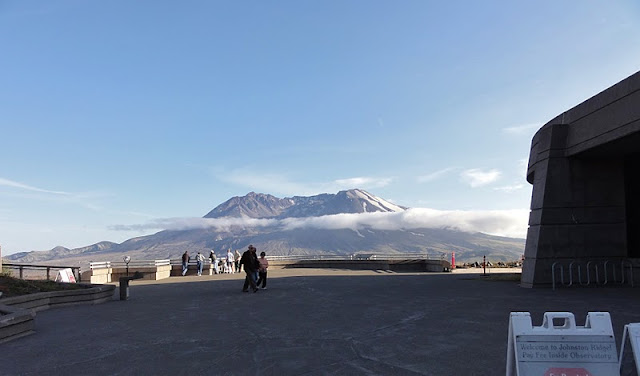 And then on down to a viewpoint overlooking Castle Lake, where the late evening light and several enthralled people compliment the mountain perfectly. 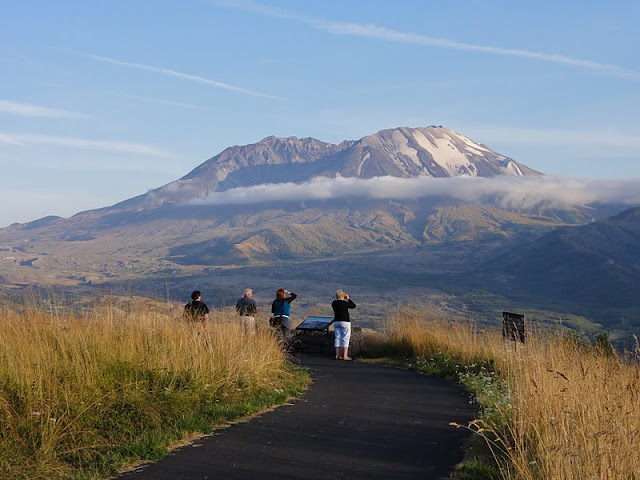 And with that, the summer adventuring season is well and truly at an end. Good thing, too. I've got so much geology to write up I'll probably still haven't have gotten it all by the time next summer rolls round.

Ending it here, with the mountain that introduced me to the splendid power of volcanic eruptions at the tender age of 5, seems fitting. Mount St. Helens has been part of my consciousness for nearly the entire span of my memory. She was the most spectacular event of my childhood. She's become a part of me, she and the people who were caught up in that day of catastrophic destruction.

She'll likely put on another eruptive display before I die, and unlike me, she won't grow old. She'll constantly be tearing herself down and building herself back up, long after we are gone. There's something very nearly timeless in that, although she's not eternal. She's a moment in geological time. But what a moment she is!
Posted by Dana Hunter at 3:45 AM

There is a town here in the Eifel mountains - Bad Berlebach - which nestles inside the caldera. Needless to say, it is famous for its natural thermal baths...

Dana,
next time you're at the Johnston Ridge Observatory, leave flowers. He deserves our continuing recognition.

Commented to an IZ friend the other day, PNW gets volcanic eruption once in a century, major eq once every 3-5 centuries. E & S coasts have hurricane season every year, and it lasts 5 months. Blizzard season is shorter, but even nastier.

I'll stick with our volcanoes.