There's rain in our forecast for the weekend, which means I can probably forgo further adventures in favor of catching up on some of my geology homework.  I mean, we haven't even gotten to hug Oregon geology yet, not to mention all the other stuff in the queue.  And there's outtakes from this trip to select and share.

Let's get a bit of a jump on things, then, shall we?  We'll combine a few outtakes with a desultory bit of geology, beginning with moi standing on the rim of a cirque: 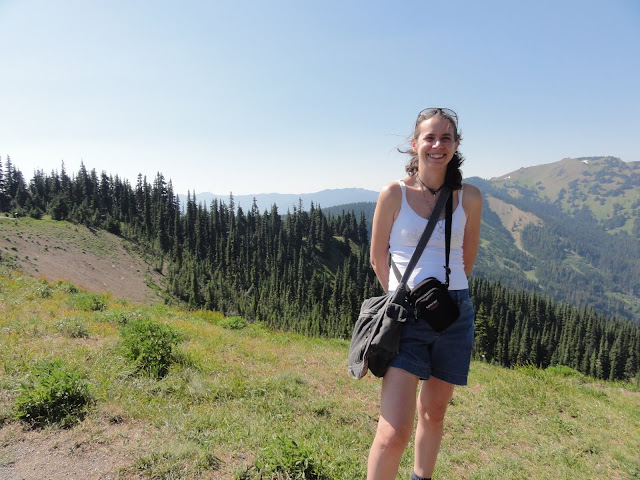 There's also a baby cirque (or possibly a landslide scar) just over my left shoulder, there, and Hurricane Hill right beyond.  I love the West!  Where else in America would an elevation of 5,757 feet be considered a hill?

So anyway, no shit, there we were, standing right on the lip of a cirque.  It was too big to get all in one shot until we were well along the trail up to Hurricane Hill later on.  Here it is: 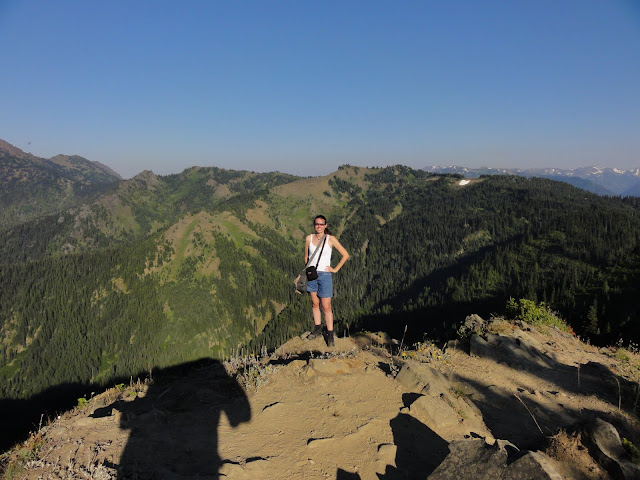 Glacier's long-gone, but snow still persists late into the year in one tiny portion of the cirque.  Cool off the climate by a few degrees, and a glacier might grow there again, deepening and widening the cirque, and carving Hurricane Ridge into ever-sharper relief.  For those who are curious, the Cirque Rim Trail runs right long the top by the snow patch, there.

Along the trail, you can get an excellent look at very slightly metamorphosed turbidites: 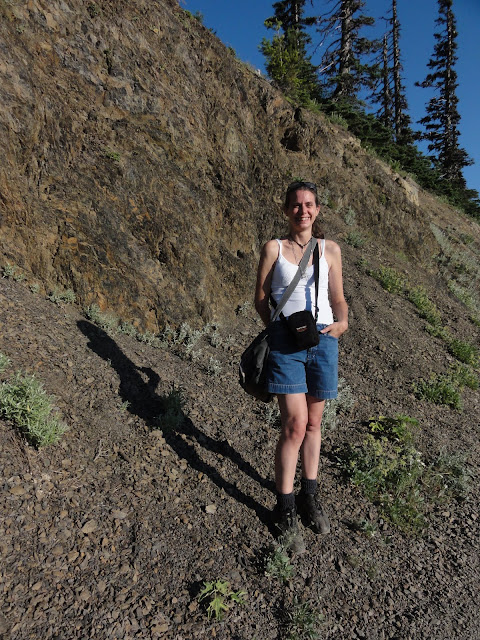 If you think these rocks look like they've had a rough life, you are so right.  They started out as submarine avalanches.  Then, after they'd settled down from that excitement, they got stuffed 10-15 miles down into the subduction zone along the North American plate, folded, spindled, mutilated, and then spat onto the edge of the continent before being hoisted aloft, where they were promptly (geologically speaking) attacked by glaciers.  And they didn't even get the compensation prize of becoming fully metamorphic after all that trauma. They still look pretty much like plain ol' sandstone and shale.  But give them the dignity of calling them semi-schist and argillite.  They deserve some acknowledgment of all they've been through.

Time now to get off the hill (hee, hill) and descend to nearer sea level, whereupon one can stand knee-deep in Lake Crescent, which was carved by the Cordilleran Ice Sheet: 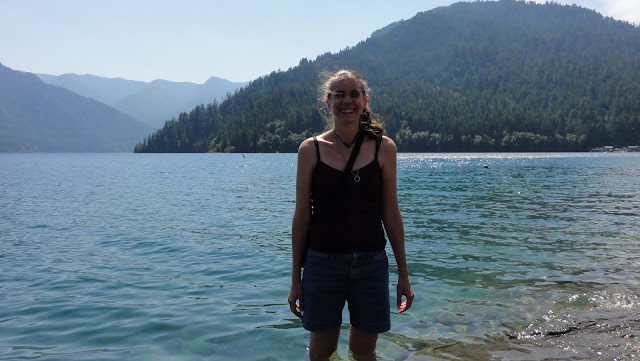 Now, the fact that this is an Ice Age-created lake that is 624 feet deep, blue as can be, and has scenery that might put one in mind of fjords is awesome enough, but you don't have to take my word that it's a glacially-carved lake.  You can just look at the evidence at your feet: 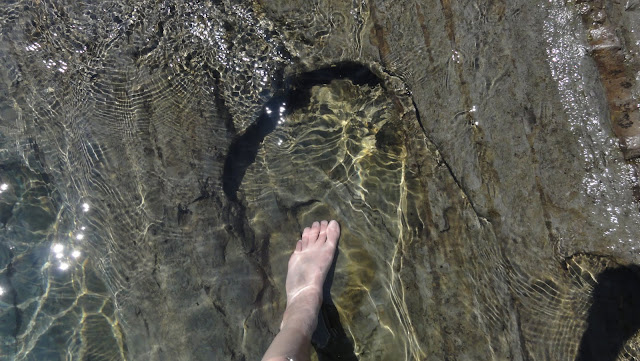 Water has done a bit of smoothing, and wave action has created potholes, but you can see the enormous parallel scratches.  Here's a better look: 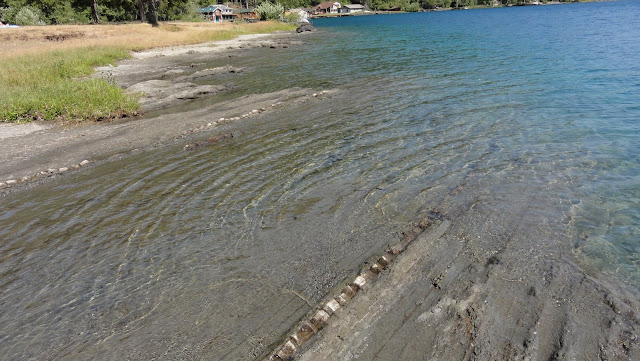 Those gouges were so straight, the resistant, saw-toothed strata so regular, that at first I thought it was the remnant of an old boat ramp or some such human-created artifact.  It looks fake at first glance.  I really wasn't prepared for the immensity and power of what an ice sheet as opposed to a valley glacier can do.  It took close inspection, and noting that the strata disappeared under the bank, but eventually I realized that yes, that really is the result of a ginormous sheet of ice planing everything down to the bedrock, and then grinding the bedrock itself down.  Amazing things, ice sheets.

Late that afternoon, we made it down the coast to Ruby Beach, where you can see additional evidence of what water, this time in liquid form, can carve: 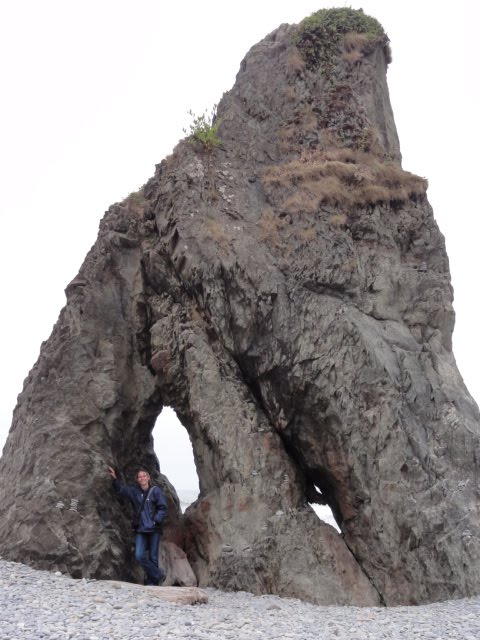 And yes, rumors of a sunny day at the beach were greatly exaggerated by the National Weather Service.  Bloody north Pacific storm systems.  But the cold, misty gloom didn't prevent us from enjoying the lovely sea stacks, which here are easily accessible even when the tide's coming in.  You all got plenty of exposure to sea stacks when we were kicking around Ecola State Park a while back, but these are special - they're not basalt, but sandstone.  Here's a good closeup of it that would've been even better if I hadn't managed to change the camera to the lowest quality picture setting by accident and without noticing: 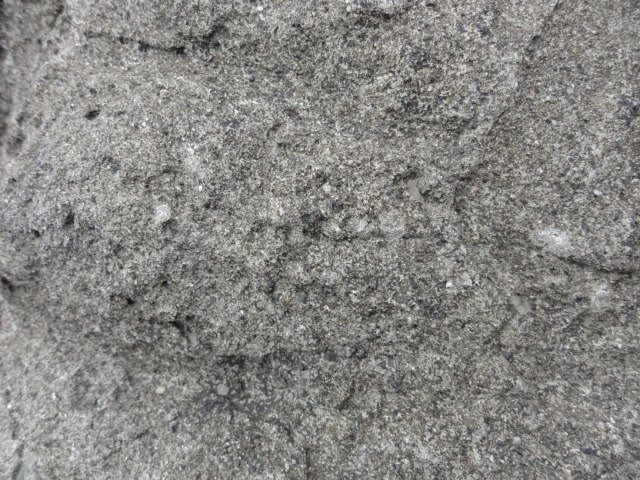 See?  Sandstone!  I found that fairly awesome.  Did a double-take when I realized I wasn't looking at basalt.  Even more exciting: I have finally touched undisputed graywacke.

Yes, I get excited over rather odd things.

Abbey Island, on the other hand, is composed mostly of mixed volcanic breccia and sedimentary rock, cooked into a hard whole by heat and pressure, with a healthy coating of sand and gravel on top: 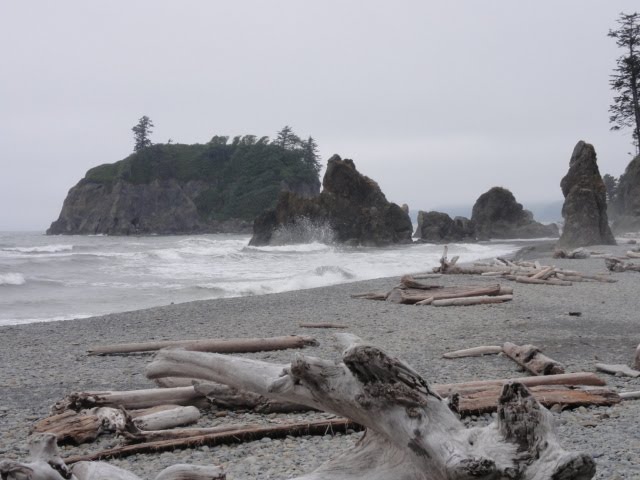 We're talking about a rather dramatic change in rock types in a matter of a few hundred feet.  This is definitely an interesting suite o' rocks, and I shall enjoy delving deeper into their history for ye olde upcoming in-depth post on ye geology of Olympic National Park.  Which I shall have to you sometime in winter, after we've caught up with Oregon and Eastern Washington.

And everybody raise a glass to my long-suffering intrepid companion, who braved mosquitoes and freezing cold without a jacket in order to act as my personal photographer.  Then he did all the driving on the way back, without complaining, even when the CD player crapped out and I dozed off.  There should be a medal of valor for all that, not to mention endurance medals for all of you who've waited so patiently for me to get around to posting something of substance.
Posted by Dana Hunter at 3:48 AM