I Want a Ranch. With Horsies. In the Cascade Foothills.

My Intrepid Companion and I ventured forth despite threatening clouds on Monday.  I've been shut in with the Muse for months now, aside from occasional local escapes, and since my hormones had knocked her over the head and stuffed her in a closet, bound with duct tape and zip ties (bit of overkill, there, but it's a bad hormone month), this seemed like a bloody good time to do more than retread the same ol' ground.

Besides, I had a hankering.  I kept quoting Bilbo: "I want to see mountains again, mountains!"  So we headed east.  I'm only half an hour from Monroe, where one can begin to see evidence that something massive's happening to the continent.

You go from the roly-poly drumlin-riddled and glacial-deposit draped lowlands up a very gentle grade, and then suddenly there's a road cut with solid rock in (which, alas, I didn't get a chance to stop and photograph), and then a little past that you reach Monroe, where, on a day with fewer clouds, you can actually see the Cascades.

Even on a day with clouds, you can drive down little country lanes there and see what we call "foothills." 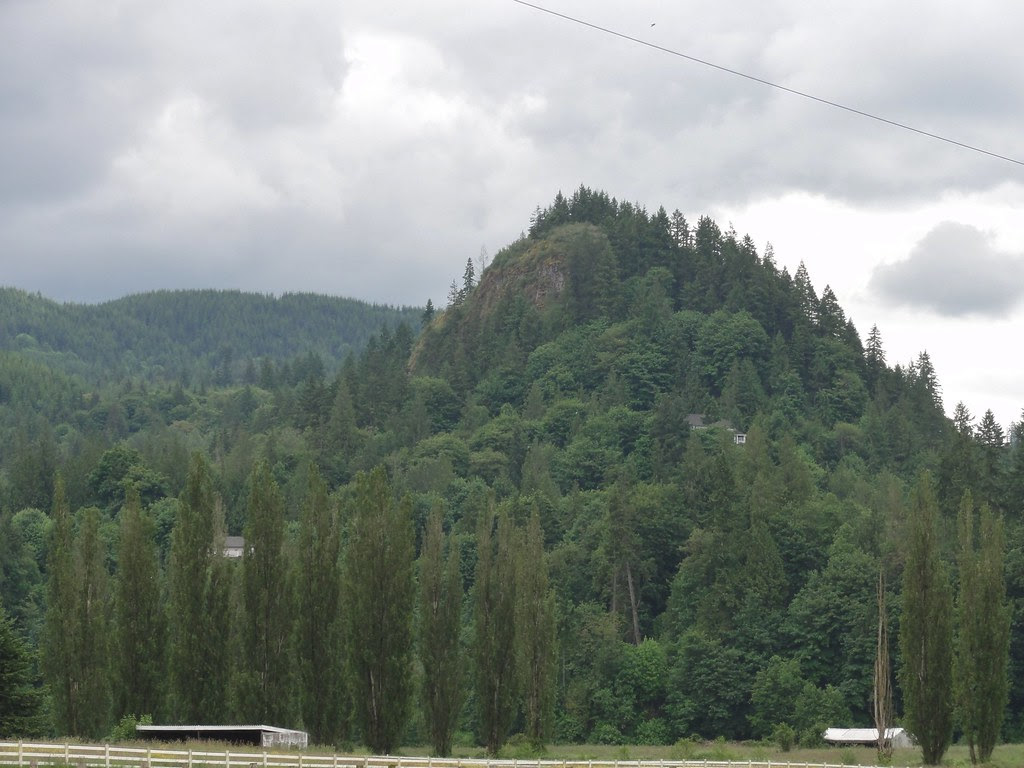 Some foothills, right?  There are places in this country where those would loom over the local mountains like a basketball player over moi.

I like this foothill.  I have no idea what its name is, but it looks vaguely South China karst landcape, what with that conical shape and all the greenery.  Mind you, it's not karst.  Not sure what it is, but it's most likely volcanic, perhaps even a bit scraped off the ocean floor and plastered to the North American continent.  I'll look into it and get back to you.  In the meantime, I want you to follow me after the jump and live my dream.


You see, I have decided I want a ranch.  With horsies.  In the Cascade foothills.  It's so lovely and peaceful, and the mountains make such a delightful backdrop to the horsies. 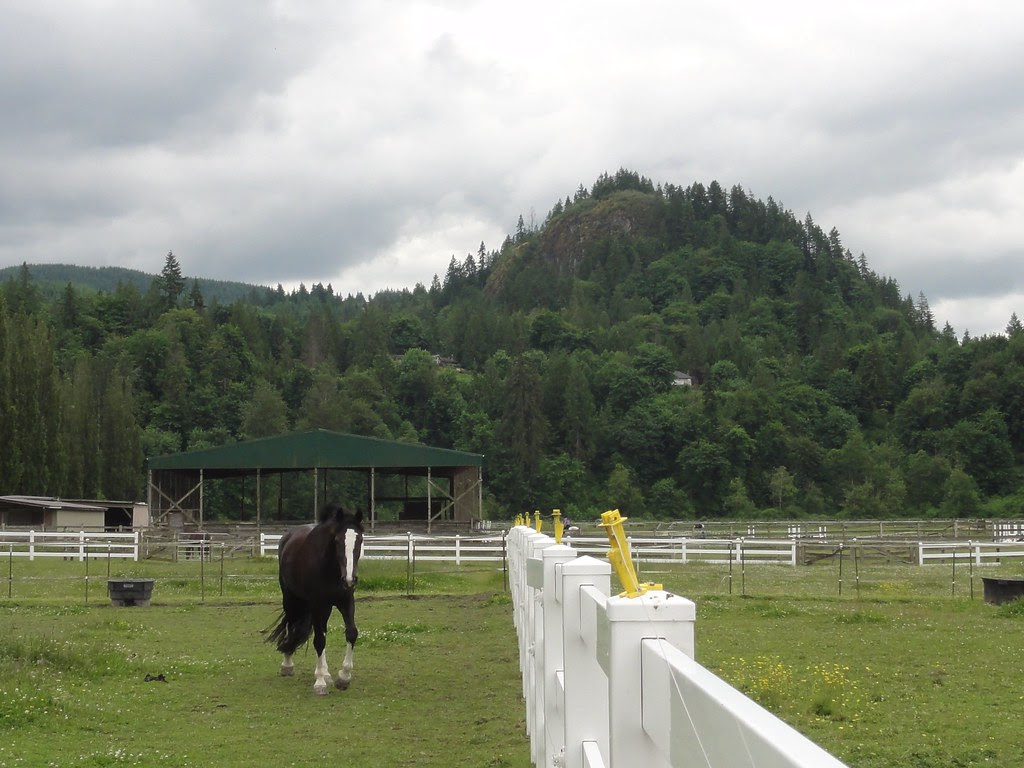 I liked this one a lot.  He, or she (I didn't bend down to look) was a friendly little bugger.  Made a beeline over to us to say "Hey, hello, got any treats hidden away somewhere?  No?  No matter, pet me anyway!"  And so I did.  Which reminded me how much I miss having horses in my life.  I need to work on this whole riches-and-fame thing so I can have one or two. 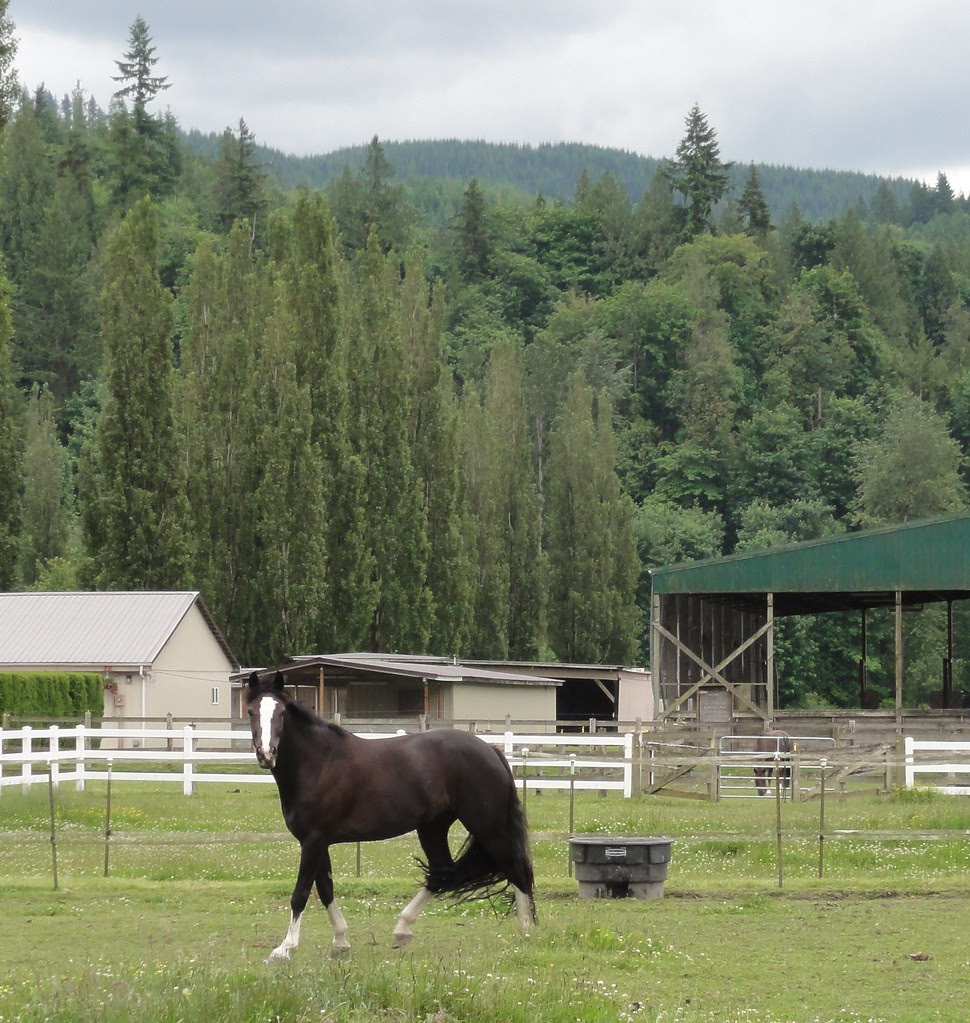 One very much like this one, actually.  A beautiful baby with some pizzaz and a liking for people.

What's that?  You've had enough horsies?  You want rocks?  Okay, right, here we are, then: 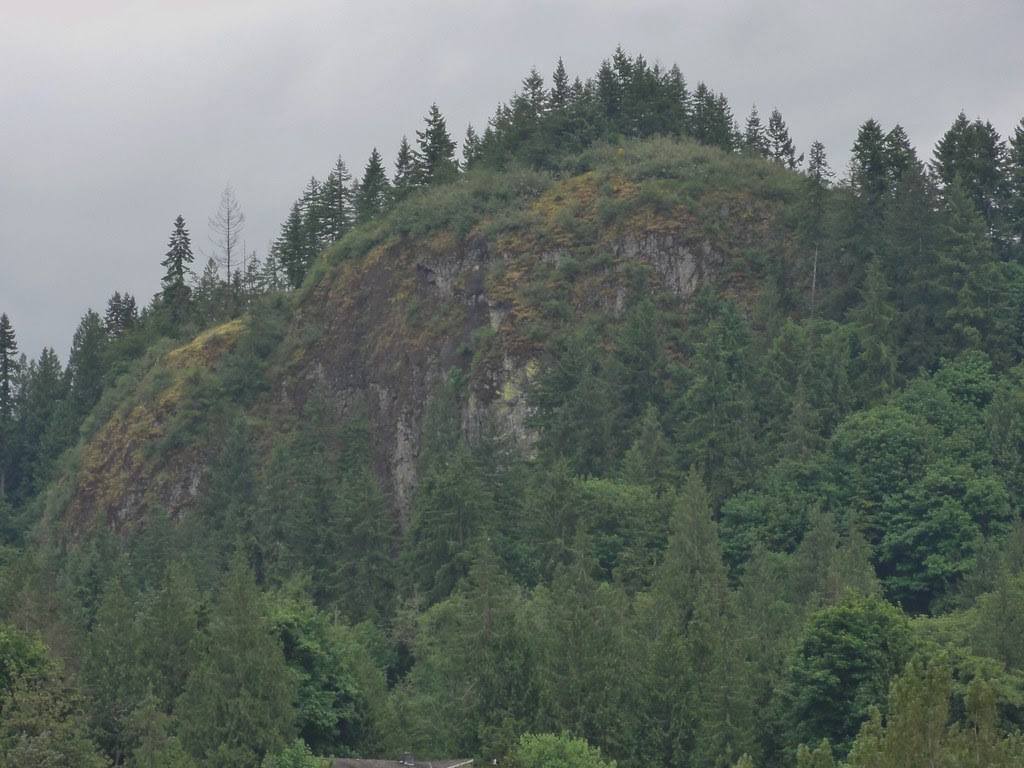 There's a nice close-up of the cliff on the "foothill" for ye.  I know, I know, there's a lot of biology in the way, but you have to admit, it's wonderful, the way the cliff laughs at all that lovely green.  Like "Ha!  See if you can hide me!"

I'll even give you rocks and raptors: 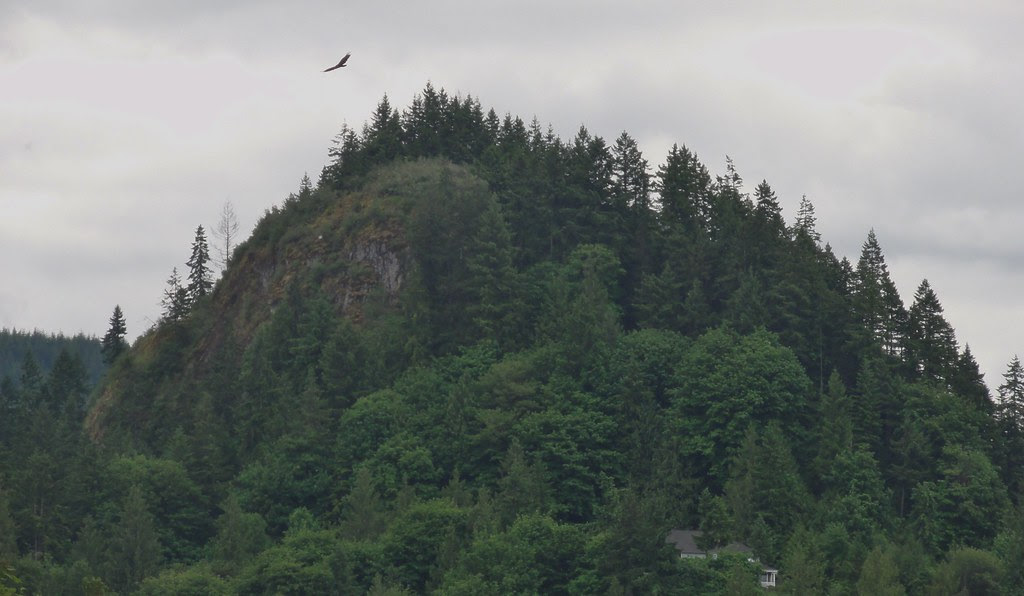 Okay, admittedly, that is a raptor.  But I swear to you there were three there just two seconds before I got the camera aimed.  Little buggers buggered off as fast as they could fly, didn't they, but this bugger was too slow.  And so we have a nice eagle (I think) soaring over our lovely rocks.

Speaking of rocks, oh, my darlings, just you wait until you see what I've found for you.  We've got a river for Anne, with lots of amazing erosion, and sediments for Karen.  I've got new bebbes that will make you drool.  Pretty rocks that may be just what Evelyn needs.  And one of the most incredible boulders I've ever had the pleasure to squee over, which is going to require Callan to get to the bottom of.  I've got mountains soaring over raging rapids, and some truly nice gneiss, and confections of conglomerate, and I think we've even got serpentine.  We've got stuff I just have to identify as fuckifIknowite, so hopefully some of you will step in and identify, however tentatively.  Yes, I know what it's like trying to identify from photos, but still.  And wait till you see the folds in some of these puppies.  We're talking rocks that've really been through it.  We're talking subduction zone veterans that have been pushed, pulled, squished and squeezed, put under pressure, had their metaphorical feet held to the metaphorical fire, been chewed up and spit out, and basically demonstrate to even the casual geology buff how intense it gets out here on the edge of colliding continents.

And the schist.  Holy shit, the schist I found...

I've got flowers, too.  Bleeding hearts and lupines and others, oh, my.  Not to mention a double-winged dragonfly.  So stay tuned.
Posted by Dana Hunter at 12:10 AM

squeeee... i can't wait to read it

Can't wait to see the river.

And, gosh, I miss the mountains. The sedimentary rocks of the midwest have their charms (when they outcrop), but I needs me some real mountains. Or volcanoes. :)

Dana, here's a blogger you have to add to your regular reading: http://geologicfroth.com/

and my sedimentary favorite:
http://geologicfroth.com/sweet-san-juan-river-flood-deposits

Going from information that I've had to correlate from three different map sources, that appears to be High Rock, which is 122 m high.