I'm sure I've mentioned this before, but my own ignorance drives me crazy.

That's really been driven home these past couple of weeks, in a few different ways.  There's the research I've been doing for Nyaanovos, which has occasionally caused me to scream and yank out hanks of hair.  Ron mentioned that Mediterranean geology is a mess, and he wasn't wrong.  What a hodge-podge!  It's like somebody took a sledgehammer to that region while other people were busy cramming it together and another few teams, all at cross-purposes, were trying to pull it apart.  And I know it makes sense.  It's just hard to make sense of it.  There are people who've dedicated their careers to teasing some order out of the mayhem, and the work is ongoing.  We've got bits of the puzzle sorted, but nothing approaching the whole.  And there are times when I wonder what possessed me to stick a region like that on Xtalea, rather than staying with the simple stuff.  But simple doesn't lead to fantastic landscapes suitable for awe, so forget simple.  We'll go with complex, and curse our ignorance every step of the way.

Then there was the little day trip we took up the Skykomish River.  Just one single afternoon.  Just a few pretty pictures.  Okay, around 500 pretty pictures, but still.  Quite a few people would be content to exclaim over the scenery and pick out the really nice ones and put them up with a few words about how pretty the region is.  Me?  I've got to know.  My ignorance of the place drives me crazy.  I want to know how the river works, where it comes from and where it goes and how it behaves.  I want to know where all those interesting rocks came from, and what they are, and how they got to be so interesting.  I want to tie everything together with what I know of all the terranes that got stitched together to create Washington, and I want to understand how subduction made the Cascades rise, and why things are the way they are.  I want to know what the flowers are, and what their lives are like, there on the banks of a mostly untamed river.  Someday, I might go beyond identification into evolution, because knowing how they got to be what they are fascinates me.

I don't understand how people can stand not knowing.  I have no idea why some folks can look over a landscape and think, smugly, that God made it and that's all they need to know.  And I have absolutely no idea how they can stand beside a wild river and think they can rule it, or have the right to.  Beside that river, I feel nothing but humility and respect and delight and awe.  Imposing my will on it is a laughable concept.  Understanding its origin and moods, knowing how to live peaceably beside it, those strike me as good things to know.  Knowing how to break its spirit, believing it was put there for my benefit, those things aren't so good.  And living in ignorance of it, that's just tragic.  Especially if said ignorance leads you to believe you can live in one of the flat bits beside it without getting your ass flooded out.

So I'm grievously ignorant of Mediterranean geology and local geomorphology.  That's okay.  These are things I can come to understand, in time, and with help from my geotweeps, books and the intertoobz.  But there are other regions of ignorance that hurt me worse, because I can't even begin to shake them.  Not yet.  I'm reading a book on crystals right now, one written by folks at MIT, 100% woo-free.  And they're talking about concepts I can't get my mind wrapped around.  I am appallingly bad at imagining in the abstract, so when they go on about imagining the ideal crystal and then start spouting geometry, I'm lost at sea.  My ignorance of chemistry is abysmal, as well, despite the wonderful book I just read on that subject, and it's painfully obvious I don't know nearly enough.

So why even bother with it?  Because, damn it, I need to know.

Even if I gave up writing tomorrow, never set down another word on book or blog, I wouldn't stop learning.  It's passed a point of no return now.  The pleasure I get from knowing something real about the world around me is just too great to give up.  The world is so much richer with the things I know.  I don't know much, but I know enough to know that knowing more will leave me staring at the most ordinary things with my mouth wide open in wonder, laughing at the magnificence of it all.  Chemistry and physics and geology and biology, all of these things come together in sometimes incredibly unexpected ways to create the most joyous little tableaux.  I've got a bit of sandstone full of fragments of fossil plants that I picked up while journeying with Lockwood last summer that combines all of those things.  I can hold four disciplines in my hand.  It's just a chunk of dirty brown sandy rock with dark bits of unidentifiable plant matter in.  I mean, look at it - it doesn't look like anything special, does it? 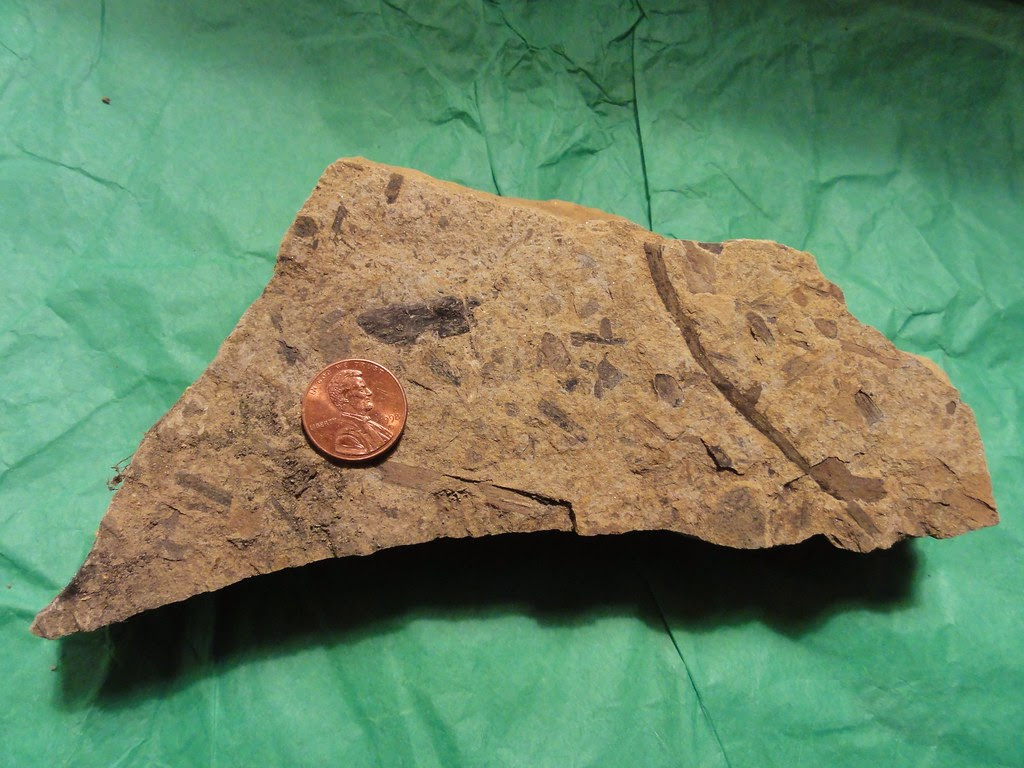 But this is outstanding.  It's an incredible little rock, a bit of a turbidite.  An avalanche happened under the sea one day, and a slurry of rock and sand and mud and plant fragments all went sailing merrily downslope, came to rest, and as time went on, got compressed into stone and hoisted up on land, where a wondering layperson got it pointed out to her by someone who knows more than the Dick-and-Jane version of how it came to be.  Lockwood can explain it properly.  I can't, not just yet, but I know enough about it to know that when I hold it in my hand, I've got a whole story representing several major branches of the physical sciences.  This little bit of stone has a very interesting history.  And if you look, really look, at it, get your nose right in and study it: 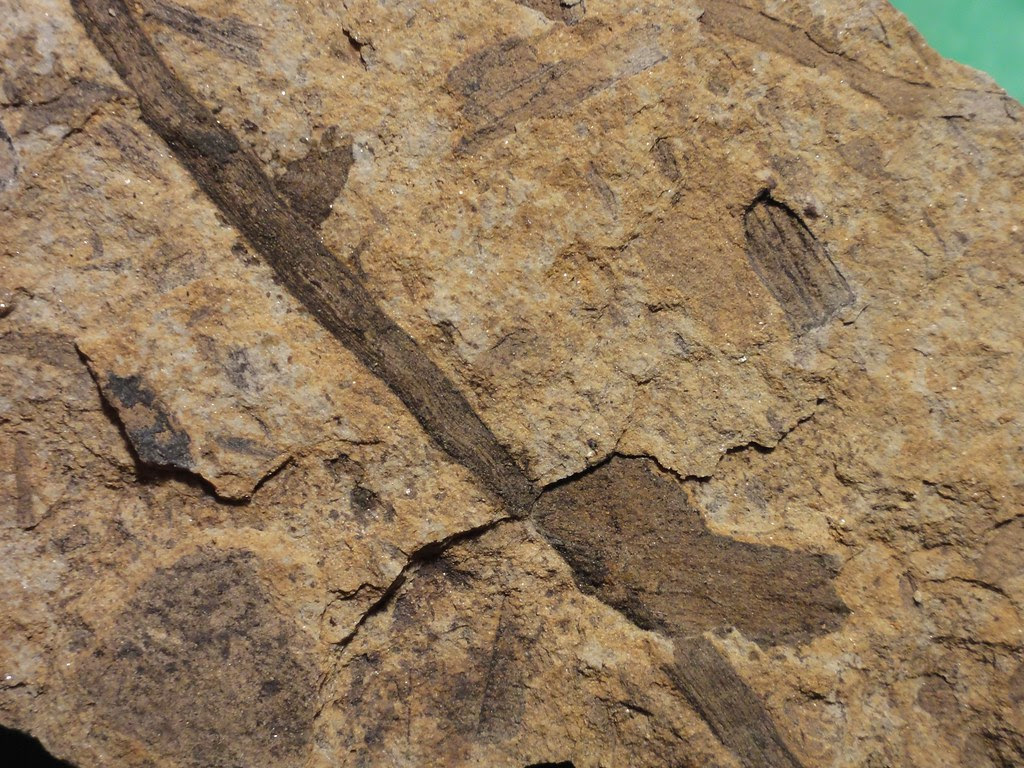 It's got a lot to say.  It's talking about erosion, with all of those lovely sparkly bits of mica mixed in with the more prosaic sediments, all of them eroded from parent rock long ago.  It's speaking of a plant community living by (or in) the sea.  And it's talking about a big shakeup, one day, maybe an earthquake or maybe just too much sediment deposited in one place, and gravity pulling it down into the deeps, and how the dense current of sediment-filled water settled down and deposited its load in a graded bed, heaviest stuff first, because that's the way physics works.  It's talking about chemistry, both biological and inorganic, and pressure and time.  It's talking about upheaval, and plates colliding, and about how you can stand on dry land and still be standing on the floor of the deep ocean.  It's a voice from deep time.  I don't understand most of what it says, but the little I do understand fascinates me.  I want to know more.

This is why I won't waste my time on woo, why I don't sacrifice precious moments to a god that's distinctly surplus to requirements and obviously imaginary to boot.  I was religious once.  For a while, I believed in god, and I thought the world was wonderful because it was his, but when my faith ebbed away because the nonsense of it all became blindly obvious, when I turned from religion to science, that religious awe palled.  Religion never made the world anywhere near as awe-inspiring as science can.  It was an empty wonder, polished brass and a glass bauble someone tried to pass off as a diamond ring.  It didn't even have the benefit of imagination, because others had done the imagining already and all that was left was dogma.  It pretended to be real, but had nothing to do with reality. Thank reason I wasted only a tiny proportion of my life on it, because there's too much of the real world to know, too many wonders I would have missed if I'd stayed faithful.  And I know that some people manage to have faith and enjoy science, but looking at science through faith seems to me too much like trying to get a clear view of something majestic while peering through the bottom of a poorly-made glass bottle.

It frankly amazes me that some people never bother looking at all.

I don't know how to end this post, because there is no end.  No end to the things I need to know.  No bottom to the chasm.  I'll spend the rest of my life pouring science and philosophy and history and other bits of knowledge into it, and it'll never fill.  I can't say I'm empty - some days, I feel like I'm filled to bursting, but I'm never sated.  There are moments, like those pauses between courses, when I can savor what I've just had, but soon I've got knife and fork in hand and I'm watching the dining room doors eagerly, salivating as I anticipate what's coming next.  It's the best kind of hunger, this hunger to know.  It's such a sweet starvation.

And the best part, the absolute most sublime bit, is that even if someone invented an implant that allowed the whole of human knowledge to be loaded into my brain, so that I instantly knew the whole of every science, I'd still have so much more to know.  I'd still have that need, because we don't know it all.  Fill me up right to the cutting edge of science, and it would be barely a drop.  Give me a hundred lifetimes, and there would always be something new.  So many discoveries, so many frontiers, some we probably don't even know are there but will have us screaming with joy when we find them out, all out there, all waiting.

We'll always need to know.  And this universe, in all its immensity, will always ensure there's something more.
Posted by Dana Hunter at 12:42 AM

That was more beautiful than anything anybody will hear in certain buildings this Sunday morning.

I think tishairwin nailed it. This is a lovely, thoughtful reverie.

As for the proximal motivation, Mediterranean tectonics, my suspicion is that you would benefit from standing back from specifics and reading up on the general framework of terrane analysis. Here's an abstract to get you started: http://www.jstor.org/pss/53671
Note the spelling, "terrane." Google will try to "correct" it to terrain.

We can spend some time discussing it when we go field tripping!

Very well said - I'm glad I stumbled on to your writing. As I geologist, I have many of the same ideas. Thanks for feeling, caring and sharing.