ZOMG, my darlings, Neil was here.  I last saw him ten years ago, and I'll tell you something - aside from the beard, he hasn't changed.  He's still the warm, wonderful, blisteringly funny and deeply profound writer he was then.  He still has humility without humiliation.  And my god, does he know how to work a crowd. 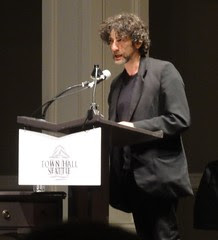 Even his "please turn off your cell phones" speech was hysterical.

The event was recorded, and I'll post that for interested parties when it becomes available.  I'll also have a deeper post delving into some of the things he said come tomorrow.  Tonight's just for the fangirl swooning. 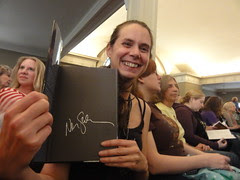 Yeah, that's me holding a signed copy of Whatever Happened to the Caped Crusader?  He signed 3,000 bloody books.  The man is a machine.  Alas, his fame has reached the level at which personal signings would take eight or nine hours, so they didn't do one tonight.  But it doesn't matter.  It's a Batman comic, written and signed by Neil Gaiman, and that is teh awesome.

Speaking of teh awesome, I met an ETEV reader in line there at the venue, and she is genius.  She's just been to Alaska and has kindly agreed to share photos and geological delights from that trip, just as soon as she can.  Something for all you all to look forward to.  I got to see some preview pics, and I think I drooled on her just a little bit.

There were so many people there that they had to start late.  This turned out fine, because Neil had drafted Molly Lewis to play the ukulele for us. 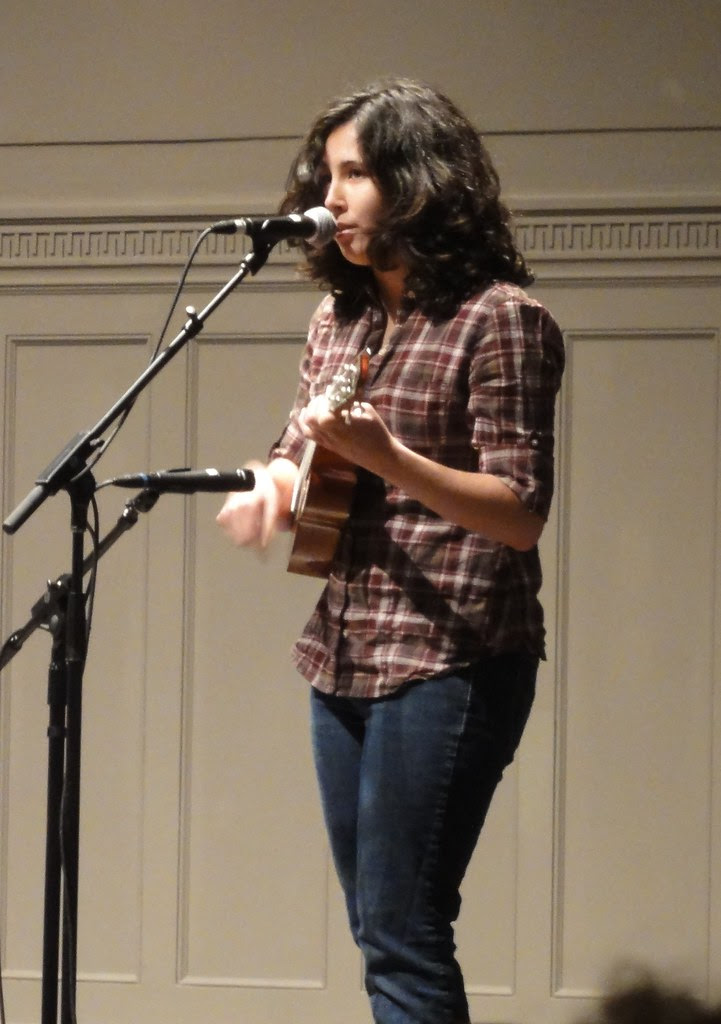 People.  She's amazing.  She did a song on the Lincoln assassination that shouldn't have managed to be tragic and funny at the same time, but is.  And then she performed "An Open Letter to Stephen Fry."  I won't try to describe it.  Just listen:

(Sorry, I probably should've told you to finish any drinks beforehand, huh?)

I can't think of a better opening act for Neil Gaiman.  Set us in the proper frame of mind. 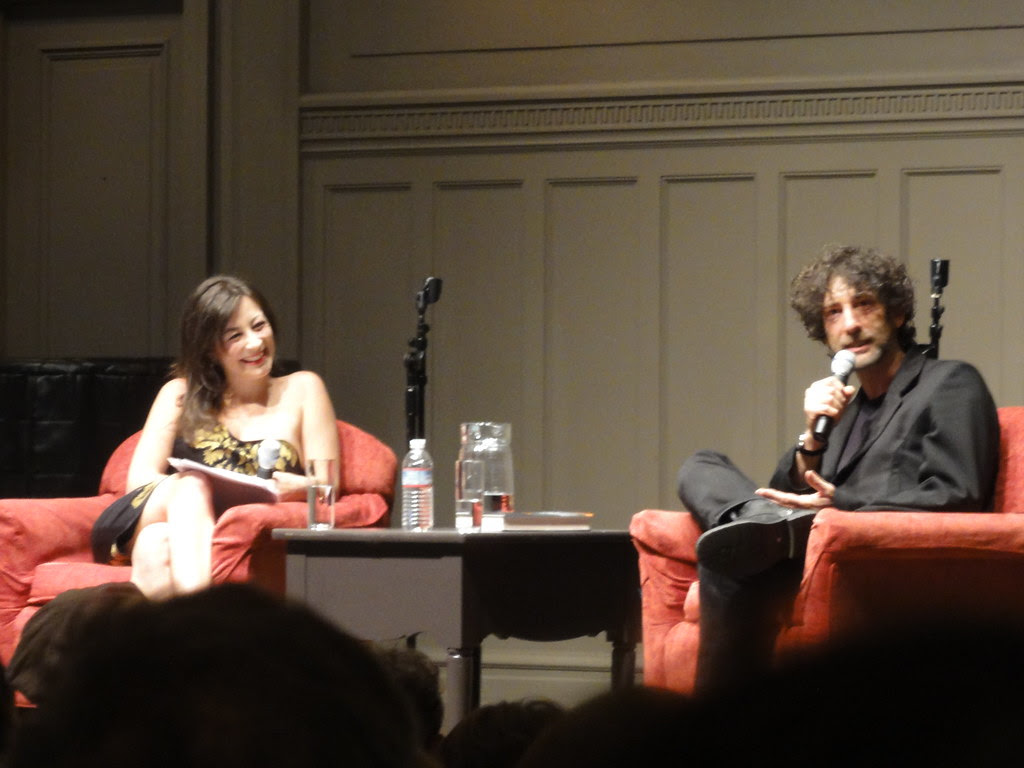 She got her digs in, oh, yes.  Just look at his face.  You know how some people are capable of teasing the people they admire, and the entire audience worships, in such a way that everyone shares a good belly laugh, including the supposed victim?  She's that kind of person.  Fabulous interviewer, and if she writes anything like how she talks, then I must have her books.  I wish I'd known when I was at the merch table, because I could have walked out with a signed copy of Queen of Kings.  Le sigh.  Ah, well, she's from here, so I'm sure I shall have another opportunity.

And Neil.  Oh, Neil.  He read from American Gods, a profound bit and a funny bit.  He answered the most difficult question, "Where do your ideas come from?", with aplomb.  We got to see a bit more of how his brain works, and believe me, when you're aspiring to become someone of his caliber, that insight is extremely helpful.  I'll have some of those insights for you tomorrow.  I figured that's as good a Dojo subject as any, am I right?

(Now we're on to some personal introspection, and if you wish to stop right here and go do something else, I'll understand completely.)

This was an interesting experience not simply because Neil is an interesting person and one of the best writers living, but because things have changed.  Ten years ago, I was a fangirl clutching the first edition of American Gods in my sweaty hands and trying desperately to come up with something decently intelligent to say to a man who might as well be my writing god.  I looked on in awe as he and Will Eisner spoke, and as Neil took the panel discussion by storm, and stumbled out of the whole experience with a pole-axed sensation.  I didn't have anything but aspirations and a few stumbling stories at that point.

So much has changed.  I'm not the world-famous SF author I want to be, not yet.  I'm not writing for a living.  Still a phone jockey at a call center.  But I've got a reasonably successful blog (not to mention utterly phenomenal readers and fellow bloggers).  I've gotten over wanting to be someone else and just want to be Dana Hunter when I grow up.  My fiction, while not ready for publication, has matured.  It's now its own thing, not trying to be Neil Gaiman or Tolkien.  Instead of hanging on his every word of writing advice, I could nod at some of it.  "Yup, done that, working on that, definitely doing that."  There's a certain confidence level I didn't expect that comes from all that.  I know, now, that I can do this.  It's a certainty (which certainty I sometimes don't feel when I'm struggling with the words or worldbuilding, but every author suffers that).  I'm sitting down, putting the words one after the other, and they're my words, my worlds (and never mind I'm writing fan fiction right at the moment - it's fan fiction on my terms, in my world, and the character I've filched just a method for getting to know that world in greater depth).  I know the stories I want to tell, and I know I have the ability to tell them.  I had none of that the last time I saw Neil.

And I didn't have you.

You've made a huge difference, my darlings.  When that stupid niggling voice of doubt starts whining away in the back of my mind, I've got your comments to combat it.  I've got brilliant people, quite often fantastic writers in their own right, who find my words worthwhile.  I can't ever explain to you how valuable that is.  That's validation, and it's a goad.  It's a long damned road, from wish to concept to novel to publication, but we're some distance along, and you're there.  When I want to give up, you're giving me ye olde pep talk.  When I stumble, you're there with a steadying hand on the elbow.  When I'm tired and want to stop, you keep me going.  So what I am and what I become, in large measure, is down to you.

And thank Neil for being a very admirable North Star, and reminding me tonight that writing great novels and making people happy is not only something that can be done, but something very much worth doing.

"We owe it to each other to tell stories," Neil says in his poem "Locks."  True stories and fanciful stories and yarns and myths, there are so many stories worth telling, and so many wonderful people to tell them to, who will tell their own in turn.

It's a magnificent old life, this.  Especially when a ukulele player opens for an author, and marketing involving author sex tapes is considered.

And, because I am a writer and a bit cruel because of it, I shall leave that last bit dangling tantalizingly before your eyes without explanation, until tomorrow, when all shall become clear.

Agree with everything you said except for Maria being a great interviewer. SHe was way too inconsistent, starting/stopping, and many times the momentum of the event would gring to a crashing halt due to her. She did not handle any natural segues from one question to another nor was she able to smoothly follow up one answer with a susequent question. At times she WAS charming/witty, but she was defintiely a weak point to the evening. However, I had never hear dof her before last night and I definitely plan on picking up her "Cleaopatra" book to give her literary skills are look-see.

And though I am posting "anonymously" I will not hide my criticism behind such.

I thought Maria did a great job. The format was much better than standing in line for hours and we got to see quite a bit of him.

Did anyone video the Q & A section? He was kind enough to mention my music & I'd love a copy.

@Ray I can see your point, but I thought the more conversational tone of it all was an utter delight. Reasonable people can disagree. And I love that you don't hide criticism behind anonymity!

@Damon How awesome is it that you got a shout-out from Neil Himself? I don't think I caught that bit on video - had to stop a few times to change batteries, alas. I know someone was there with really-real recording equipment, but haven't seen a video posted yet. I'll link it when it's available.

Do you have any of your work you'd like me to plug? If you've got something we could embed, we could have a little interview of our own.

@Dana Yes, thanks, it was completely awesome! I have music to embed, I'd be delighted to talk with you. I'm @damonbuxton on Twitter or you can contact me via http://damonbuxton.com

I (and my companions) have to agree with anonymous. While Maria was charming + lovely eye candy herself, I felt she was a poor interviewer. She was well-spoken at times but overall, she felt very disorganised and too chummy.

We grasp that you were out the night before with Neil, drinking many bottles of wine - a fact which probably made most of the audience green with jealous. And we get that your legs are lovely in sparkly distracting shoes but do you have to consistently bounce your crossed leg to draw attention?

We had fun at the event. Molly singing her pair of charming songs whetted our palates for a night of fun. And Neil definitely handled the crowd with aplomb, making for a well spent $5.00. Next time though, I wish they'd pick a better interviewer.

I'm new to this site, but do you have video of the event? I'm not sure if you're going to make a separate post with it, but I'd be interested in seeing that. Thanks!