Let me show you a sight that is frankly astonishing to someone from dry country: 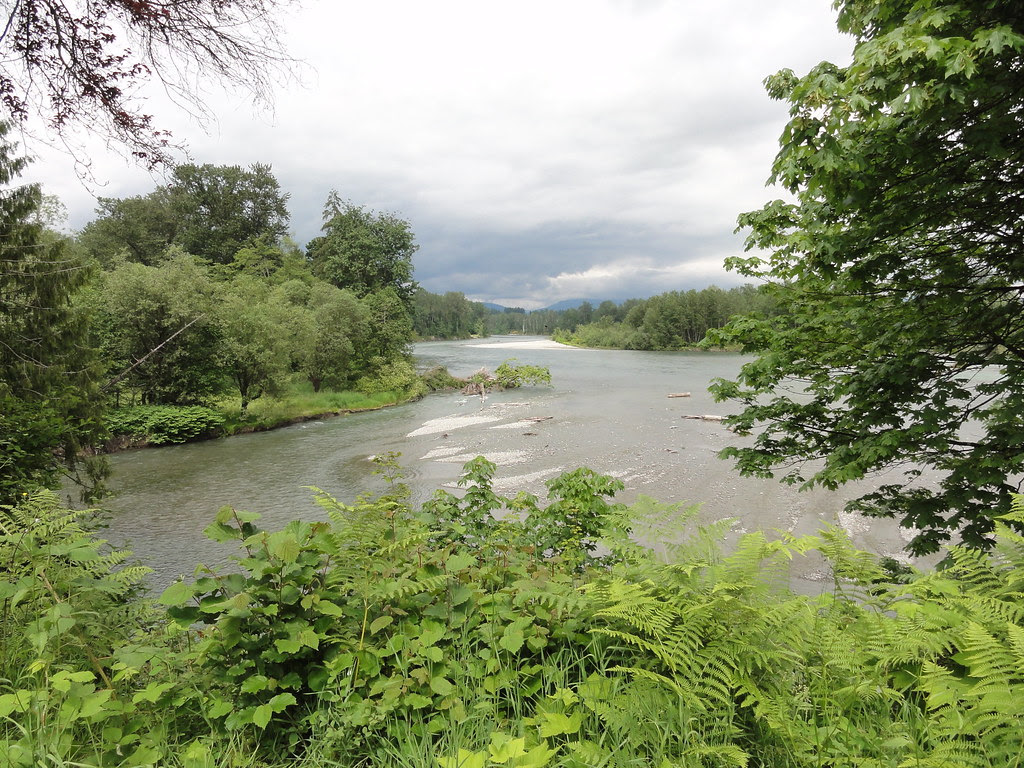 This is the Skykomish River.  It has got water in it, all the time.  Where I come from, a river is defined as a linear depression in the ground that is too wide to jump over and is occasionally moist.  This goes a long way toward explaining why I'm bloody ignorant about rivers.  But ignorance is not bliss, and I'm using this visit to the Skykomish River to continue my education about rivers.

Absorb the above photo for a moment.  You're looking at a prime example of a riparian zone.  I first heard the word "riparian" in my physical geography class, and immediately fell in love with it.  It's just got this certain ring.  And for me, it's associated with scent: sweet water and luscious plants, damp earth and, sometimes, just a hint of fish.  It's got a particular feel: a cool, damp world unto itself, small and yet somehow expansive.  It's got a look: green.  (Mind you, everywhere I go is green now, but that wasn't so back home, so riparian is the quintessential green.)  It's got a sound: trickling, rushing water and rustling leaves and insects and birds and unseen things rattling around in the bushes.  Riparian isn't so much a zone as an experience.

And experience it we shall, but not before I force you to delay gratification a moment while we indulge in an overview.


The Skykomish River is short, sweet and to the point.  It's only 29 miles from its origin in the Cascades to its end at the Snohomish River.  But it drains nearly a thousand square miles.  It played a large role in the economy of this bit of Washington State.  It's certainly not inconsequential.


That forested strip just to the top left there under the city of Monroe is Buck Island.  It's more peninsula than island, but we won't quibble.  It's very nearly surrounded by water, and sometimes it's completely covered in water, so if it wants to be known as an island, we're good with that.

We'll be walking down there in just a moment, but right now, let's have a closer look up the river. 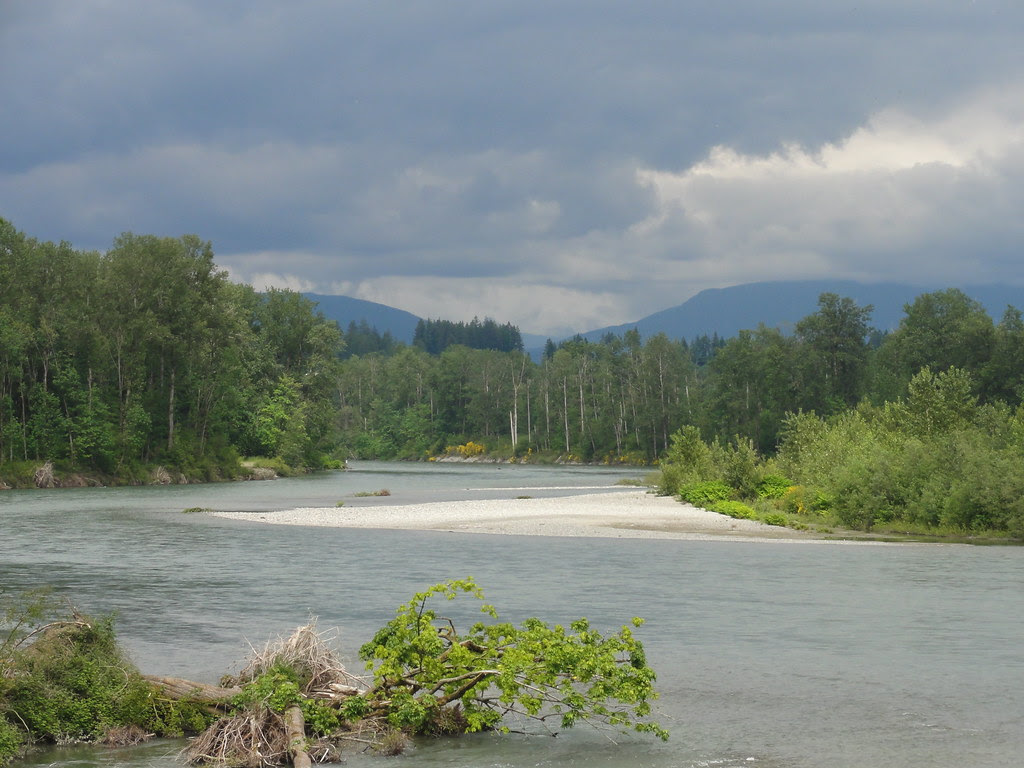 You can see the Cascades there in the distance, doing their best to hide behind the clouds.  We're in the Skykomish River Basin here, and just to our left is the Woods Creek Sub-Basin.  Note the word "basin."  We're in the down-low here.  This area was once underneath about 3,000 feet of ice, which did interesting things to the topography, and the river's been playing with it ever since.

I don't think a lot of people think of rivers when they think geology, but as we meander along like the river meanders through its basin, we'll see that it's got a lot to do with geology.  It's making geology right before our eyes.  Check out, for instance, that sexy little gravel bar in the middle of the above photograph.  If it's very good and very lucky, it shall one day become a lovely conglomerate.

Let's go down on Buck Island and have a look at matters from the picnic area. 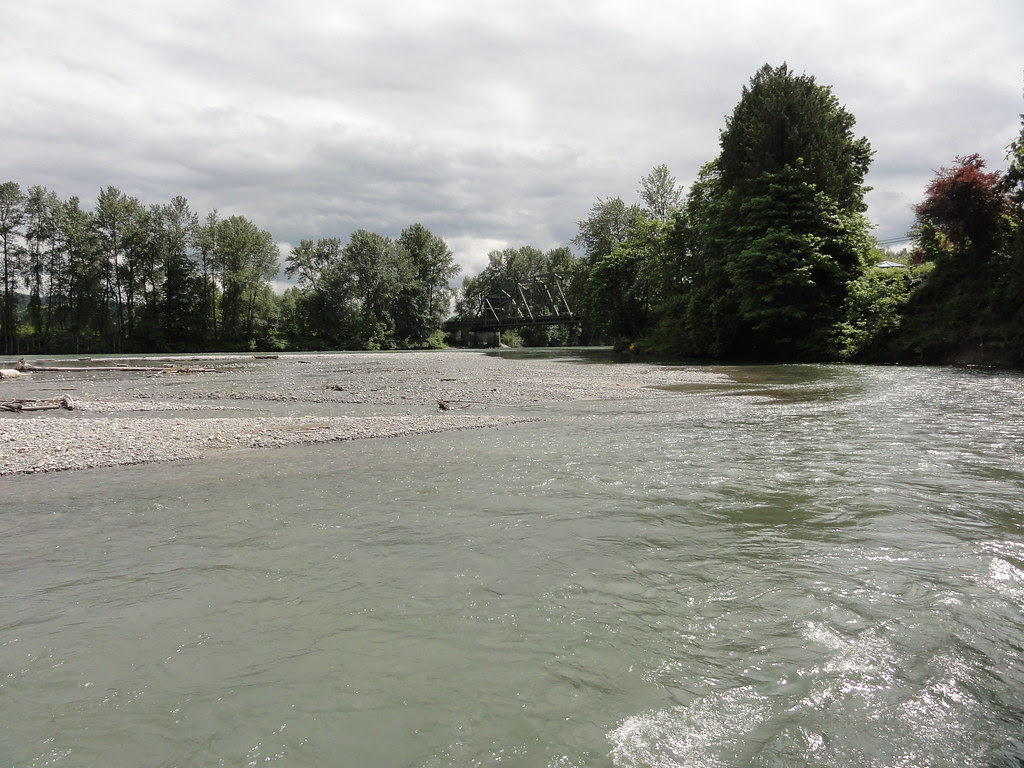 Looking toward the bridge, here, you can see the river take a bit of a turn around its gravel bar.  It looks like it's trying to carve its way through to Woods Creek, which is just behind all those very tall trees to the right, there.  And as it takes that turn, it's undercutting its bank on this side. 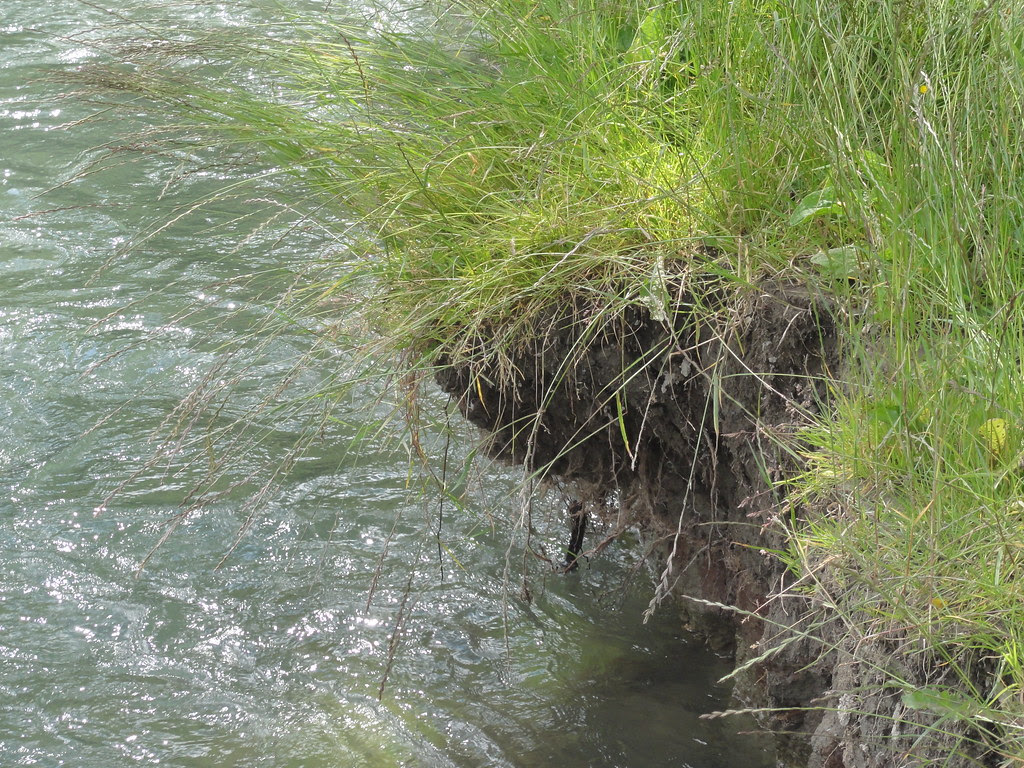 In fact, it had just recently finished carving off bits. 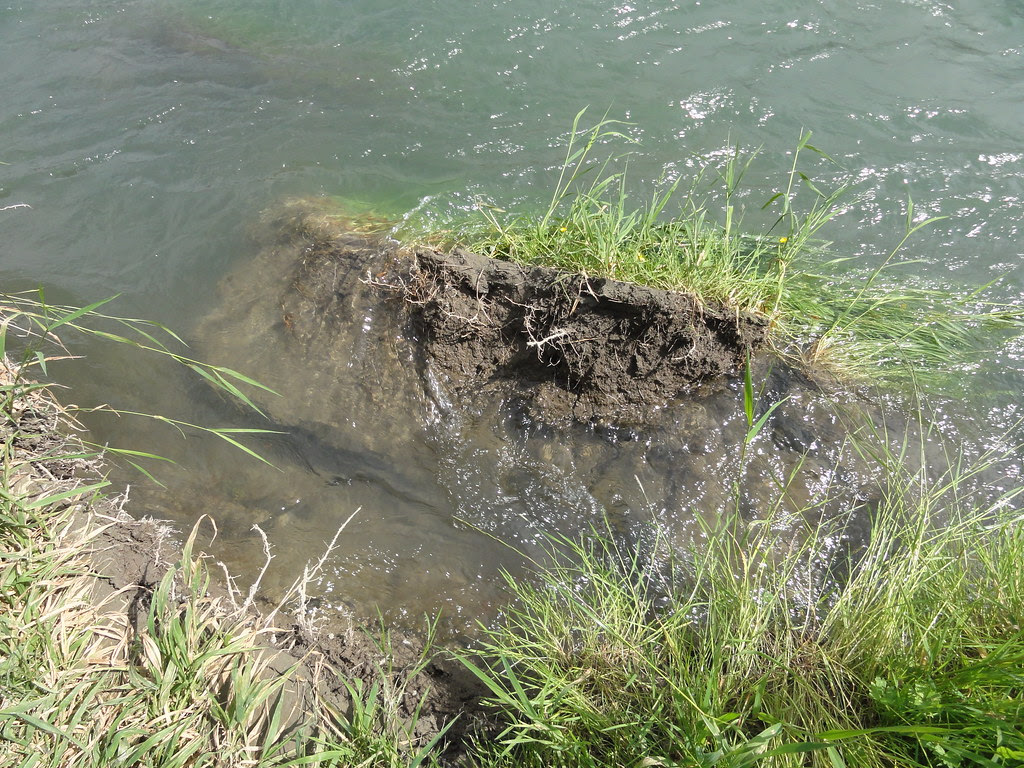 It may not be riverbank collapse on the scale of the Missouri River, but it's along the same continuum.  The river gaveth sediments to Buck Island, and now it taketh them away.

Here's a nice closeup of those sediments, which other people call mud: 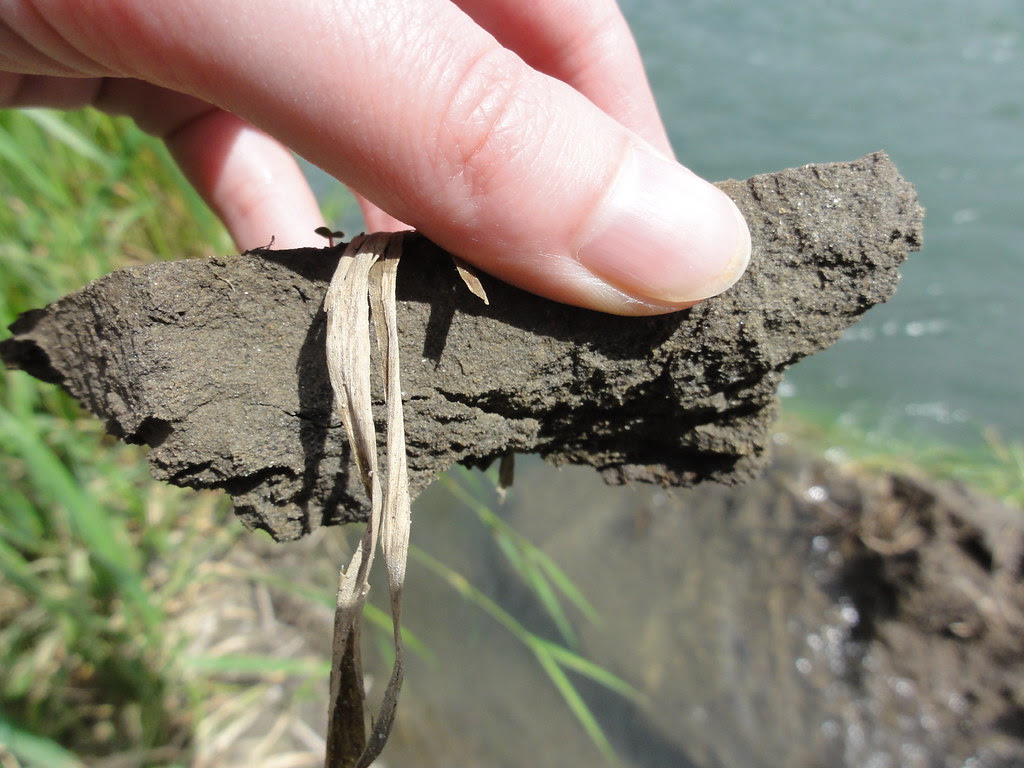 I think I see some mica glittering in there.  It's all full of minerals, and the plants seem to love it.

Here's a nice view of the opposite bank, where you can see all the layers laid out: 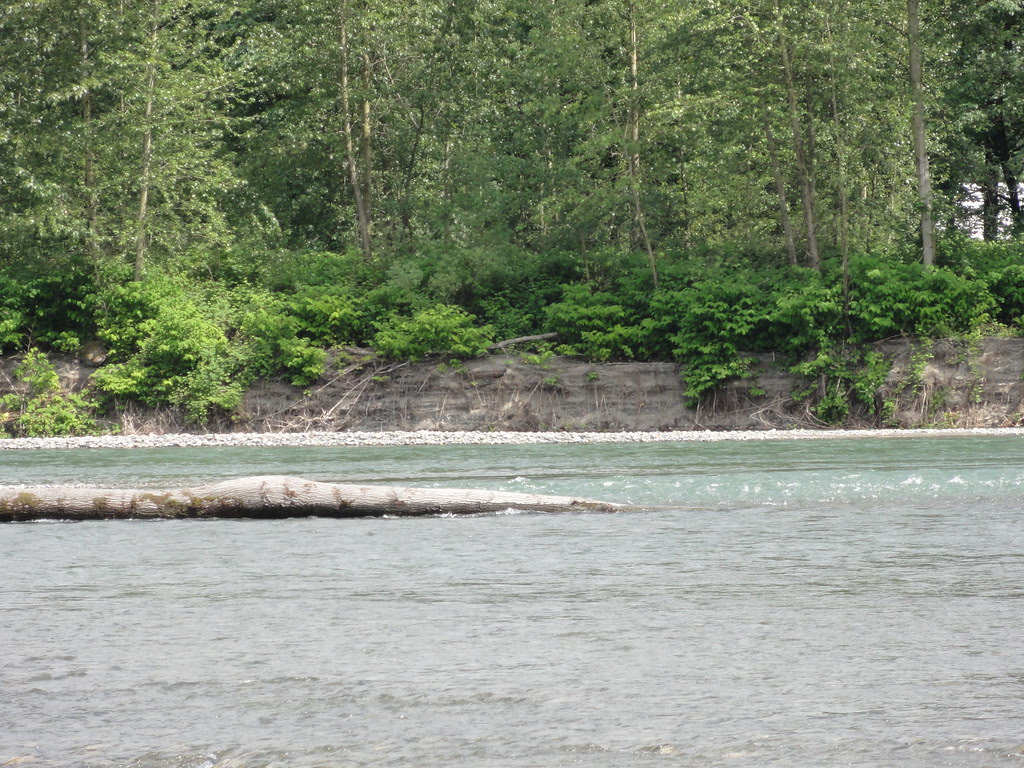 Someday, those might become sandstones and mudstones and conglomerates that will tell far-future geologists that a river once ran through here.

Right now, the river seems lively, even frisky, but not particularly wild.  Don't let it fool you.  It carries an average of over 24 million gallons of water past this point per day.  I'm not sure how much flows past in flood stage, but considering Buck Island goes under and we'd have to swim for it were we standing at this spot during a flood, it is, to put it mildly, a hell of a lot of water.

And it is powerful. 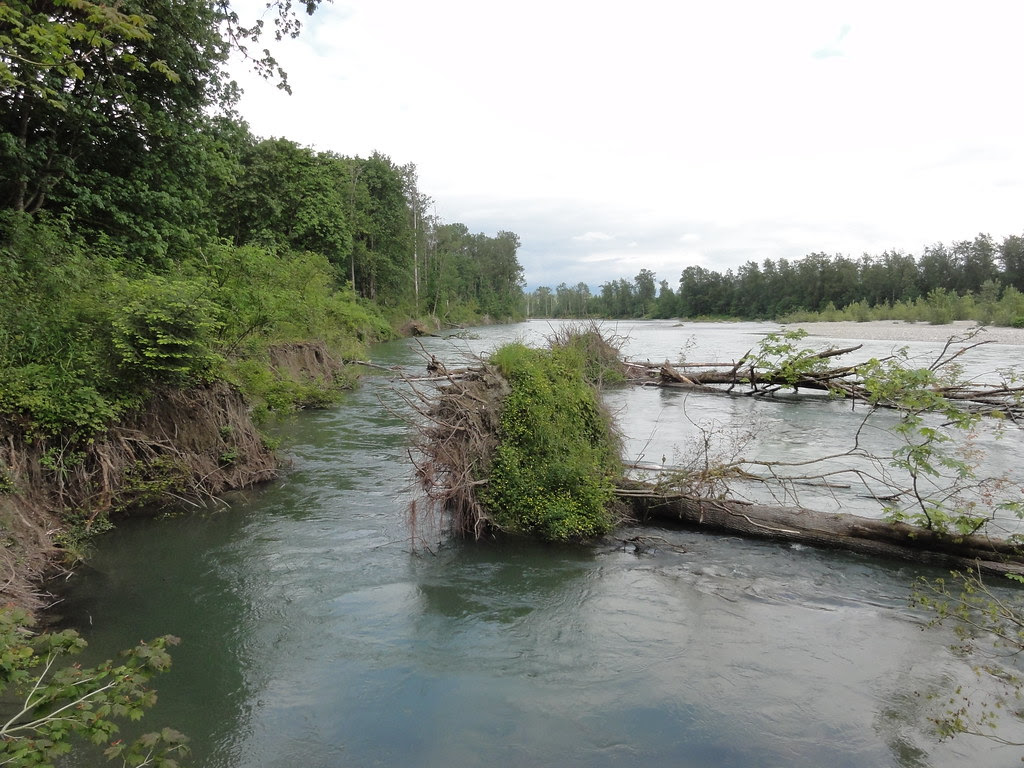 This is what is known as "large woody debris," or "holy shit the river just ripped those trees right off the bank and dumped them in!"  Big trees, very tall trees, which had been happily growing with a nice riverfront view for years, and they are now sleeping with the fishes.  In fact, fish quite like having them round.  But pretty damned catastrophic for the trees.  Think of that before you start thinking of building a nice riverside home.

Before we head up river, let's have a good look round, take in the whole scene.

Large woody debris, undercut banks, gravel bars filled with rather large (and, take it from one who schlepped a few out, heavy) cobbles, and an enormous amount of water.  Amazing, when you think of it, that we had the chutzpah to put a bridge over it.  That's the tiny little human structure toward the top right, there.

All right, let's head on up river.  Here we have a slightly muddier little cove, and oh, look, more large woody debris. 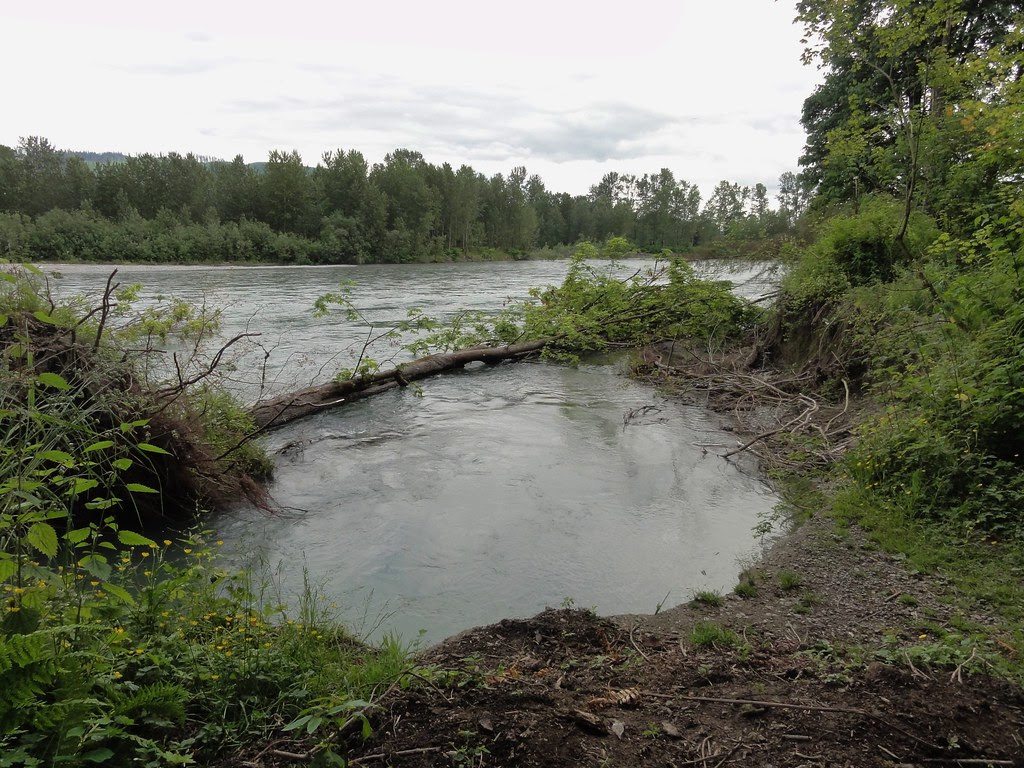 One of my sources for this post notes that "LWD provides physical habitat for plants and animals, alters in-stream habitat by creating pools, riffles, shade, and hiding places, adds nutrient and energy sources, and can decrease erosion."  Here we have a fine example of LWD doing its level best to create a nice pool.  If it doesn't get hauled downstream in a big ol' flood, it might even trap enough sediment to create more land at some point, depending on how things go.  I find that fascinating.

Here's another thing I found fascinating: 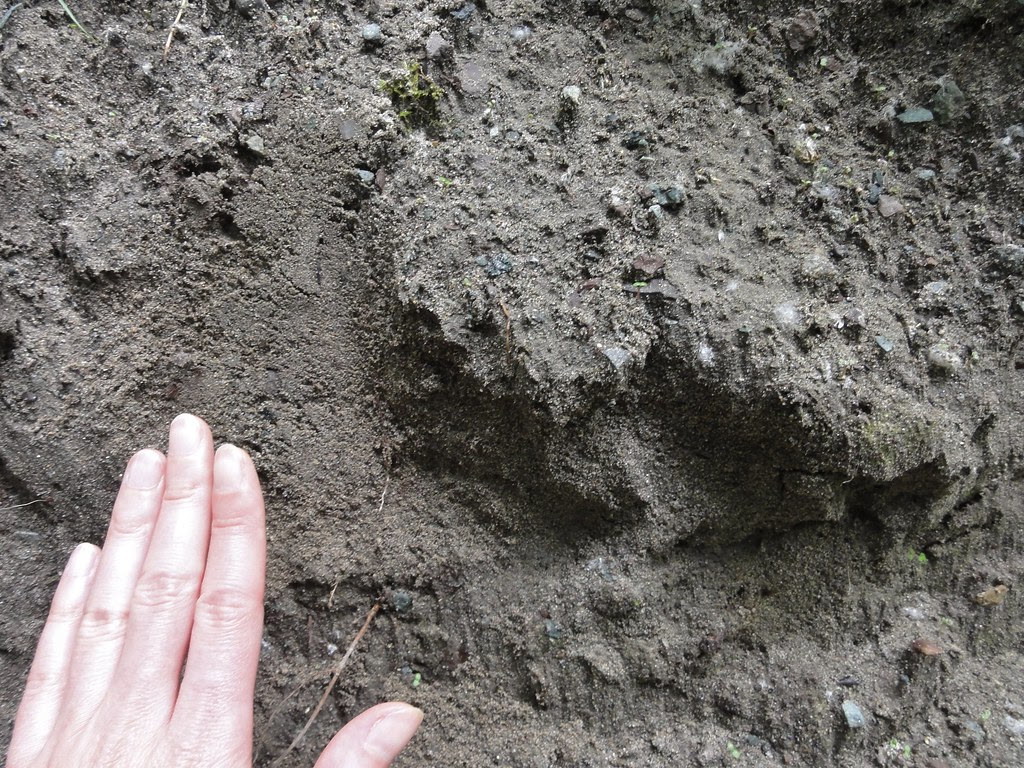 Inland from the river, you can find these banks of sandy sediment and pebbles.  I didn't know at the time that the Skykomish sometimes turns Buck Island into Buck Riverbottom, but I could guess, just from these deposits.  I love this stuff.  I love seeing how rivers create land.

There's a very nice bank further along that exposes the layers of river-deposited sediment nicely: 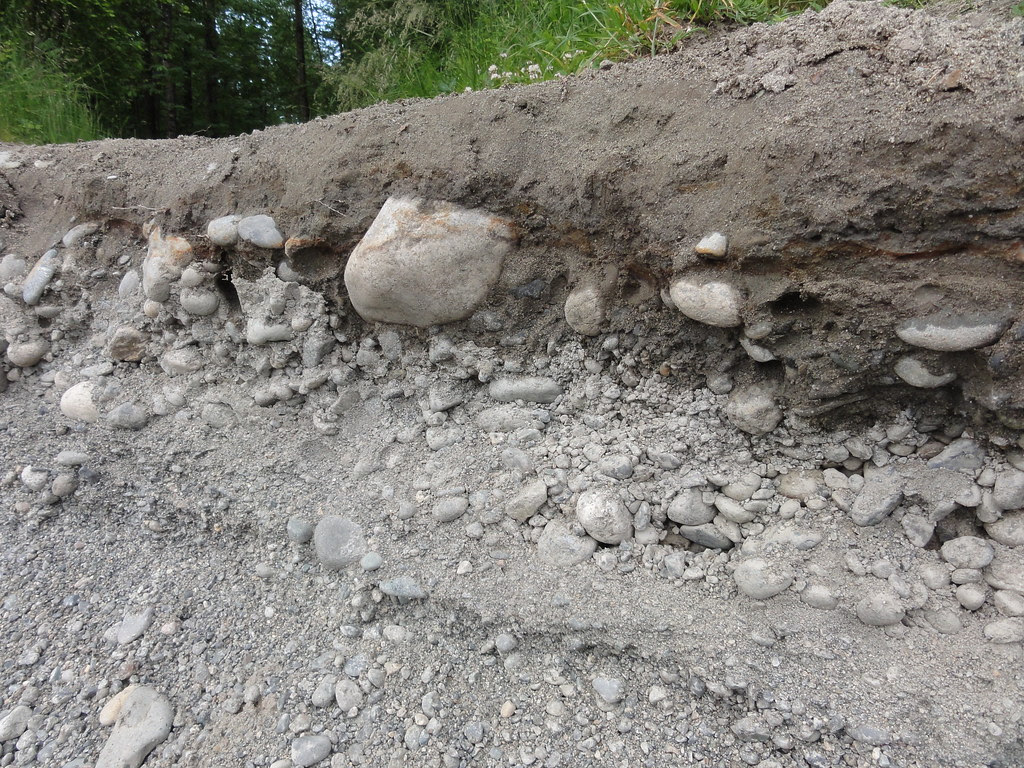 Look at all the cobbles!  And if I'm not much mistaken, we're seeing variations in energy here: at times, the river was powerful enough to carry gobs of cobbles.  At others, it managed pebbles and sand.  Someday, I'll know more about how rivers flood and sediments settle out, and this will make exquisite sense. 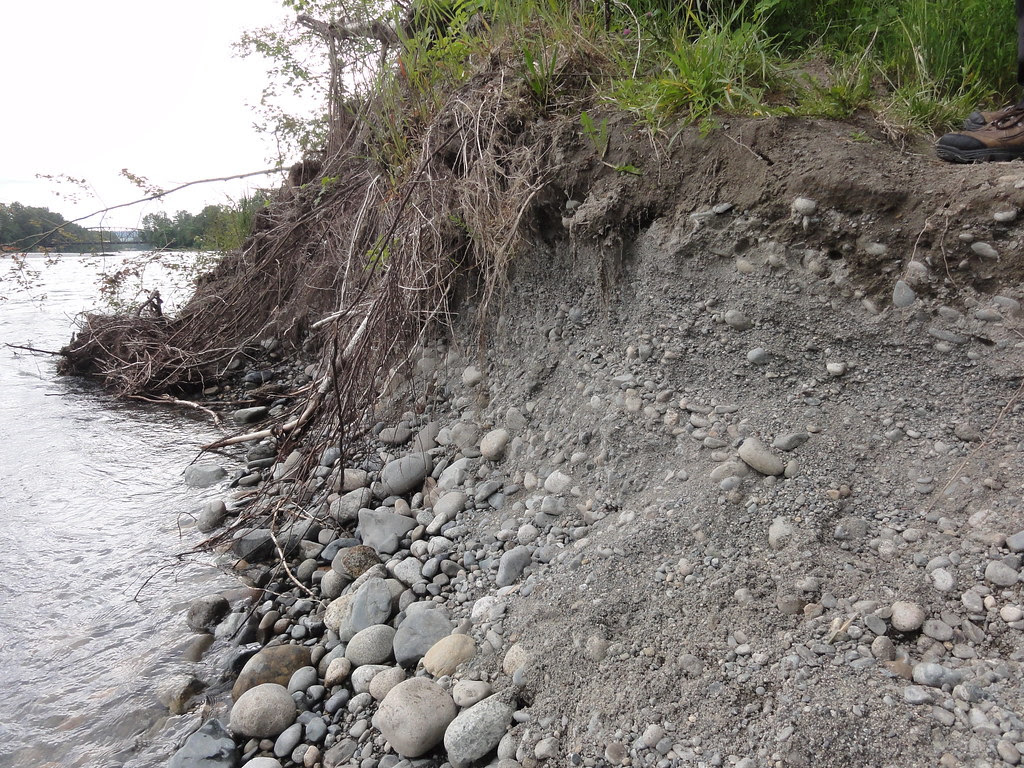 Isn't that wonderful?  And you've even got my Intrepid Companion's boot for scale!

And as we walk upriver, we notice one of the most fabulous examples of erosion ever. 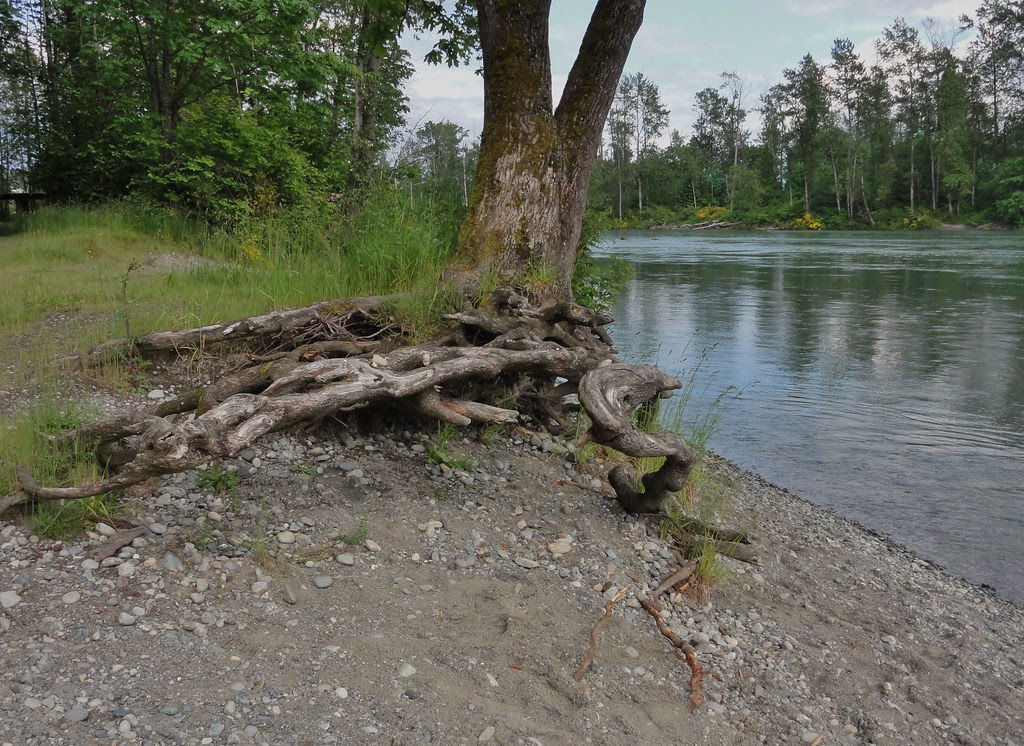 It seems there was a lot more riverbank here at some point, because this tree had a chance to grow a very gnarly root system.  Now the river's carving it out.  Check this from another angle: 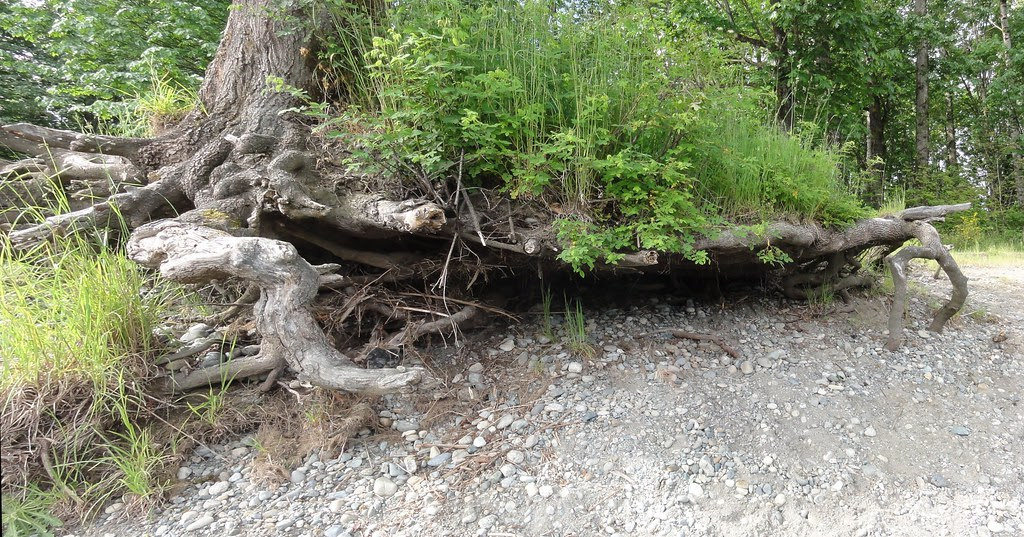 This baby's got "Future LWD" written all over it, but for now, it's clinging on with stubborn determination.  It seems almost grumpy about it, like it's muttering, "durned river, get off my lawn!"

When you get further up river, away from the gravel bar and undercut banks, you can look back down along it and think it almost looks placid. 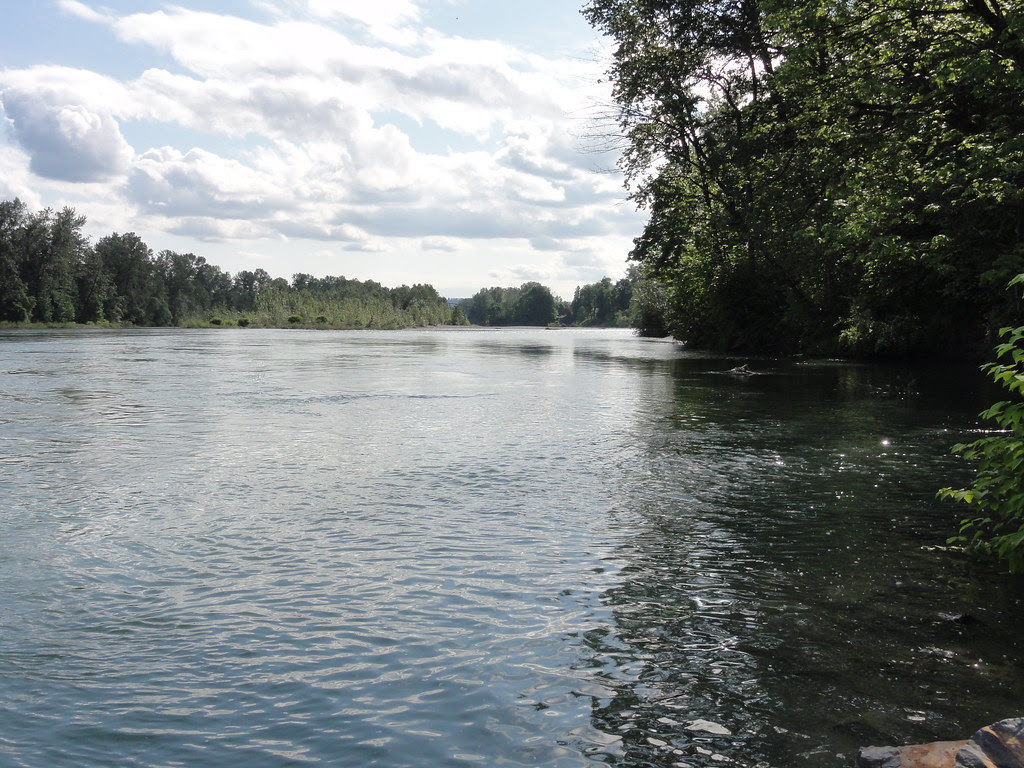 It's anything but.  Oh, and did I mention it's bloody freezing frickin' cold?  It's fed by snow.  It's very, abundantly clear that it carries a lot of snowmelt, and that it's been snowing in the Cascades, and that snow has been, above all, cold.

Let's have a look from upstream at the gravel bars, shall we? 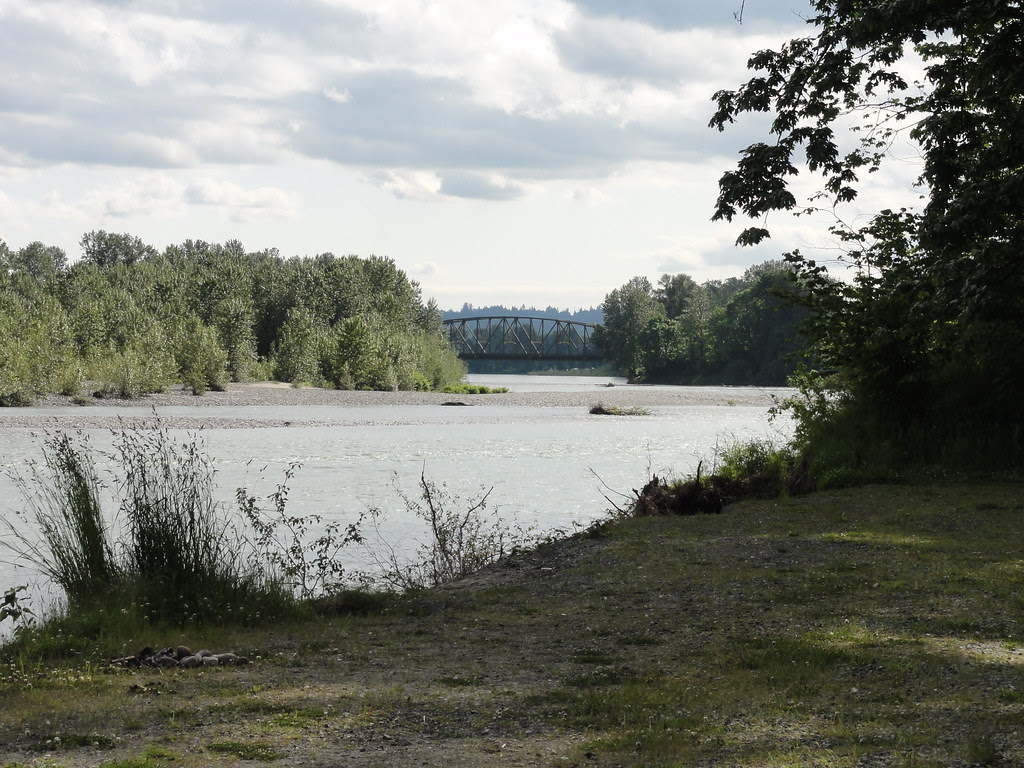 Really, seriously amazing and beautiful things, rivers are.  And just you wait 'til you see what it's like when it's not ambling along a nice, gentle gradient, but dashing down the mountains.  But before that, you'll see what I have against it.
Posted by Dana Hunter at 12:04 AM

Dana,
Here's a phrase you can add to your geologic lexicon (if you haven't already): "fining upward sequences". As you pointed out, there's a flood strong enough to carry cobbles, and then pebbles come down, and the sediment in the exposure fines upward into sand and mud... and then the whole thing repeats. Flows of various geologic sorts produce fining upward sequences in sediment; it's a good phrase to know.

Your river pictures remind me that I did some of my growing up near the San Joaquin river in California's Central Valley. The SJ is a very controlled river through the valley, and by the time it gets to my growing-up place outside of Tracy, it's a vast river full of the agricultural runoff of countless fields and dairy farms.

I used to hang out in a riparian area between the massive levee and the non-flood river channel, where I loved seeing the trees and wild sunflowers and rabbits and birds. I would stand at the edge of the water, looking oh so deceptively placid -- the current is fierce, though the river surface is usually smooth -- and wonder about where it came from, and what it saw along the way.

And you've even got my Intrepid Companion's boot for scale!

Always happy to contribute to the understanding of science...

Late to the game, but thanks for these photos, Dana. I've just finished up (fingers crossed) a paper in which I looked at the historical discharge record of the Skykomish River (among others). But it is much much nicer to contemplate the actual river than simply its statistics.