I meant to get on with Volcanic Venerations, email some people (Ann, George, everybody, I still love you!), catch up on blog reading, etc., but the sun is shining.  The birds are singing.  I've been cooped up in the damned house without sunshine for absolute months.  And tonight shall be another marathon writing session which will leave my wrists howling in agony.

So I went off to visit some old friends.

I wish I could tell you more about them, these wonderful neighborhood boulders o' mine.  But they've been ripped out of context and plunked down in the middle of a city, and I am teh suck at field identification.  So what you're getting is some pretty pictures and some guesswork.  Feel free to add corrections, identifications, and so forth in the comments.

Right.  Let's begin with a friend I haven't seen since last summer. 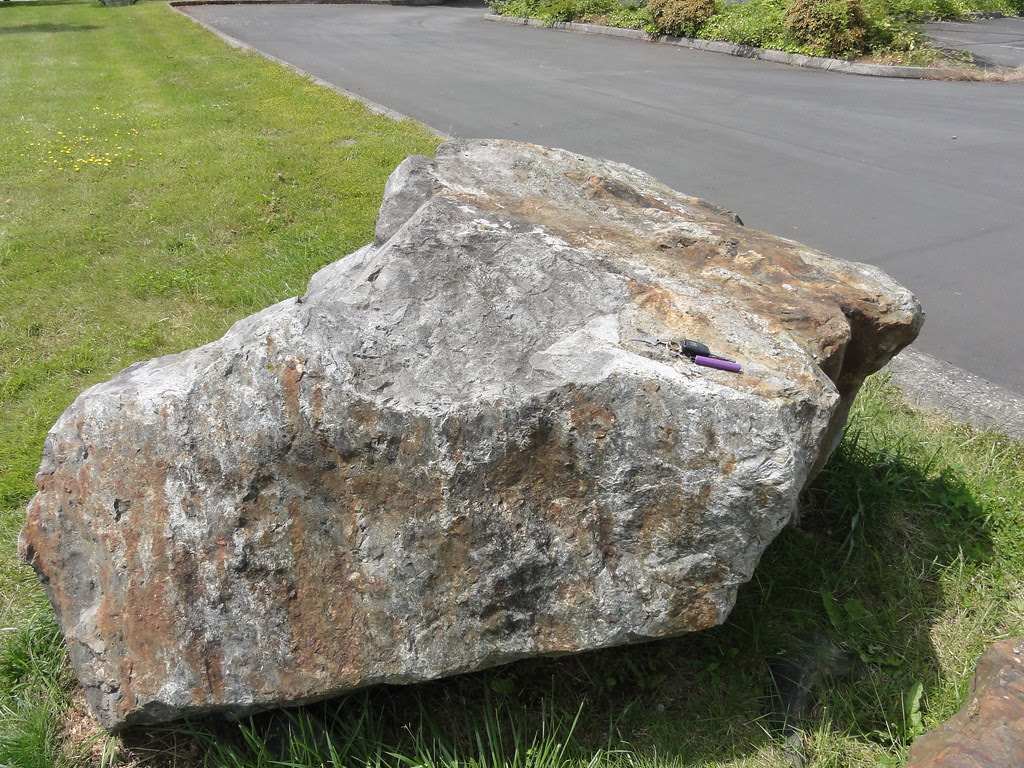 (Now you know what my key ring looks like, too.  It was all I had on me for scale.)

This big beauty resides on the edge of the Seattle Times parking lot.  I have no idea what it actually is, because I don't think the property owners would take kindly to me whacking off bits with a rock hammer, but it's got many points of interest. 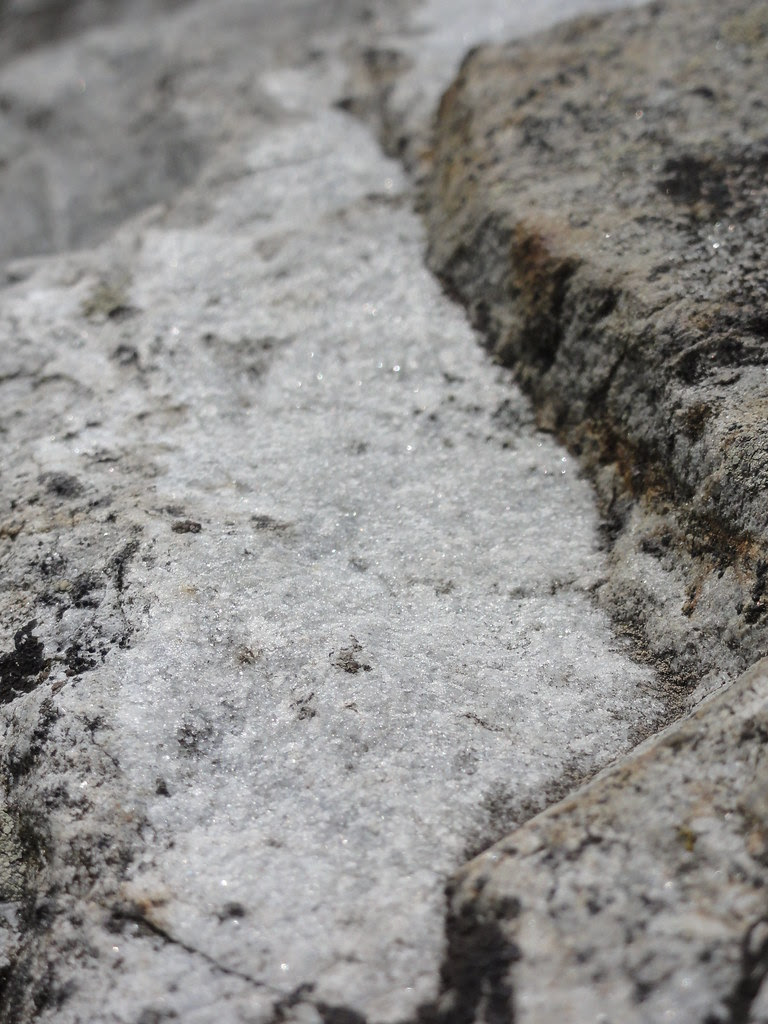 It's got these patches that all sort of sparkle.  I think these are deposits of some sort - they don't seem to be part of the original texture of the rock.  Seems to be a fine example of a druse.

Here's an overview with a key for scale: 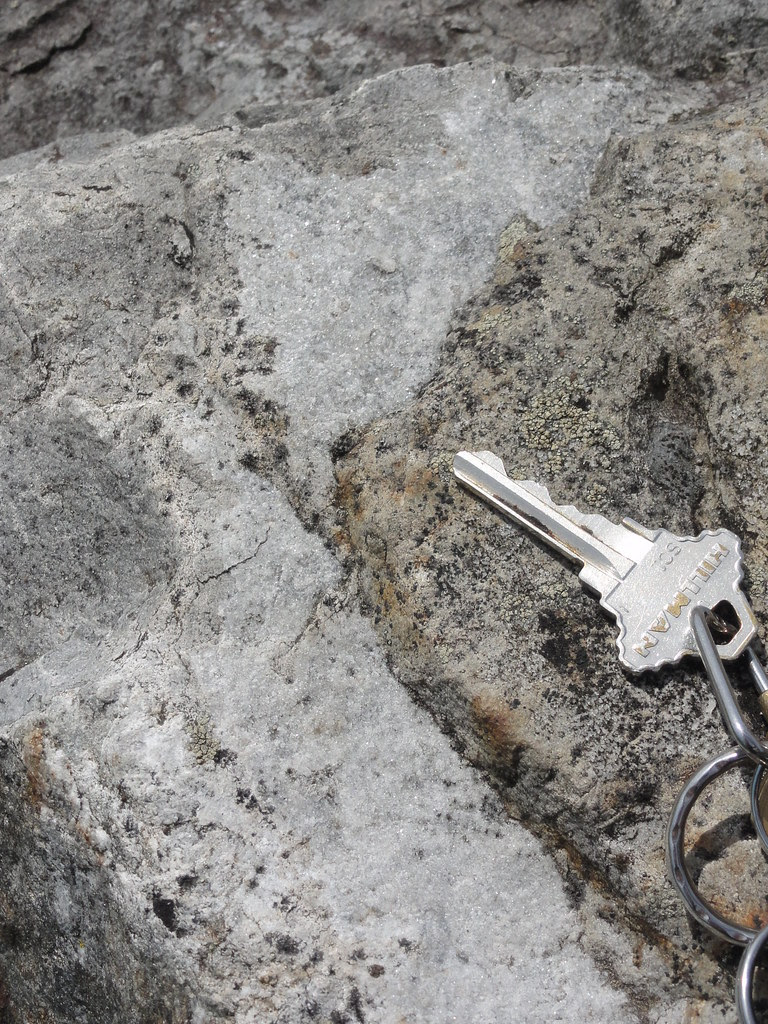 And on other bits of the rock, there's all these little copper-colored flecks, which I hadn't ever noticed before and am now completely in love with: 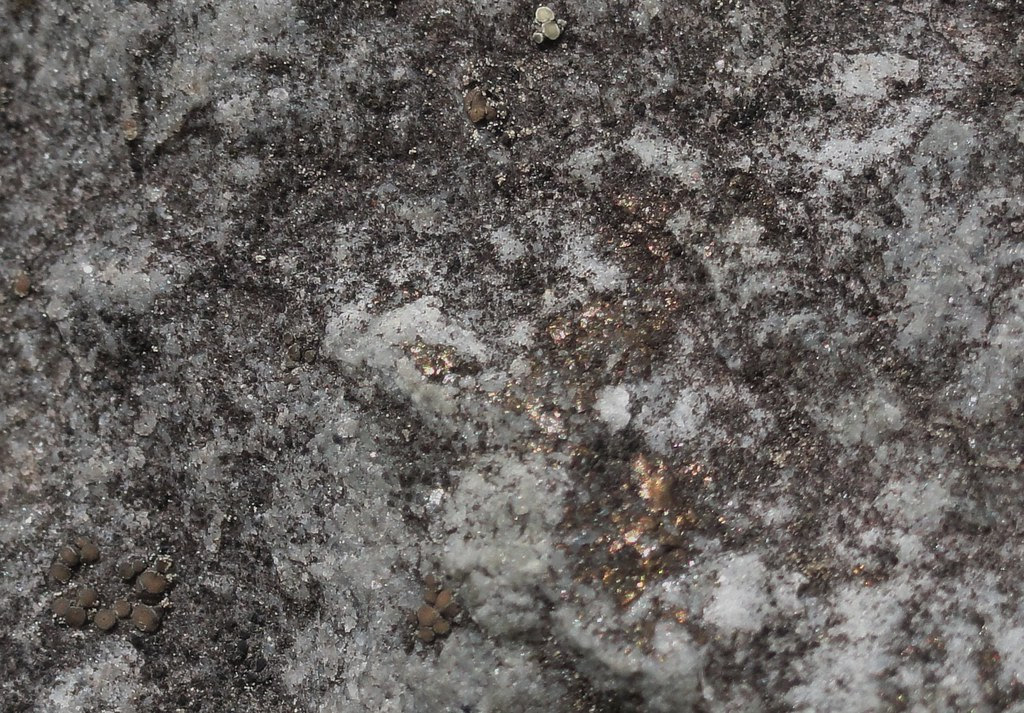 I'm no geologist - I can just about figure out some of the large-scale stuff and identify a few basic rock types.  So I may be completely wrong.  But from what I've learned, I do believe this boulder may have spent some time stewing in hydrothermal fluids.  And I doubt it's local bedrock, nor would anyone in their right minds have paid to ship it so it could stand like a great lump at the end of a newspaper parking lot, so I'd even go so far as to say it's a glacial erratic.  Someday, mebbe, I'll haul an actual geologist over there, and we'll learn its gripping true story.

With that big boulder to explore, you might not turn your attention to the smaller rock nearby. 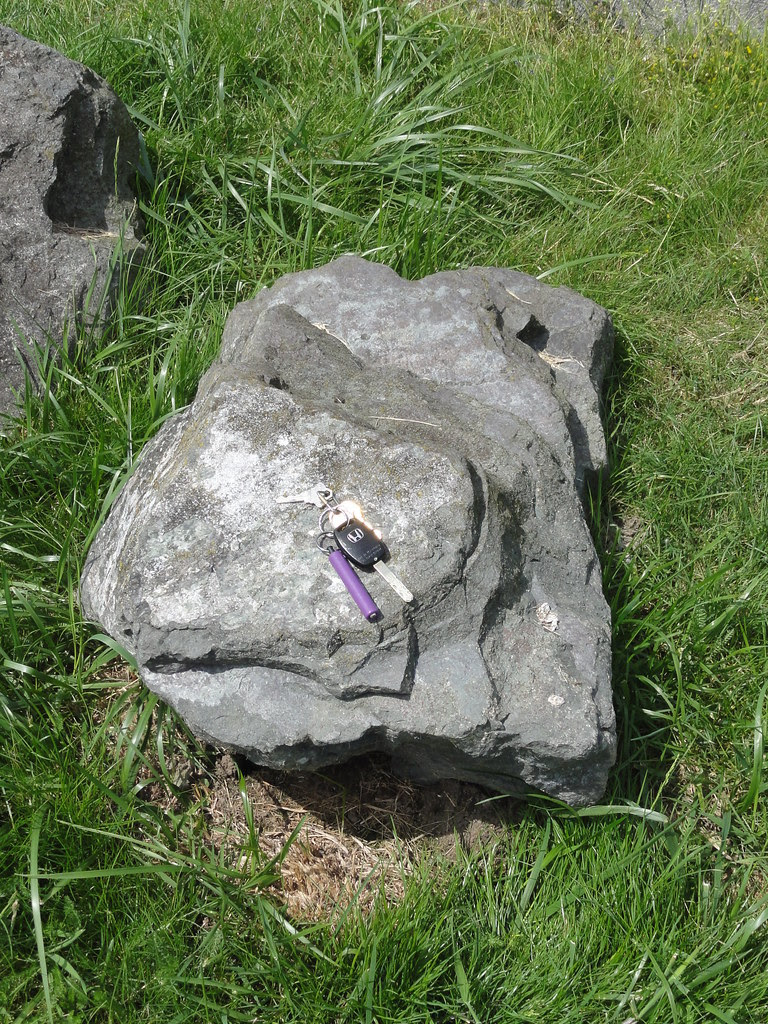 But let's say your attention is drawn by its odd but pleasing shape, and then you notice a pale patch of discoloration on top. 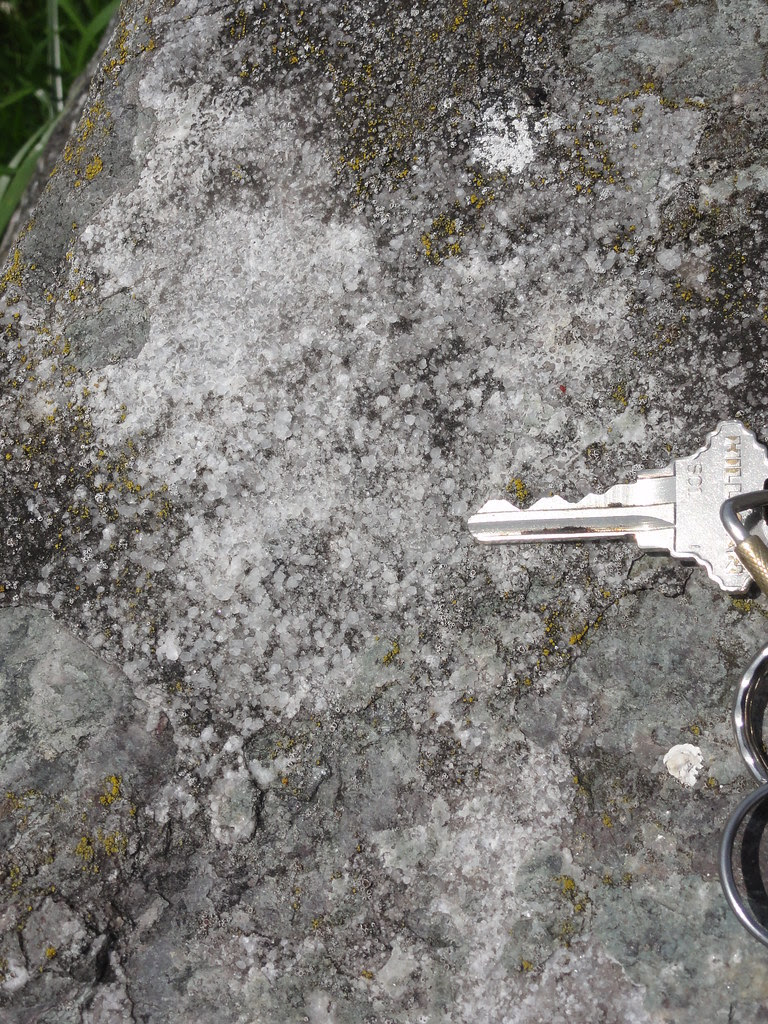 And if you bend down to inspect that patch further, you'll see an utter delight: 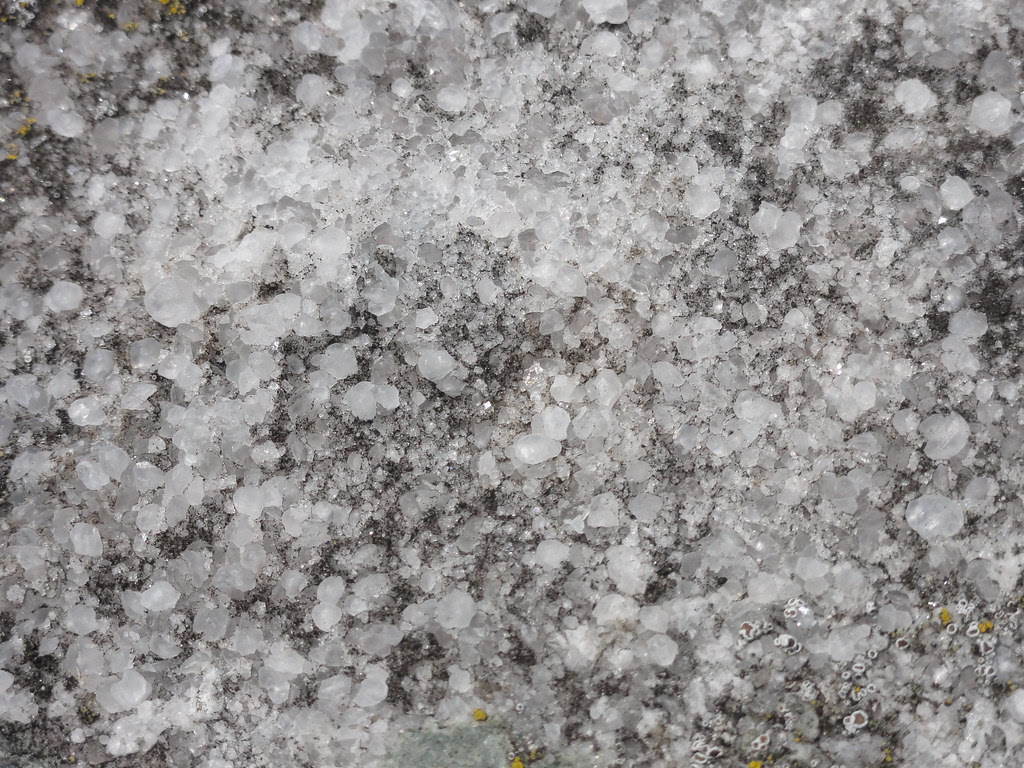 Sugary little crystals!  Once again, I think this is something that came out of solution and deposited itself on the rock - it's otherwise pretty fine-grained.  Suppose I should head out there with a hand lens next nice day and have a closer look, eh?

On the way back home, I stopped off to chat up a very old friend indeed: 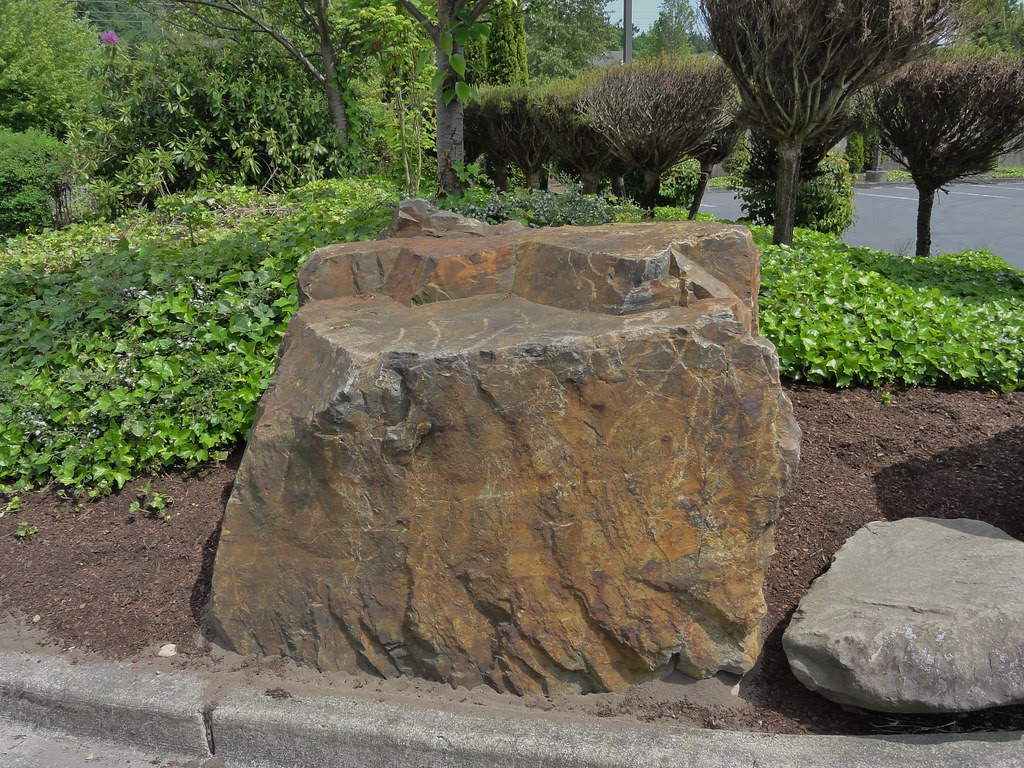 This boulder is one of my great favorites, and long-time readers of the blog have probably seen it around before.  If it had ever stopped raining this spring, you would've seen it before now - a few weeks ago, it had flower petals all over it, and just looked remarkably pretty, but I didn't feel like risking the camera in a downpour.  Maybe next year.  Today, however, was a treat: the sun was really going to work on its colors and textures. 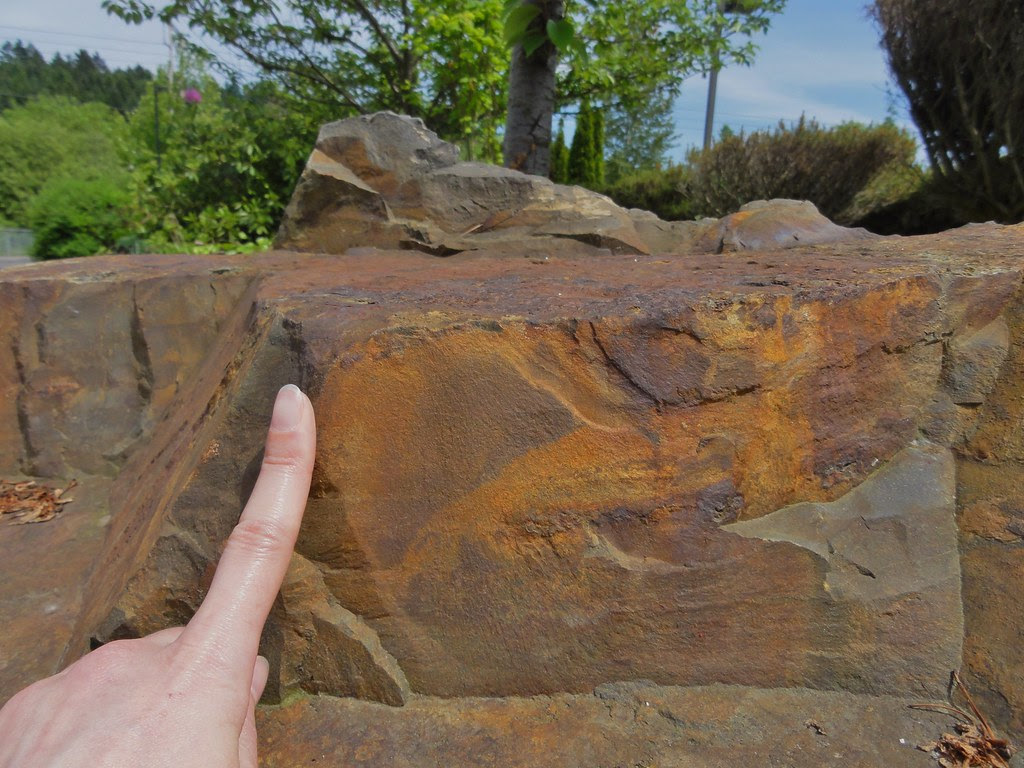 After all these years, though, I still haven't figured out what it is.  I know it's very fine-grained and seems to have lots and lots of iron.  It's tough, solid, and gives me igneous vibes.  Then again, it could be something completely different.  Ideas? 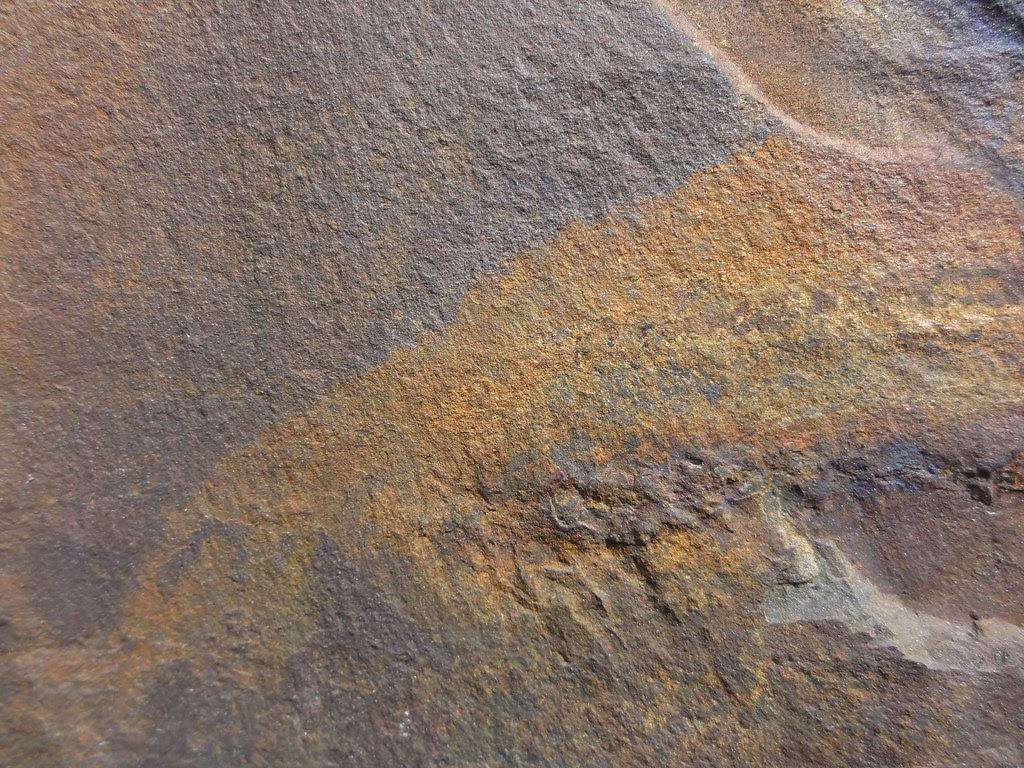 And, finally, a little delight I noticed for the first time last year, and never fails to make me smile when I walk past it: 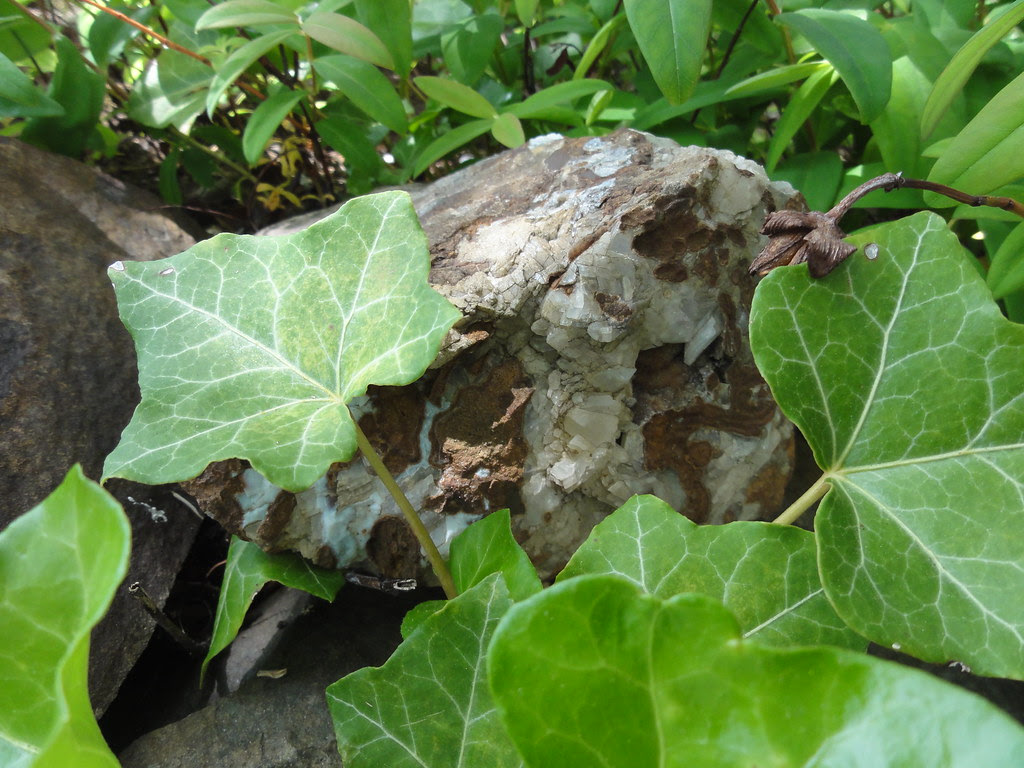 Click to enlarge that one.  Really, do.  It's just amazing.

Those are a few of my favorite friends.  One day, I'll know their stories in greater detail.  I'll be able to puzzle out their histories from the few clues I've got.  But this is why geology fascinates me: because it's beautiful, and there's so much more below the surface sparkle.
Posted by Dana Hunter at 12:21 AM

It seems Blogger ate my first attempt to comment last night, so I'll give this another try.

First off, I don't think those first two rocks are glacial erratics. They strike me as too angular, with more of a quarried appearance. But the real smoking gun is that they appear to be sitting atop the sod/grass. That makes me pretty sure they're landscaping rocks transported there by human, rather than glacial means.

I do think you're right about identifying the white crystalline mineral as drusy quartz. There's a chance it's calcite (either an acid test or a hardness test would discriminate conclusively), but in either case you're probably also correct that it's the result of hydrothermal processes and therefore secondary rather than primary. I think the coppery mineral is most likely weathered biotite. Not sure if the overall rock is igneous or metamorphic, but it looks too crystalline to be sedimentary.

Your big rusty rock is also probably not a glacial erratic. I think it's probably basalt and the iron staining likely comes from weathering of a small amount of pyrite, though I can't be sure of that.

Not sure what to say about the last one hiding in the ivy. The crystals look like they're either calcite or quartz, so again the hardness or acid tests would be my recommendation to tell the two apart. Hope that helps!