President Obama: "This Is the Journey We Continue Today"

Ladies and gentlemen, the 44th President of the United States, Barack Obama: 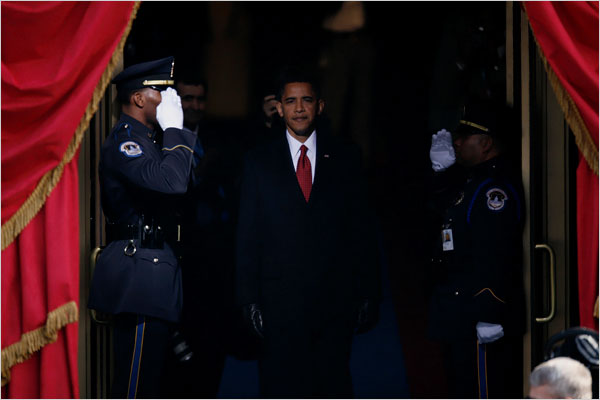 Photo courtesy New York Times
I've been struggling all day with some strange sensations. They've been hard to identify, it's been so long since I felt them in connection with a president. There's a sense of something eager, as if tomorrow is going to be even better than today... my goodness, it's optimism. And this glorious, feel-I-could-fly lightness in my chest... I do believe it's hope.

Like Hilzoy, I don't know how to put this into words. Thankfully, Natalie Walker does:

Pinch me
Is this real
This feeling of release

That's how today has been. I kept wanting to ask people to pinch me. And I felt a little ridiculous, feeling this way over the inauguration of a president. I wasn't going to admit this to you, but I kept randomly weeping. I'd see something like this:

Less than twelve hours after assuming office, President Obama ordered a 120-day halt of the trials at Gitmo. At about 11 p.m., Keith Olbermann reported that Reuters had the story.

This story was posted on the website of the Canadian Press at about the same time:

The new administration of U.S. President Barack Obama has verbally ordered the prosecution to seek a 120-day adjournment in war-crimes cases at Guantanamo Bay.

A commissions spokesman says the order was made through Secretary of Defence Robert Gates. The prosecution has filed a motion with the military commission in the case of Canadian Omar Khadr and those of the men accused of plotting the 9-11 attacks.

and I'd tear up again. I wanted to jump up, punch the air, shout "Yes he did! That's change we can believe in, bitches!" but I was at work, and so I had to refrain.

Photo courtesy Seattle P.I.
Just when I'd gain control over my emotions and return to being the calm, collected tech support rep, I'd click over to Daily Kos in between calls and see something like this:

Science is one of those rare instances where economic stimulus, unity, jobs, social benefits beyond compare, national security, pride, and even a bit of inspiration and hope, all converge. Today, finally, the one missing, essential ingredient lacking in that potent mix -- grand vision and wise leadership from a President that gets it -- is at last officially added to Whitehouse.gov:

Restore Scientific Integrity to the White House: Restore the basic principle that government decisions should be based on the best-available, scientifically-valid evidence and not on ideological predispositions. ... Invest in the Sciences: Double federal funding for basic research over ten years, changing the posture of our federal government to one that embraces science and technology. ... Invest in Climate-Friendly Energy Development and Deployment: Invest $150 billion over the next ten years to enable American engineers, scientists and entrepreneurs to advance the next generation of biofuels and fuel infrastructure ...

Welcome to the pages of history, Mr. President.

and I'd be blinking back the tears once again.

So why am I destroying what little reputation I had left as a hardcore political snarkmeister by admitting that I blubbered like a little girl? It's because I'm not the only one:

I wept. No matter how you feel politically, I can't imagine how anyone could fail to be moved by what we just witnessed. I am a cynic, but I wept. The common misconception is that cynics are merely cold and negative, people who always find the worst rather than the good, but the truth is that every cynic is a frustrated idealist. Only someone who holds an ideal in mind can be bothered when they see that ideal undermined and ignored.

I wept because Obama spoke so eloquently about the importance of those principles and ideals that animate this nation. The only form of patriotism that has ever mattered is allegiance to those powerful ideas expressed with equal eloquence by Thomas Jefferson 233 years ago in the Declaration of Independence, however imperfectly he and the other founders may have applied them.

There will be plenty of time for second guessing, for criticism and for pointing out hypocrisies and failures. But for today, let us all embrace the spirit of this moment. And let us weep.

If Ed Brayton, who's a Libertarian, not one of us far-left liberals, invites us to weep over Obama's inauguration, then by all means, let us weep. Photo courtesy Daily Kos
We now have a President of the United States of America we can be proud of, who is determined to take this country down a different path, who hasn't wasted a second before he's started undoing the abuses of the past administration, who is a tremendous human being and can speak in complete English sentences to boot. All of that would be awesome enough. But there's something a little extra-special for the atheists here, because he's serious about this inclusion stuff (h/t):

By several small choices of word or phrase, Obama made big leaps of inclusivity.

"We are a nation of Christians and Muslims, Jews and Hindus — and non-believers."

Mentioning Muslims and Hindus is a small act of courage. But what other recent president-elect or presidential candidate would have gone out of his way to acknowledge the agnostics and atheists?

Certainly not the one we just waved good riddance to. All of this together tells me that Obama is truly different. We made the right choice.

Obama has swept us all up in this journey. He's thrown the doors to our own government open wide and invited us to walk in, brought us together and encouraged us to work together for a finer world. I was afraid to believe, but now I've seen enough evidence to stop fearing and start believing: the next four years are going to be an extraordinary journey. There will be times when we get lost and argue over whether to ask for directions or try to get the GPS working. We'll get hungry, thirsty, tired and bored. We'll bicker and argue and then stop speaking for a few hours. But those will just be the typical, minor irritations, swept away by the wonders we see on the way.

We can do wonderful things. We've done it before, and now that we've got the right man in the driver's seat, we can do it again. Yes, we can.

Senator Diane Feinstein said it just right as she got us underway:

In a world where political strife is too often settled with violence, we come here every four years to bestow the power of the Presidency upon our democratically elected leader. Those who doubt the supremacy of the ballot over the bullet can never diminish the power engendered by nonviolent struggles for justice and equality like the one that made this day possible. No triumph tainted by brutality could ever match the sweet victory of this hour and what it means to those who marched, and died, to make it a reality.

Our work is not yet finished. But future generations will mark this morning as the turning point for real and necessary change in this nation. They will look back and remember that this was the moment when the Dream that once echoed across history from the steps of the Lincoln Memorial finally reached the walls of the White House. In that spirit, we today not only inaugurate a new Administration; we pledge ourselves to the hope, the vision, the unity, and the renewed call to greatness inspired by the 44th President of the United States, Barack Obama.

And I'm sure you've heard what our President said, but just in case you missed it, here you go:

In reaffirming the greatness of our nation, we understand that greatness is never a given. It must be earned. Our journey has never been one of short-cuts or settling for less. It has not been the path for the faint-hearted - for those who prefer leisure over work, or seek only the pleasures of riches and fame. Rather, it has been the risk-takers, the doers, the makers of things - some celebrated but more often men and women obscure in their labor, who have carried us up the long, rugged path towards prosperity and freedom.

For us, they packed up their few worldly possessions and traveled across oceans in search of a new life.

For us, they toiled in sweatshops and settled the West; endured the lash of the whip and plowed the hard earth.

For us, they fought and died, in places like Concord and Gettysburg; Normandy and Khe Sahn.

Time and again these men and women struggled and sacrificed and worked till their hands were raw so that we might live a better life. They saw America as bigger than the sum of our individual ambitions; greater than all the differences of birth or wealth or faction.

This is the journey we continue today.

In our travels, my darlings, it may be a good idea to remember a Taoist proverb, just so we remember to enjoy ourselves along the way: The journey is the reward.

I can already tell it's going to be the trip of a lifetime. 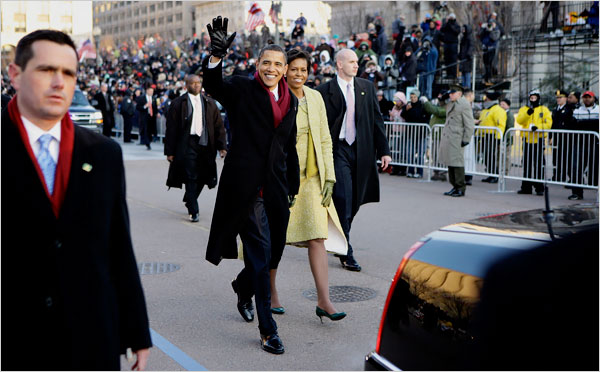 Your in good company :-)
I woke very very early this morning 3AM my time to watch the Inauguration live on TV (something they have never done for any of GWB's swearing in events) and I had to choke back a tear or two, and I'm not even an American.
I think I am happiest that the US has finally come bursting through the former administrations banner of fear and hate and is now rushing headlong onto the world stage as a peer rather than a bully with a bigger stick.
I also think that this is a coming of age event for ALL Americans, and should be looked back on by future generations as the beginning of Americas new Renaissance

AC, this was beautiful! Thank you for celebrating with us!

I really, desperately hope you're right about that American Renaissance. We owe it to the world after these last eight years.

There's a kind of neat thread over on metafilter about the "non-believers" thing.

I had to laugh at one commenter's reply:

"I'm glad others noticed that as well. I myself was offended by it as well. He could've easily said "athiests and agnostics". I'll have to remember when I become president to thank atheists, agnostics, and "non-freethinkers"."

I was glad to be included, rather than offended by use of "non-believers," but "non-freethinkers" sure makes me laugh.

I've been using the term "non-believers" for years to describe us, stevec. It's a good way of including atheists, agnostics, deists, and the truly uninterested in one category. Needless to say, I don't take offense at it.

I'm amazed that anyone would, frankly.