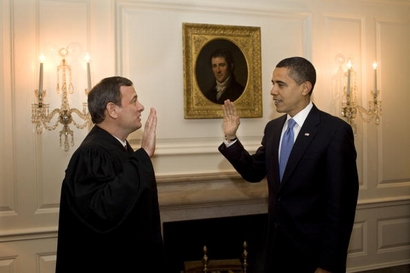 Wednesday evening, Barack Obama was sworn in as president again, and this time he and Chief Justice John Roberts got it right.

"We believe that the oath of office was administered effectively and that the President was sworn in appropriately yesterday," new White House Counsel Greg Craig said in a statement. "But the oath appears in the Constitution itself. And out of an abundance of caution, because there was one word out of sequence, Chief Justice Roberts administered the oath a second time."

A pool reporter was present for the swearing-in. According to the pool report, as Roberts prepared, Obama joked, "We decided it was so much fun..." and later told the chief justice, "We're going to do this slowly." After the two men completed the process successfully, Roberts congratulated the president again, and there was applause. Then Obama turned and quipped, "The bad news for the pool is there's 12 more balls."

There. All sworn in with the words in the right order and everything. Is this enough to make the right-wing noise machine realize that Obama is really, seriously, and for sure the President of the United States now?

Yeah, I'm not holding my breath, either.

Dana, Dana, Dana, will you never learn? The wingnuts will ALWAYS find a reason to claim Obama isn't actually the president. Now it will be that there is no bible being used to swear him in the second time. They can't help themselves, poor dears.

But what about all that stuff he did before he became president proper? That's illegal that is. Plus as he has sworn the oath twice that must mean he's had both his terms! Oh and he's a baby killing muslim liberal black man who isn't even a US citizen...