Spring is here, spring is here!  Life is skittles and life is ginormous rhododendrons blooming all over the place.  My intrepid companion dragged me away from the Muse for an afternoon to go to the Rhododendron Species Garden in Federal Way.  I spent most of the week not wanting to go.  Rhodies don't charm me.  They've got ugly leaves and all they do is hang around looking virulently green.  At least, that's how the ones at work always seem.  I have about as much interest in seeing a garden full of them as I have in picking up hairballs: it's not pleasant, but I sometimes do things I dislike for people I love.

Astoundingly, I ended up liking the rhodies quite a bit.  The buggers put on one hell of a show in the spring.  And the garden's very nicely done - there's much more than rhodies there, and lots of little paths go to interesting spots.  I killed two sets of batteries when I barely expected to snap any pics at all.  And I think you'll agree the trip was worth it.  I mean, just look at this: 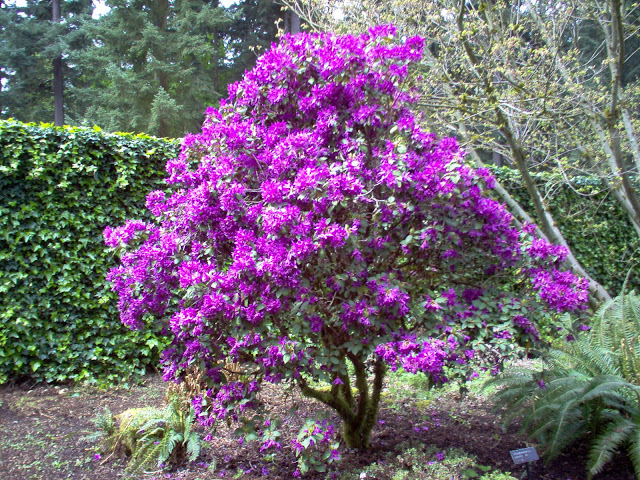 It's very purple!  We loves purple!  And in true Northwest fashion, it's got moss growing on it.  I wish I could tell you what species it is, but my snap of the nameplate turned out too blurry to read.

There's far more where that comes from.  Do follow me after the jump, or you'll miss out on the most spectacular shots. 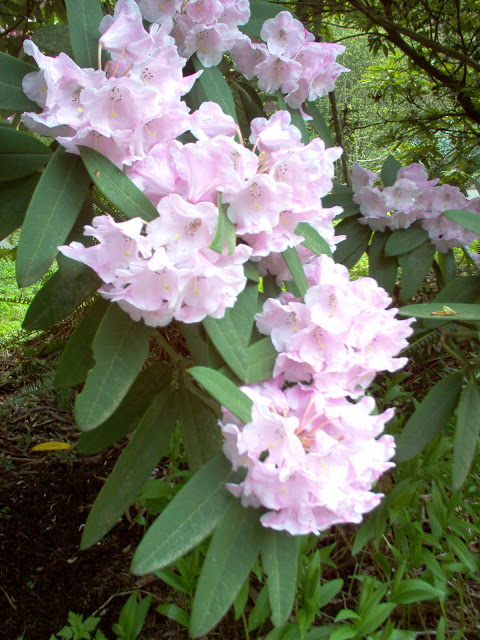 See?  Aren't you glad you followed me now?  If I've matched the right name plate to the right plant, that's an R. argyophyllum ssp. nankingese, or a "Chinese Silver."  I just think it looks like a plant that's been attacked by a mad wedding planner.  O' course, most of them do look like that.

Rhodies are diverse little buggers, and you'll see quite the variety here.  For more information on them, you can click here, and find out all kinds of nifty rhodie facts with which to amaze your friends. 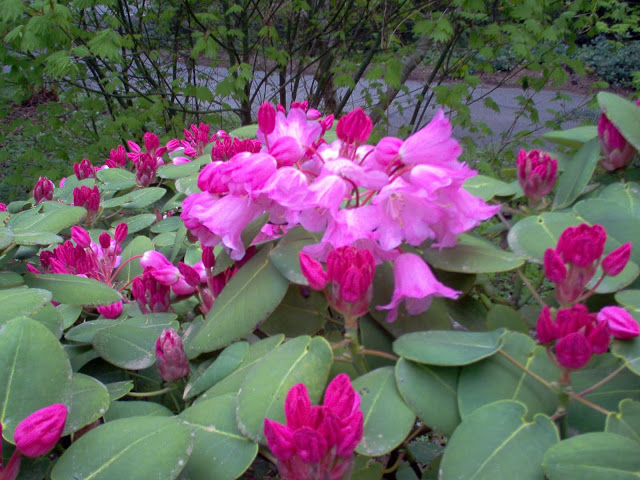 Here is R. orbiculare, which as you'll notice has differently-shaped leaves from the previous rhodie.  I've been on about leaves lately, so that intrigued me a bit.  There are some whose leaves are rather prettier than the usual run.  I like the shapes of these. 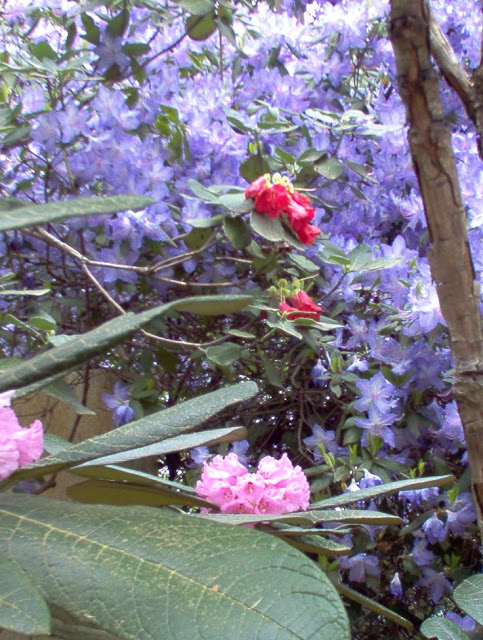 Three-for-one shot!  Look at all the color!  I wish I knew all the species! 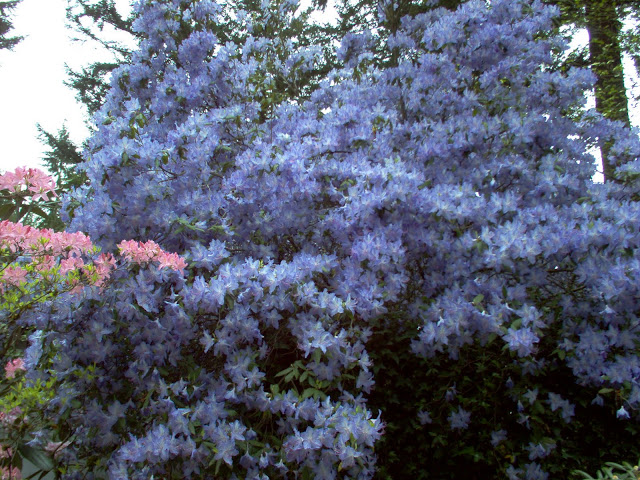 Here's another shot from that same area, which gives you a bit of an idea how enormous that group of rhodies is.  It's tall, wide, and let's just say your whole world fills with rhodie when you see them.  They smell nice, too. 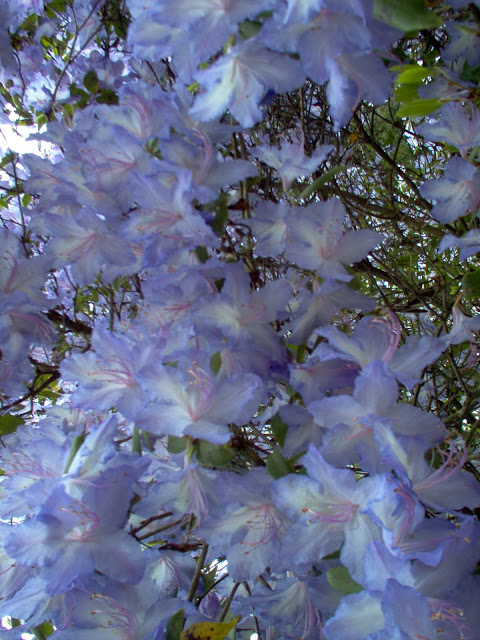 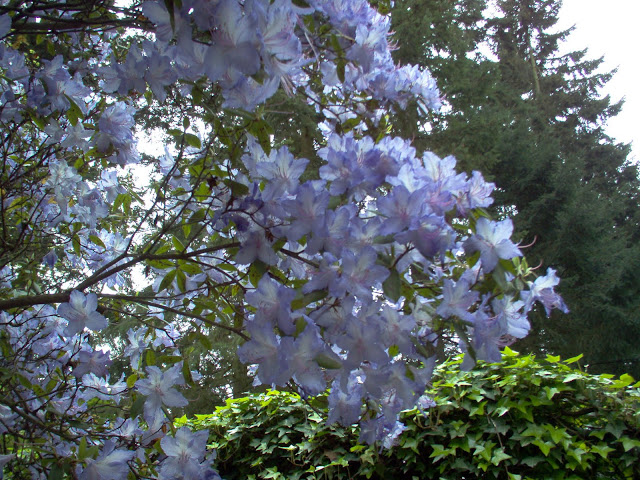 And a shot through the boughs with the pines in the background. 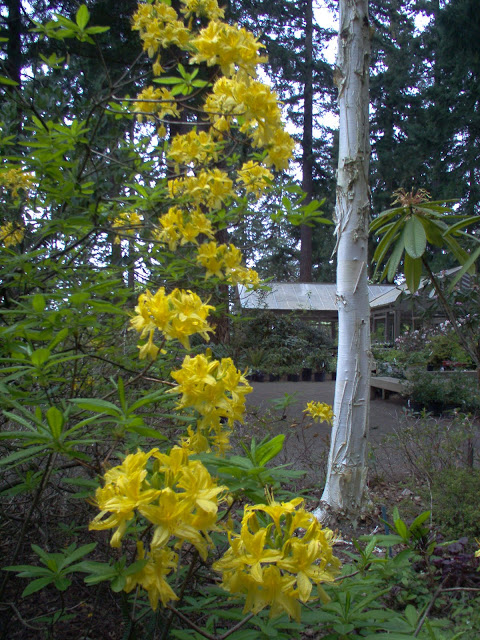 I like this shot - not only for the pretty yellow rhodies, but the paper-barked tree in the background.  I got to pick up a bit of its bark from the ground.  It falls off in little rolls like tiny scrolls and makes a thin-parchment crinkly sound when it's unrolled.  I was charmed.  I get charmed by odd things.  It's a Betula jacquemontii, otherwise known at the White-Barked Himalayan Birch, and I wants one.  I would hold it and squeeze it and pet it and love it, and I would name it Betty, because what else should you name a Betula?  I'd get another one and name it Jacques.  And we'd live happily ever after...

Sorry, got carried away there.  I'm about to get more carried away, because here's a close-up of a Betula jacquemontii trunk: 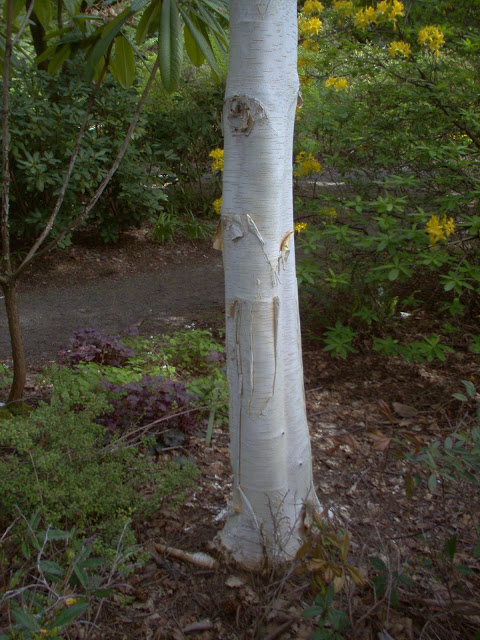 I just find that astonishingly beautiful. 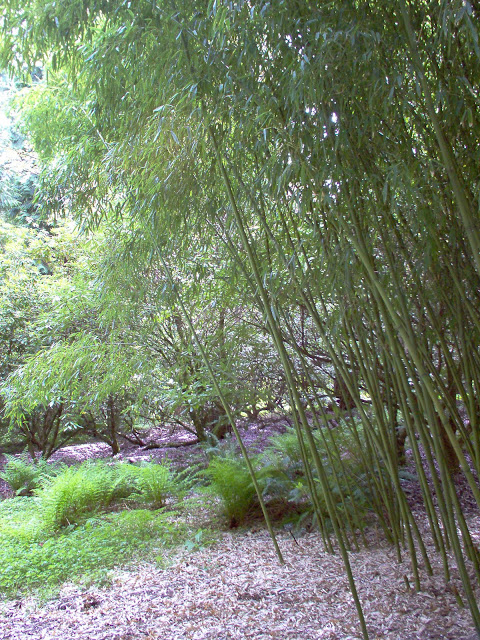 Another great love of mine - bamboo!  They had whole entire stands of bamboo!  I got to go stand up right by it and touch it and listen to the wind rustle through it, and it's a gorgeous, serene sound.  If you've ever watched Crouching Tiger, Hidden Dragon, they caught the sound very well in the scene where everybody's battling in the bamboo forest.  It's hard to stand next to this stuff and think it's really just glorified grass - it's enormous. 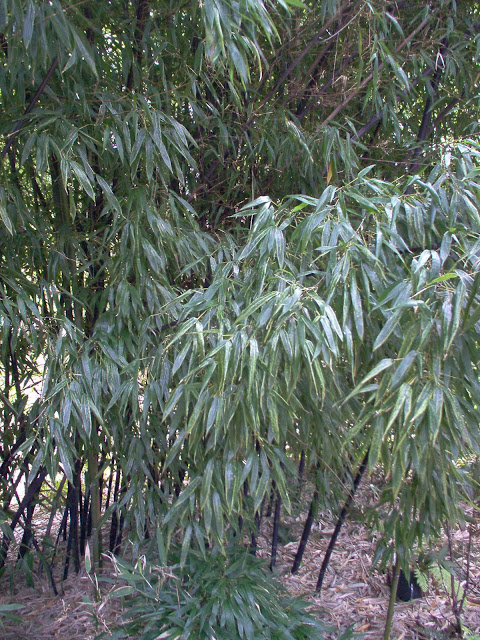 The leaves have got an interesting texture, sort of sharp and dry, and they're a much darker green than you might expect.  The stems were such a dark green they were almost black. 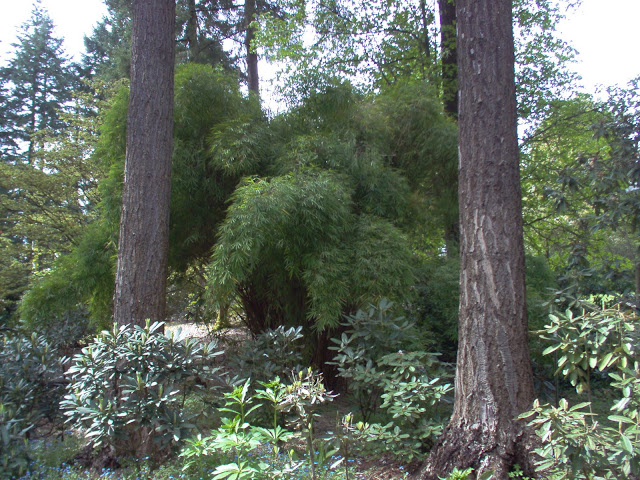 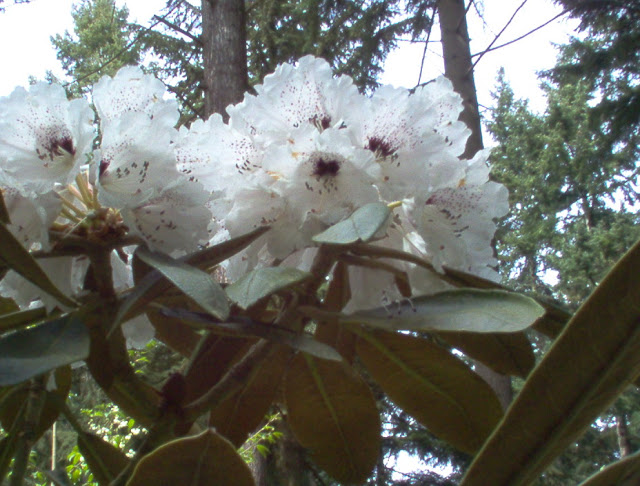 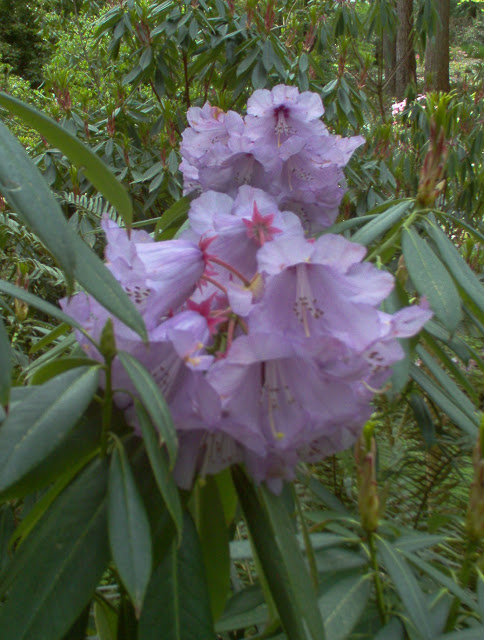 And a pretty cluster of something-or-other.  I like those blade-like leaves.  Remind me a bit of bamboo, they do. 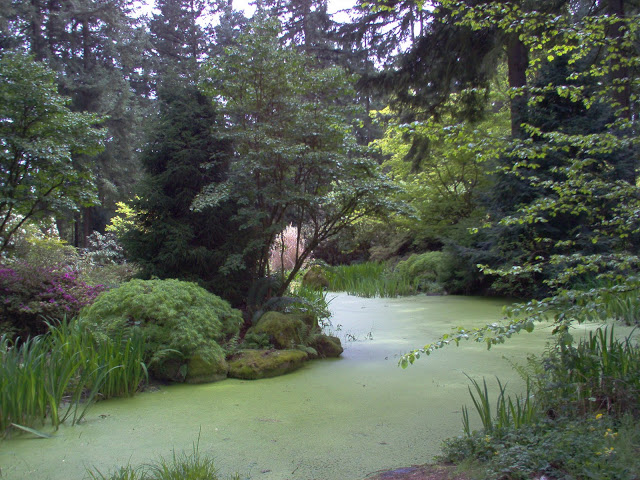 Here we have the pond.  The green sheen on the water is a very tiny little fern that gets very excited about still water up here.  I should have snapped a picture of the sign warning people not to step on a seemingly-solid surface, because it was amusing, and then I'd know what the name of the fern is... ah, well. 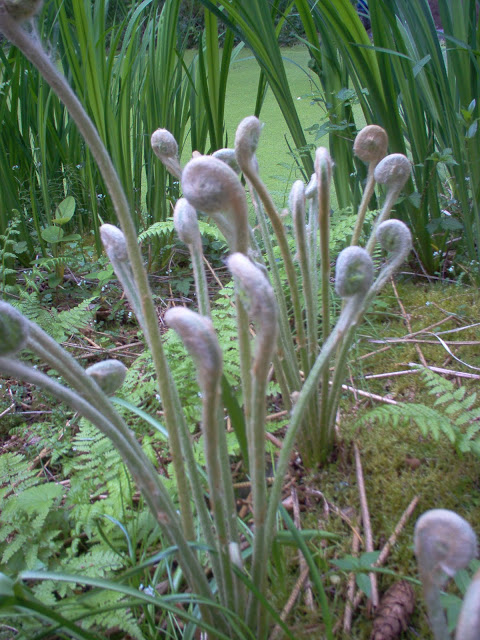 Young ferns!  Interesting how they grow, innit?  These are Cinnamon Ferns, Osmunda cinnamomea. 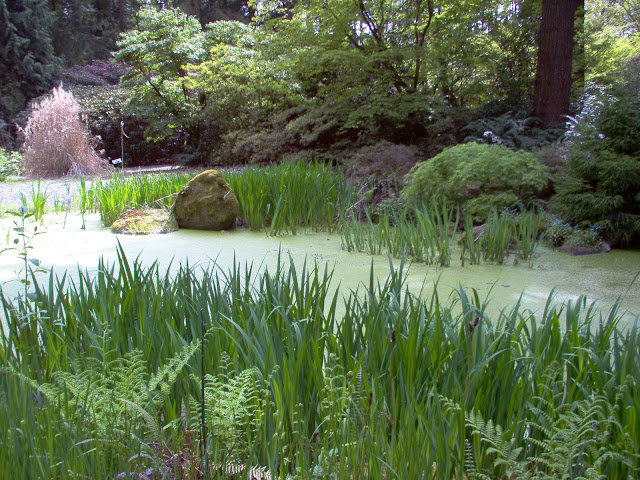 More pretty pond.  Peaceful and lovely, just the way we likes it. 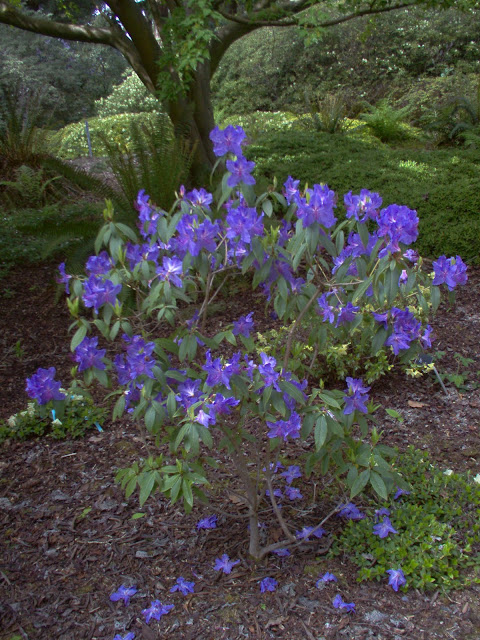 R. augustinii, ssp. augustinii.  I like the way the petals are scattered round it on the ground. 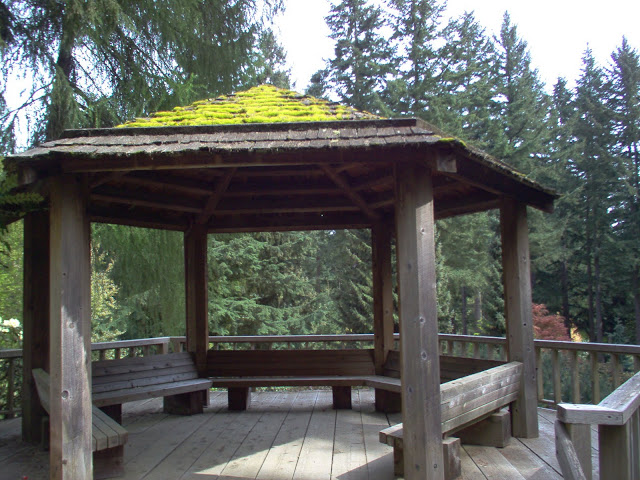 Gazebo!  Every garden needs one!  And in the Pacific Northwest, the moss on the roof is absolutely required. 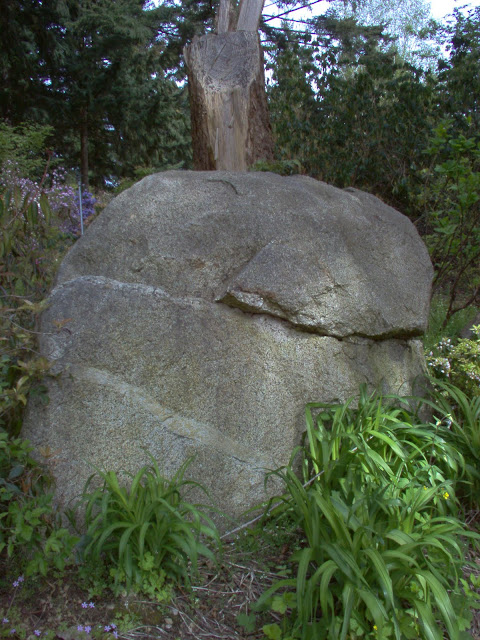 And at the end, a nice, friendly, interesting boulder.  If you click to embiggen, you might be able to see the streak of conglomerate running through its granitey-goodness.  I'm not sure what this boulder's story is, but I'd very much like to know it.

Now, from the pictures depicted here, you may have got the impression the garden's mostly shades of pink and purple and green, but 'tis not so!  Alas, it appears my camera was not in the mood for bright colors, because all the crimsons and salmons and so forths came out blurry.  They looked all right as thumbnails.  We'll just have a wee collage, then, shall we? 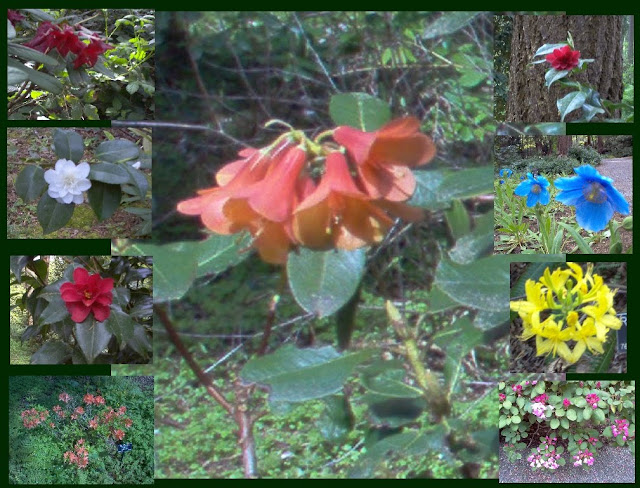 If you click to embiggen that one, I'm not responsible for the outrage your poor photographer's soul might feel.

So there you have it.  Ye first outing o' the year.  Twas fun, and I hoped you enjoyed the results, my darlings.
Posted by Dana Hunter at 12:30 AM

If you're ever in this neck of the woods, do swing by and we'll take you to Duke Gardens.

Some rhododendrons grow to be the height of trees - forty feet or more. So, yes, some can be truly enormous. And while no plant seems to bloom for more than a couple of weeks, with enough of a variety of them you can have flowers blooming all through spring and early summer.

Thanks for the pictures.