Somewhat Famous and Other Stories From The Exile's Life

Ah, my darlings, I can't tell you how good it is to be back.  Not that I'm back much - my hands are still healing, so I'm trying to keep repetitive stress down to a minimum.  But I'll tell you, two days without any typing at all blew leper donkey dick.  Don't know what you've got till it's gone and all that.  I've missed you.

Thought of you constantly, in fact.  I wanted to tell you all about watching Howl's Moving Castle and being very moved indeed by it.  The characters delighted me.  It's been a while since I was truly moved by a set of story folk.  Gave me ideas, it did, and gave me a feeling like I'd been part of something special, and now I'm terrified to watch Spirited Away because it is, by all reports, even better than Howl's, and considering that after Howl's every other movie I watched left me saying, "That was so lame compared to Howl's," that could ruin me for movie watching for quite some time to come.

By the time my DVR rolled round to Sense and Sensibility, I'd somewhat recovered.  Enough to appreciate it, anyway.  I do love Alan Rickman, Emma Thompson, Hugh Grant, and Kate Winslet.  Not so much in to the Jane Austen thing, but still, it's a good movie.  Just nowhere near as good as Howl's.

See what I mean?

I turned to Connie Willis for comfort on Day One of the No Typing Whatsoever experience, and this turned out to be a mistake.  Not that Blackout is a bad book.  Far from it.  What I didn't realize is that it is not, in fact, a full book, but half a book.  And the other half won't be out until October.  And it's literally half a book: it ends at the end of a chapter.  Now I know how the people who were reading The Lord of the Rings as its various parts were released felt.  Nothing's worse than getting to what you believe is the end of the book and finding yourself dangling right over a cliff, loose ends flapping in the breeze, not even the minimal comfort of a series, wherein at least a few plot threads are neatly tied up, there's been a climax and denouement, and all that.

In other news, I've become somewhat famous.  At least, my feet have: 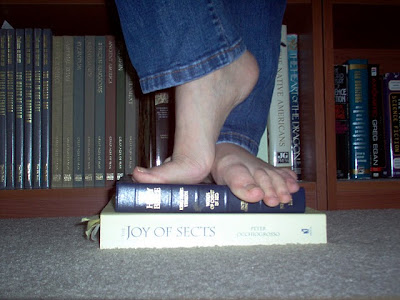 When I saw this submission from entequilaesverdad, the word that popped into my mind was "jaunty." Also, I don't know if you can read the bottom book, but it is called "The Joy of Sects," which cracks my shit up.

I'm now very glad indeed that I had the brainwave that led to me putting The Joy of Sects beneath the Bible for my uncompromising and unashamed stand.  You can see a great many other atheists standing unashamedly and uncompromisingly upon various holy books here, here and here.  Praise be to Happy Jihad's House of Pancakes for giving so many atheists the opportunity to have so much public fun with fundamentalism!

And I have to admit that cracking Happy Jihad's shit up really made my day.

Our own dear Cujo did his own blogging against theocracy, and cracked my shit up by starting with a Monty Python quote.  Read the whole thing, not just the Monty Python bit, because his post includes such gems as this:


Most religions require their adherents to believe some crazy things. Christians are supposed to believe that their religion's founder was tortured and killed in one of the worst ways imaginable, given the technology and medical knowledge of the time, so they could be forgiven for their sins. Huh? This makes absolutely no sense, no matter how you spin it. What makes sense, given what we know of the situation, is that Christ was crucified because people found him annoying and their leaders thought he was a troublemaker.

No doubt, he was insulting the religious beliefs of the time by declaring that he had his own.

When you're done admiring that, go read George's spanking of morons who declare global warming a myth every time it gets chilly outside.  He explains the difference between weather and climate with an analogy even those right roaring schmucks should be able to understand but probably won't.

Right, then.  Must go back to resting the wrists and so forth.  Carry on, my darlings, and I shall see you in a bit.
Posted by Dana Hunter at 12:37 AM

Nice to know you really enjoyed Sense and Sensibility. You made my day ! :)

Miyazaki has a way of doing that. His movies are fantastical, happy, and amazing. Though, not without depressing bits, but, they tend to be resolved. He's an amazing director.
(I do have to implore you to read the original book for Howl's Moving Castle, written by Diana Wynne Jones, however.)

Sorry - Y chromosome got in the way- All I kept thinking is "Sexy Feet". I don't even have a foot fetish!