Well, brain dead, anyway, because how else are they going to transfer money from your wallet to theirs?

Take water.  Just yer basic water.  Now, I've fallen for the SoBe Lifewater scheme, not because of its supposed health benefits but because they add things to it that make it very tasty, and so I can drink something like Strawberry Dragonfruit and pretend I'm not really drinking water whilst still getting hydration.  And did I mention it's so tasty?  There's an adorable lizard, too.  So there we have added value I can taste and see.  But for other water needs, tap water run through a Brita filter works just fine.  It is healthy and cheap, a winning combo.

However.  It seems no item we put in our mouths is free from quacks.  I need to get Chaos Lee back here to tell you about that time he worked for a call center that took orders for infomercial products.  One company that contracted with them were selling "ionized water," claiming all sorts of incredible health benefits.  During the meeting in which the company was extolling said benefits in order to make order-takers all excited about it, Chaos asked them unnerving questions based on basic chemistry, which ended in them claiming it was ionized because it had an extra neutron.  "That's not ionized water," Chaos said.  "That's heavy water."  Upon which the sales rep became upset, perhaps because health nuts might be hinky about buying something used to cool nuclear reactors.

But these days, "ionized" may sound a little too chemical, and we live in a society so obsessed with going chemical-free that some people market, with a straight face, a "chemical-free chemistry set."  Deborah Blum had Things to say about that.  And this.  After that last episode, I really hope she doesn't hear about this newest craze, because she might do herself an injury.  Still, the resulting blog post would be entertaining.

The newest craze, it appears, is for "organic water."


Perched on a white tablecloth we noticed some very sleek water bottles, labeled Illanllyr SOURCE. A serious guy named Eric Ewell eagerly offered us a taste, "Try this pristine organic water." We choked back a giggle. Organic? Really?
As the company's website says, "Illanllyr ... comes from our sources beneath certified organic fields in west Wales in the UK." So, Ewell says, the water has never been tainted with chemicals, making it organic as it as it emerges from the ground.

Now, when I hear the word "organic" combined with "water," I'm thinking of organic matter like cow shit floating around in it.  Especially since it's beneath "certified organic" fields.  Already not really getting the super-healthy vibe.  And while the website touts the water's location beneath a farm that's never been farmed any other way than "organic," thus supposedly ensuring the water is "organic" by proxy, those of us who know our geology are wondering about the details of the aquifer it comes from.  Water has this distressing tendency to travel, and who knows what non-organic ickyness it's toured through?  I mean, really.  Never?  Never ever tainted with a single chemical?  Not in the whole history of the earth?  The gentleman has as much to learn about the water cycle as he does chemistry.

I notice Mr. Ewell or his staff have very carefully not put those "not tainted with chemicals" claims on their website.  Someone seems to have realized that their water does, in fact, contain chemicals.  They call them "minerals," so as not to scare the anti-chemical crowd away, but it's loaded with 'em: 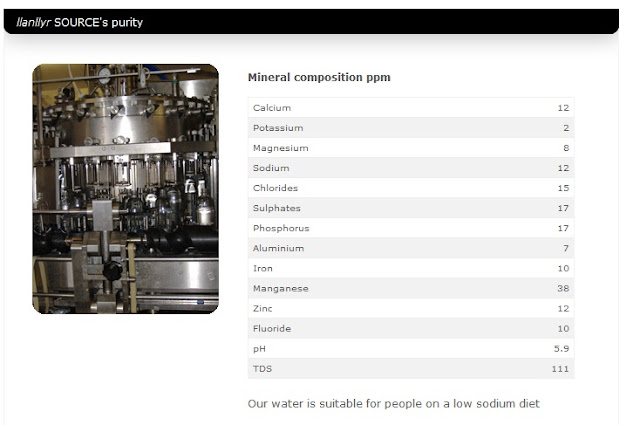 As for his "never been tainted with chemicals" claim made in person, I hate to break it to him: minerals are chemicals.  So, in fact, is H2O.  That's two hydrogens and an oxygen, bonding into a water molecule, which is (cue scary music) a chemical!!!eleventyzomgwe'reallgonnadiiiiieeeee!!!!!!!

And if you purchase it from Mr. Ewell, a very expensive chemical it is, too.

But let's get back to this "organic" claim.  Those of us who aren't instinctive chemists have skimmed that word, thinking of it in the colloquial sense of "what you tell people something is so they'll pay twice as much for it, believing it's all-natural and much better for you than that non-organic shit."  But of course, chemists are already prone on the floor, pounding their fists in the carpet and laughing helplessly, and Ed Yong is horrified: 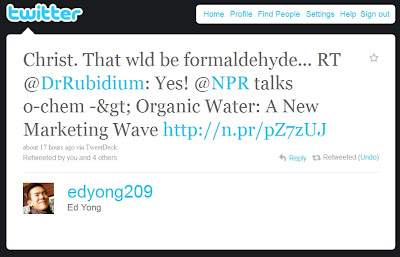 When I read that tweet, I fell on the floor pounding fists into carpet, etc.  I may not be as well-versed in chemistry as I should be, but I do know that in chemistry, "organic" means "it's got carbon in."  Now, let's see what we get when we add a little C to our  H2O, hence making it organic: 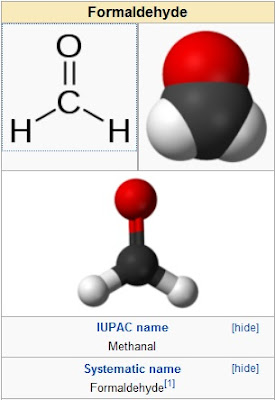 So, my darlings, remember: no water on earth is organic, and if you ever have the pleasure of someone trying to sell you "organic" water in person, you are now free to ask them why they think one of the main ingredients in embalming fluid is so much healthier than plain ol' dihydrogen oxide.

The thing that comes to mind when someone mentions "organic" water is that it must be loaded with bacteria, or something even more unpleasant.

Set a gallon of water out in the sun with four or five teabags. Use whatever tea you like - even green tea. Hours later, put in fridge. When cold, pour in glass (or used clean Sobe' bottle!) 2/3 full and top off with your favourite fruit juice - cranberry, grape, mango, whatever. Result? Better than anything Sobe' ever put in a glass bottle at a tiny fraction of the cost. And you can experiment to fine-tune it.

Husband and I own a little getaway house in a VERY rural area. It sits on an alluvial fan above solid granite. It's never been farmed, though the previous owners cleared the sagebrush and planted some water-loving trees. (I'd rather have the sagebrush.) So the "organic" water we get from our well is high in iron and other minerals, and needs to be tested for bacterial contamination annually.

Quite honestly, as much as I like the getaway house, I prefer the city water of my main residence. It's getting monitored with some frequency, and the city understands it has a duty to provide safe water. In the country, I'm on my own.

Oh, and as regards "improved" water -- I very much like Costco's Kirkland Vitamin Water. Not for the vitamins -- I take a multivitamin and eat my veggies -- but the flavors are delightful. Also, sweetened with Splenda so no calories.

I prefer ethanol over formaldehyde for my organic water. Ethanol is much more fun, and produced by entirely natural processes. Time for another beer...