So I meant to do lots of stuff today.  Really did.  I was going to complete my drumlin research, and play around in Scrivener, and clean the house, and email people, and maybe get to some other things that have been clamoring for attention.

The walk up the creek takes about two and a half hours.  It's about an hour transit time round trip, half an hour spent taking pictures of flowers, and an hour waiting for the birds to do something interesting.

Up by the buildings where I work, there's a bridge, and a wide area in the wetlands, and a tree I shall henceforth dub the Big Boring Bird Tree.  It's the same tree in which a bald eagle sat, doing absolutely nothing, for the duration of my visit, after having altered me to his presence by flying majestically across the road.  And the exact same thing happened this time, only here it was a heron.  The thing was bloody enormous, and fast: by the time it had flown to its new perch, I'd only just got the camera out.

And then he proceeded to just sit there. 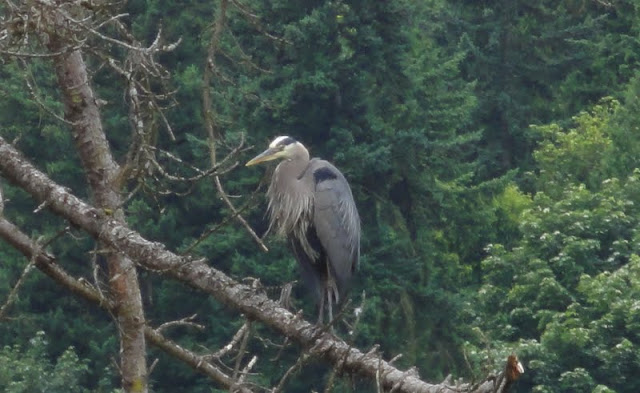 Lovely, I grant you.  And it was interesting seeing a heron in a high perch - I'm used to them being down near the water.  But an hour of watching a heron groom itself palls.  Even when it has no head: 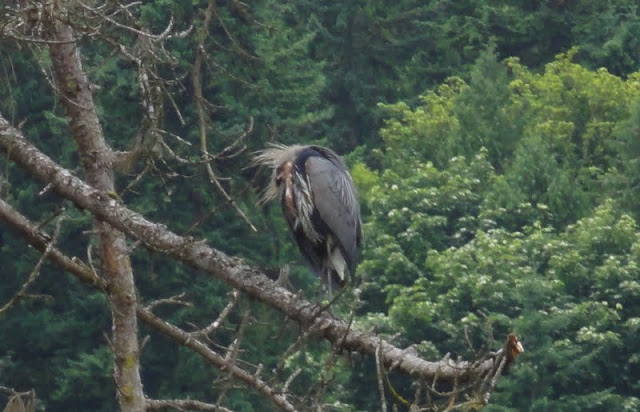 I had to amuse myself somehow.  Most exciting thing that happened was when it got an itch: 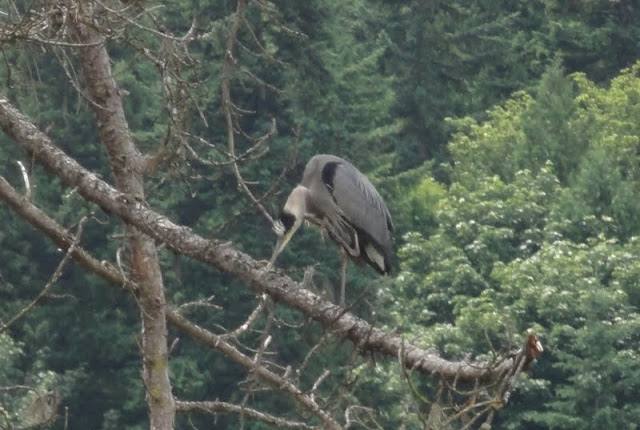 And then the sun broke through the clouds, and lit it up a bit: 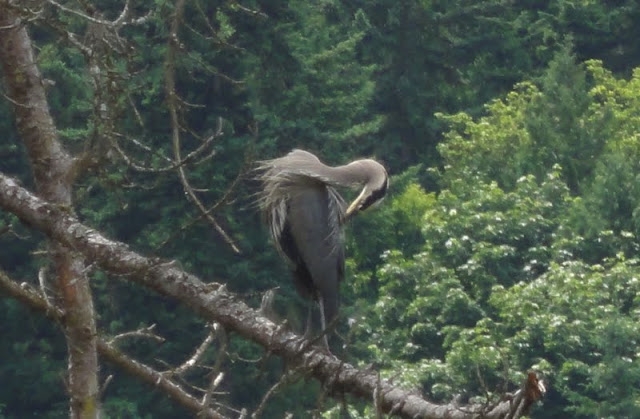 And then it decided to look majestic again for a split-second: 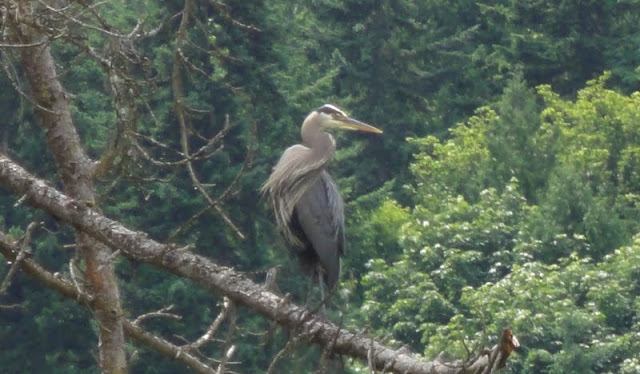 I'll spare you the rest of the five billion pictures I have of a heron getting really thoroughly clean.  After a while, I decided I had enough for a full treatise on heron hygiene, and left. 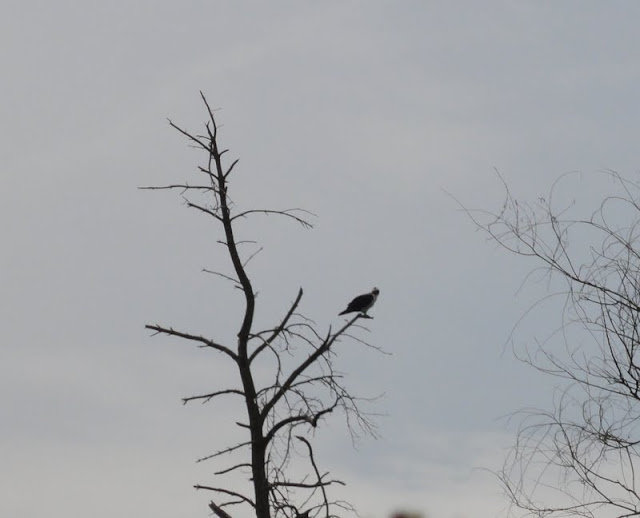 It was certainly some sort of raptor.  Flew off with a golden-brown wingspan of breathtaking proportions, and at exactly the time I didn't have the camera aimed in the right direction.  Bastards.

Got a nice picture of a crow, though: 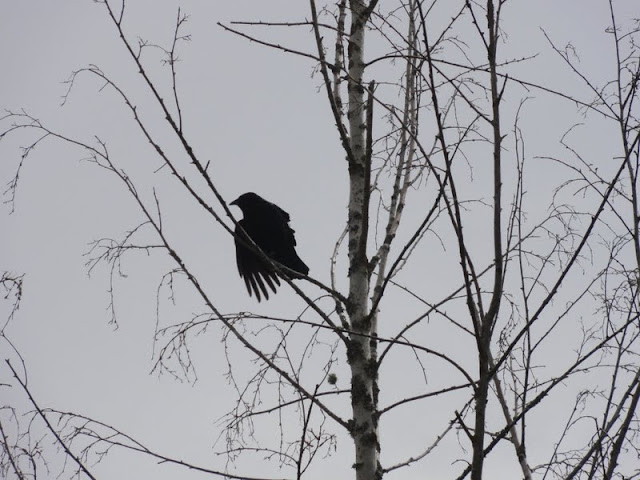 Don't let the sky in these pictures fool you.  There were quite a few breaks in the clouds, and I was sweating to death by the time I'd reached the civilized stretch of the creek again.  All I had on my mind was a nice sub from the Quiznos on the way back, and something to drink, and letting the kitteh out to absorb some rays, and then ZOMG BABY DUCKIES!!!1!!11!! 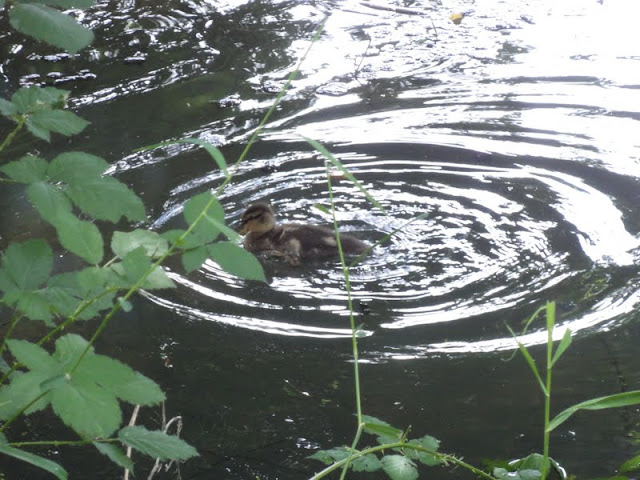 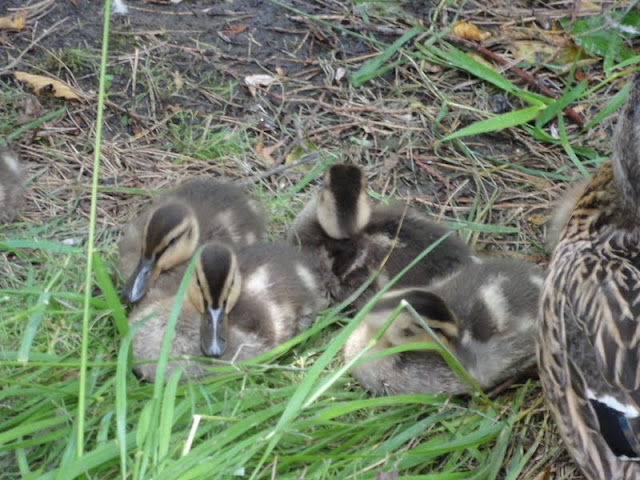 Mama wasn't too terribly pleased with a hoomin hanging about shooting pictures, but she allowed me to do it, and even posed with her family: 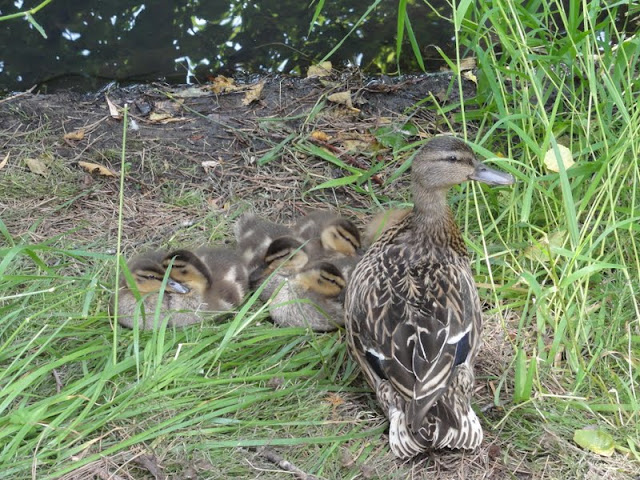 And look, one is yawning! 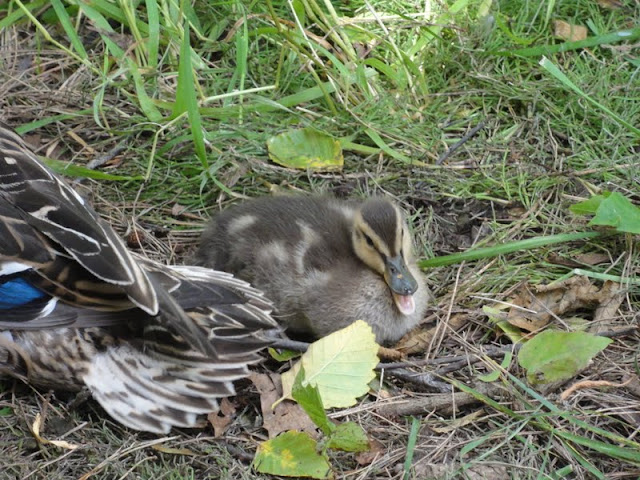 So precious!  They're all so cute and fluffy! 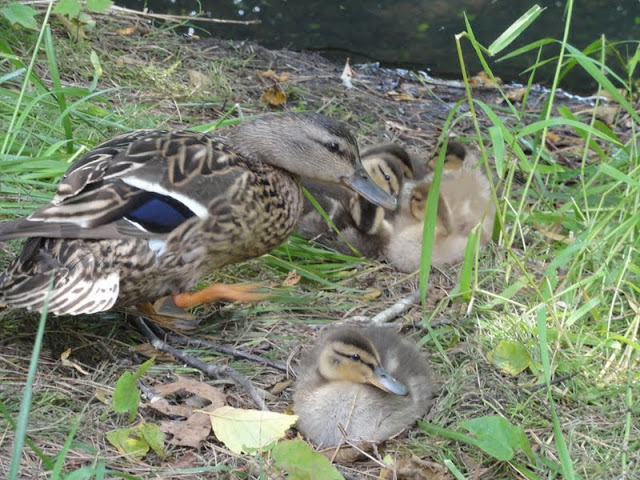 So yes, I walked away from that with my heart full of cute fluffy things, and got my sandwich, and went home to a cute fluffy thing who thinks my only purpose in life is to let her out on the porch and keep her food and water dishes full, and I climbed into the lounge chair in the sunshine with Neil Gaiman's Odd and the Frost Giants, and all of the things I was supposed to be doing can bite me, because baby duckies!
Posted by Dana Hunter at 12:21 AM

sounds like a wonderful sunday dana. that dayamed to do list will be there tomorrow. i have learned to accept that the list will never be done and things will always be added to it.

Duckies are nature's way of something something AWWW CUTE.

Yeah, they just sort of turn my brain off. I'm okay with that! As for the Potential Eagle, I've run into ID problems in this area before. At a distance, especially from certain angles, I'm betting it's difficult to tell eagles apart from ospreys. They're both HUGE birds with brown wings and white heads. Ospreys have white underbellies, though, so that can help. They're comparable in size, though eagles definitely get larger.