River Walking Parte the Second: What I Have Against the Skykomish

Every time we go out on a new adventure, I tell myself very sternly, "Dana, you have already got rocks.  You have got lots of rocks.  Rocks are, in fact, threatening to outnumber the books.  You will have to move someday.  It will cost you roughly $4,000,000,000 dollars to move the books and the rocks you already have.  So stop picking up rocks.  Okay, maybe just one rock, but only one."

And when we went to Al Borlin Park, I thought, "Oh, good.  It's the lowland part of the river.  Should be mostly mud and sand.  No chance of rocks there." 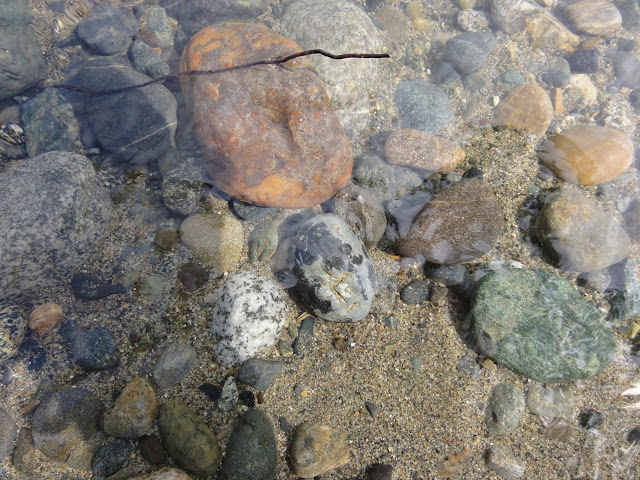 The number I ended up with has a one in it.  Unfortunately, the one is followed by an eight.  And it's only in the teens because a) I asserted some self-control and b) because some of them would have required a forklift.  I didn't have a forklift with me.

The Skykomish River drains the Cascades, which are a wonderful mish-mash of metamorphic and igneous goodness.  It is a powerful river, which you'll see in our next installment.  And its drainage area and power combine to bring down crazy cobbles of the most delightful kinds, many of which I'm at a loss to identify, but this does not stop me from coveting them.  Loaded with geologic treasures, the river then hits that nice lowland, loses the energy to carry anything larger than sediment and pebbles, and dumps the lot in its bed and along the banks and in enormous gravel bars full of cobbles.  During their journey, the rocks have become nicely tumbled, and when they're wet all their colors and textures really pop, and all of this combines to weaken far stronger wills than mine.

Below the fold, I present to you pretty rocks.  I cannot with confidence identify 90% of them, so I'm just going to emphasize pretty rocks!!  If you see one and say, "Ooo, I know that one!" please do enlighten me in comments. 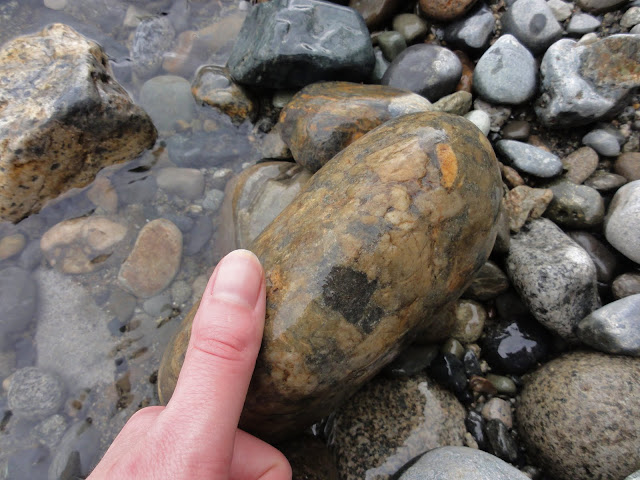 I actually left some rocks behind.  This is one.  But I really liked the texture of it and that big black blotch. 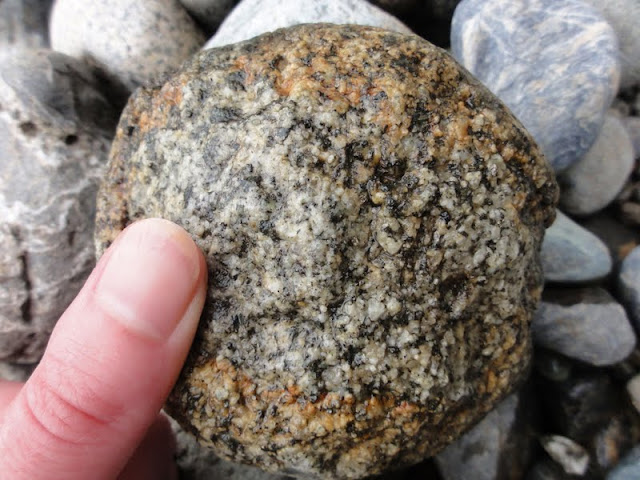 This one would seem to be a member of the granite family.  I didn't bring it home, either - I've got a ton of granite - but I loved the texture of its crystals.  All sort of sugary and large and sparkly.  Something had whacked it, exposing the unweathered interior.  Just lovely. 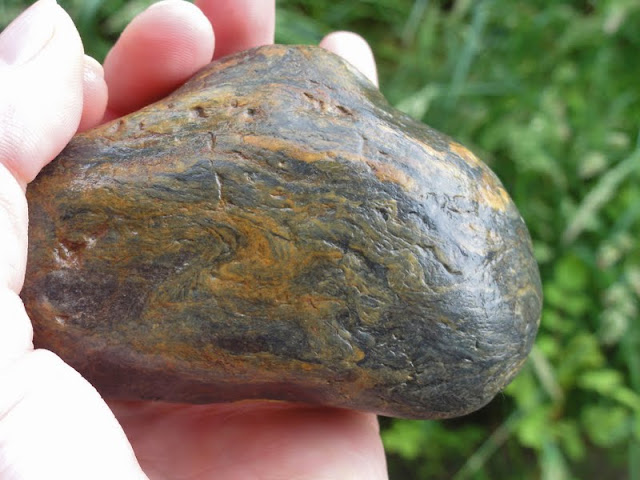 This one did come home with me.  Obviously metamorphic, lovely swirls and folds, and check out its other side: 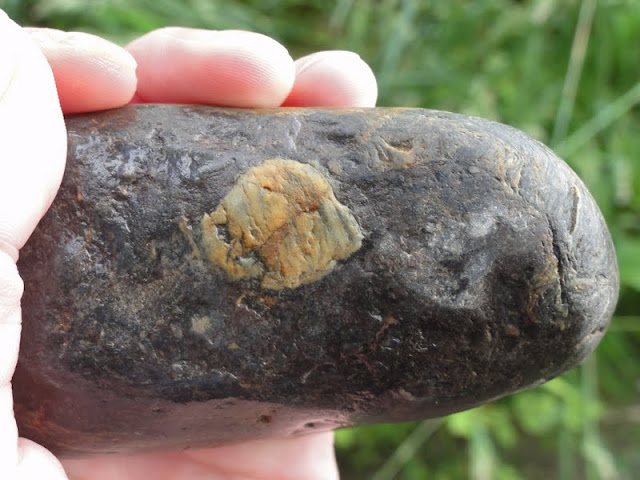 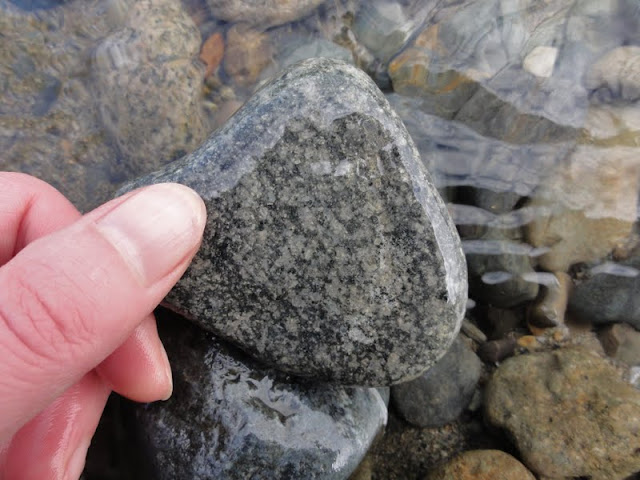 I suspect this of being another member of the granite family, but might also be something subjected to a desultory bit of metamorphism.  I suppose breaking it in half and studying a fresh face might have been more informative, but I didn't bring the rockhammer on account of believing there wouldn't be enough rocks to pound on.  And I honestly don't know if I could've brought myself to whack it.  I'd make a terrible professional geologist: "But it's too pretty to break!" 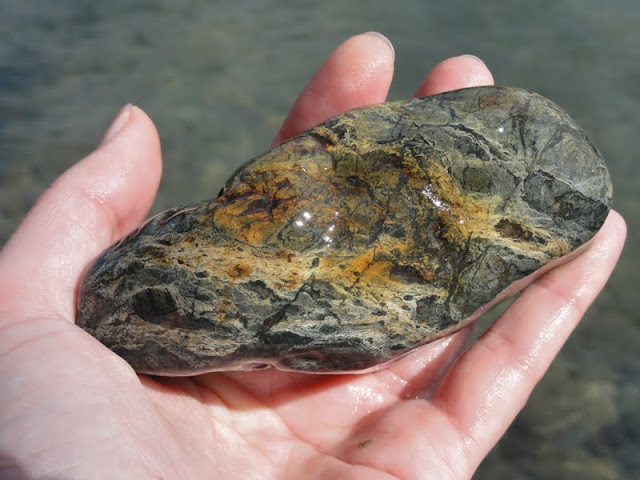 Speaking of too pretty, just look at that beauty!  Another one where I can't even hazard a guess beyond "something metamorphic," but the colors and textures of it are just mesmerizing.  And yes, it followed me home, and I am keeping it. 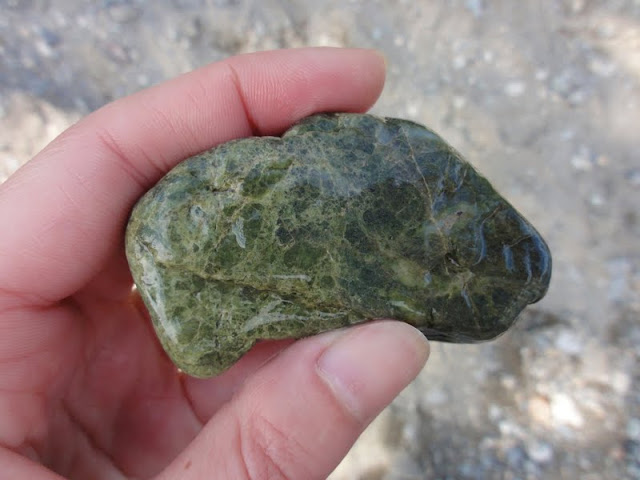 This is green.  I mean, really green - the photo couldn't quite capture its greeny goodness.  No idea what it is, but it's quite hard and extremely friendly.  In fact, it's sitting beside my chair in a very friendly manner as we speak. 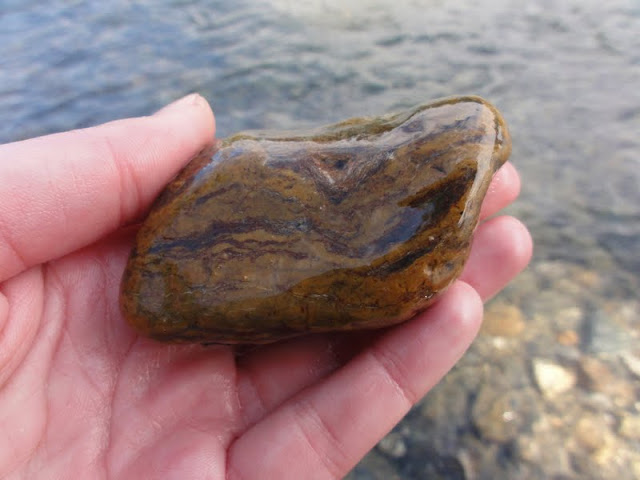 This one isn't.  I probably should have brought it home, because it's sort of red, and I could have put it out with the green one at Christmas and been all holiday-spirit.  Ah, well.  I'm sure I shall find lots of red rocks this summer.

I think you can see the hazards of this stretch of the river for a geology buff.  And this is merely a small sampling of all the temptations set before me.  It would have gone very badly for me indeed if I'd been able to wade out to the gravel bars.

Just you wait until we get out by Gold Bar, where the river has left ginormous chunks of the most astonishing rocks, some of which I can even identify.  In our next installment or two, we'll be discussing where all this metamorphic stuff comes from and what sorts you can find.  I'm also going to show you the power of a mountain river.  Prepare for whitewater and very wild geology, people.
Posted by Dana Hunter at 12:19 AM

i love that green one dana.... dayam, even i wudda taken that one home and i'm not a rock collector

Moving tip from a kindred spirit. In a partially-reimbursed company move, it is well worth it to rent a haul for books and rocks.

Movers charge by the pound and moving books and rocks yourself will allow your spouse's piano and beloved dining set to also make the trip...

My husband brought me a green rock once all certain that the vibrant green-ness of it would make it easy to identify. I laughed and told him we had either 1 or 2 full class periods devoted only to green rocks in my mineralogy class... :-)

That is a pretty one, though!

Your second rock looks like you could have picked it up on my property in the eastern Sierra Nevada! I'll go out on a limb and guess it's a granodiorite.

The rest... well, they're very pretty!

I too collected rocks in the mountain streams in Kashmir and around India. I was only 12 though and after lots of crying my mom threw them away. I still miss them.

I think the second, somewhat darker intrusive rock may be more diorite than granite.

The green rock looks like a breccia. You'll have to ask it how it got that way!