Scenes from the Sound

This summer hasn't been all that summery here in Seattle, so when the sun peeked out briefly on Monday afternoon, my intrepid companion and I scurried down to Carkeek Park in hopes of catching it.  We did.  And, bonus, I only came home with fourteen rocks this time!  One of them is a hefty chunk of what I'm almost certain is serpentinite.  If the sun ever comes out again, I'll show it to you.

I love that rock with an unreasonable passion.

Anyway.  Lots of photos of interesting rockage to show you soon, but I haven't got them ready, so you'll have to settle for pretty pictures instead.  Poor you.  I treat you so badly. 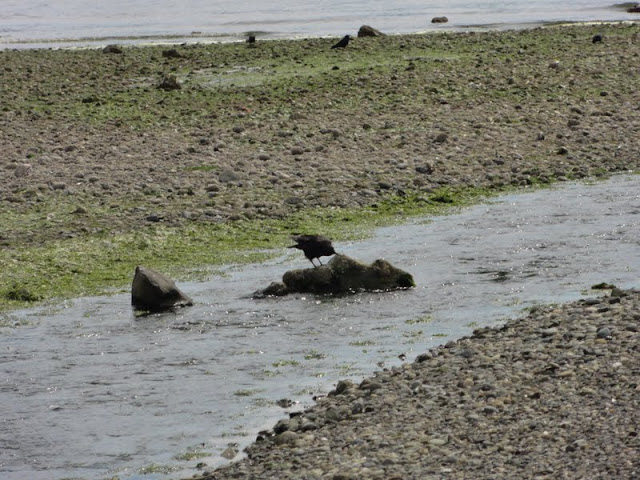 Piper Creek flows out to the Sound here.  For some reason, there weren't many seabirds but a huge number of crows.  I have no idea what this one was doing, but what a pose, eh?  And the rock it's on has an interesting shape.  It puts me in mind of suiseki. 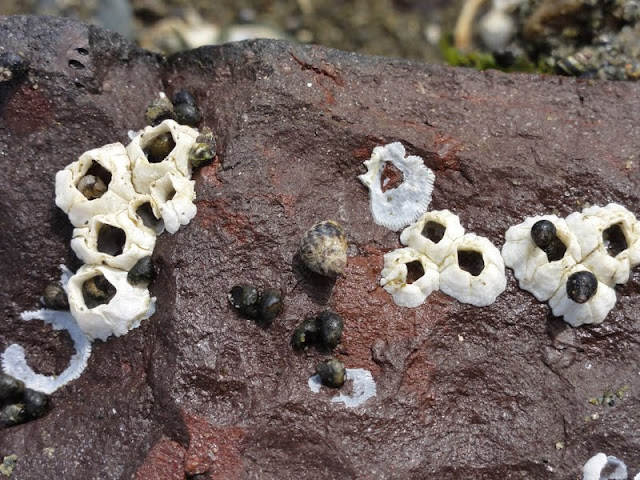 Critters on a brick.  I have this abiding fondness for snails, don't ask me why.  Maybe it's because we brought a wild snail home from the lake once, and found out he was a he and our domestic snail was a she because of all the little baby snails that resulted.  There's nothing like a tank full of baby snails to warm your young heart. 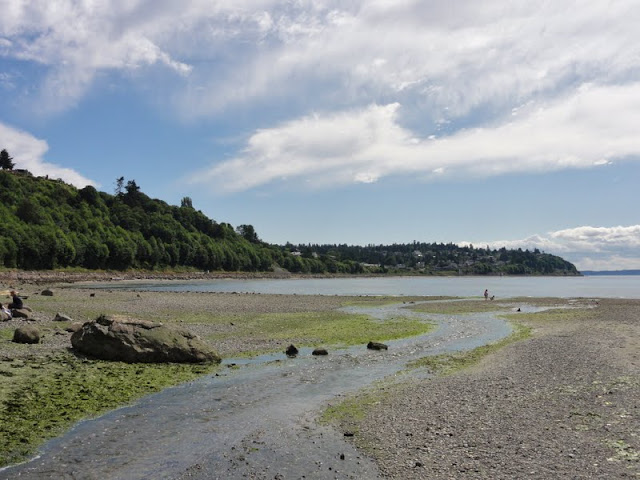 Looking south, you can see the mouth of Piper Creek and the lovely bluffs that bits of Seattle are built upon.  There's a lot of geology in them thar hills, but you can't see it for the biology, alas. 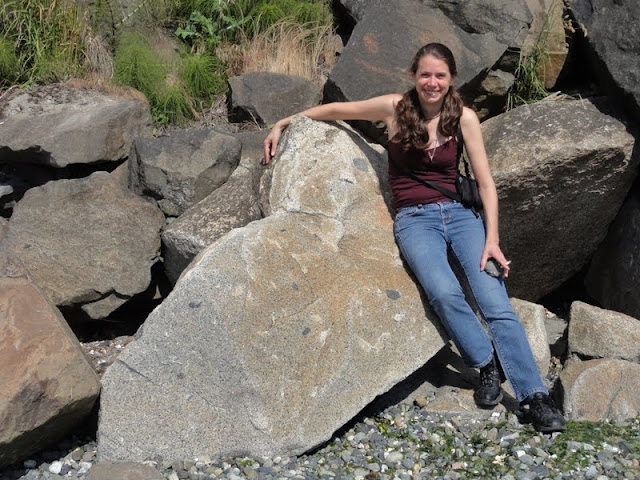 Ah, here I am with one of my pride and joys: a lovely chunk of granite or granodiorite with what look for all the world like gabbroic xenoliths.  I've been on the lookout for xenoliths, and these are the first undoubted ones I've seen in some time.  And - AND - I found one in a hand sample!  It's sitting right here beside me, and I love it.

My intrepid companion was glad I found that rather than making him haul this boulder home. 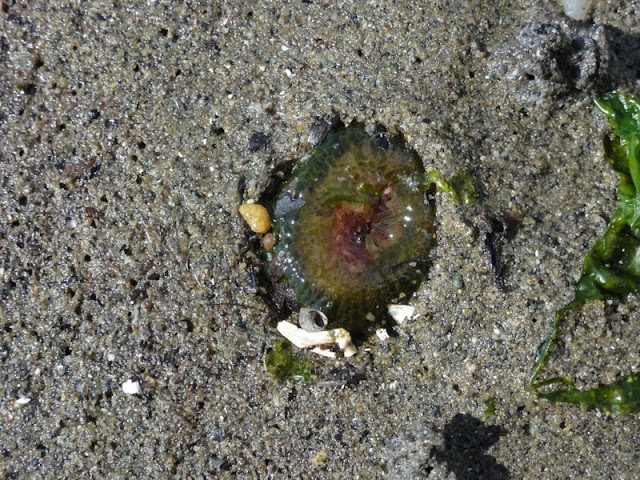 Jellyfish!  More colorful than the ones who usually wash up round here.  Possibly he's lying atop something reddish, but I have no idea what.  The green is seaweed.  I love these little jellyfish.  They sparkle like diamonds in the sun. 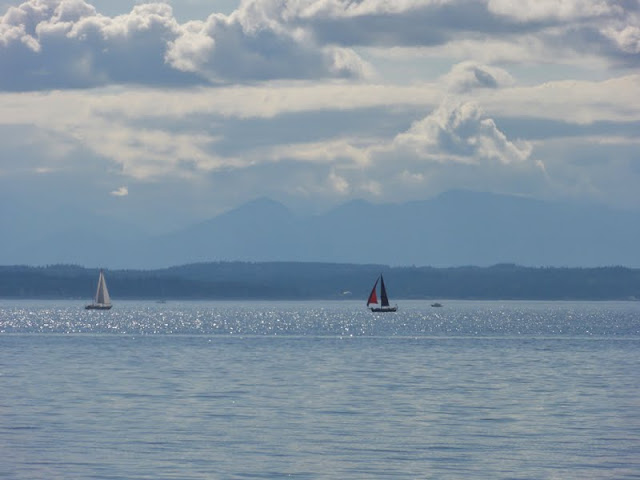 A red-sailed sailboat gliding by the Olympics.  Most of the sailboats out and about had white sails, so this one stood out.  I wish the Olympics were more than silhouettes against the clouds, but it's Seattle.  We're lucky we could see them at all. 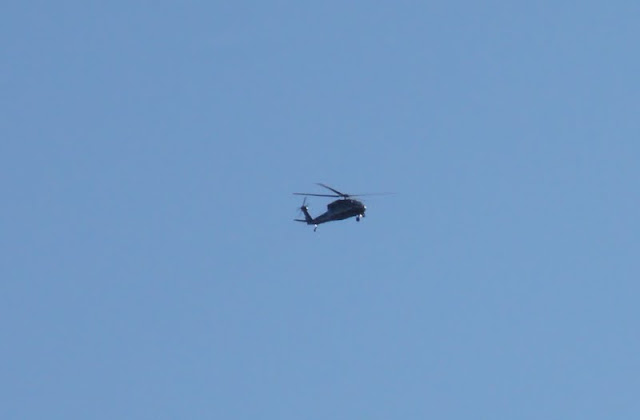 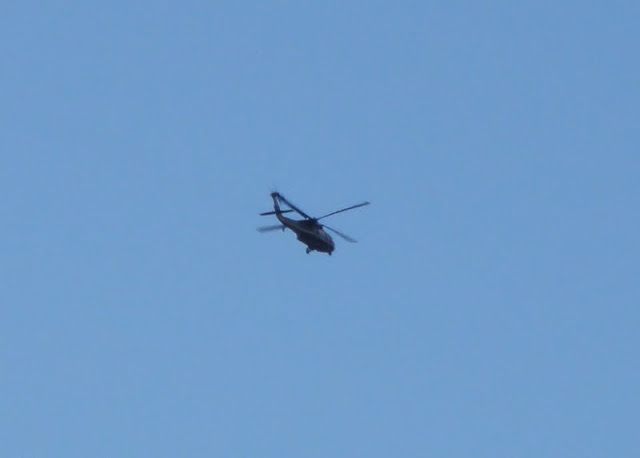 I believe my intrepid companion said this was a Blackhawk.  Not like I'd know.  I know it's a helicopter, and it's black and very cool, and that's quite enough to satisfy me. 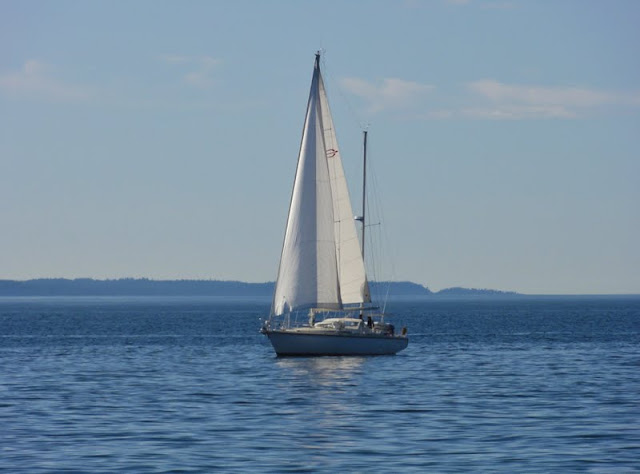 Lovely sailboat right up close.  Most of them were distant.  This one, of course, sailed closer to shore right as the Sounder hove into view, so it was a frantic moment of snap-a-pic-spin-around-and-catch-the-train.  Why this couldn't have shown up in the half-hour we waited for the Sounder to show up, I dunno.  But I did manage to get turned round in time to catch a very snazzy video of the Sounder rushing by.

This makes it look like we were insane close, but we weren't quite as close as it appears.  Wonderful view though, eh? 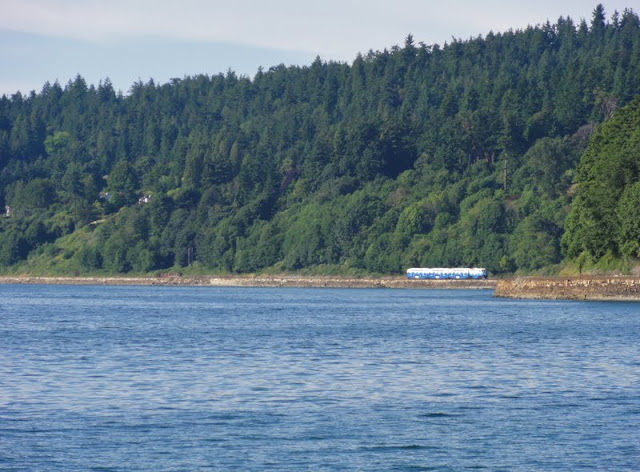 And away it goes up the Sound toward Richmond Beach.  If that wasn't enough train, click the link and have some more.  We got lots last year.

We didn't stay for sunset - too hungry, too thirsty, and the kitteh needed to be sent out on the porch before the sun went completely away - but we stayed long enough for a lovely little glitter path to form, and the clouds and sky and Olympics and sailboat and glitter together make up for missing a sunset at least a little, don't they just? 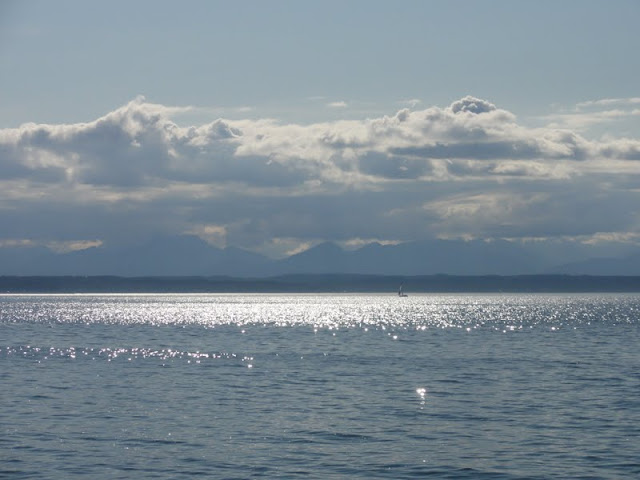 Beautiful pics. I love sailboats. Learned to sail once, but I make a terrible sailor; I spend my time on the water leaning over the leeward rail, losing my lunch.

I want to see that serpentinite!

Lovely scenes from the sound. The scenery around the Piper Creek is pretty. Wonderful critters and photos.