I understand the desire for a more civil discourse. Most of us would like that (except for the trolls, one supposes), but a "real name" policy isn't the magic cure that will make everyone nice. Allow me to direct your attention to what people feel perfectly comfortable doing under their real names: 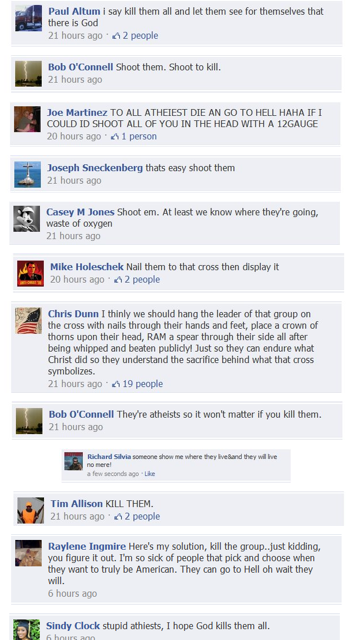 Ah, yes. Very civil. A shining example of the kind of respectful discourse one can expect when everybody knows everybody's real name, isn't it?

We've seen your arguments as to why real names are necessary, and Facebook has disproved very nearly all of them. Those Facebook hasn't managed to provide demonstrations against are taken care of at the previous link. And I'm sorry, but your civility argument was so full of holes it could be used to drain spaghetti to begin with, and since then several people have hit it repeatedly with birdshot. I think there are some scraps left there somewhere, but they can't be scraped together into anything usable now. Real names do nothing to rescue teh intertoobz from civility problems. People are too adept at being rat bastards for anything like a real name policy to stop them.

Ah, you say, but there will be consequences! Because, y'know, bosses and stuff will know who's saying what, and they'll get caught, and everything will be happiness and rainbows.

That may be true in a subset of cases. A few people may have to pay a real price for bad behavior. Lovely. Meanwhile, the bad behavior continues apace, because the chance of suffering consequences is so damned remote. And folks like, oh, lessee, Bob "Shoot to Kill" O'Connell and Joe "12 Gauge" Martinez are free to continue spewing their hate and death threats on real name forums like Facebook and Google+ while people like Bug Girl and GrrlScientist are shut out.

I hate to tell you this, but the civility problem will never be solved. There will always be a subset of rotten jerks in any given population. The band-aid of a real names policy does nothing but give you the illusion things will be hunky-dory.

You yourself are going to have to take some responsibility beyond "real names!" to solve the civility problem. You'll have to flag people who are being wildly inappropriate (and not just because you don't agree with them, or don't like their way of putting things, but truly bad, outrageous, nasty behavior). You'll have to block those folks who make you feel icky inside, whose actions haven't reached the level of a flag but are still not something you'll allow in your online parlor. Speak out against behavior you find reprehensible. And step in and ask folks to behave better when comment threads on your stream get heated.

Whose fault is it if a place is full of assholes? That's right. Uncomfortable but true.

So please, stop bleating about how real names are required to make the web a better place, and go about doing things that will actually make it a better place. Plenty of 'nyms will be happy to join you in those efforts.

Sincerely,
Dana Hunter
Posted by Dana Hunter at 11:30 AM

Sorry but the analogy with facebook does not apply. Real names are important for civility in *public* arguments. On facebook people are not in public, but within a community of friends.

I agree that you don't solve the problem with real names, and that we all share responsibility for making the blog world, and the real world, a better place.
I think we all know of cases where people declare to be who they are not, and we have to face this as a community. Here are some more thoughts on this issue: http://www.interculturaldialogueandeducation.org/2011_05_01_archive.html

Lovely attempt to turn the subtleties of the anonymous vs pseudoynmous vs real-name problem into a black vs white argument of just real-name vs let-things-be.

Yes, there are a million of cases you can find of people being asses online while using their real names. Just as one can always find cases of people who were more seriously injured because they WERE wearing a seatbelt or motorcycle helmet than if they weren't.

Nobody (except perhaps you in your shading of your posting?) has said that requiring people to use their real names is a panacea. (My own opinion is that site owners should also permit pseudonymity if it's a whisterblower, etc.)

However, much as one can find a million cases of people being assess while using their real names or of people who were more seriously injured while wearing a seatbelt or helmet than not wearing one, one can even more easily find a trillion cases the other way round. Seat belts don't prevent ALL injuries. Nor will banning anonymity wipe out ALL trolls, sock puppets, or asses online. It'll just make the caliber of discourse better.

Vin, what's the proposal for dealing with people who have to use pseudonyms for their own safety? Surely a company isn't going to sit there and vet every one.

I will never again sign up for a social networking site with my real name.

Every time I have signed up with my real name on a social networking site, my abuser from childhood finds me. And if you think hearing bad comments from anonymous jerks can ruin your day, imagine seeing a message from the person who made 10 years of life a living hell.

@Vin Not attempting to make it black and white, just address one argument I've been seeing. Sorry that was unclear to you.

@HS One of the strongest reasons for allowing 'nyms, right there. I'm sorry you've had to go through that.

@Future commenters: I won't have time to jump back in, as I'm abandoning all y'all. Have fun discussing!

Hahaha. And I just realized that this is my pseudonym account.

A pseudonym that more people identify me by than my real name (Richard Almaraz), and is a more accurate sample of who I am than my birth name, even though my birth name is also awesome, and useful for other things.

Unto the pure all things are pure.

Andre, there's no free lunch: If a company wants to run comments or a chat board, it can either monitor/moderate or let the caliber of the discussions decay into cacaophony. There's volumes studies that show that. Indeed, http://en.wikipedia.org/wiki/Godwin's_law and books by Sherry Turkle, the MIT psychologist who studies online behavior. The concept that a company which is hosting chats or comments doesn't need to moderate/monitor those just because the discussion is online is a techno-utopian fantasy.

If someone wants to whistleblow or has some other reasonably legitimate reason to post pseudonymously, the procedure is that contact the site's publisher (or the publisher's representatives, those moderators/monitors) who'll give the whistleblower a pseudonym and will agree not to reveal that poster's true identity (except upon receipt of a judge's order to do so).

That method has been used for literally hundreds of years in the newspaper, magazine, and broadcast industries. It's used relatively routinely on newspaper Opinion and Letters to the Editors pages. And there are volumes of case law precedent showing how well it works to promote whistleblowing while protecting the whistleblower's identity. It's also why there are no trolls or sock puppets in print.

@Moe. As for "On facebook people are not in public, but within a community of friends" - I'm sorry, but if prospective employers can "read" my personality traits from the publicly visible info on FB, then FB is absolutely NOT just a community of friends. The moral is to be circumspect on FB, "real name" or otherwise! I've abandoned it.