Step this way, folks, and see John McCain and his Wonderful Missiles!

Arizona's first debate for the Republican primary race had a few memorable moments but none summed up the Republican Party's view on what is "pork" and what they consider their priorities on spending than than this bit by John McCain. Spending for teachers, it's pork, but we need to keep that military industrial complex going and make sure that the people "making those wonderful missiles"... the "job creators", have their taxes cut.
"Wonderful missiles"... I can't believe he said that, but he did. I can't think of a single reason to call missiles "wonderful" unless you think dropping bombs on people's heads is a "wonderful" thing.

I couldn't believe he said that, either.  But he did.  Check out the transcript at the above link.  Then consider that Arizona voters are likely going to choose this supreme asscrunch to represent them for another six years.  In my home state, the wonderful sane people are vastly outnumbered by complete fucktards.

But you know what, Arizona?  It need not be this way.  There are four folks currently in the Democratic primary for US Senate, and any single one of these four would be a saner choice.  Don't like any of 'em?  Wouldn't be caught dead voting for a dirty Dem?  Why, then, write in Camelback Mountain as your senator of choice!  At least the mountain won't run around making a complete arse out of all of you. CAMELBACK MOUNTAIN FOR U.S. SENATE
Of course, the Teabaggers will probably say it's a crypto-Muslim terrorist because it looks like a camel, camels are found in the Middle East, etc. etc., but who the fuck cares what they think?  It's solid, it's held steady and virtually unchanging all these years, it's been an American citizen since Arizona became a state, and I believe these qualities, among many others, make it the obvious conservative choice for any conservatives who still possess a few shreds of sanity.

Really, when you've got a choice between a majestic mountain and John "Fuck Teachers, Fund the Missiles!" McCain, there's really no choice at all. 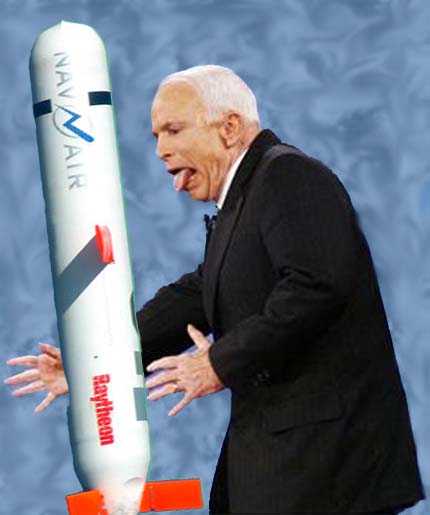