I didn't mean for this installment to be travel-themed.  It's just how we ended up.  There are two odd men out, so I suppose there'll be variety for the sake thereof and all that.  Besides, the travel theme goes well with Silver Fox's meme.  So why the hell not?

And so, without further ado, our final Tomes 2010!

Geology of the North York Moors

You may notice this isn't accompanied by a book cover image.  Best I can do for a link for ye is to direct you to where I filched the picture, which discusses some o' the geology, at least.  This tiny little book is one of those delightful bookstore finds.  My copy is vintage '79, and must have been picked up by vacationing Americans.  It's a quick, simple guide to one of the most interesting national parks in England.  If you can lay your hands upon a copy, do, but be warned: it will make you want to spend an outrageous amount of money to hop a plane for Great Britain.  At least you'll have clear diagrams and succinct but solid text to help you find the best geology available. 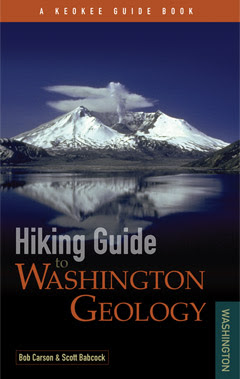 I picked this up at Mount Rainier, and it's been my constant companion since.  It's had horrible things done to its cover from being in the same bag as a hand sample of sandstone, but it's soldiered through.  There are 56 hikes in here.  You'll want to do them all.

It covers eight regions: the Coast Ranges, the Puget Lowland and San Juan Islands, the North Cascades, the South Cascades, the Columbia Basin, the Okanogan Highlands and Rocky Mountains (yes, Washington has Rockies!), the Blue Mountains, and the Four Corners.  No, Washington does not have a Four Corners region in the sense that four states meet in a corner, but it's roughly rectangular, so that last bit covers all four corners.  The hikes are awesome.  Don't quibble.

The trails are clearly described, so well done that even amateurs like me can figure out what they're looking at.  Nearly everything intelligent I ever say about Washington state geology from now on will be on account of this book.  Just so's you know.

This book was written by Ellen Morris Bishop.  That should be all I have to say about that.

What, you want me to sell you on this book?

And did I mention Ellen Morris Bishop?

If you don't know her, go read In Search of Ancient Oregon.  Then you'll know why I say, 'nuff said.

Geology of the North Cascades

This is the perfect blend of information and travel guide.  The first several chapters give an overview of the geology of the region.  This is no simple matter.  The North Cascades are a crazy-quilt of exotic terranes, plutons, oceanic sediments and seafloor, all scrambled and mixed up any-old-how by the vagaries of a subduction zone, then topped off with a bunch of young volcanics.  But after reading the first half of the book, you'll have an excellent idea of which bits are where and why.

Then the second half of the book will take you on a long ramble through them.  There are 154 notes on geologic points of interest.  That means roughly 154 places I want to visit this summer, and I'm not looking forward to trying to whittle them down to a manageable handful!  Plus, there's a recipe for roast chicken.  But it's not just any ol' recipe.  It's one you can make and bake right in the Great Fill.  Yes, you will be burying chicken in old debris flows and baking it right inside the geology.  Is that not teh awesome?  Yes.  Yes, it is.  And no other book I've ever seen on geology has ever offered anything like it.

Japanese Homes and Their Surroundings

You may think that a book on Japanese architecture from 1885 would be dead boring.  In this book's case, you would be wrong.

Not only is it richly illustrated with a great many beautiful engravings, not only is the prose clear and the descriptions of even the most fiddly bits of architecture and house construction concise and easy to follow, not only does it range from design to construction to decor, it takes many hysterically funny side trips.  Mr. Morse, you see, had a rather jaundiced view of American habits, and he wasn't afraid to spend several pages bashing them.  He had a caustic wit.  He had a keen sense of timing and effect, and understood that sometimes a diatribe requires detail, and sometimes the detail is best left to the readers' imaginations.

Two examples will suffice.  Here, on page 172, he compares Japan's carpenters to America's:


It is a remarkable fact, and one well worth calling attention to, that in the smaller towns and villages, in regions far apart, there seems to be artistic workmen capable of designing and executing these graceful and artistic carvings, - for such they certainly are....  I do not mean to imply by this general statement that good workmen in Japan are not drawn to larger cities for employment, but rather that the smaller towns and villages everywhere are not destitute of such a class, and that the distribution of such artisans is far more wide and general than with us.  And how different such conditions are with us may be seen in the fact that there are hundreds of towns and thousands of villages in our country where the carpenter is just capable of making a shelter from the weather; and if he attempts to beautify it - but we will not awaken the recollection of those startling horrors of petticoat scallops fringing the eaves and every opening, and rendered, if possible, more hideous by the painter.

That, my darlings, puts me in mind of Jerome K. Jerome's remarkable ability to say ten thousand things with just a few choice words.


If a foreigner is not satisfied with the severe simplicity, and what might at first strike him as a meagreness, in the appointments of a Japanese house, and is nevertheless a man of taste, he is compelled to admit that its paucity of furniture and carpets spares one the misery of certain painful feelings that incongruities always produce.  He recalls with satisfaction certain works on household art, in which it is maintained that a table carved with cherubs beneath, against whose absurd contours one knocks his legs, is an abomination; and that carpets which have depicted upon them winged angels, lions, or tigers, - or, worse still, a simpering and reddened maiden being made love to by an equally ruddy shepherd, - are hardly the proper surfaces to tread upon with comfort, though one may take a certain grim delight in wiping his soiled boots upon them.  In the Japanese house the traveller is at least not exasperated with such a medley of dreadful things; he is certainly spared the pains the "civilized" styles of appointing and furnishing often produce.  Mr. Lowell truthfully remarks on "the waste and aimlessness of our American luxury, which is an abject enslavement to tawdry upholstery."
We are digressing, however.

Such digressions season the book throughout, and have turned it from mere tome on foreign architecture into a delightful exploration of different cultural worlds.  There's a good reason why this book is still in print and available 135 years after its birth.  I've spent nearly a year reading this book, dipping in to it a few pages at a time, savoring it for as long as I can, because I'm sure I'll never read another book on architecture this good ever again.

Miyamoto Musashi: His Life and Writings

I've read translations of the Book of Five Rings (Gorin no sho), seen programs on Miyamoto Musashi, and read the works of other martial artists, but this is the first time I've read a translation of Musashi's work and a history of his life by an actual martial artist.  Kenji Tokitsu does a wonderful job rendering Musashi as a human being, which is difficult, considering the man is a bloody legend.

And, for the first time, I've read a translation of the Gorin no sho that actually made sense.  That's no mean feat!  Musashi wasn't writing for novices, he was writing for people he'd already taught.  Most translators render the words without meaning.  Kenjii renders not only the words, but the concepts behind them, in a beautifully clear translation with extensive notes.  And he leads up to that translation by exploring Musashi's life, his development as a martial artist, and the Japan he lived in.

This book also includes some of Musashi's lesser-known works, which helps complete the picture.  And, speaking of pictures, there are beautiful color plates of Musashi's art work - he wasn't just a martial artist, but a supremely gifted painter and calligrapher.

Musashi's legendary status is well-deserved.  This book honors that, but also shows him as what he was: a human being.  And it's written by a man who knows his stuff: how to translate, how to write, and how to think and act like a martial artist.  It's rare to get hold of a book in English that combines all three.  This is one, and I'm very grateful he wrote it.

Most translators render the words without meaning. Kenjii renders not only the words, but the concepts behind them, in a beautifully clear translation with extensive notes.

That's a problem with any technical translation. You have to understand the subject matter, as well as the language. In any given subject area, that's going to be a small subset of all the people who know the subject or the language. Even rarer, I suspect, is someone with the desire to make the subject understandable.

I think that book counts as a technical book. It's about a subject that most people don't know much about.

In all the years I've lived here, I've never visited the San Juans. I need to correct that oversight soon.

Let me suggest a book on Eastern Oregon, Oregons Dry Side by Alan D. St.John. Its a nice tour guide of the area east of the Cascades, including areas like Albert Rim one of the higher fault scarps in the US, as well as the whole Steens Mountain and other areas.