The Bee's Knees and Other Stories

My relationship with insects has fundamentally changed since I acquired a camera with excellent macro abilities. Creepy-crawlies just creeped me out. I had an intellectual understanding that critters had important functions in food chains and other sorts o' things, but as for admiring them... yeah, not so much.

There was a time when I'd look on a crane fly with disgust rather than pleasure. But then I bought this camera, and turned it on an insect because it was a convenient thing to test the macro function on, and suddenly, the unregarded arthropods and suchlike were revealed as gorgeous lifeforms deserving of admiration. 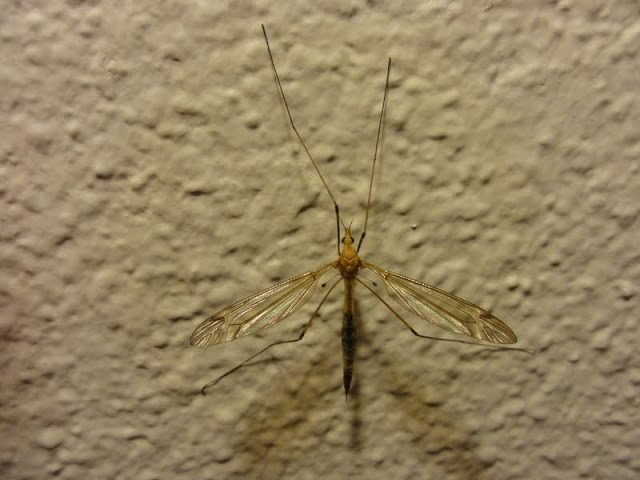 There's your common crane fly. It came to live with us briefly this summer, flying in through the door my cat insists stay open. It landed on the wall above the stove, and sat there with its transparent wings all iridescent in the light. Yes, it's a turf pest, and lawn owners everywhere probably aren't fond of them. But they cause no harm to humans (other than messing up their pristine lawns) and they're actually quite lovely.

Even lowly flies become rather more attractive prospects when you've got the proper camera and they've chosen the right background: 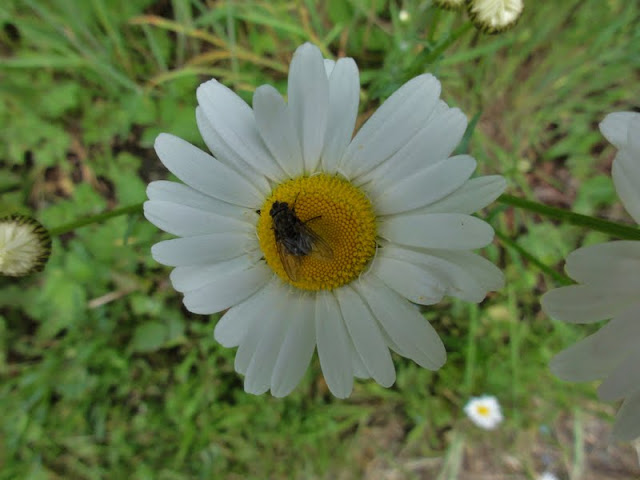 I've caught myself looking at them closely, admiring their little bodies with their various colors and their odd hairs. I look into their eyes and marvel at the compound complexities. Mind you, I whip out the Windex of Doom when too many of them sneak into the house and take up positions on my bathroom mirror, but I don't mind one or two zipping about the place. I'd better not. My cat doesn't understand the concept of closing the door, and insects don't understand the concept of indoors mine-outside yours.

According to Savage Chickens, there's an excellent way to deal with both arachnophobia and spiders in the house. I'll have to try it. Not arachnophobic, anymore, but it would still be nice if the poor little beggars wouldn't come in here just to starve to death, or meet my Great Northern Tissue of Doom if they insist on living somewhere like my bed.

Before I got this camera, I would've watched from a vaguely interested distance whilst the millipede I'd disturbed dug its way back into the ground. As the lighting conditions were teh suck, I decided to place this one on a more contrasty background before letting it go its merry way: 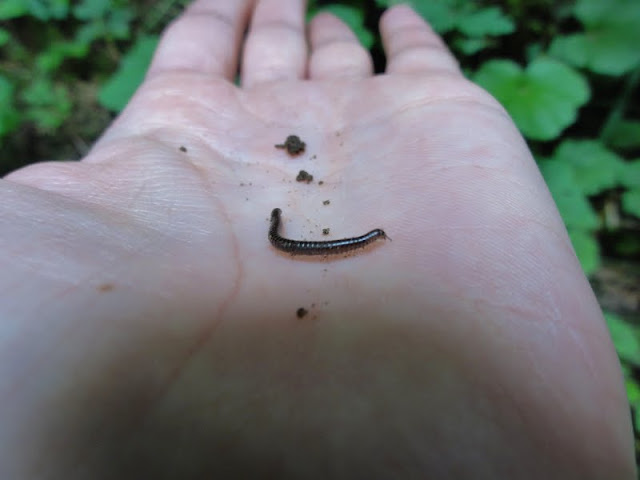 It started out curled up, but quickly uncurled and got to exploring, with tiny little feet tickling my palm. And it didn't feel creepy or gross - it felt adorable. I let it walk off my hand and find its happy place again. For a moment, there, I forgot all about the soil I was investigating, and just enjoyed an unexpected encounter with one of the denizens of said soil.

But what's really changed is my relationship with bees.

I used to be terrified of bees (despite not having an allergy that would justify said terror). I used to flee from every bee, certain the little bastards wanted nothing more than to sting me. Then I got this camera. Suddenly, my fear of bees completely vanished. I adore them now. If they're occupied with noms, I can get up quite close, and they don't mind me a bit. They're not out to get me, they're just making a living. As long as I don't trap them or threaten their hive, they seem perfectly content to let me snap away while they get on with the living. But I shall put my beautiful bees below the fold, because I know some of you aren't so admiring, and often for good reason.

Here is a rather preoccupied bee from Madrona Park: 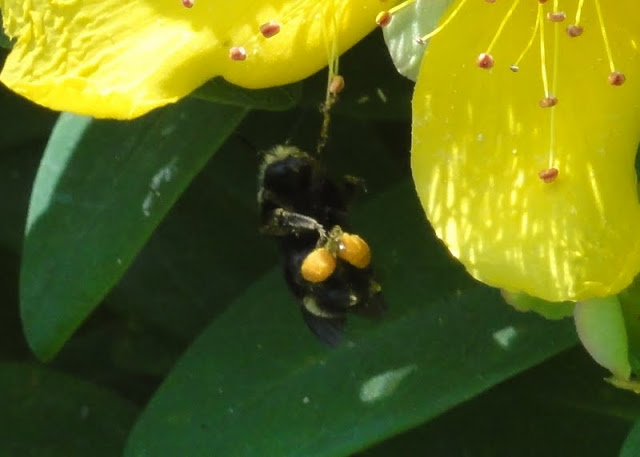 Look at all the pollen on her little legs! I believe those are pollen baskets, which I didn't even know about until just now, when I went to discover whether I should refer to this beauty as he or she. Clearly, I have got a lot to learn about bees.

But how bloody adorable is that? She's just hanging there, arranging her pollen, gathering more, busy as a - well, y'know, bee.

We saw some utterly lovely bees up on Cougar Mountain. The thistles are in bloom, covered in pollen, and a few enterprising bees were out getting covered in the stuff. 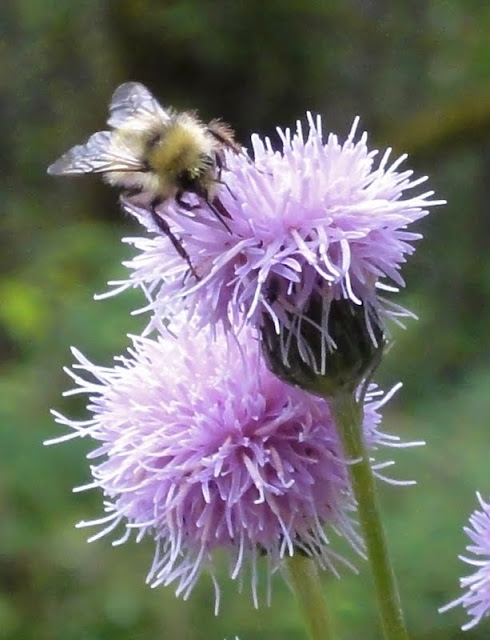 There are several nice things about thistles. They're tall, which means one doesn't have to bend down for a shot. They're rich sources of prime bee food, which means the bees tend to stick with one flower long enough for a third-rate camera jockey such as myself to get her shit together for a decent shot. And they're purple. I like purple. I like how the purple makes such a lovely contrast to the nice tawny golds and velvet blacks of the bees.

This little fellow spent so much time on this thistle, and was so intent on it, that I was able to get in quite close and get some great photo-ops. 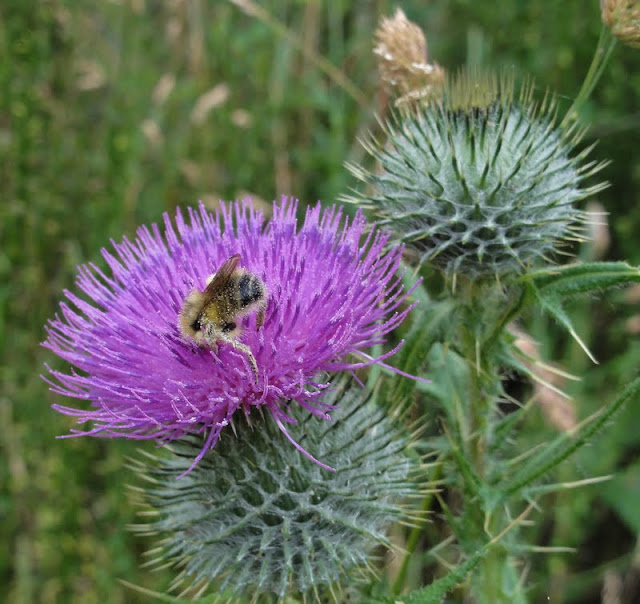 She'd get her head right down in there, her little pollen-coated tush sticking out in the air, and dig deep for the good stuff. Then she'd bounce back up and choose another bit. 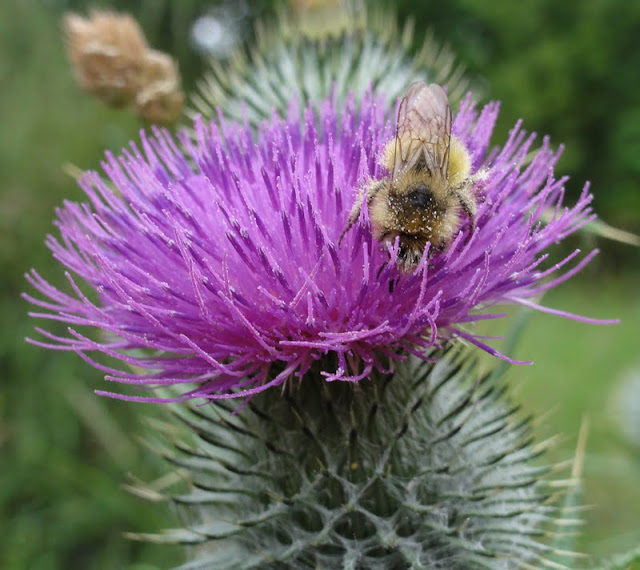 I love that shot, because it shows off her wings so well. Bees are incredible little fliers. Two hundred and thirty flaps per second, people. Those tiny little gossamer wings are lifting and propelling a fairly large body. It's hard to believe something so short and desperately thin can propel those plump little bodies through the air so efficiently, but they manage it beautifully. 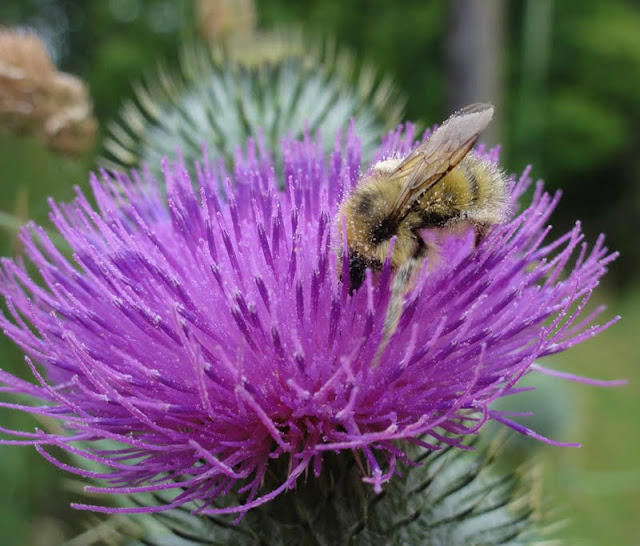 There's a nice shot, contrasting the sleek and shiny wings with the fuzzy body. They're so furry! That fur makes an excellent trap for pollen, and the thistles seem to have evolved to take as much advantage as the bees do, because every petal is dusted in pollen. 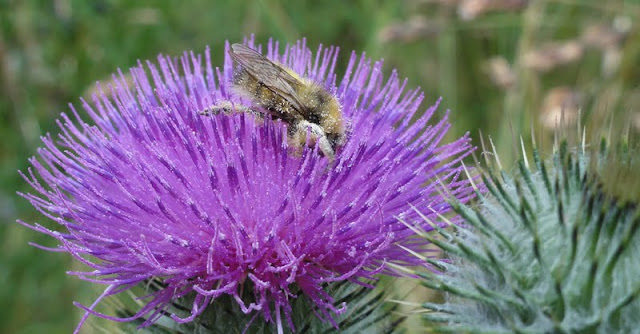 She's practically swimming in those petals, diving down, paddling round. She was fascinating to watch.

My relationship with wee little living things is certainly different now. There's a beauty in these tiny, so often unregarded animals that overcomes the ick factor. Mind you, I haven't quite reached the level of comfort wherein I can associate with wasps or allow a bee to wander on me rather than the nearby flora. And I do try not to get in their way whilst I'm setting after them with ye olde camera. There are boundaries. But I find them remarkable, now, rather than bothersome, and when I stop to smell the roses, I've always got an eye out for an interesting insect that may be nearby.
Posted by Dana Hunter at 12:08 AM

Dana, I've been reading your blog for months now, and this is one post I must congratulate. With your permission, I'd like to use one or two of your photos as the basis of a painting or two.

WOW!! what gorgeous pictures. They are truly pieces of art.

Now I'm wondering what type of camera you have so I can look into getting one for myself? I would love to be able to take shots like that with all that detail.