I'm from dry country. Put it like this: when we say "Grand Falls," we mean a waterfall that doesn't flow year-round, and when it does, it's more like a very runny mud than actual water. When we say "river," we're often talking about something you can walk across dry-shod 352 days out of 365. Some desperate folk try kayaking in flash floods (not recommended), because otherwise, a kayaking adventure consists of picking the thing up and walking it down a bone-dry bed whilst closing one's eyes, making paddling motions, and imagining you're actually at risk of getting wet.

That, mind you, is in years with above-average rainfall.

How dry is it? Yuma once went two years without a single measurable drop of rain. We didn't find it worth remarking until late in the second year.

I'm still making the adjustment to wet country. Four years on, there are still times, in late spring when all the foliage has completely leafed out, that I feel I am being menaced by all that looming green stuff. Perennial creeks aren't yet a "yeah, so?" experience. I've finally reached the point where I can grumble about too many cloudy days rather than finding them a refreshing novelty, but when I head up into the Cascades, the merest trickle of water down a cliff still causes me to shriek "ZOMG look - waterfall!!" as if that's something rare and precious. I do a lot of shrieking in the Cascades. There are a lot of waterfalls.

Such as this one: 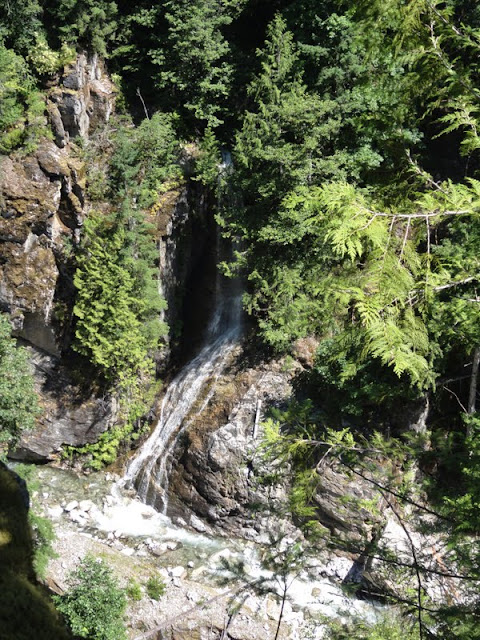 That, I believe, is Gorge Creek Falls. So the sign said, anyway. We all know how far we can trust informative signs, especially after that thing with knots last time. It's a waterfall right by the Gorge Dam, which wasn't quite visible due to too much water. We've had a wet year, my friends, even for wet country.

Due to constant water, the biology gets a bit enthusiastic this side of the Cascades. And that's because of the Cascades: you know that rain shadow thing? Well, put it like this: we are not in the rain shadow of the Cascades. No, what happens is that the lovely moist marine air that's managed to survive the Olympics looks east and goes, "You know what, I think I'll go to Wenatchee. I hear Wenatchee's nice this time of year," and the Cascades are all like

and the next thing you know, it's raining in Seattle. Again. And the plants are like

But just occasionally, you can find spots where the rocks have managed to avoid acquiring a thick coating of plant life, and you can see your geology up close and personal. Geologists are awesome. They're about the only set of people who can find fault in something and go, "Awesome! A fault!" 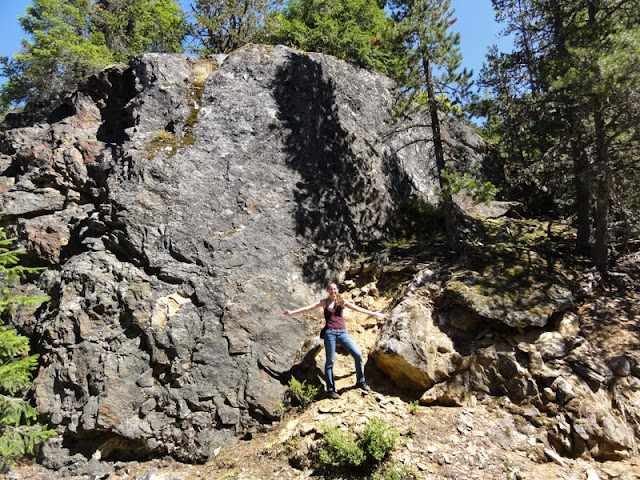 I'm pretty sure this is one, but I'll be requesting second opinions in a later post. It's not like I've got a lot of experience finding faults in anything aside from creationist arguments and my own stories.

The Skagit River has a lot of dams on it. Seattle City Light uses the river to ensure that we do, in fact, have light. Ross Dam is one that you can actually go play round on, and it's pretty dramatic. 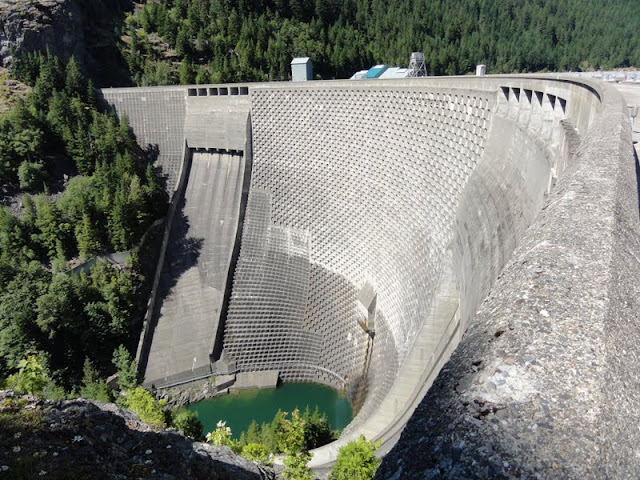 It's got that weird waffle-iron pattern because they'd intended to build it higher (which meant it would have also had to be thicker, if I understand my dam construction correctly), but due to folks deciding that we had enough flooded waterways already, thanks, it never got expanded. Still, 540 feet ain't shabby.

One of the weirder sights on the way to the dam is a tugboat. Now, you might be thinking, "Well, Dana, there's a big ol' lake that goes all the way up to Canada there - what's so weird about a tugboat? Lots of boats on a big ol' lake, no reason there can't be a tugboat."

Well, yeah, except the tugboat isn't exactly in the lake. 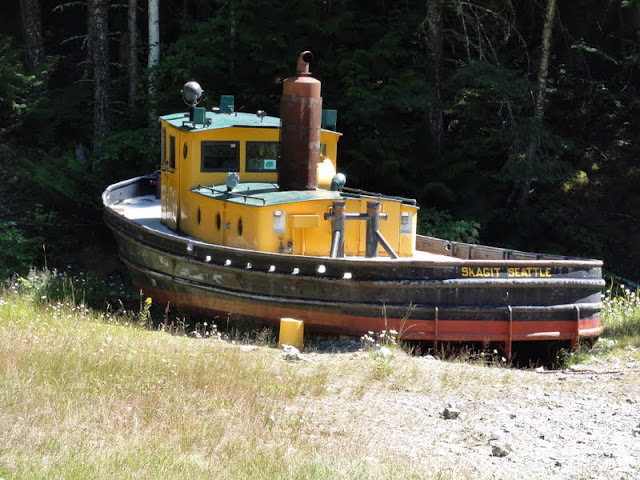 It's just sitting there in a clearing in the woods by the side of the road, far from the marina. No idea how it got there, or what its story is. Weird and unexpected and totally fun.

So, I think I've mentioned the hike back up is all up. It's a pretty steep climb, and it's hot when the sun's out. This is probably one of the only places in western Washington that boasts actual dry dirt. I mean, it's a trail with actual dust on it. Dry dirt is something of a novelty item round here, and this former Arizonan was so delighted by it she nearly took her shoes off so she could wiggle her toeses in something resembling home. But the climb back up reminded me why I'd been happy to leave hot, dusty trails behind lo those many years ago: namely, because they're hot and dusty. Happily, there's Happy Creek to look forward to. Remember how I said you can't spit in the Cascades without hitting a waterfall? Huzzah for that! 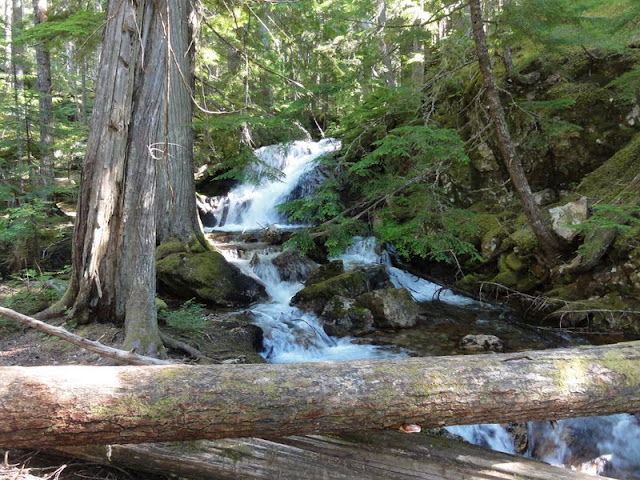 We had a long, happy sit-down by Happy Creek. The water's so cold you can put your bottle of liquid refreshment in it (be careful to wedge it in the rocks or it will happily go sailing down the creek to go live in the lake), and a few minutes later, voila - you have an ice-cold drink. This is a magnificent thing for hot, dusty, normally-sedentary hikers. 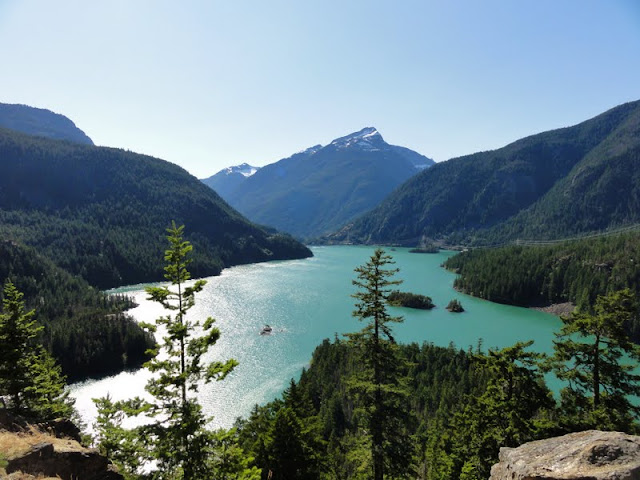 Is that spectacular or what? I mean, cloudless skies on the west side of the Cascades. Oh, and the lake and the mountains are pretty spiffy, too.

There is this itty bitty island in Diablo Lake that's pretending really hard it's a desert island in the Caribbean. Even the trees are in on the fantasy. 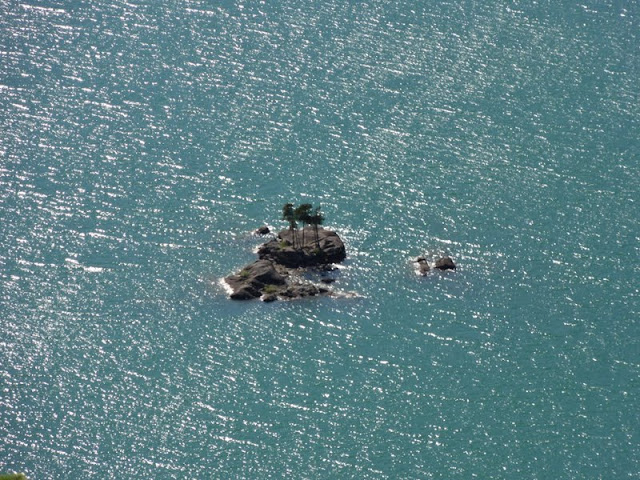 I'll bet it gets rudely jolted back to reality every time it snows, but you've got to admire it for trying.

And there's another thing there that will make geologists go squee, but I'm going to make you wait for it. I'm a cruel, evil cantinera, I know. But I'm not completely evil. I'm going to take you down to the limestone quarry now and show you a little something outstanding. 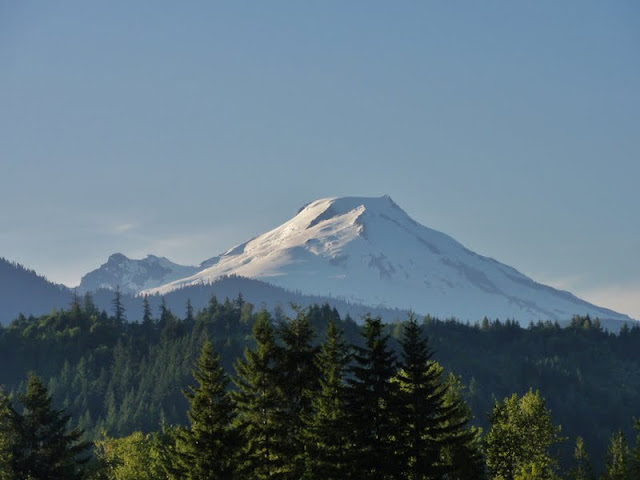 Oh, yes. The views of Mount Baker are that good.

Quite the eventful day, that. We didn't get back to civilization until after nine, and we hauled our sweaty, dirty, exhausted selves into Carino's, which kicks the Olive Garden's ass. The service, the food, the decor, the fact they didn't care a fig how icky we looked, all of it combined for a fantabulous meal, and by that time, we surely needed one. And they have mini-desserts. This is bloody genius. I mean, by the time you load up on all that pasta, you don't want a whole huge slice of something, you feel like even one wafer-thin mint will have you splattering innards all over the restaurant a la Monte Python, but this adorable, tiny little dessert in a baby dish - now, that you can just about manage. I had the mini-turtle cheesecake. People, I could rhapsodize about the caramel and the chocolate and the cream all swirling together on the palette like a spoonful of utopia, but I'll spare you that. Just bloody well go there and eat when you're in the area, m'kay?

Then get a good night's sleep, because we're headed to the islands, mon.
Posted by Dana Hunter at 12:25 AM

oh sure, tease me with a more to come