River Walking Parte the Fourth: Rubbernecking at a Continental Trainwreck

The word of the day, my darlings, is granite. The Skykomish River seems to be inordinately fond of granite. It's hauled down enormous chunks of it, probably plucking them from the Index Batholith, and scattered them all over its banks after a desultory bit of rounding. Walk its Cascade banks, and you're in a gray area. It's gray because it's granite. 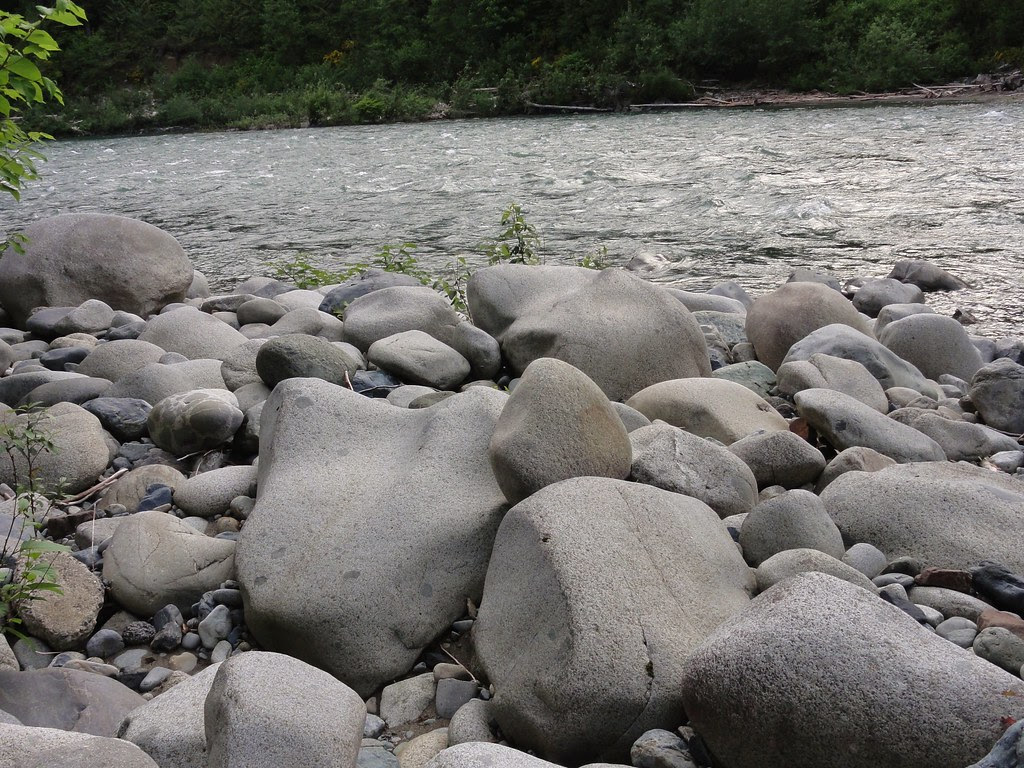 Well, granitic, anyway. Grandiorite, most likely. Maybe some tonalite, too. Look, they're granitic, and they're from plutons and batholiths, and that's what really matters.

They are large. The river isn't messing about, here: it's swift and strong and likes boulders. It also likes variety. Scattered amidst the granitic rocks are boulders and chunks of some truly delightful stuff. And what it's all got to say is this: you are rubbernecking at a continental trainwreck. An island continent collided with the North American continent about fifty million years ago, and the lives of these rocks changed dramatically.

Slow down, take a long look at the beautiful carnage - this is one time when you don't have to feel guilty for gawking at an accident scene. 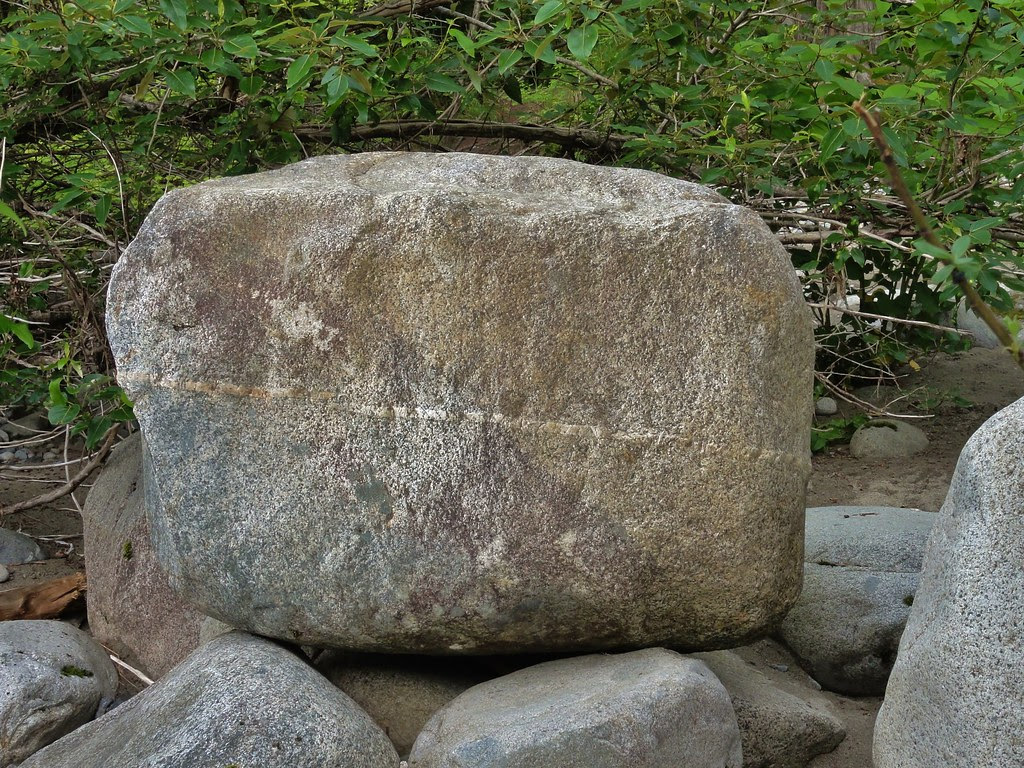 Here we have a boulder of a granite-like substance. What is this rock telling us? Well, it's letting me know I don't know jack diddly about why it's got those lovely mauve and blue colors in the left bits, or what that white streak is (probably pegmatite or quartz, but I didn't walk over for a closer look - too many other goodies demanding my attention). But the main thing it's saying is that things went crunch. The North Cascades are full of these plutons and batholiths, which formed when the North Cascades subcontinent ran in to North America. Subduction zones munched seafloor on both sides of the island, things heated up, and crustal rocks formed these lovely granitic melts over tens of millions of years. The Index batholith is about 35 million years old, just a youngster. Those melts welded the interloper on to North America.

When continents collide, and subduction zones subduct, you end up with far more fascinating stuff than granite. 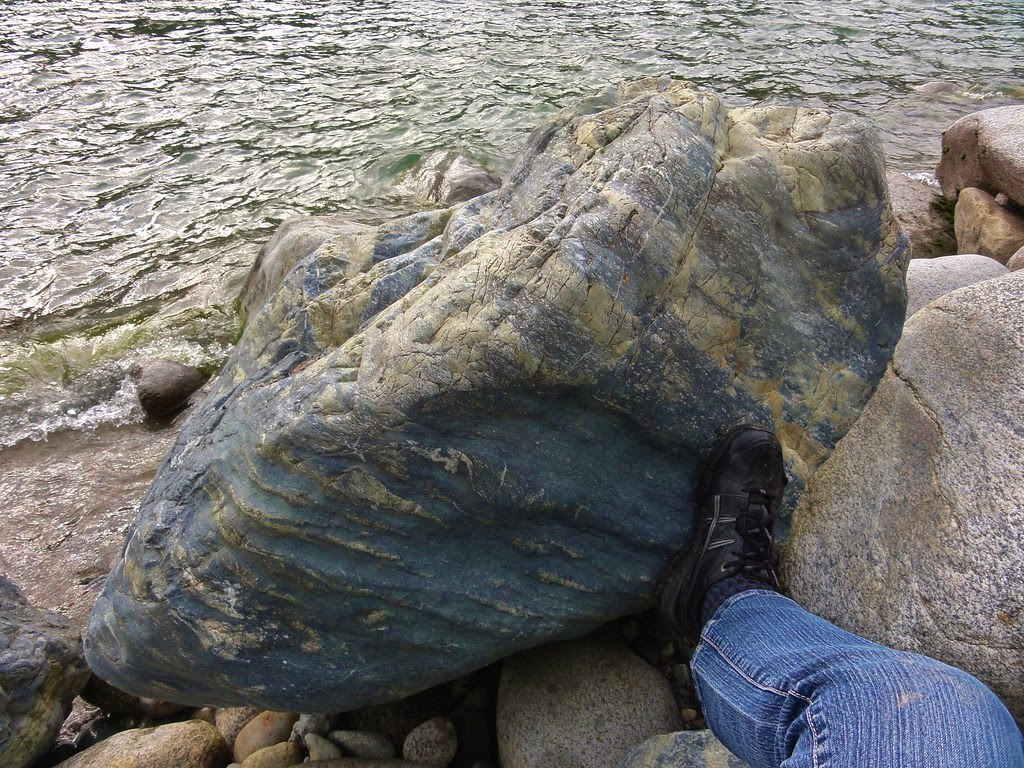 I have no idea what this is. It's metamorphic, that much I'm sure of. Enormous chunks of metamorphic rock end up here on the riverbanks. Even the granite doesn't always seem to have escaped a good squishing. 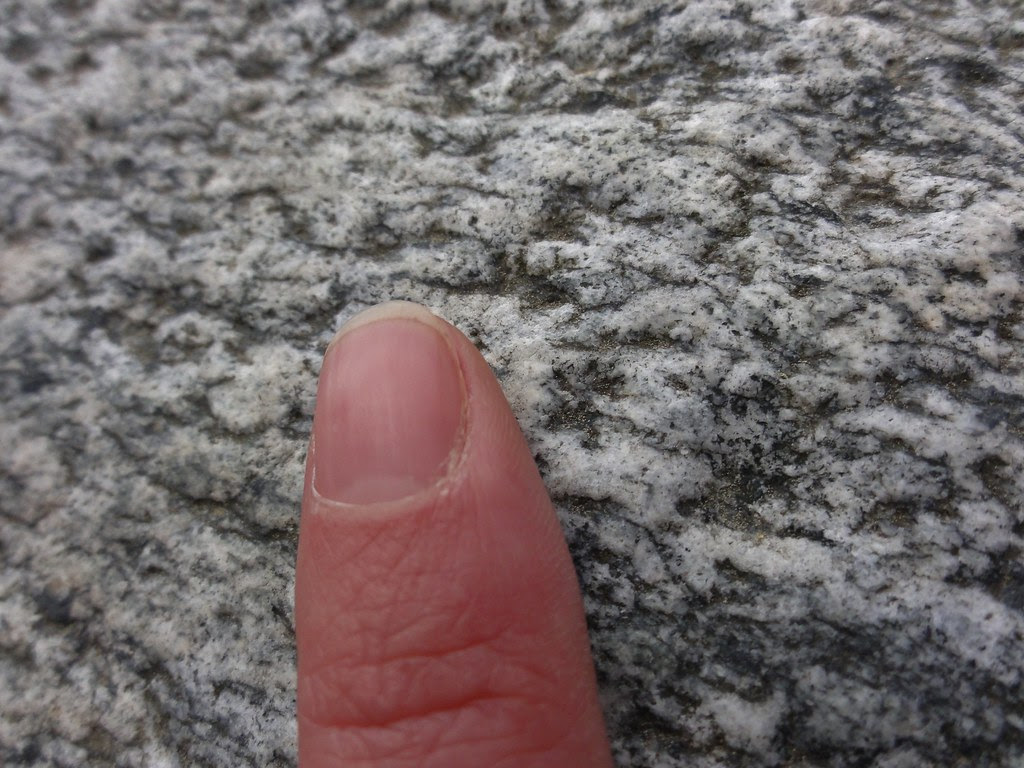 This boulder fascinated me: 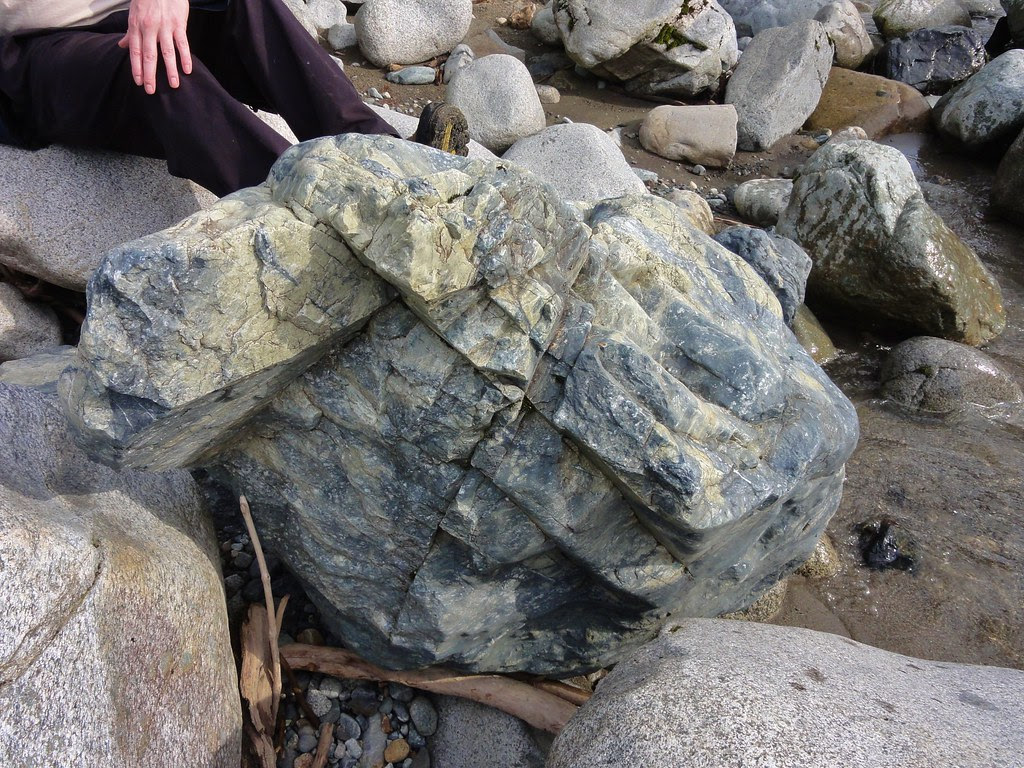 I'm not sure what it is, alas - getting better at identifying random chunks of rock, but a lot of stuff on the banks defeated me. But the shapes, the colors, the textures, of this boulder were mesmerizing. Hopefully, one of my geotweeps will know what we're looking at. 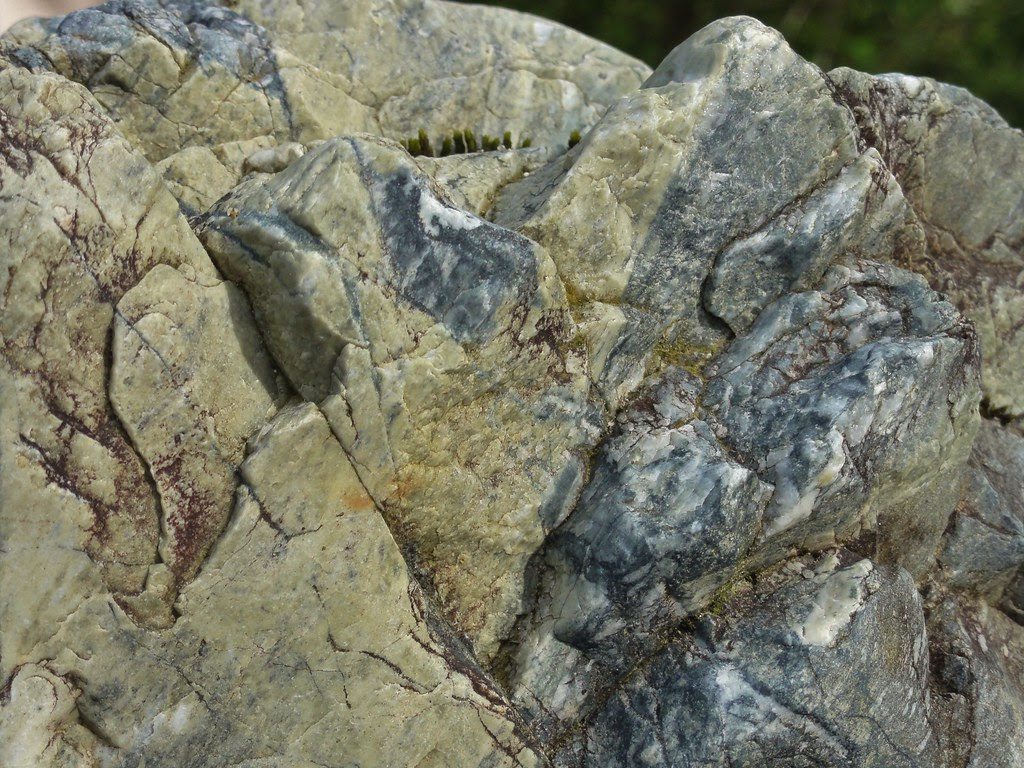 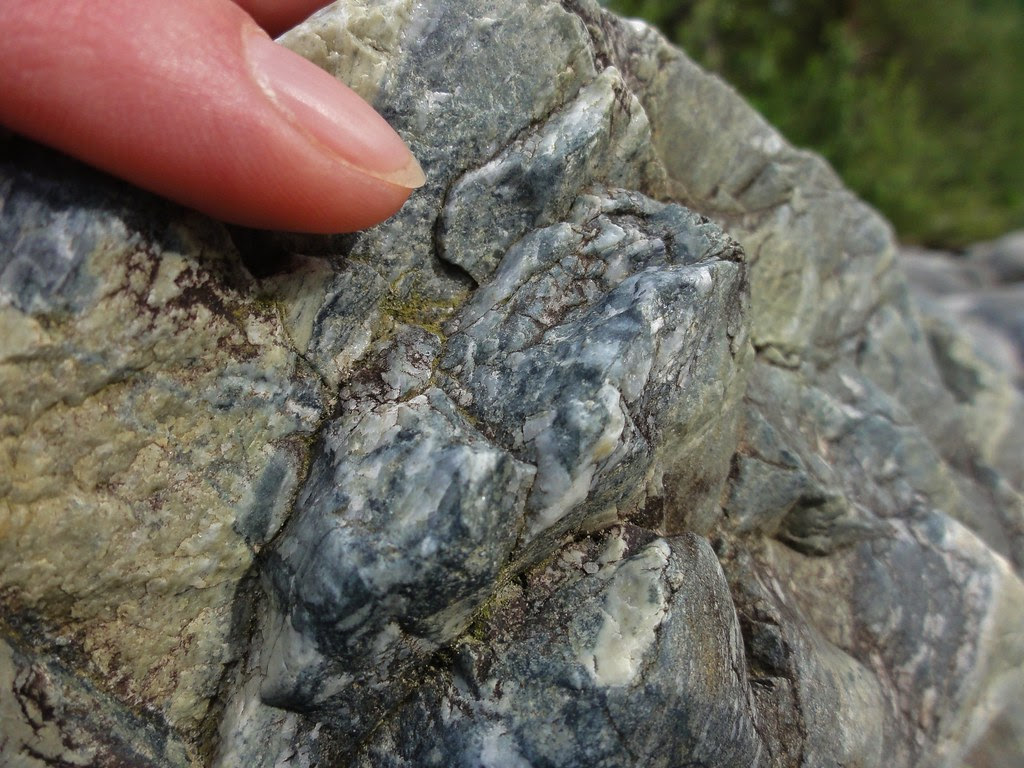 The rocks here make me appreciate the early geologists all the more. Staring round in perplexity at such a variety of amazing stones, not knowing what many of them are, trying to make sense of it all and sometimes throwing my hands up in defeat, puts me in touch with the folks who started the field. And they didn't even have geologic maps and plate tectonic theory to work with. They just had curiosity and intelligence and a gift for puzzling things out. 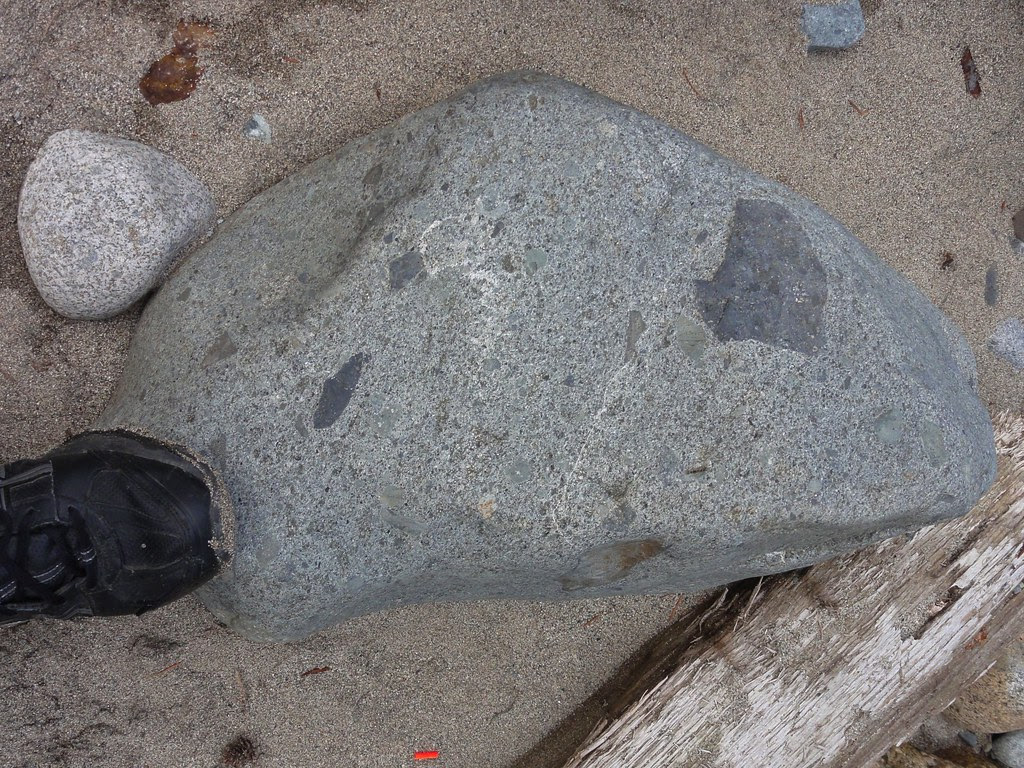 It can be desperately hard to tell, especially for a rank amateur, what a rock is when it's ripped from its context. 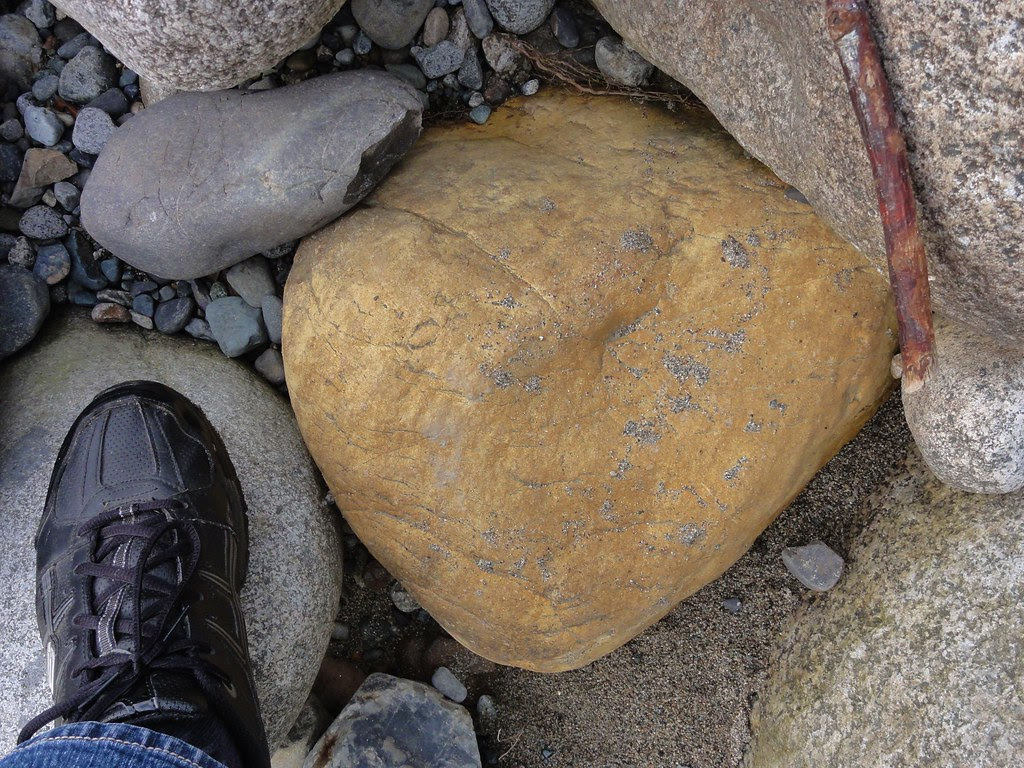 There were a few of these, and they pop in those mostly-gray surroundings. They didn't seem grainy enough for sandstone, but perhaps a metamorphosed variety thereof? Something else completely? Dunno. Someday, I'll find out, and you just watch me end up writing an ode to them. I get that way about rocks. They make me all misty-eyed.

Here's another fascinating boulder I'm at a loss to identify: 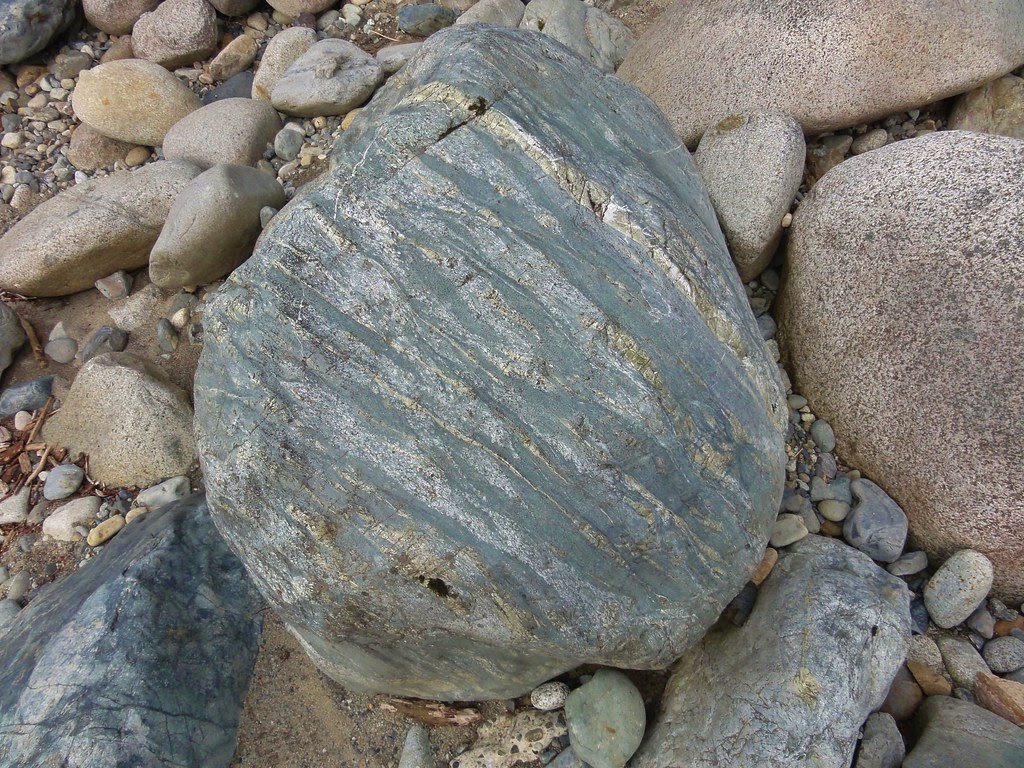 It's whispering a few things to me. It's talking about heat, and pressure, and strain. You can tell from the way it's streaked and by its hardness. Hard times make for hard rocks.

A couple of close views, in which its character is revealed: 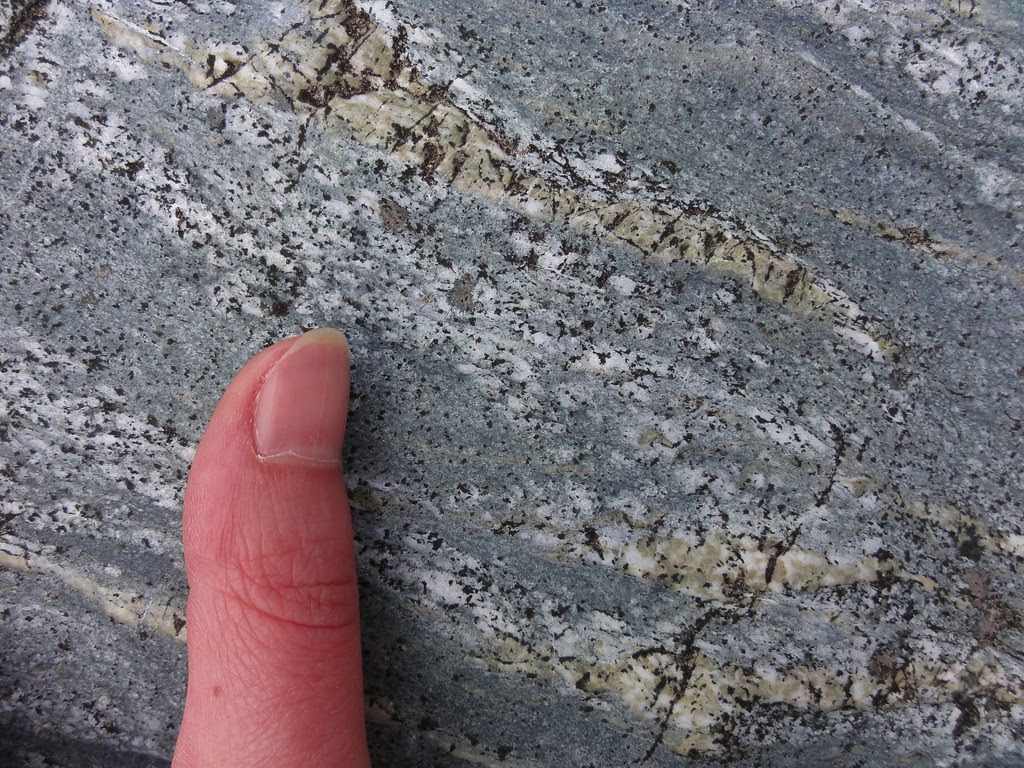 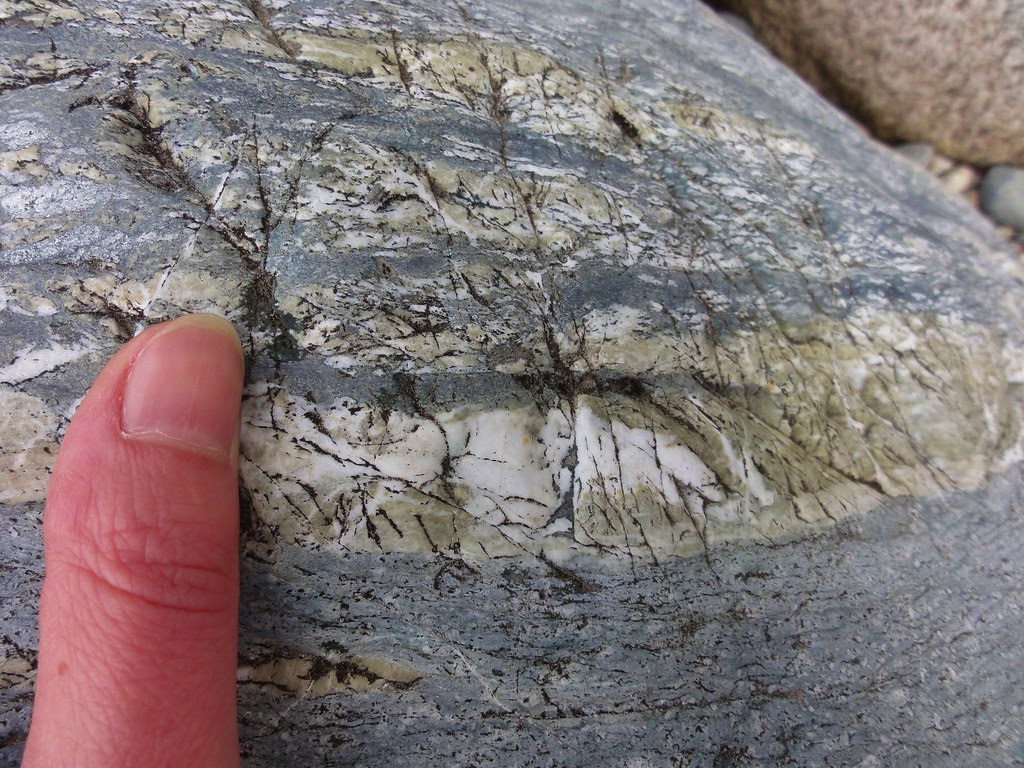 And by now you're thinking, "Geez, Dana, you went a little wild on the saturation, there. Turned your thumb red." That's not the photo editor - I'd been washing rocks in the river. That river is fed by snowmelt, people, and it is fuh-reezing. In fact, when I was editing these, I kept trying for a flesh-colored thumb and wondering why the rocks were all washed out and dull until I remembered how red my hands were!

Here's another bit of unnamed yum: 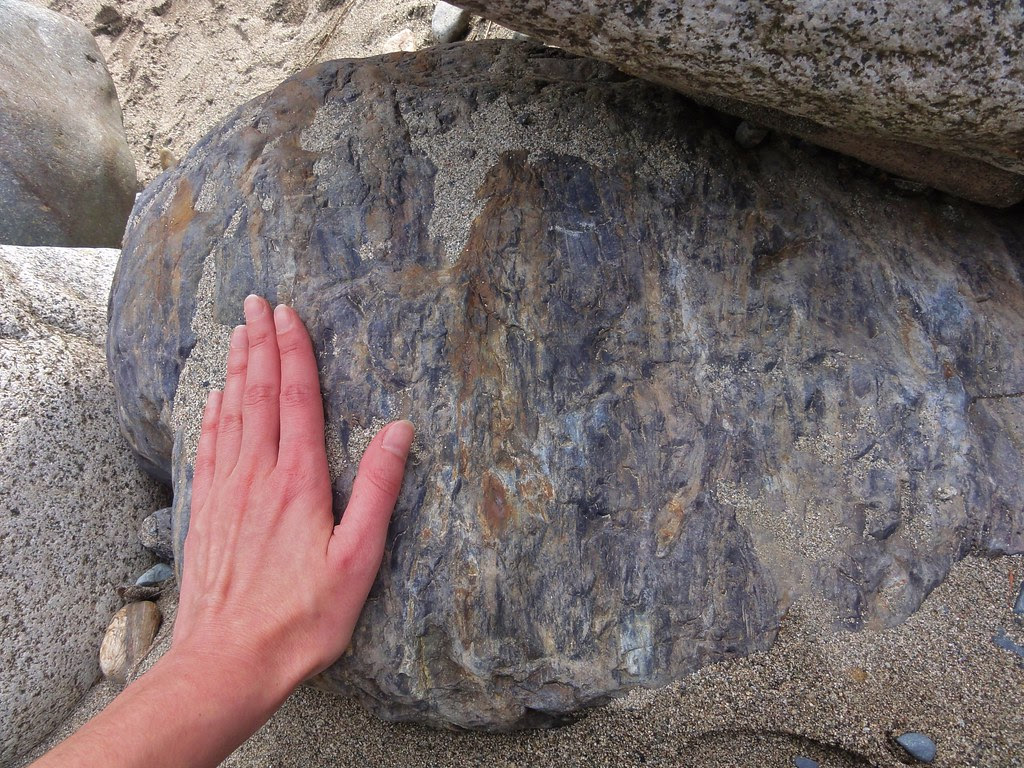 And by now it becomes clear I've got a hell of a lot to learn about rock and roll - I haven't the foggiest what this is, why there are these rich brown stripes in it, and the actual mechanics of a river plucking it up and rolling it along until something that's super-hard becomes rounded.

We haven't been properly introduced, but I can't help getting close. 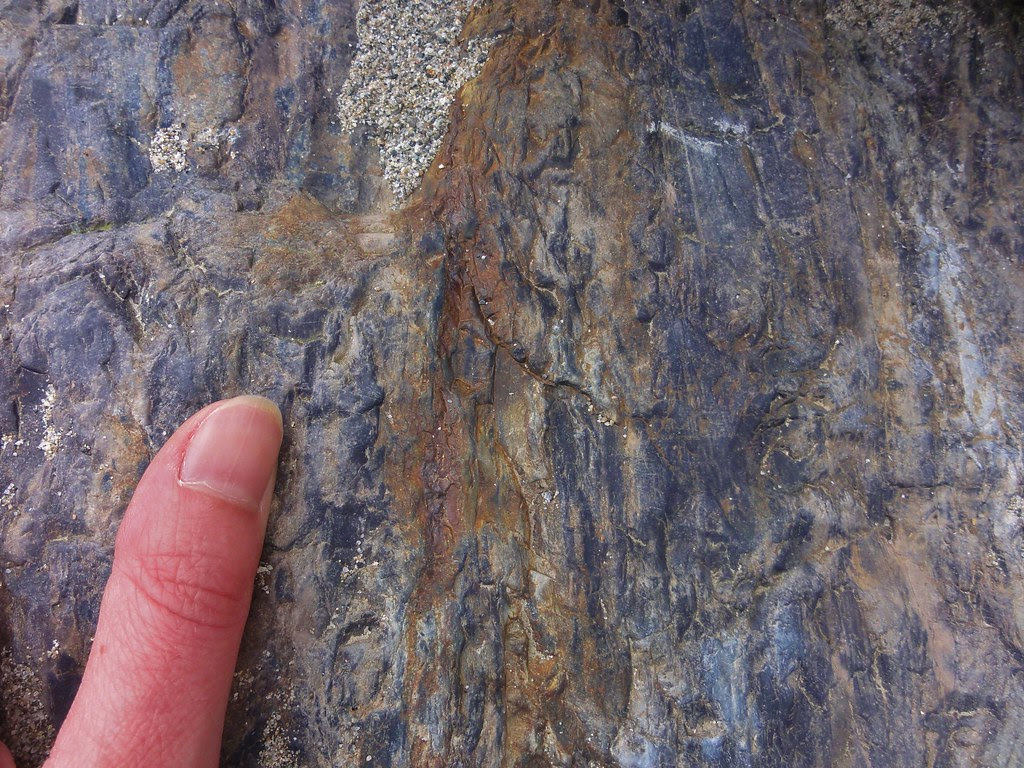 This one was delightfully smooth, polished to a turn by its tumble in the river. I wanted to hold it and squeeze it and pet it and love it, and call it georgite.

Here's one that's kind of blah from a distance, but mesmerizing in macro. 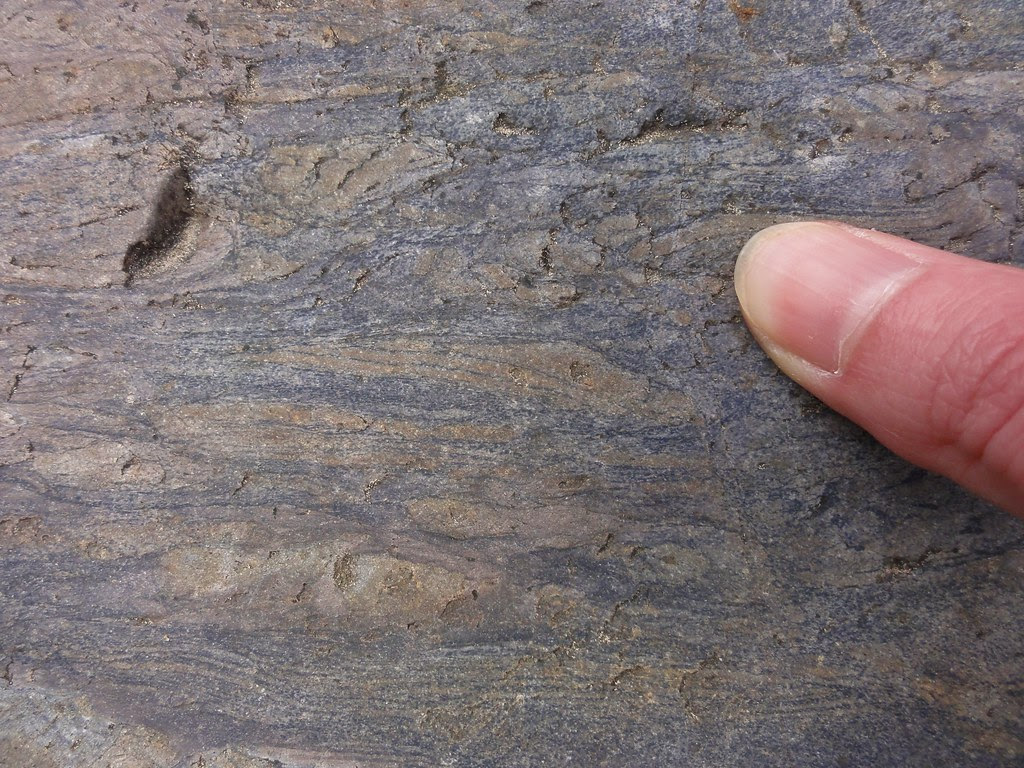 I love textures like this, rocks that almost look like wood, with a wonderful grain. I wish I knew what it once was. Perhaps it's one of those lightly-metamorphosed seafloor sediments that got stuffed into the trench. Some of the rocks round here were treated gently enough in their trip down the subduction zone and back up in the orogeny that fossils are still identifiable in them.

Here we have some suspected serpentinite. 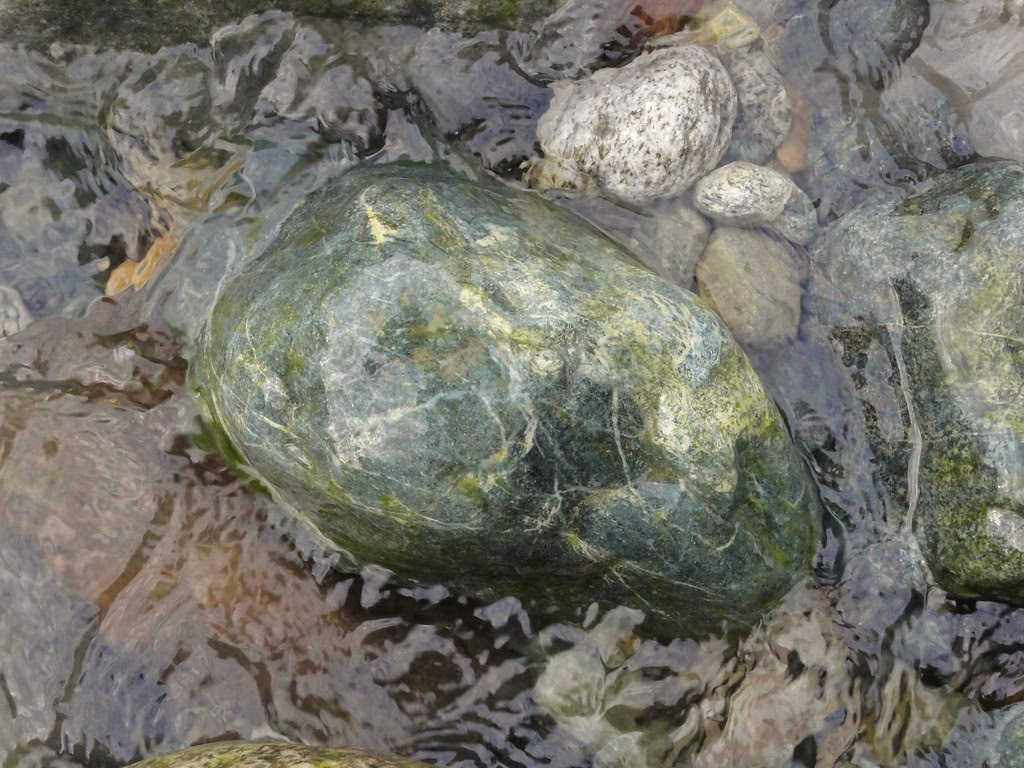 The river brought out its colors wonderfully. And yes, I know, there should be something for scale, but what I had were my feet and my hands, both sets of which looked at that icy cold water and went, "No fucking way." As I recall, it was one of the smaller samples, a little bigger than my hand.

Along the river bank with its mostly rounded rocks, right by that eye-popping bit of suspected serpentinite, an outlier caught my eye. 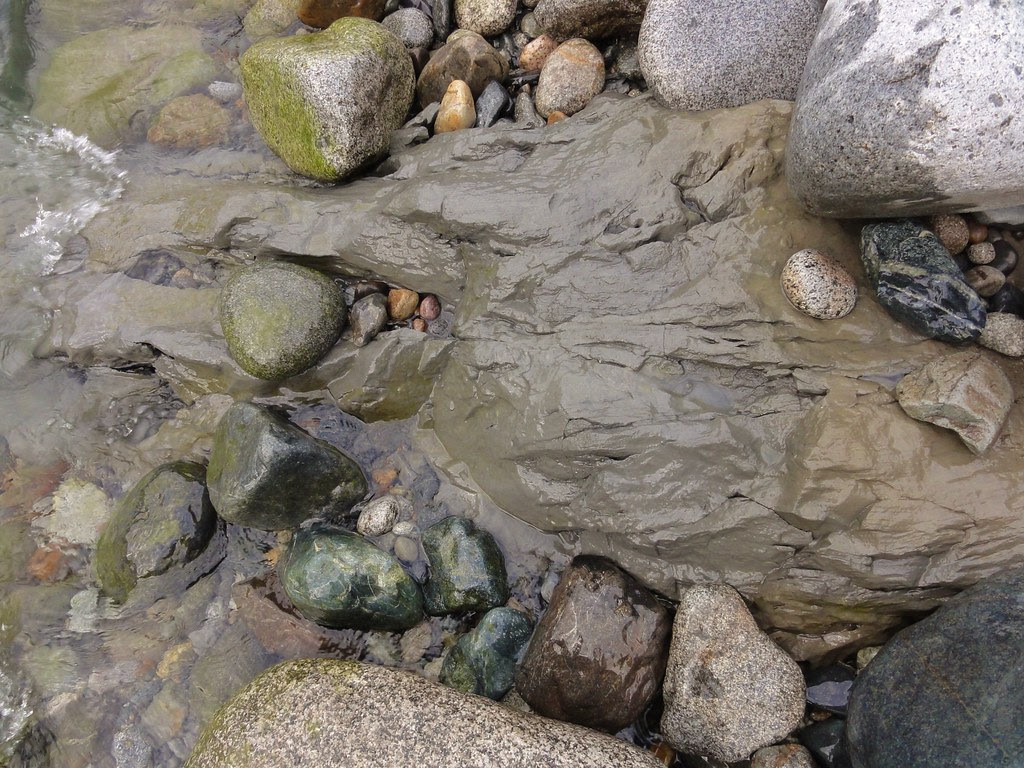 What was it? Part of the river bed? How had it managed not to get worn down? I ventured onto a nearby boulder and crouched for a close inspection. 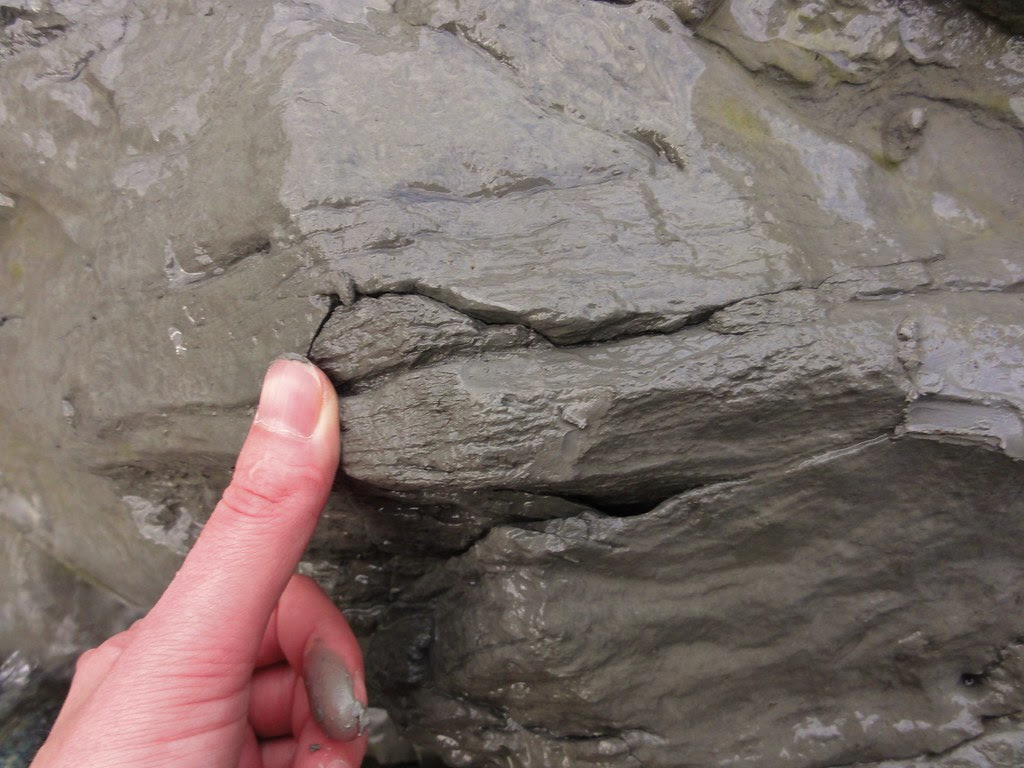 Clay! A pure hunk of clay I could practically throw a pot from, right then and there. I hesitate to admit how excited this made me. I screamed "Clay!" over the cacophony of the river. Actually, shouted it more than once, because my poor intrepid companion couldn't hear a bloody word and had no idea what I was shrieking over. Then he looked a bit bemused that I could get so excited over something so ordinary. But where I come from, clay is never in big wet chunks like this. It's more like dry flakes. Finding blocks that you can actually model with, masquerading as a rock, is probably more captivating than it should be.

It also nearly tipped me into the river before I figured out what it was. Clay is, in fact, slippery when wet.

And just look at the awesome shapes it makes: 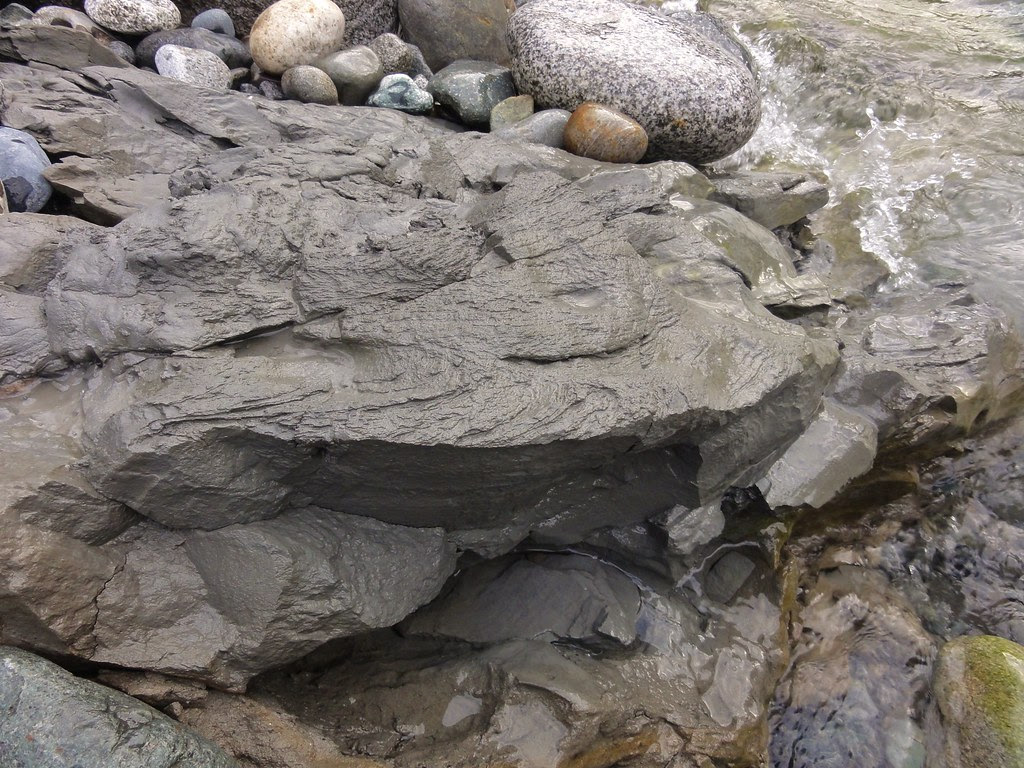 Now, really, can you blame me for getting so giddy?

Aaaand we're right back to me being clueless. 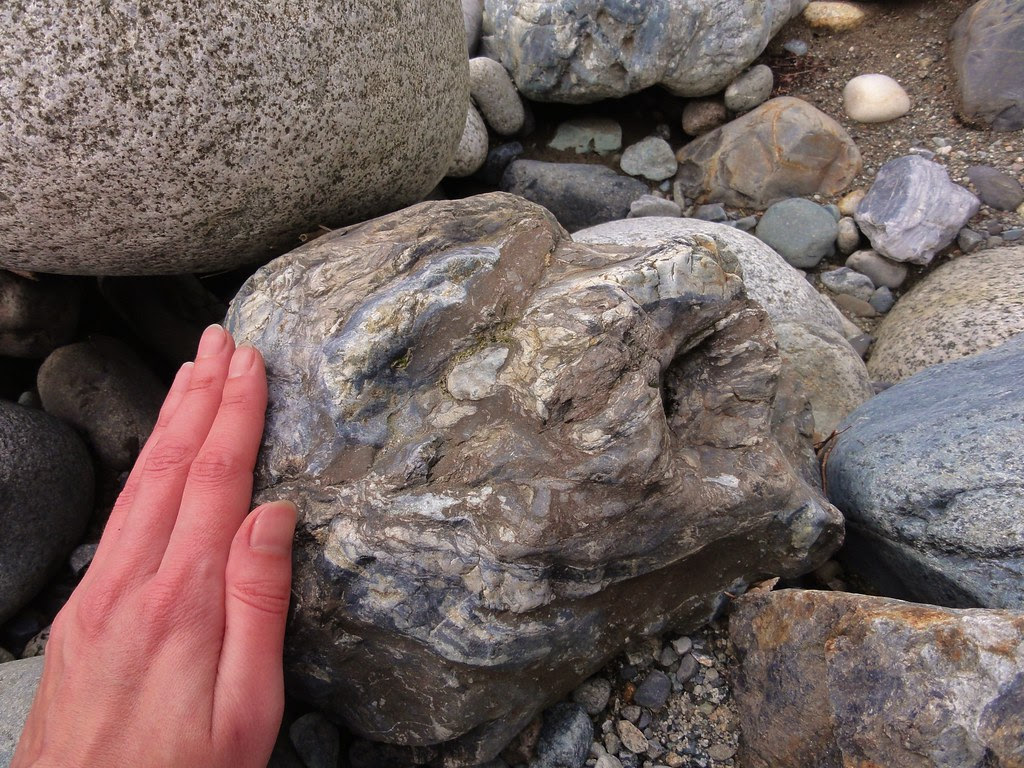 Now, here's something quite exciting: 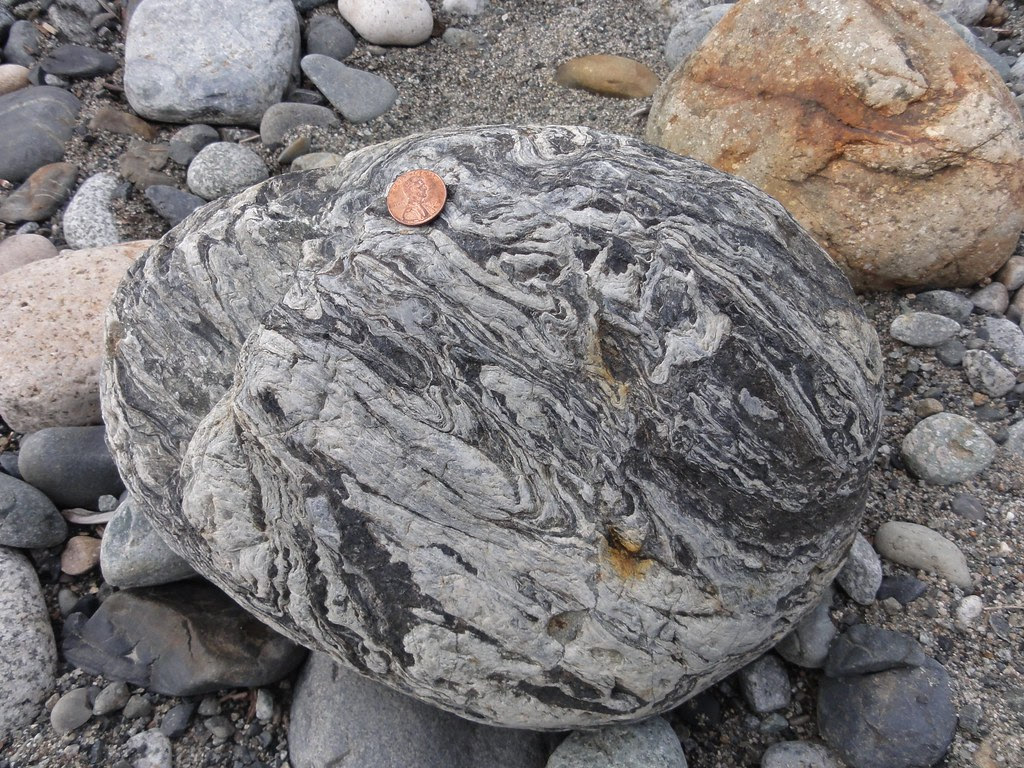 This, my darlings, might quite possibly be an example of the Nason Ridge Magmatitic Gneiss, or a relation thereof. It's certainly got to be a migmatite, anyway. This one's for Christian Renggli, who clued me in. Andrew Alden described migmatites as rocks that had "been buried very deep and squeezed very hard." Fair description - you can tell this rock has had a hell of a life down there in the trench.

While we're on the subject of gneiss.... 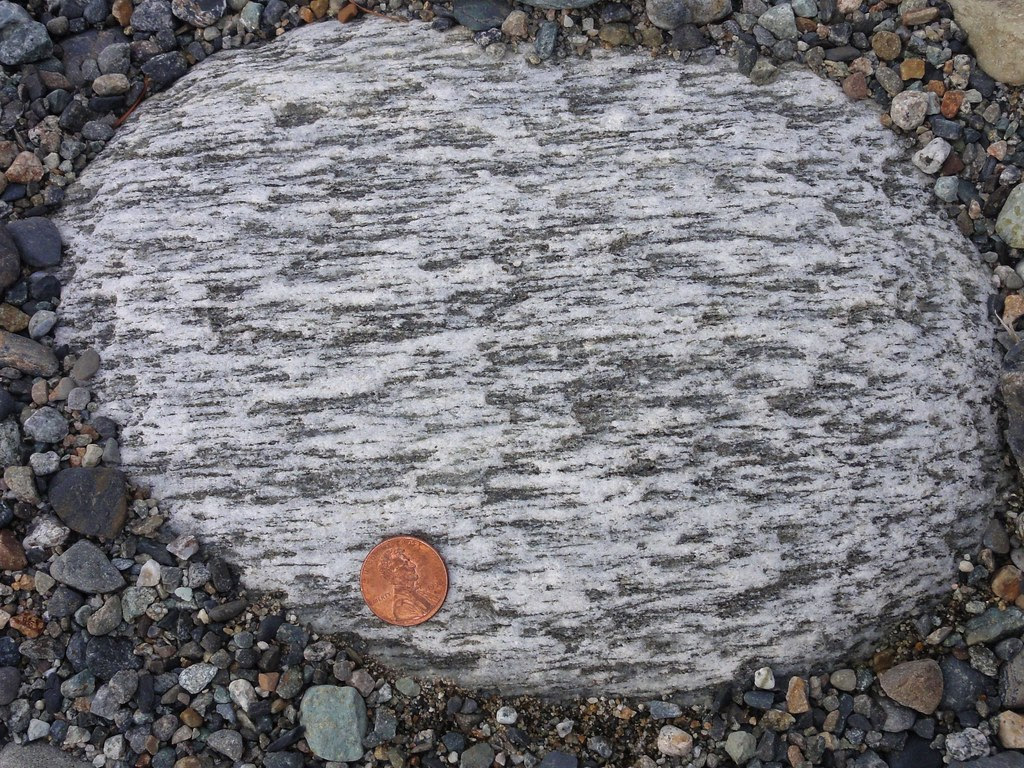 Isn't she a beaut?

This one, I think, may have been granite at one point in its life, or aspiring to become granite, or I could be completely and absolutely wrong, but I love the snowflake textures in it. 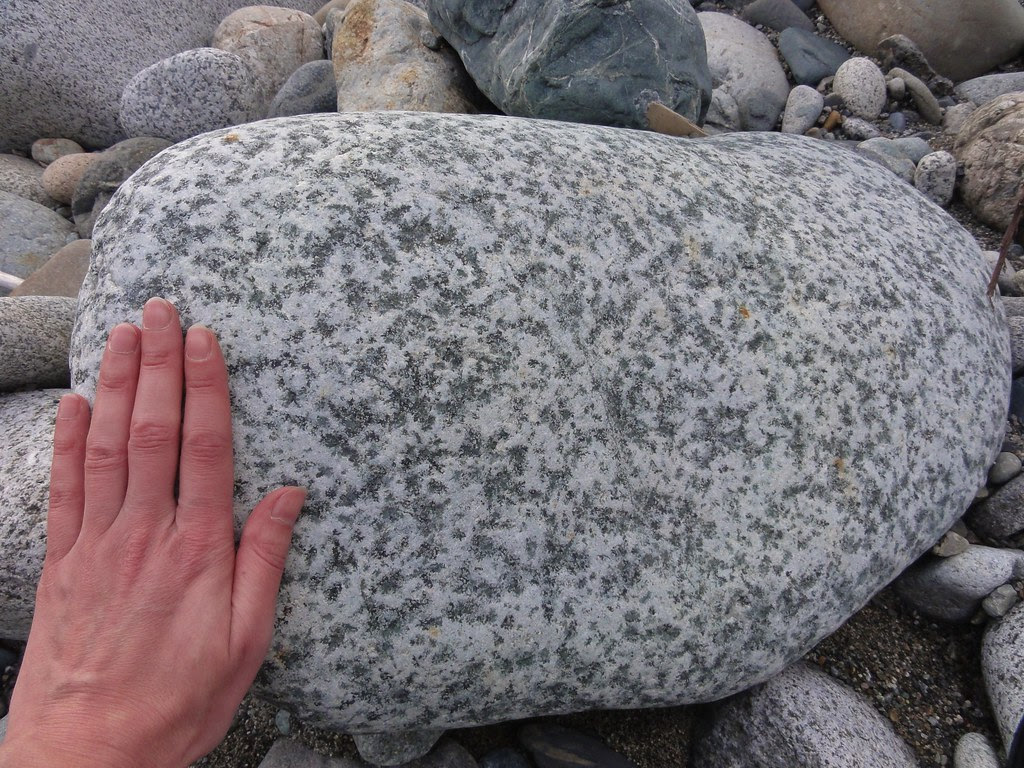 A closer look at what made it stand out from all the other pale-and-dark speckled rocks: 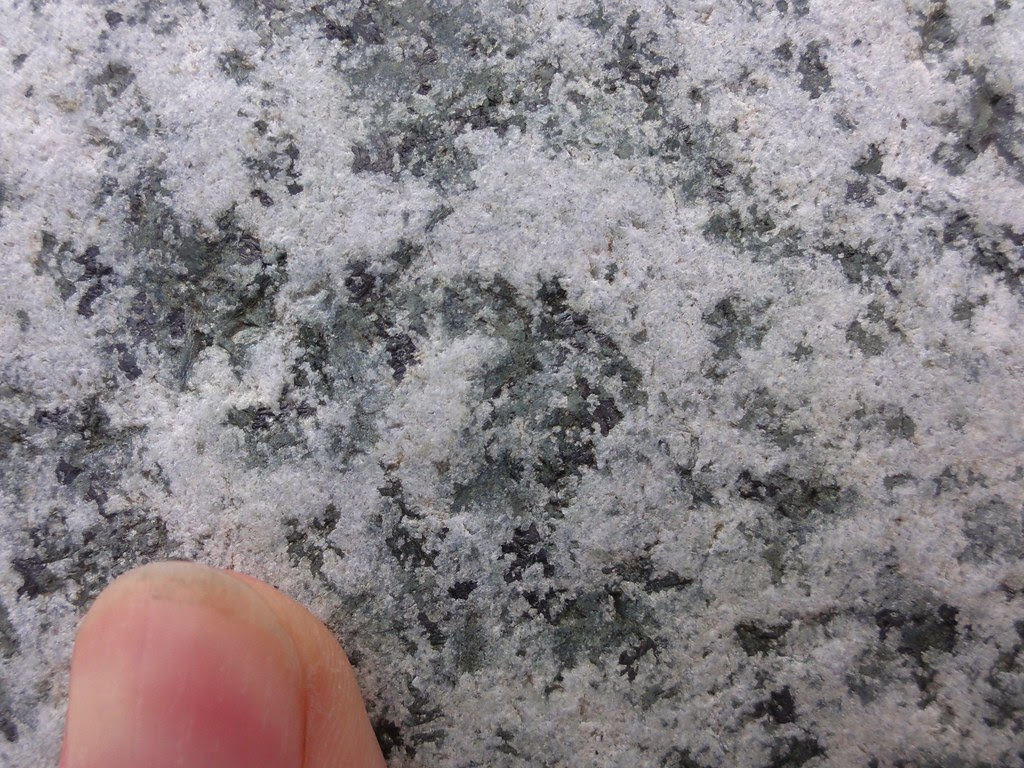 Different rocks affect me in different ways. This one gave me a serene sensation. I'm not sure why. There's just something about it - no streaks, no speckles, just these dark and light patterns that look so much like snowflakes do when a few gather on a rail and get ready to melt - that made me sit back and breathe.  It still does that. Looking at it feels like a meditation.

Now, this one isn't going to look like much, but I'm thrilled with it: 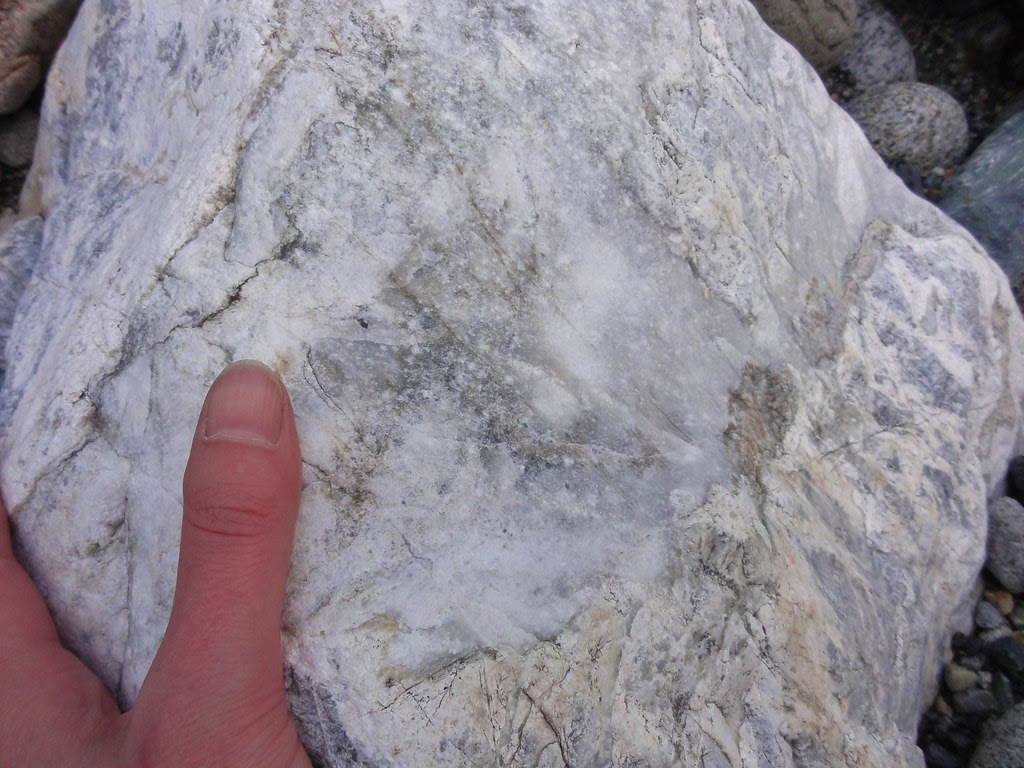 Marble, people! I'd swear that's marble. I loves me some wild marble. We've got a bit of it, no deposits like Italy that I know of, but enough that we've got a town named Marblemount. Though that could've been named after limestone for people trying to be posh - with a town named Concrete nearby, you know there are limestone deposits. But I digress. Yes, we have marble in the wild, and yes, this seems to be a fine specimen. Makes me want to bust out the chisel and make like Michelangelo.

And, for our finale (drumroll, please), a fine bit of phyllite - or possibly slate: 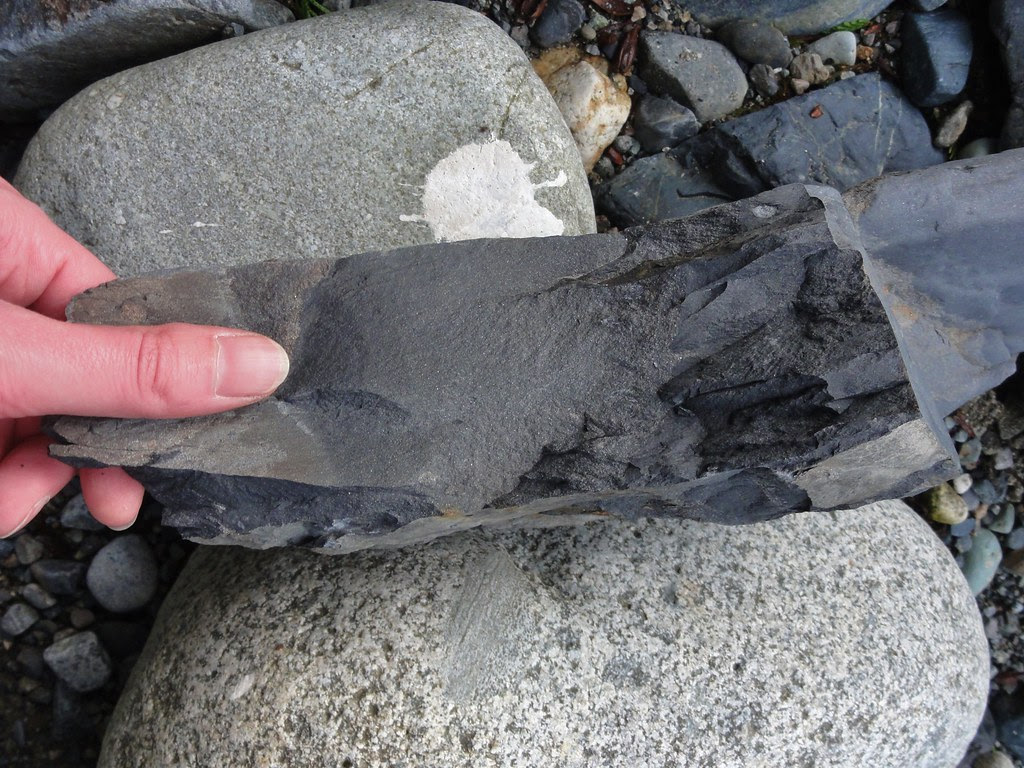 Finding that shattered and gleaming was one of the high points of the day. Love that stuff. Very happy to have brought home a large piece of it. I can hold it in my hands and dream of deep sea floors that got nommed by a trench, then spat back out.

Okay, so that doesn't quite sound romantic or captivating, but it's what happened. And who says dreams can't be humorous?

I shall have quite a lot more to say about this whole orogeny incident, the North Cascades Subcontinent, and even perhaps a fault when I get images sorted from our adventures up north. Watch this space.
Posted by Dana Hunter at 12:01 AM

i love your field trips dana. i never paid much attention to rocks but, thanks to you, i look at rocks looking for the beauty you have shown is there - if ya just look. thank you.