All rested up from Ross Lake, I trust? I certainly hope so. We've got some island-hopping to do. Never mind that it's overcast and rather chilly - this is the Pacific Northwest. If it ain't peeing down rain, it's a beautiful day.

We will, however, get a late start. Might as well have a leisurely lie-in and futz around until check-out time, then head over to Anacortes for picnic supplies. While you're there, check out the view: 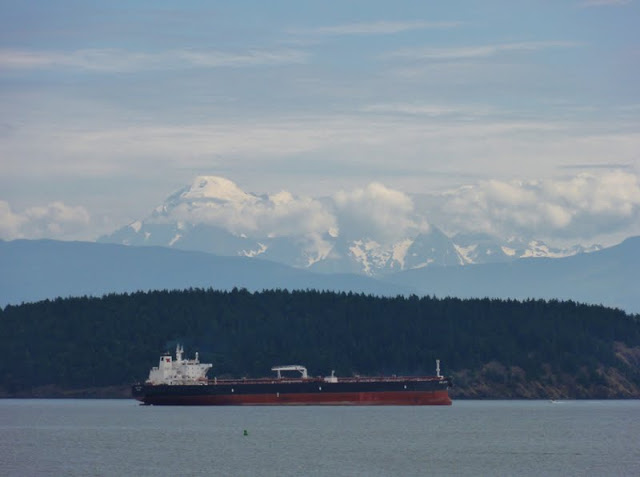 Oh, yeah. I do believe that's Hat Island, and just beyond it Mount Baker puts on a majestic display. This is subduction zone living at its finest.

We went back to Rosario Beach for some follow-up investigation of tide pools and so forth, during which we saw the circle of life in all its glory. In other words, the sea creatures were having lunch, too. I'll be showing you a lot of lovely photos from that experience, once I've got them suitably enhanced. We saw an absolute ton of tiny little hermit crabs in the tide pools, too cute! And starfish and sculpins! Lots of adorable little critters make their living in that harsh environment. It leads to an abundance of squee.

However, we're also pretty close to the naval air station on Whidbey Island, and on a weekday, you'll see a plethora of these fly overhead, reminding you you're not off in the wilds somewhere: 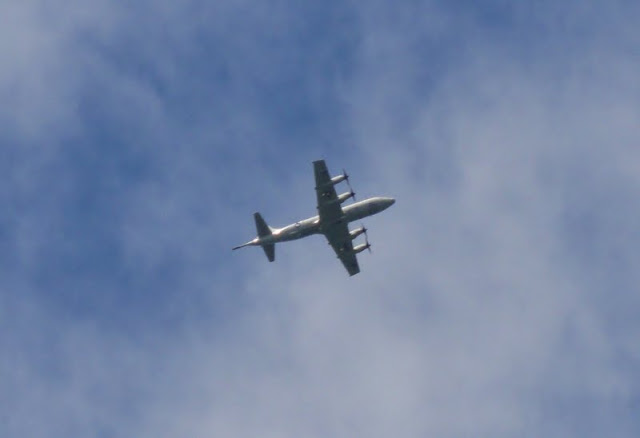 This is the perfect time to tell you I wanted to be an Air Force pilot once, but my vision is teh suck and my desire to join the military only slightly less sucky. Still. Would've loved to fly one of these beauties, and might have done, if that ill-fated attempt to switch my recruitment from the Army to the Navy had gone at all well. Yes, I did once decide I wanted to join the military, but the Army's recruitment process seems designed to ensure that no one makes it through. Probably different now, but this was back in the 90s, when we didn't have several wars on. Well, after a day spent with demoralized-looking hangdog folk stuck with the unglamorous task of processing potential recruits, the group of us were seriously rethinking our decision. Then the Navy boys went marching down the hall, sparking in their navy-blue uniforms, backs ramrod-straight and pride oozing from every orifice.

"We want to join the Navy!" the group of us said.

"You can't," our recruiter said. "You're here for the Army."

Anyway. I digress. Where were we? Ah, yes, lovely marine views. Here's a nice one of Sharpe Cove.

I see the panorama software has issues with waves. Sigh. Still, you get the general idea: all green and blue and lovely.

The clouds actually deigned to part a bit over the Olympics, with excellent results: 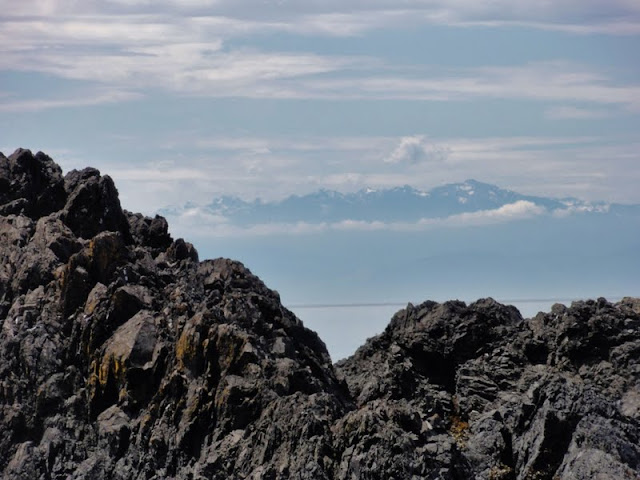 I always laugh when places around here boast of views of the Olympics. Unless you're standing right on top of the Olympics, chances of a view are slim-to-none, and even in the middle of the mountains, it's chancy.

However, there are times when those rumored views become reality, and this was one. 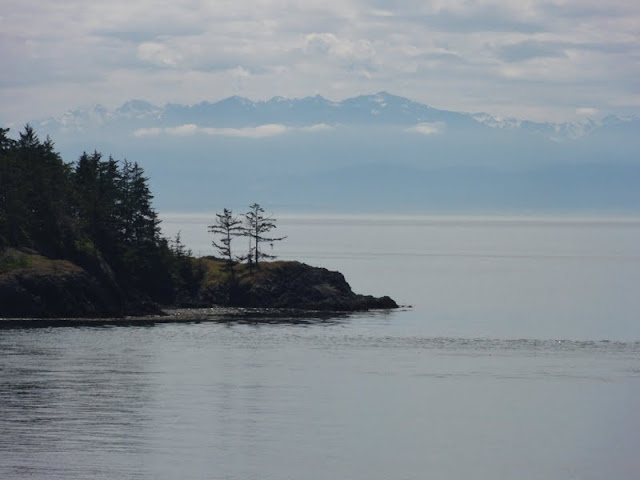 After we got done at Rosario, we headed over to Whidbey Island and what we thought was Blower's Bluff. However. I turned right when I should've turned left. So we saw a bluff, but not Blower's. Still, no regrets. Look who I stumbled across on the beach: 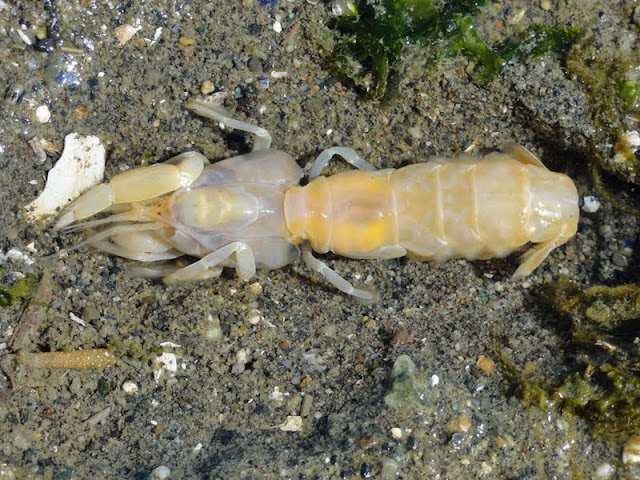 A shrimp! A real, live shrimp, which I have never seen in the wild my entire life. Poor little bugger was stuck in a puddle left by the tide, and he was Not Happy. Or she. I have no idea how to sex a shrimp. I do know that when you pick them up thinking they're dead, and them put them down again, they curl into a rather miserable-looking fetal position: 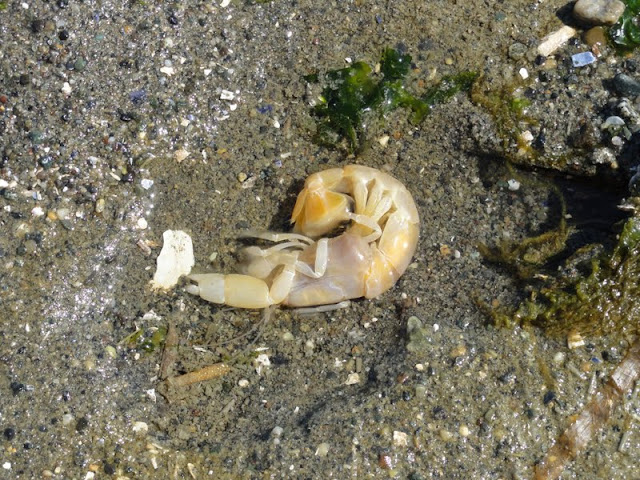 Isn't that just the cutest little pathetic shrimp in a fetal position you've ever seen? Total Emo Shrimp. Poor thing. After showing him/her to my intrepid companion, I had a free-the-shrimp moment. 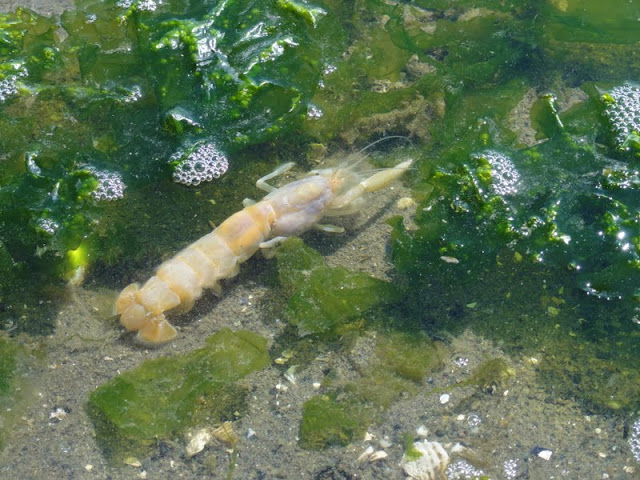 It seemed rather happier with open water and a bay before it.

So my intrepid companion, suitably unimpressed with my shrimp-freeing activities, wandered off, and I proceeded to photograph the shit out of the bluff. Interesting driftwood up against it in some places - I particularly like the roots on these: 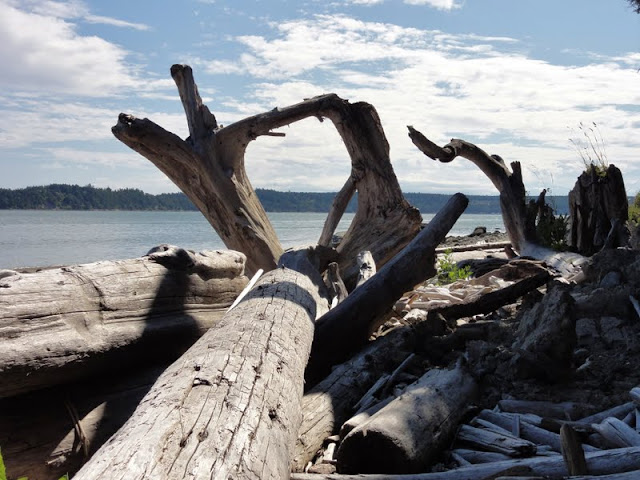 It's not often they're that square. Nature does odd things sometimes.

Speaking of odd things, why not feast your eyes on glacial leavings? Here's a nice view of the mysterious bluff, which is composed of glacial deposits. 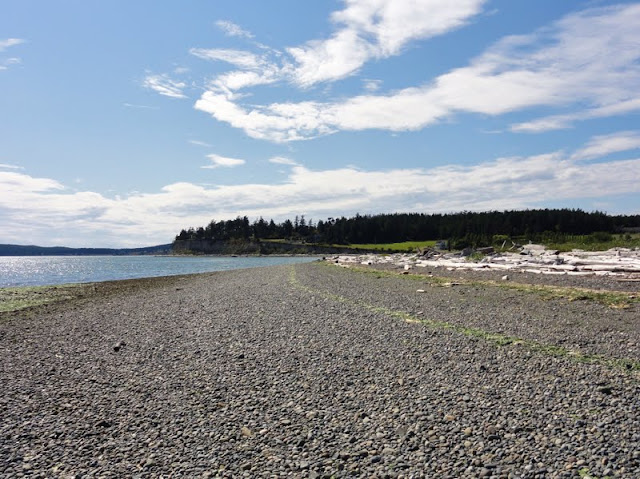 Enjoy it while it lasts. That bluff is retreating at an alarming rate. People building close to the edge of it are hopefully not anticipating being there for long, because they won't be. Glacial sediments do not a stable oceanfront foundation make.

And here endeth the outtakes. Someday soon, I'll be showing you the geology up-close and intimate. We'll have tide pool tales, dueling herons, and absolute bouquets of wildflowers. Just let me get back from Oregon and recover...
Posted by Dana Hunter at 12:18 AM

as with all your field trip posts, i am left wanting more, because even your outtakes are wonderful. more please *puppy dog look*

Yes, Silver Fox. There were several flying around that day, practicing takeoffs and landings, it appeared.

*Squeals* a P-3! They used to fly from Moffet Field in the south San Francisco Bay Area, before the Navy abandoned Moffet to NASA and consolidated the mission at Whidbey Island. I used to start every workday with the sight of P-3s flying in (though, thankfully, I didn't work directly under the flight path -- they're noisy).

I believe Whidbey Island flies a very large fleet of these sub-spotters, and they probably weren't practicing takeoffs and landings but coming in to refuel and take on more sensors. The P-3s drop "listening" sensors (I don't know what the correct term is) and then listen for submarine activity.