I'm beginning to believe the Pacific Northwest is the best place in the United States. Oh, sure, Arizona has drool-worthy rocks and some truly fascinating geological history. Same for southern California, and it has the added bonus of being all warm and sunny with an ocean to die for. The Basin and Range ain't too shabby, and I'm sure Yellowstone's all that. But if you want to see the real geologic mayhem, you've gotta head for an active subduction zone. Which is what we have got. And if you want to get a coast-to-mountains perspective without having to travel far, basing yourself in Mount Vernon is a damned good idea. So many amazing things within easy driving distance that we'll probably be talking about them for months.

On our first day up there, my intrepid companion and I headed west. A quick drive down Highway 20 gets you to Anacortes, on Fidalgo Island. You can have a leisurely lunch whilst contemplating a bay ringed with refineries, and then a short drive takes you to Deception Pass. 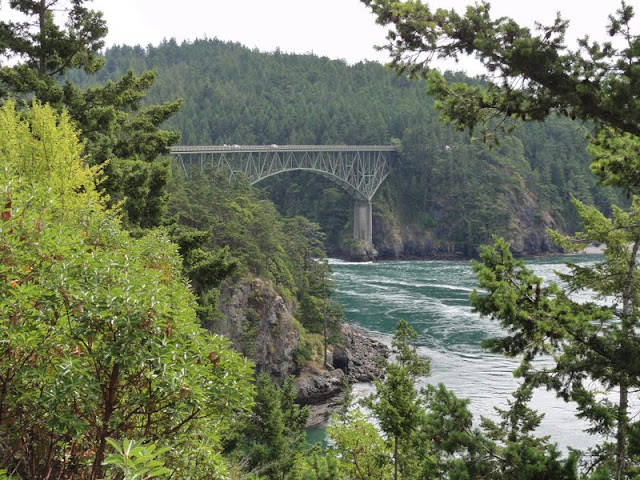 Why Deception Pass, you ask? Well, because we missed the turn for Rosario Beach, and there wasn't a convenient place to turn around, and by the time there was we were so close to the pass we went what the hell and headed on down... oh, you mean, why's it named Deception Pass.

There's a story in that, told on this convenient marker. However, you won't be reading it at first if you're a geology buff, because the bastards set it on some utterly delicious bare, contorted rock. 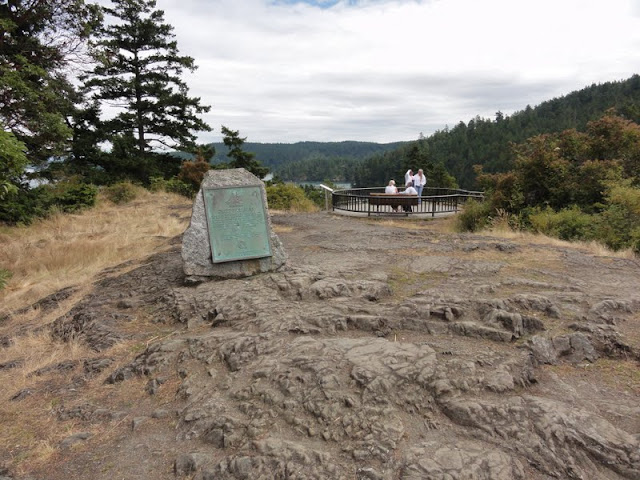 Once you actually lift your nose from the outcrop and read the marker, you'll discover the following: 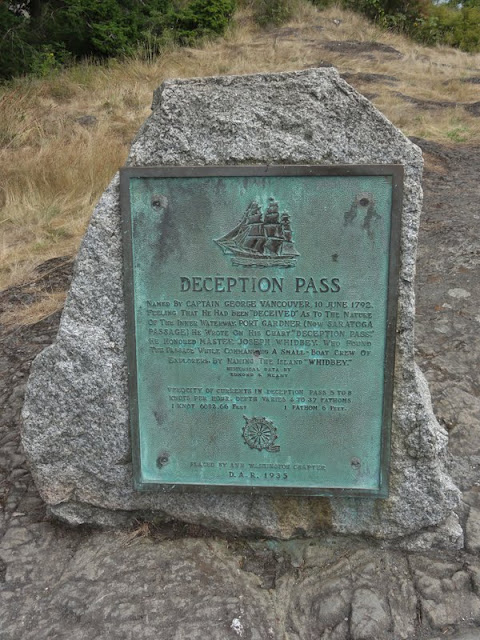 For those who didn't click to embiggen, it states,


Named by Captain George Vancouver, 10 June 1792, Feeling that he had been "deceived" as to the nature of the inner waterway, Port Gardner (now Saratoga Passage) he wrote on his chart "Deception Pass." He honored Master Joseph whidbey, who found the passage while commanding a small-boat crew of explorers, by naming the island "Whidbey."

Captain Vancouver was apparently upset they'd gone so long believing that Fidalgo and Whidbey Islands were actually one long peninsula before the pass revealed the truth, but he could have also named it for the currents. I mean, seriously, the damned strait flows in different directions depending on the tide, and there's some pretty intense whirlpool action going on. 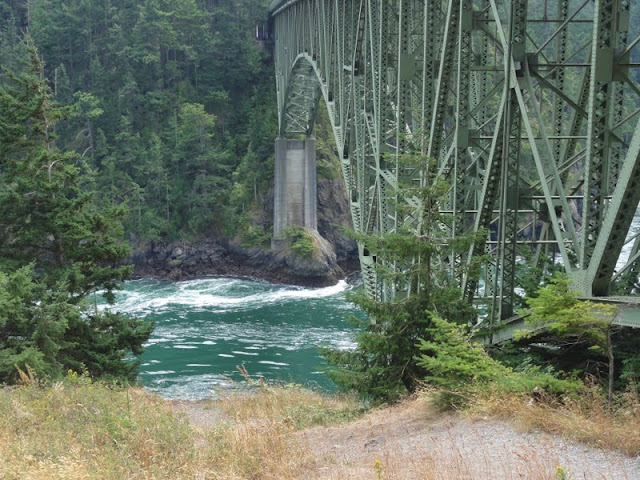 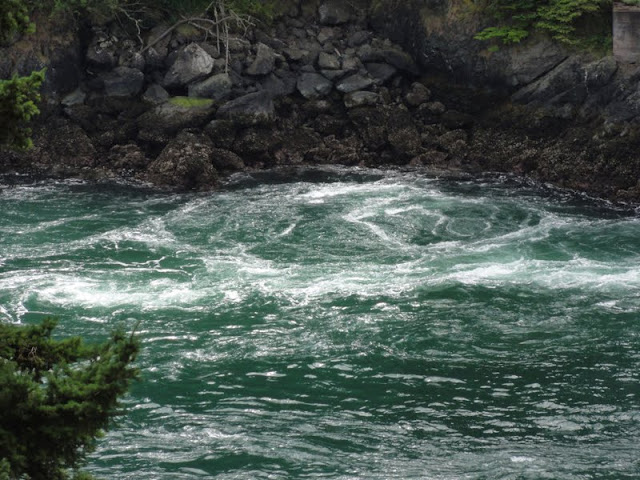 And no, you couldn't pay me enough to navigate that channel in a sail-powered wooden boat, thankyouverymuch.

Now, I'm no chicken when it comes to heights - I've hung out on ledges at the edge of the Grand Canyon (always with another nice ledge safely between me and the really painful drop, cuz I'm sensible like that), I've run on slickrock with a two-hundred foot fall on one side, I cut my teeth on high places - but walking that bridge over Deception Pass made me dizzy. Good dizzy. And there are some astonishingly beautiful sights to see, well worth the vertigo. We'll see more of them when I write up the rocks and the islands and all that.

Right now, we're turning our arses around and headed to Rosario Beach, where we'll come across some amazingly contorted rocks and a beach with the world's best skipping stones and ZOMG BABY BUNNY!!! 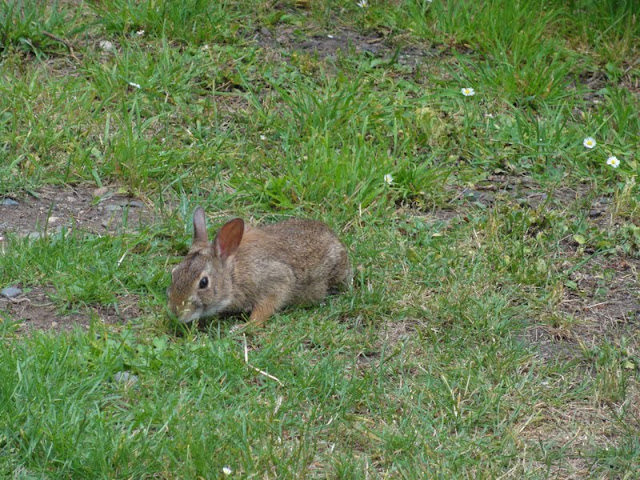 Yeah, some of the biology's pretty cute, too.

And lovely. When you see this delightful little bay over the top of thriving fireweed, it makes you feel all tingly and happy inside. 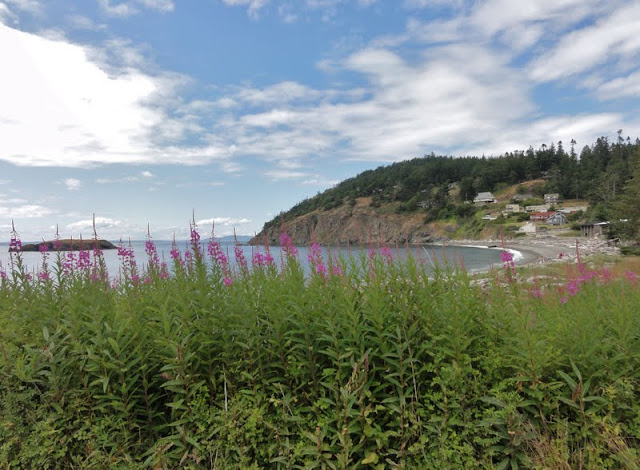 So that's a little bit of all right, then. You know what's really all right? You're looking at some really jumbled geology here. Terranes are just kind of squished and mashed together with the kind of chaotic exuberance that will either make a geologist scream for joy or rip out handfuls of hair, depending on the personality involved. The subduction zone doesn't care about tidy little maps or orderly accretion - it just jams things in any-old-how. Kind of like my packing on the third day of a trip, actually....

We got there as the tide was coming in, so no tide pools for us. That's all right. We had a wonderful ramble along the beach, playing with the skipping stones, and then sat on that nice pebbly shore for a good long while watching the waves work. 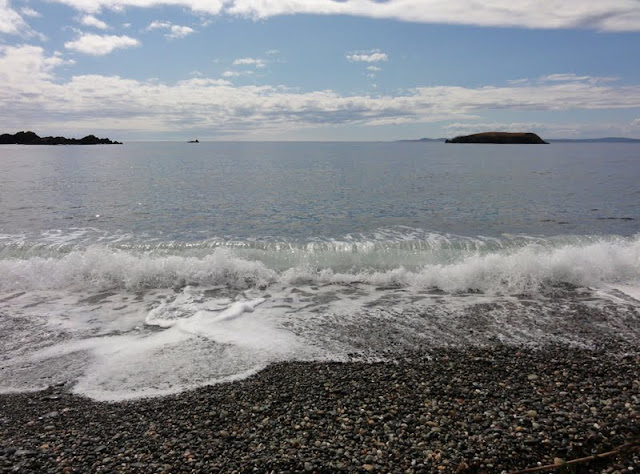 The rocks to the left are eroded bits of Rosario Head, where the tide pools are, and you can see the San Juans in the far distance, across Rosario Strait. The wee little island in the foreground is, I believe, Northwest Island, which is a bit of a dive (ahaha).

Afterward, we headed up on the headland, where the geology is to die for - wait till I show you it! The views are pretty damned spectacular, too, if you can tear your eyes off the rocks long enough to admire them. 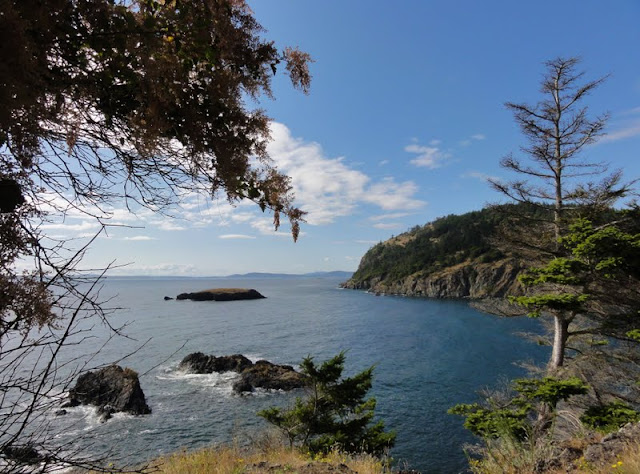 There's this one place on the side of the headland there where the rock is laid completely bare, and there are faults and all manner of fascinating things, and then, when you're done exploring those, you can sit and watch the waves worry at the bits of the tide pools that have the audacity to stick up. 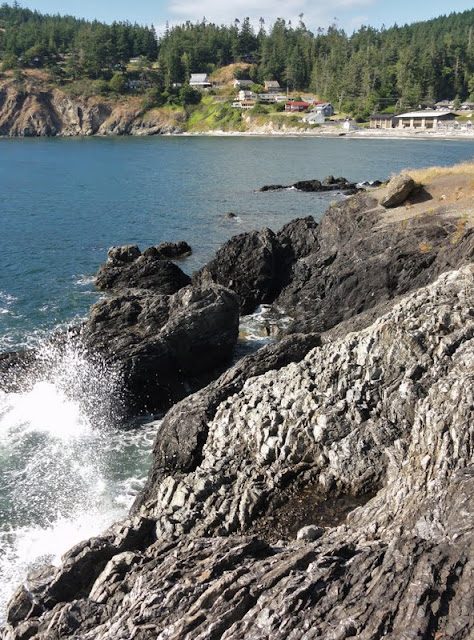 Does that, or does that not, make your stony hearts go pitter-pat, my dear geotweeps? And you don't have to be a geologist to have your breath taken away by those rocks. They're truly awe-inspiring. And you want to know what the best part is? They aren't basalt! After the Oregon coast, it's nice to know that scenery like this can be accomplished with humble old chert and shale, too.

After Rosario, we had a drive round Fidalgo, and came to a wee little park tucked in near the San Juan Ferry, where there were more fascinating rocks (natch), some glacial deposits, and a view across the strait that does the old heart good. 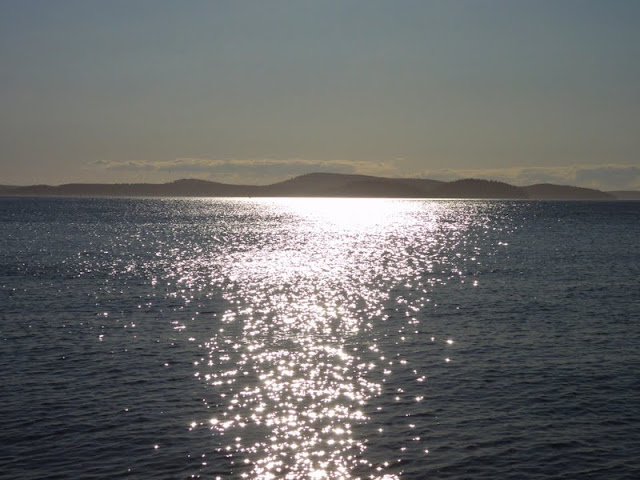 Just sit here for a moment and contemplate the fact that none of these views would be here without the subduction zone and the Cordilleran ice sheet tag-teaming the place. You're sitting on some comfy, chocolate-brown rocks with glacial deposits at your back. Just think about this, as the waves swash up and tickle your toeses, as you absorb all that peace and quiet, that beneath you the last of the Juan de Fuca plate, a remnant of the older and grander Farallon plate, is sliding beneath North America. You are the cherry on top of a nice, marbley layer cake of oceanic and continental crust. I suppose the glacial outwash counts as the icing.

Alas, 'tis time to leave the ocean behind. We're headed for the hills next, and oh, what hills they are.
Posted by Dana Hunter at 12:01 AM

Beautiful pictures and awsome geology. The sign is wrong, however, in stating that the knot is a unit a distance. It's a unit of speed equal to one nautical mile (1.852 km) per hour.

Yes, I remember grinding my teeth when I saw that one...