The Greatest Show on Earth, Mark II: Q & A with Richard Dawkins

Ten days ago, Richard Dawkins spoke to 4,500 Seattle residents about the evidence for evolution.  In Parte the First of my report on the great day, we read the bits of Dawkins's wonderful book The Greatest Show on Earth that he shared during his lecture.  I promised you then we'd have the Q & A next time, and the Q & A we shall now have.  Few verbatim quotes, alas - my shorthand skillz are not mad, they're sad.  But we shall do our best. 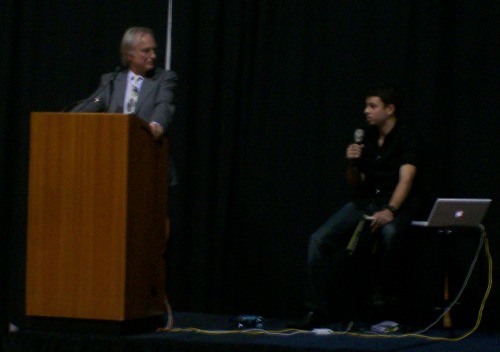 Verbatim stuff's in quotations, fairly-accurate paraphrasing is indented, and my outtakes are not.  I hope I haven't sowed a bunch of confusion by trying to avoid it, but we shall see.

All questions came from the audience, either written on index cards or texted in, relayed by President Michael Amini of UW's Secular Student Union, and heartily enjoyed by us all.  Except, perhaps, poor Richard, who's had to answer some of these ad nauseum.  People don't know what a famous man suffers on the lecture circuit.  Dawkins is thrilled to discuss evolution and the evidence for it, but as you shall see, not so thrilled with some of the trifles thrown at him.  Refer back to the above photo when we hit that question, because his expression is priceless.


Q.  Amini apologized for the Discovery Institute, which got a hearty laugh from everybody and, as I recall, a rather appreciative twinkle from Dawkins.  Then he asked whether Dawkins believed any amount of evidence would convince people like the DIsco Tooters.

A.  Dawkins said "the most spectacular example" is Kurt Wise.  "In some sense, he must know the Earth is old, yet he is a Young Earth Creationist."  Dawkins noted Wise [sic] is honest enough to state that if all evidence pointed unavoidably to evolution [ed.: which it does, but apparently mountains o' evidence aren't enough for him], he'd be the first to admit it, but Scripture would trump that evidence.  That observation led Dawkins to say that Wise [sic] seems to him to be a "disgrace to human intellect."


Dawkins then said that there's no hope of converting such people.  We "must bother with the enormous numbers who don't realize what the alternative" is.


And that's why he's written this book, to present the evidence for evolution to those who are reachable.  Let us hope they are reached.

Q. What are important unanswered questions?


A. "What sex is all about is still a bit of a riddle... Seems a rather odd thing" to mix 50% of our genome up every time we reproduce.

The origin of life is still a "complete mystery."

"Where does subjective consciousness come from?"  To him, this is the most important question.


I'm sure some creationists scream with joy over those gaps in our knowledge, but they should keep in mind just how quickly science tends to shrink such gaps.  I myself believe that the above questions will be answered in my lifetime, as long as I don't get run over by a bus next week.  And I'm excited about it.  So does Dawkins seem - he loves asking those questions.


Q.  Where do you get your moral code?

A.  Dawkins discussed the "subtle and shifting zeitgeist."  Basically, he says that morality is something we get from each other, and it "applies to all of us whether or not we're religious."


I believe he pointed out that morals change over time - even religious morals have changed.  I seem to remember a lot more from this than I wrote down, but it's nothing he's not said before, in The God Delusion and elsewhere.


The claim that morals come from the Ten Commandments is "absolute piffle."

Dawkins then discussed the evolutionary basis for morality.  Extensive morality - the kind that extends to strangers half a world away - may be a misfire of morality developed in small groups.  The rule of thumb then was "be nice to everybody you meet," and that still works.

Dawkins said we may have a lust to do good the same way we have lust for sex.


Q. Someone asked the difference between "theory" and "law." 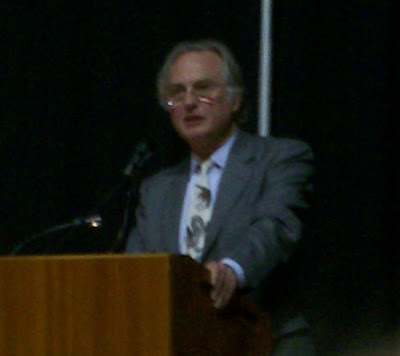 Q.  Where did you get your Crocoduck tie?

A.  It was made for him by Josh Timonen*, who runs RichardDawkins.net.  He had plenty of flattering stuff to say about Josh's creativity.

The "reason for crocoducks, of course," is because they're a "more than usually stupid plea for intermediates between any animal."  Dawkins said you might as well ask where the kangaroaches or hippopotamanzees are.


It's a concept he expands on in his book, and it's hilarious.  One of the things Dawkins is best at is ridiculing stupidity with elegant British relentlessness.


Q. What is the current status of human evolution.

A.  Dawkins said we now have a lot of fossils Darwin didn't have, and we now know the order in which we developed our distinctive bidedality and large brains.  We can trace that through the fossils.

For big brains to continue getting bigger, the brainiest individuals must have the most children.


Here, he paused with a sardonic twinkle, and the entire audience busted up laughing.  All of us are all too aware it seem to be the stupidest people breeding the most these days.


Dawkins continued, "It's sometimes said [human] evolution's come to an end," and "there's something to be said for that."  There's "not much in the way of selective death," differential survival.  Other selective pressure could still be ongoing.  He talked a bit about selection in favor of those incompetent at using contraceptives.


Q.  What would your theme song be?


Refer to the above photo.  There's nothing quite like Richard Dawkins trying to find a polite way to say, I can't believe you thought that, out of the over 500 questions submitted, was one worth asking.


Q.  Hypothetical: you have to give a three-minute pitch for evolution while in an elevator with someone skeptical of evolution.

A.  Dawkins would choose to emphasize either the geographical* distribution of species or comparative molecular similarities between species.  He continued along the molecular lines, pointing out that we can now count the differences between genomes and construct a perfect family tree.


That's powerful stuff, that is.  And if you read The Greatest Show on Earth, you can make that elevator pitch using either example.


Q.  What is the difference between micro- and macro- evolution?

A.  Microevolution is the day-to-day, month-to-month, year-to-year fluctuation in gene sequences.  Dawkins used the example of the changing length of mouse whiskers in a population.  Macroevolution is what you get when you simply "leave microevolution to go on for a very long time."


Yes, indeed, it's really that simple.  Which leads me to suspect most creationists are being deliberately dense about it.


Q.  Do you celebrate Christmas?

A.  "I am a cultural Christian.  I live in a country which I would prefer stay Christian" rather "than the alternative" [ed.  I do believe he's talking about the fact that fundamentalist Islam and sharia law's becoming rather prevalent in Britian, and yeah, I see his point].  "I do celebrate" Christmas, but "can't say as I enjoy it much... I don't regard it as a very big deal."


And can you believe we ended a lecture on evolution with that inane question?  I have a feeling a few non-skeptics slipped in through the door, because that's just a silly thing to ask.

Alas, between my poor memory and horrid note-taking, that's all I can report.  I do remember thinking several times, though, that the morons who think Dawkins is somehow wobbling on the whole accomodationist question are just fucking idiots.  There was nothing, not when he was discussing the science or morality or even Christmas, that even hinted at an accomodationist stance.  Here's the sense I got: he'll tolerate religious scientists and religion in the culture at large because it's simply unavoidable.  But his stance hasn't softened at all: science and religion, religion and reason, aren't compatible, even though they can exist somewhat simultaneously in the same mind.  Anyone with any lingering doubts on this score should visit the above link.  And then visit here for the coup de grace.

I didn't get a chance to speak with Dawkins afterward (or get the book signed, damn it), but I did manage to snap a picture on the way out.  I hope the light from my flash reflecting above his head shall prove a useful metaphor for those who should really have some lightbulbs going off. 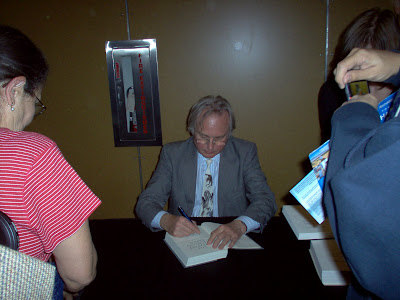 Since seeing him in person, and now reading The Greatest Show on Earth, I've gained a far deeper appreciation of Richard Dawkins.  He's a brilliant man, a very British man, a delightful and charming and unrelenting man, and we're lucky to have him as one of evolution's champions, Darwin's rottweiler, as it were.  Thomas Huxley would be proud.


Photos of Richard Dawkins taken by my dear friend and official Thinking Brain Dog, Cujo359.  All except that absolutely awful one of the poor man signing books against a wretched backdrop, which you can blame on me.

Q. Where did you get your Crocoduck tie?

A. It was made for him by Tim Minchin, who runs RichardDawkins.net. He had plenty of flattering stuff to say about Tim's creativity.

I'm pretty sure it was Josh who gave Richard the tie.

Tim Minchin would likely be too busy, what with all the flying back and forth between the UK and Australia and performing.

And here's some evidence:

Dawkins would choose to emphasize either the geological distribution of species

Thankees. What did I tell you about my shorthand skillz and my memory, right?