Science at the Show


Alas, no deliciously-researched, fresh-out-o'-the-lab science today, my darlings.  I haven't had time to research a thing.  No more Ardis have been unleashed upon the world.  And I want to talk about Superman anyway.

As most of you know, I've spent the last summer reading every science book I could lay my hands upon.  And you've heard me bemoan my woeful ignorance.  I have a memory like a rusted-out sieve, I have the mathematical comprehension of a brain-damaged mouse, and when it comes to being able to visualize these very difficult concepts - well, show me a video, because I can't do it myself.  I often despair.  I'll never know enough or understand enough, and it sometimes seems I've retained nothing from all that reading.

Turns out, I've retained far more than I thought.  And so follows a tale of two viewings of Superman Returns.  The connection shall become clear in a moment.

I first saw Superman Returns when it was released in the theatre. Three years ago, I knew a bit about astronomy, geology, physics, and such, but not enough to really internalize anything.  When I scribbled about the movie in my journal, my focus was on the characters and story.  I hadn't paid a bit of attention to the science.  In fact, I don't believe there was a single instant during the movie where science really impinged upon my awareness. 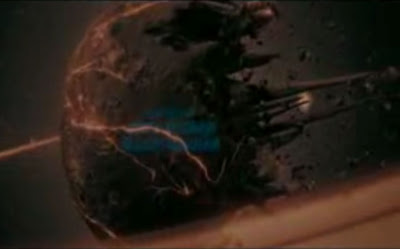 Not so, now.  And that awareness began with the opening credits.  You see, now I know why planets are spherical.  So this half-a-planet with rings just didn't ring (ha) true.  Maybe a planet could've esploded, but leaving half all sharp and pointy whilst still having a beautiful ring system?  Really?  No.  It's visually pleasing, but as far as finding something like that out in the universe, I highly doubt it.  And here's the reason why:


One consequence of Newton's law of gravitation - which states that as the distance between two objects increases, the gravitational pull between them becomes weaker by the square of their separation - is that all planets are round.  A sphere has a volume that grows with the cube of the radius of the orb, while its surface area increases with the square of the radius.  This combination of the square of the radius for the surface area with the inverse square of the gravitational force leads to a sphere being the only stable form that a large gravitational mass can maintain.  In fact, to address the astrophysical question of what distinguishes a very large asteroid from a very small planet, one answer is its shape.  A small rock that you hold in your hand can have an irregular shape, as its self-gravitational pull is not large enough to deform it into a sphere.  However, if the rock were the size of Pluto, then gravity would indeed dominate, and it would be impossible to structure the planetoid so that it had anything other than a spherical profile.


That's from The Physics of Superheroes by James Kakalios.  Damned good book.  I highly recommend it.

So, half a planet with a ring system - not no, but hell no.

Moving on, then.  What about all that vaunted super-strength?  We Earth-bound misfits tend to think that it's a simple lack of strength that prevents us from doing things like, oh, say, catching jets and throwing unwanted continents off the planet.  At least, we think so if we don't know much about physics.  As I watched Superman grab the runaway jet at the beginning, I kept thinking of things like mass and inertia.  In order to stop the thing, Supes needs more than super-strength.  He'd need super-propulsion, and just where the hell is that coming from?

It's magic, obviously.  Has to be, because it just ain't happening in the real world.  I don't care how super he is, the propulsion has to come from somewhere, and it takes a hell of a lot of energy, and even if the biological being in question's from Krypton, not bleedin' likely, guv.

Not that I didn't enjoy watching said scene, especially when the filmmakers had the presence of mind to show the jet plane deforming under Superman's grip.  That was actually kind of neat.

Here's what I really want to talk about, though: lifting a continent on your shoulders.  And here's where I turn to James Kakalios once again, because he's already done the heavy lifting for me:

It is worth pointing out here that mass is not the same as weight.  "Weight" is another term for "force on an object due to gravity."  Mass, on the other hand, is a measure of how much stuff ("atoms" for you specialists) an object contains.  The mass of the atoms in an object is what gives it its "inertia," a fancy term to describe its resistance to change when a force is applied.  Even in outer space, an object's mass is the same as on the Earth's surface, because the number and type of atoms it contains does not change.  An object in outer space may be "weightless," in that it is subject to a negligible attractive force from nearby planets, but it still resists change in motion, due to its mass.  A space-walking astronaut in deep space cannot just pick up and toss a space station around (assuming she had a platform on which to stand), even though the station and everyone on it is "weightless."  The mass of the space station is so large that the force the astronaut's muscles can apply produces only a negligible acceleration.

When the astronaut mentioned above pushes on the space station, the force her muscles exert provides a very small acceleration to the station, but the station pushes back on her, and her acceleration is much larger (since her mass is much smaller).


So.  Even setting aside the difficulty of getting a small continent (okay, largish island) out of Earth's gravity, ignoring the small detail of how much energy it would take to accelerate such a thing to escape velocity (11.2 km/s, remember!), and other such quibbles, it's still a little hard to swallow Supes tossing a continent off into outer space.

I'm sure some genius can come up with something, but since I'm not seeing flames shooting out of his arse and people behind him aren't getting blasted to bits by some propulsive force, I'm a little not inclined to swallow easy explanations.

We won't discuss Supes' super breath, because I think we all know that no matter how hard he can blow, his lungs have finite capacity.  It would take a lot more than a lungful of air, even fast air, to blow out a gas explosion.

But we will ask a question related to the earthquake that started the gas explosion in the first place: where the fuck is the tsunami?

Seriously.  You drop a crystal in the ocean.  A continent suddenly springs up.  Helllooo, displacement!  Eureka?  Does no one remember Archimedes?


The most widely known anecdote about Archimedes tells of how he invented a method for determining the volume of an object with an irregular shape. According to Vitruvius, a new crown in the shape of a laurel wreath had been made for King Hiero II, and Archimedes was asked to determine whether it was of solid gold, or whether silver had been added by a dishonest goldsmith.[13] Archimedes had to solve the problem without damaging the crown, so he could not melt it down into a regularly shaped body in order to calculate its density. While taking a bath, he noticed that the level of the water in the tub rose as he got in, and realized that this effect could be used to determine the volume of the crown. For practical purposes water is incompressible,[14] so the submerged crown would displace an amount of water equal to its own volume. By dividing the weight of the crown by the volume of water displaced, the density of the crown could be obtained. This density would be lower than that of gold if cheaper and less dense metals had been added. Archimedes then took to the streets naked, so excited by his discovery that he had forgotten to dress, crying "Eureka!" (Greek: "εὕρηκα!," meaning "I have found it!")[15]

Even if it weren't for the fact that a huge freaking landmass just displaced a fuck of a lot of water, we had an earthquake to contend with.  We should all know about the relationship between earthquakes and tsunamis by now.  Here it is in a one easy picture:

Water go sploosh.  Metropolis go under.  It looks like it's right at sea level, after all.

But one thing was nice: the kryptonite continent looks a bit like schorl, so that was a little bit of all right.  At least they made a continent grown of crystal, from crystal, look somewhat plausible.  Enough to delight this geology buff, anyway.

Yes, it doesn't take much to please me, as long as the story's decent enough.  And that's really the point, isn't it?  Superman doesn't have to be super science.

But it's a damned lot of fun to pick on the lack of science, innit?  And at least all of my science quibbles assured me of one thing: I've learned a hell of a lot more than I'd thought.
Posted by Dana Hunter at 2:29 PM

You could almost convince me that a planet could look that that one in the first picture, as long as it had exploded (or whatever) somewhat recently. OTOH, I don't know how the ring system would remain intact. The displaced bits of planet, and the gravity well that was no longer created by a sphere would probably distort or disperse it.

You're now officially a geek, and I mean that in the nicest possible way.