So no shit, here I was beavering away at the blogging, and all of a sudden I notice the house is juddering and the cat's sitting bolt-upright acting like the world's coming apart. The shaking lasted nearly a minute. It wasn't the kind of thing that would make a Californian blink, but to this Arizona girl, it was a little intense - and exciting.

Had to be an earthquake. The only other thing that could cause the house to start dancing would be an explosion, and while I had the headphones on, I didn't have the music on that loud.

The cat is currently sitting by my chair pretending she never panicked, nuh-uh, not even a little bit.

The sensation of an earthquake's hard to describe - it's like being on a rollercoaster that's rapidly weaving side-to-side. The power of it is astonishing. My gliding rocking chair didn't know what to do - it was trying to go in all directions at once, which added something of a washing-machine-from-hell element to the whole experience. You can feel it in your whole body. Bizarre. 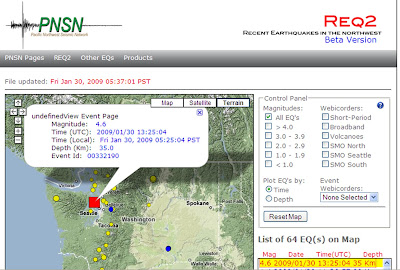 Magnitude 4.6 is about what I expected. According to the Nevada Seismological Lab, the approximate energy of this thing was somewhere between a small nuclear weapon and a decent-sized tornado. Nice!

Now let's check out its intensity. I'm going to have to guess here, but this fits the bill:

The blinds were swaying. The walls were vibrating. But crap didn't fall down, so yup, I'd say we've got ourselves a IV.

Not that I'm a geologist or even particularly good at reading maps, but it looks like this one hit right on the Seattle Fault:

The Seattle Fault is a zone of multiple shallow east-west thrust faults that cross the Puget Sound Lowland and through Seattle, in the US State of Washington, in the vicinity of Interstate 90. First suspected from mapping of gravitational anomalies in 1965 [1] and an uplifted marine terrace at Restoration Point (foreground in picture), its existence was definitely established by a set of five reports published in Science in 1992. These reports looked at the timing of abrupt uplift and subsidence around Restoration Point and Alki Point (right side of picture), [2] tsunami deposits on Puget Sound, [3] turbidity in lake paleosediments, [4] rock avalanches, [5] and multiple landslides around Lake Washington, [6], and determined that all these happened about 1100 years ago (between A.D. 900-930 [7] ), and most likely due to an earthquake of magnitude 7 or greater on the Seattle Fault.

We are also, if you recall, right by a subduction zone, where the Juan de Fuca Plate slides under the North American Plate, and causes things like earthquakes and Mt. St. Helens. It could also cause tsunamis, which is going to delight my stepmother. She, after all, is relatively convinced that moving up here means I'm going to get sucked into the sea.

Maybe I should be worried about that. I've moved to one of the most geologically active areas in the United States. I could easily end up an eye-witness to a devastating earthquake or catastrophic volcanic eruption. Tsunamis are definitely on the list of potential fun. That's too close for comfort for my stepmother, and used to be for me.

But damn it, after getting over the shock of realizing I was in a really-real earthquake, I'm grinning from ear to ear. This shit's exciting. It's a delight to be here where the earth's reforming itself beneath my very feet. It's one thing to read about it, quite another to live it. Now I understand why geologists look like kids at Christmas when they get to go into the caldera of an active volcano.

So there ye go. My first fun with earthquakes (that teensy tiny tremor several months ago doesn't really count - it wasn't even a kiddie ride). I never thought in a million zillion years I'd say this, but I'm almost hoping for an aftershock.
Posted by Dana Hunter at 5:32 AM

What you DON'T hope for is that what you experienced is a foreshock of a bigger quake.

I've had a couple of the "fun rides", but the last was waaay bigger than I wanted ('89 Loma Prieta), and waaay smaller than what's likely to come (big Hayward Fault quake).

May all your earthquakes be of the "fun ride" variety.