Q The administration has been boasting about the success of the President's war on terror, yet data compiled by the RAND Corporation show that the global rate of terrorism, as measured by the number of people killed per year, increased by almost fivefold during the Bush presidency. And according to the government's own terrorism statistics, 2007 was the worst year ever, with over 22,000 people killed worldwide. Does the President consider that record a success?

MR. STANZEL: The President considers it very much a success that we have kept this nation safe since the devastating attacks of 9/11. The magnitude of the attacks on 9/11 were unprecedented, unseen, when 19 individuals armed with box cutters flew airplanes into the World Trade Center, the Pentagon, and were fought and died in a field in Pennsylvania.

We have taken the fight to the terrorists. It has been this President's sole mission throughout his presidency to confront those threats where they are. He has a much talked about Bush Doctrine. The President has made it very clear that if you aid, abet, house, feed, fund a terrorist, you are just as guilty as the terrorist, and that we will also confront the challenges where they emerge so we don't have to face them here at home. And we will work to spread an ideology of hope and freedom, which will be the ultimate tool in combating terrorism around the world.

Q But shouldn't the anti-terrorism efforts reduce terrorism rather than increase it?

Heh. So much for moving on. Can we pull the photo from that briefing, please? 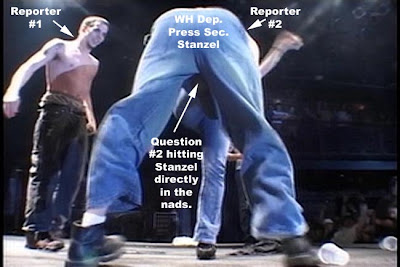 All joking aside, look at the situation here. Terrorism has increased since Bush started his War on Terrah. We are now more vulnerable than Scotty Stanzel's vulnerables. And Bush considers this a success because so far, the terrorists have been so busy killing our troops and tourists over there that they haven't made it over here just yet.

You have to marvel at the sheer scope of the stupid. It's truly monumental.

But not quite as monumental as the stupidity of the fucktards who think Bush is the Greatest President Evah:

It's a close contest, to be sure, but I'd argue that of the various sycophant hacks still singing George W. Bush's praises, none is quite as embarrassing as Fred Barnes, the Weekly Standard editor and Fox News contributor. He's fully immersed himself into a virtual-reality world in which Bush and Cheney are triumphant heroes, wrapping two successful terms.

Slate's Jacob Weisberg noted this morning that it's a "brainteaser" to come up with "ways, however minor, in which Bush changed government, politics, or the world for the better." But while credible historians debate whether Bush is an abysmal president or the most abysmal president, there's Barnes. In his latest gem, published in the new issue of his magazine, Barnes insists Bush's presidency "was far more successful than not," and Bush's "courage" not only "merits special recognition," it exceeds that of Ronald Reagan. Seriously.

Do you want to know what's on Freddie's list of Bush's top-ten bestest achievements? Are you ready? Really ready? You've braced yourself, turned off the irony meter to prevent unwanted explosions, ensured you're strapped in? K. Here's the top three:

1. Bush stood up to "global warming hysteria," and helped undermine the agenda of "alarmists."

Oddly enough, those are among the top reasons why Bush is leaving office with approval ratings that can be measured by people who can't count to thirty. Yet, in Fred Barnes's world, this are great achievements.

I can't even make fun of them anymore. I mean, how can you blame the mentally ill for their delusions? The poor little fucktard needs our sympathy and an arsenal of anti-psychotic drugs.

We may want to stick Henry Paulson on the same ward with Freddie:

Yesterday, Treasury Secretary Henry Paulson sat down for an interview with Bloomberg, to discuss the effectiveness and future of the Troubled Assets Relief Program (TARP). Paulson has faced significant criticism for refusing to use any TARP money to address the housing crisis. When asked why he hasn’t used the TARP this way, Paulson said he was “reluctant to move ahead with a foreclosure plan” because it would not give “maximum bang for the buck.”

These are "troubled assests" because people can't fucking pay the mortgages they're based on, you dumbshit.

And then it gets worse:

Addressing foreclosures is key to combating the economic crisis, but evidently Paulson believes that more “bang for the buck” comes from throwing money at banks and letting them do with it what they will. According to a new report from the TARP’s congressional oversight panel, Treasury “still does not know what the banks are doing with taxpayer money”:

The recent refusal of certain private financial institutions to provide any accounting of how they are using taxpayer money undermines public confidence. For Treasury to advance funds to these institutions without requiring more transparency further erodes the very confidence Treasury seeks to restore.

Last month an Associated Press report revealed that no bank receiving taxpayer funds is willing to report what it has done with the money, even though, as the oversight panel noted, “it is within Treasury’s authority to make such reports a condition of receiving funding.” Reportedly, banks are simply hoarding the money, eliminating any “bang” it might have had.

Every. Time. Every damned time I'm set to swat Obama for some damn fool move, like putting forward a stimulus stuffed with Con tax cuts, or he chooses somebody for his Cabinet that is, shall we say, less than stellar, and I prepare to unleash the Smack-o-Matic upon him, some absolute ass on the Right goes and does something so egregiously stupid that I have to triage, and the opportunity is missed.

At least I can be comforted by the knowledge that my annoyance with Obama is but a drop in the ocean compared to the downpour of angst coming from Greater Wingnuttia:

But if you think the left is unhappy, consider what the Republican base is thinking right now.

Congressional Republicans may have forged a fragile peace with President-elect Obama as he pushes his stimulus plan. But they face an insurgency on their right flank.

"You can sense a lot of frustration -- from listening to Rush Limbaugh to reading at RedState -- with Republican members of Congress being ready to fall all over themselves to help him," says Erick Erickson, editor of the conservative blog RedState.

And yet, the wingnuts are furious. Odd.

It's probably not that odd, actually. It's just that people in dire need of the best modern psychiatric medicine has to offer often do appear odd to nominally normal people.

On the toddler front, here's Norm Coleman throwing yet another tantrum:

Norm Coleman is complaining that the Senate's decision to close his offices after his term expired -- leaving the seat vacant while Coleman challenges the election results in court -- is hurting Minnesotans who have been relying on him for constituent services. "There are people -- this is real-life stuff -- who come to us for help," Coleman. "They're being hurt by Harry Reid." Meanwhile, Reid's office denies that they promised Coleman they would let his staffers keep working, though they are working to come to an acceptable solution.

Norm. Newsflash: there's a simple way to ensure your constituents still get the vital services they need. Fucking concede. You lost. Man up.

I think it's time for a dramatic reenactment of Norm Coleman's post-election shennanigans (h/t):

Does that remind you of anything else? Like, oh, say, the entire right wing?
Posted by Dana Hunter at 5:49 PM