Gaza: Writing Out a Will 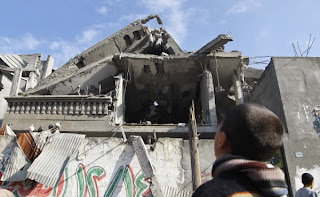 Will this Palestinian child be one of those who writes out a will?

In 1996, Israeli jets bombed a UN building where civilians had taken refuge at Cana/ Qana in south Lebanon, killing 102 persons; in the place where Jesus is said to have made water into wine, Israeli bombs wrought a different sort of transformation. In the distant, picturesque port of Hamburg, a young graduate student studying traditional architecture of Aleppo saw footage like this on the news [graphic]. He was consumed with anguish and the desire for revenge. As soon as operation Grapes of Wrath had begun the week before, he had written out a martyrdom will, indicating his willingness to die avenging the victims, killed in that operation--with airplanes and bombs that were a free gift from the United States. His name was Muhammad Atta. Five years later he piloted American Airlines 11 into the World Trade Center. . . .

On Tuesday, the Israeli military shelled a United Nations school to which terrified Gazans had fled for refuge, killing at least 42 persons and wounding 55, virtually all of them civilians, and many of them children. The Palestinian death toll rose to 660.

You wonder if someone somewhere is writing out a will today.

Nothing seems simpler to me than the equation than violence = more violence. Where can terrorism gain a foothold? Where there's no hope. When the worst of what you have been told to expect of your adversary turns out to be only a fraction of the reality you suddenly face. When you are given so many reasons to exact revenge that it becomes impossible to resist the call to do just that.

All of this would make far more sense if Israel's goal was to create more terrorists.

It's highly unlikely that Palestinians will be in any mood to forget the shelling of refugees in a UN school - something the Israeli Defense Force originally alleged was in response to militant activity "near to" the building (no-one said how near) and which had been met, confusingly by the IDF's own statements, by either return mortar fire or bombs or artillery shells depending upon which statement the pro-Israel lobby were taking as gospel at any time. Now, however, the UN says that senior IDF officials have admitted a mistake.

In briefings senior [Israel Defense Forces] officers conducted for foreign diplomats, they admitted the shelling to which IDF forces in Jabalya were responding did not originate from the school," Gunness said. "The IDF admitted in that briefing that the attack on the UN site was unintentional."

He noted that all the footage released by the IDF of militants firing from inside the school was from 2007 and not from the incident itself. "There are no up-to-date photos," Gunness said. "In 2007, we abandoned the site and only then did the militants take it over."

I wish I could say I was surprised Israel lied. But I've seen our own regime do it over and over and over again. Israel seems to have absorbed their lessons all too well. Why they didn't pay attention to the aftermath is something I may never understand.

In the meantime, the atrocities come relentlessly:

At least 30 people were killed in the Zeitoun district of Gaza after Israeli troops repeatedly shelled a house to which more than 100 Palestinians had been evacuated by the Israeli military, the UN said today.

The UN Office for the Coordination of Humanitarian Affairs (OCHA), said in a report it was "one of the gravest incidents since the beginning of operations" against Hamas militants in Gaza by the Israeli military on 27 December.

OCHA said the incident took place on 4 January, a day after Israel began its ground offensive in Gaza. According to testimonies gathered by the UN, Israeli soldiers evacuated about 110 Palestinians to a single-storey house in Zeitoun, south-east Gaza. The evacuees were instructed to stay indoors for their safety but 24 hours later the Israeli army shelled the house. About half the Palestinians sheltering in the house were children, OCHA said. The report also complains that the Israeli Defence Force prevented medical teams from entering the area to evacuate the wounded.

Around 7:00 A.M., an Israeli tank fired at our house. We decided to leave, and went to our neighbor, Hussein al-‘Aydi. A little while later, we heard that the army told people to leave the houses in the area, and we decided to go to another place. We left together with the neighbor’s family. Together, we were twenty-five persons.

When we went outside, we held up white cloth, so the soldiers would know we were civilians. We were afraid they would shoot us, but we walked anyway, having no alternative. Women and small children were in our group. When we got to a point opposite the tanks, they opened fire at us. My mother was hit and fell down. Then my sister Majda was hit in the back. Both were killed. We ran back, toward Hussein al-‘Ayadi’s house. Mother and Majda remained lying on the ground.

What can explain soldiers firing on women and children waving a white sheet? What can explain them herding civilians into buildings for their "safety," only to be bombed within a few hours? Possibly nothing. Possibly a military culture that has placed guns in the hands of young, inexperienced people without guidance from older, perhaps wiser and certainly more politically savvy officers. Possibly a military culture in which Arab lives are cheap (h/t):

In Beit Suhur outside Bethlehem, I have seen IDF troops shoot at Palestinian Christian women hanging out laundry in their gardens. This was done with tank coaxial machine guns from within a bermed up dirt fort a couple of hundred yards away, and evidently just for the fun of it. In Bethlehem a lieutenant told me that he would have had his men shoot me in the street during a demonstration that I happened to get caught in, but that he had not because he thought I might not be a Palestinian and that if I were not the incident would have caused him some trouble. I have seen a lot of things like that. One might say that in war, s--t happens. That is true, but such behavior is indicative of an army that is not well disciplined and not a completely reliably instrument of state policy. In my travels in the west Bank in March of 2008, it was noticeable that the behavior towards Palestinian civilians of IDF troops at roadblocks was reminiscent of that of any group of post-adolescents given guns and allowed to bully the helpless in order to look tough for each other.

They've faced no consequences for such behavior. Certainly not from the United States, who provided them a large fraction of their weaponry, and allows them to do whatever they wish with it, no matter how inhumane or ultimately self-defeating.

But there are harmonic tremors warning that a tectonic shift in attitude may be coming:

The House just approved its version of the praise-filled pro-Israel resolution approved yesterday in the Senate. And though I've yet to see a co-sponsor tally that would show any senator courageous enough to resist the lure of AIPAC, the stiffened-spine caucus in the House reached 26 members today: 4 who voted no and 22 voting "present" in a gesture of stoic disapproval.

Compare today's outcome to 2006, when the combined total of no and present votes was only 12, and we could be seeing a slow but welcome shift of the dialogue towards political leeway for lawmakers to criticize Israel.

We may finally be on the verge of providing the check that Israel needs. Criticism and demands that Israel start behaving better won't mean the friendship between our countries is over. Real friends don't blindly endorse every damn-fool, self-destructive thing you do. Real friends tell you when you're driving yourself off a cliff. Real friends ensure you get what you need:

The parties to the conflict aren't really in need of any brilliant new substantive ideas from the United States -- the basic shape of what an agreement would look like is well understood. Nor are our services as mediators really needed -- the Norwegians have proven capable of playing that role when asked, and no doubt others could do the same. What's needed is something that changes the Israeli domestic calculation -- a sense that the nature of the Israel-U.S. relationship will depend, in part, on the nature of Israeli policy vis-a-vis the Palestinians. Any administration willing to publicly chastise an Israeli government will inevitably wind up ruffling some feathers and taking political heat for it, but it will almost certainly be for the Israelis' own good. Jimmy Carter's tough-love approach didn't win him any fans among Israel's most strident supporters, but at the end of the day, the resulting Egypt-Israel peace treaty has been enormously beneficial to Israel.

Is there a path to peace? There could be. There is hope that, if the bombing is brought to an end and negotiations done right, there could be a better future for both the Israelis and the Palestinians. But some pride will have to be swallowed and attitudes changed:

What Israel should do now is work for a cease-fire on terms that allow both sides to save some face. It should then do something it has done far too little of in the past: improve Gazans’ living conditions significantly. The aim should be to construct a long-lived state of calm in which Hamas has more to lose by breaching the cease-fire than by sticking to it.

In the longer term Israel will have to accept that Hamas is no fringe movement that can be rooted out and destroyed, but a central part of Palestinian society. This will be the hard part, not least because of the opposition from Hamas’ secularist Palestinian rivals, Fatah.

But even though Hamas’s stated goal is Israel’s destruction, it has said many times that it would accept a truce extending decades. Some former Israeli security chiefs argue that such an accommodation - a peace treaty in all but name - would eventually oblige Hamas to accept Israel’s existence, or else lose its own base of support. It is a gamble, certainly. But the alternative is more innocent lives lost, more extremism and ultimately more trouble for Israel.

Listen to those security chiefs, Israel. Listen to those warnings. You're gaining nothing by killing children and women and old men. Let go of this insane idea that if enough bombs fall, you will somehow win.

There is no winning when you are inspiring another young man to write out a will.
Posted by Dana Hunter at 6:04 AM