Getting Acquainted with Agassiz
Parte the First: Introductions


Jean Louis Rodolphe Agassiz, Swiss geologist, paleontologist, and dear friend of famous American poets, has been a part of my life since childhood.  I'll tell you why in just a moment.  First, a few facts about the man, and then a guessing game.

Agassiz is world-famous for his work on glaciers.  He strode the ice of the Swiss Alps, the snowy Jura Mountains.  He visited mountains in the American West.  His world was white.

Now for the guess, and no clicking on the photo to cheat: which snowy mountain ridge is this?


Think you've got it?  Given up?  Follow me after the jump for the answer, and then we'll get to know Louis. 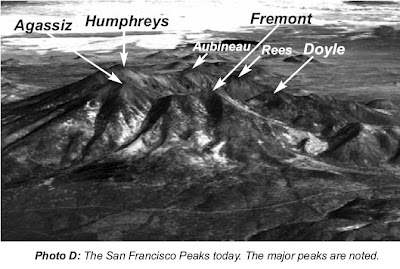 I told you Louis Agassiz has been with me since childhood.  He loomed large, you could say, framed in our sliding glass door.  He dominated my mountain town of Flagstaff, Arizona.  General Andrew Humphreys may have given his name to the highest point in Arizona, but Agassiz got the second highest, and by far the most beautiful.  That snowy ridge you see there is Agassiz Peak, named by General W.J. Palmer in honor of one of the greatest naturalists in history.

People tend to mistake Agassiz for Humpreys simply because they think that the most visible peak from town must be the highest.  But Agassiz throws Humphreys in its shadow, viewed from that angle, and that is a very apt metaphor indeed for the man himself.  Agassiz is everywhere, as Stephen Jay Gould noted in Time's Arrow, Time's Cycle:

My colleague Ed Lurie, distinguished scholar of Louis Agassiz, once told me that he had tried to escape Agassiz for years, and to branch into other areas of nineteenth-century American biology.  But he couldn't, for Agassiz loomed so large that his shadow extended everywhere.  Any exploration of any subfield in American biology became, at least in part, a study of Agassiz's influence.

Wait, you say - biology?  He dominated biology?  But I thought he was a geologist!  Well, I thought so, too.  After all, he's the man who realized that the world was once covered in ice, whose explorations of glacial features in far-flung corners of the world established that ice sheets had once covered continents.  He made his name by establishing that.  But he was a naturalist, and his work in paleontology, while not as famous, was just as important as anything he did geologically.

He came through my mountain town in 1867-1868 not because he was chasing glaciers - although Louis wouldn't have scoffed at the idea of hunting glaciers in a desert.  Not the man who once spent days scrambling around mountains rising from the Amazonian jungle, even climbing on the back of a hated horse to track down evidence of ancient ice.  "I have found traces of glaciers under this burning sky," he wrote to his mother.  "Imagine if you can, floating ice under the equator . . ."  He wouldn't have found it much of a stretch to imagine ice floating under a blazing Arizona sun.  But he was there for fossils, studying them for a railroad survey.

I don't doubt he took a few moments here and there to look for, and find, evidence of glaciation on the Peaks, although details of his trip West are hard to come by thus far.  We know what he would have seen if he did climb the Peaks: cirques converging on a central u-shaped valley in the Inner Basin, complete with moraines - evidence that the ice had once scoured these high desert mountains.  The Peaks were coated in ice during the Wisconsin Period, from 65,000 - 15,000 years ago, leaving them carved in classic alpine glacial style.  Louis, we can imagine, was quite satisfied to see it. 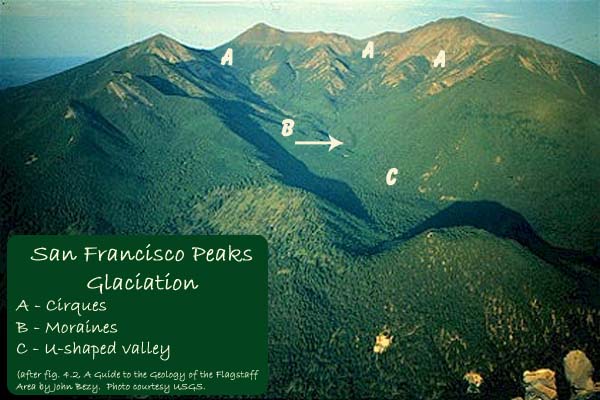 So, there was Louis looming over me, and as if the mountain wasn't enough, there's also a street in Flagstaff named for him.  He's connected to another great scientist who made his mark on Flagstaff, Percival Lowell: when Louis first landed in Boston, it was John Lowell, Jr., founder of the Lowell Institute and great-great grandfather of Percival, who befriended him - and Louis lectured often at the Lowell Institute.  Funny ol' world, innit?

I felt a fondness for the man before I ever knew who he was, simply because he had lent his name to a peak on the mountain I loved most, and because the name itself was beautiful, a touch exotic.  Let it roll off your tongue: agga-seize.  In a world full of Humphreys and Elden and Lowells, it was a hint of a wider world to come.

Alas, the second thing I learned about Louis after learning he was a world-renowned geologist was that he was a creationist.  Louis, Louis, Louis!  How could you?  I fell out of love.  I felt a little sorry for Agassiz Peak, named for a man who dissed Darwin.  How could a scientist with the vision to see ice at the equator have been so very, very blind?

How could a man with a desert tortoise (pdf), an Australian fish, and (likely) a whole genus of extinct Jurassic ammonites named for him, a man who dominated American biology, have been a bloody creationist, of all things?

Thanks to John McPhee's most wonderful Annals of the Former World, Stephen Jay Gould's Time's Arrow, Time's Cycle, and the intertoobz, I finally have an answer to that.  I've fallen in love with Louis once again.  And I shall be spending the next two editions of Sunday Sensational Science sharing that love with you lot.  You'll understand why Louis Agassiz loomed large enough to have mountains, lakes, towns, streets, glaciers, ice caps, and animals named for him.  You'll discover that he and Darwin had a lot in common.  You'll find out why Henry Wadsworth Longfellow was so very relieved when Agassiz approved of the following passage in Hyperion:

Ere long he reached the magnificent glacier of the Rhone; a frozen cataract, more than two thousand feet in height, and many miles broad at its base. It fills the whole valley between two mountains, running back to their summits. At the base it is arched, like a dome; and above, jagged and rough, and resembles a mass of gigantic crystals, of a pale emerald tint, mingled with white. A snowy crust covers its surface; but at every rent and crevice the pale green ice shines clear in the sun. Its shape is that of a glove, lying with the palm downwards, and the fingers crooked and close together. It is a gauntlet of ice, which, centuries ago, Winter, the King of these mountains, threw down in defiance to the Sun; and year by year the Sun strives in vain to lift it from the ground on the point of his glittering spear. A feeling of wonder and delight came over the soul of Flemming when he beheld it, and he shouted and cried aloud;

"How wonderful! how glorious!"


Indeed.  And how wonderful and glorious to have your purple prose about a glacier met with approval by the man who covered the world in ice?

So we'll learn many things about Louis, in the next few editions.  And you'll discover how I learned to love a creationist.
Posted by Dana Hunter at 4:20 PM