This is What I Abandoned You For

Look at this face.  Do you really think I could stay home and blog about idiot politicians with this face grinning in downtown Seattle? 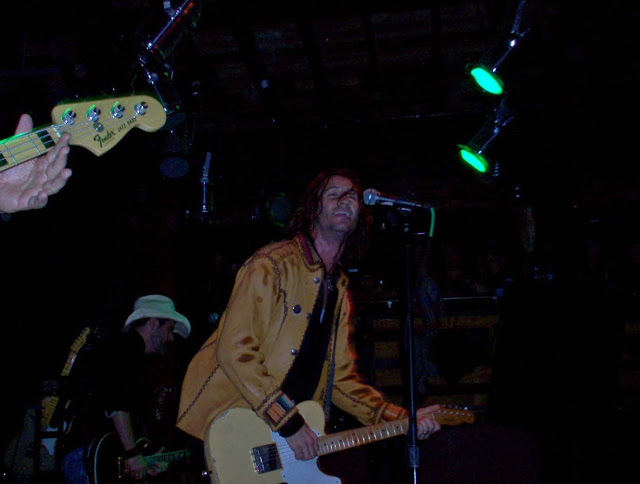 I haven't missed a single year with the Peacemakers since 2003.  It's not a show, it's an experience.  And I can't get that experience across in a blog post.  So here's what you've gotta do.  Go check out their tour dates.  They'll be in a city near you soon.  And I don't want to hear, "But Dana - I live in England!"  They're coming to England in February 2010.  They'll even be in Scotland.  You have no excuse.

Follow me after the jump for more concert pics, and a spirited attempt to get across the essence of what a Peacemakers show is, including shocking revelations!


Friday night, I collected my intrepid companion and a friend I shall call "Kali" to preserve her reputation among our other coworkers, and after Mexican food, we headed for the Crocodile Cafe in downtown Seattle.  Magic was in the air, my darlings - it actually stopped raining.  Behold the power of the Peacemakers: they can even stop Seattle's rainy season in its tracks.

And we got there early enough to install ourselves right at the stage.  This is key.  If you're going to a Peacemakers concert, don't hang back like a shrinking violet.  Grab a shot of good tequila and get yourself up close.  Roger requires shots.  This is a good way to introduce yourself. 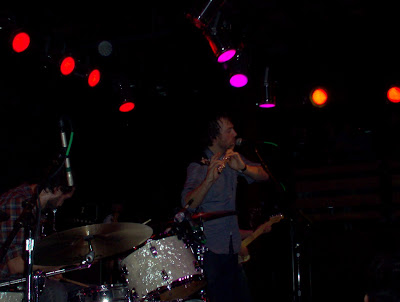 Massey Ferguson opened.  Now, most opening bands just sort of keep the stage warm while the late-comers trickle in, but Massey Ferguson puts on a hell of a show themselves.  And Ethan Anderson plays the flute.  The flute, people.  How can you not love a rock band whose lead singer plays the flute?

(You people who never liked Jethro Tull can just leave the cantina right now.  Flute + Rock = Awesome.  Especially the way Ethan plays, which doesn't sound like Jethro Tull at all.)

So no shit, there we were, not even inches away from the stage.  We met up with a gal from Tucson, Arizona who, like me, was a huge enough fan of the Peacemakers to come to their show alone since she hadn't been in Seattle long enough to meet other folks.  Yes, you can go to a Peacemakers show alone.  You'll meet plenty of friends.

I wish I could capture the experience in words.  It's impossible.  But we'll try some images, and a few words, and see where we get.

Whilst waiting for the Peacemakers, a group of us started comparing tats.  Yes, we are hardcore fans.  I didn't get a chance to get a photo - too busy showing ink - but here's a shot from Mexico: 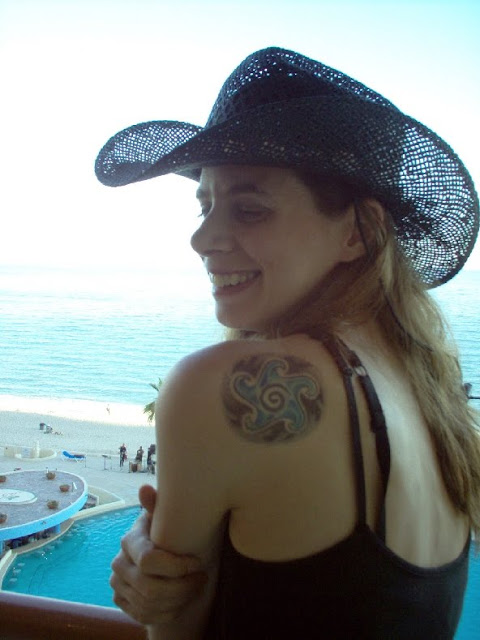 Now, mind you, before I became a Peacemakers fan, life was completely different.  I didn't own a black straw hat.  I'd never gotten up the guts to go to Mexico - hell, I'd only been as far out of the country as Vancouver, Canada, which doesn't really count.  I didn't like tequila.  And I sure as shit never intended to get a tattoo.  If someone had told me in, oh, say, 2002 that I'd enjoy all these things and the Peacemakers, too, I'd have proclaimed them insane.

Especially since (shocking revelation alert) I didn't even like the Peacemakers.  This is how I know I can't get the experience across in words, or even by playing bits of their music and showing you awesome pictures.  My dear friend Justin did these things when he became a Peacemakers fan.  He sat me down and patiently played a few songs.  He waxed enthusiastic over the ecstatic experience he'd had at their concerts.  He talked about Roger as if he were talking about a demigod.  And at the end of it all, I nodded politely and said, "They're all right, I guess, but it's really not my kind of music."

"You have to go to a show," Justin said.  "You won't understand until you've seen a show."

"Meh" wasn't in the vocabulary back then, but if it had been, I would've said it.  I'm not a huge consumer of live music.  I don't like being packed in with a bunch of sweaty drunken people listening to third-rate sound systems when I could be enthroned at home listening to studio albums and writing my arse off.  I enjoy the occasional show, but I'd never become a bigger fan of a band after seeing them live.  If I didn't like their studio recording, their live stuff wasn't going to be any better.  And there my opinion stood.  They were Justin's thing, not mine.

Justin, however, doesn't take "meh" equivalents for an answer.  And he spent the next several months working on his Plan.

He forced more of their music on me.  He evangelized.  And then one fateful day in April, he came to me and said, "Roger's going to be here.  He's touring solo.  And I don't have anybody to go with.  Would you please?"

He's a good liar.  And he's got puppy-dog eyes.  I caved.  I nearly killed him when I got to the bar and found David sitting there, which meant I wasn't the only person Justin had convinced to come with him, and I'd been had.  But he'd bought my ticket.  And he and David were talking about having Roger Clyne's babies.

David's gay.  Justin's not.  The fact that Justin and David were plotting together how to have another man's babies intrigued me.  I stayed despite being the victim of a con job.

Roger came on.  He played us songs.  He told us stories.  I was lucky enough to see him when they were writing Americano, and so was among the very first to hear "Switchblade."  I got to hear him introduce the entire band as if they were there, which is an amazing thing to see on a solo tour.  By the end of it, several things had been decided.  I was a die-hard Peacemakers fan, I was going to Mexico, and I'd be the surrogate mother for Justin and David so that we could all have Roger Clyne's babies.

I had my first shot of tequila that August at Nita's Hideaway in Tempe, AZ, in preparation for Circus Mexicus.  By the end of that year, I'd written a story based on the Peacemakers and that gorgeous Mexico show, and I proudly owned a straw hat.  When it came time to choose my tattoo, I knew there was only one piece of art I'd be proud to carry for the rest of my life: the Peacemakers' logo.

Yes, they're that good.

There are as many stories as there are concerts, but I've told you enough to perhaps convince you that this band is unique.  I've seen a lot of shows now, and I can tell you that no band puts on a show quite like this.  No one.

If you're already a fan, you know what I mean.  If not, grab a friend, catch a show, and have the time of your life.  But not before you've enjoyed the highlights from this show.

We were right at Nick Scropos's feet.  Nick has filled Danny White's bass-playing shoes, and then put on his own.  The man can play, my darlings, and what's more, he can play to an audience, which is a very different thing. 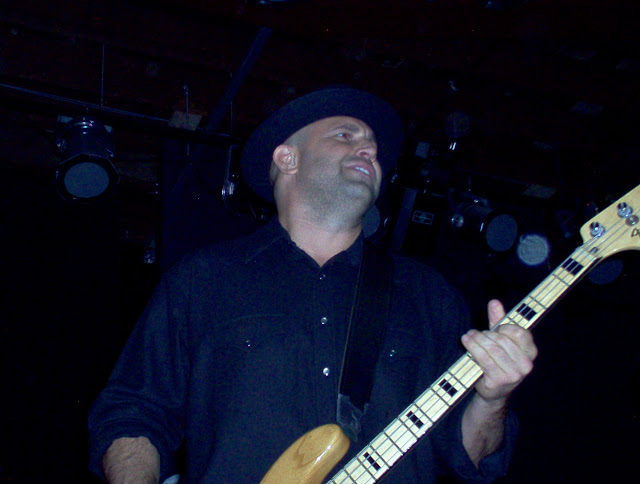 Isn't he beautiful?  Wait til you hear him play.

P.H. Naffah, poor man, is always stuck in the back with the drum set.  But we had a good view of him, too: 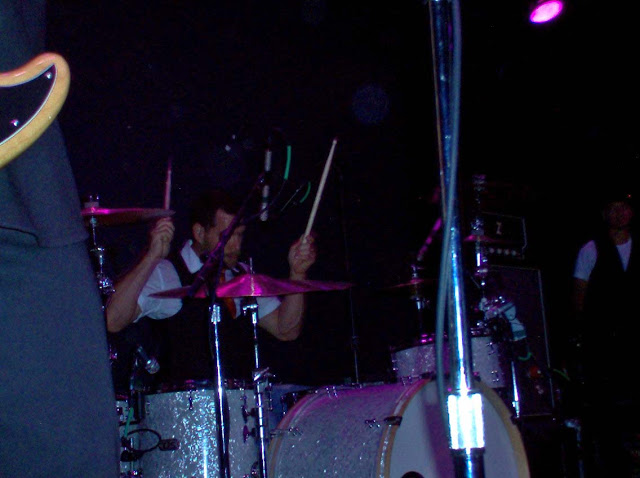 Look upon him, my darlings.  He, along with Roger, has been there from the beginning.  All hail the mighty P.H., and say unto him, "Grow the 'fro, bro!"  He'll know what you mean.

Stevie, alas, has left the band.  I miss Stevie more than I can say, but Jim Dalton's doing his best to fill the void: 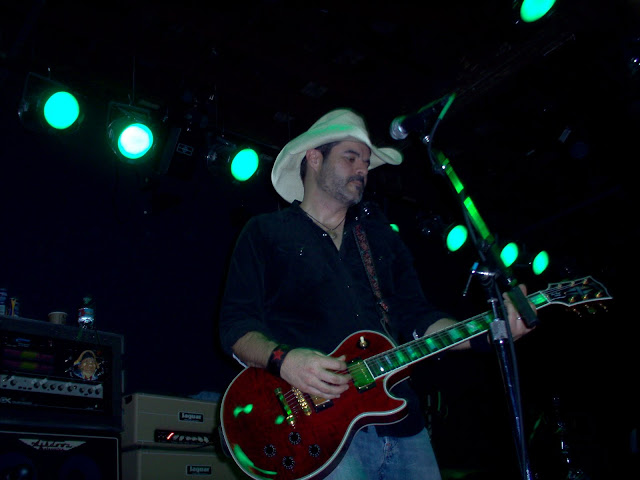 That's the thing about the Peacemakers: some of the faces may change, but the essence remains the same. 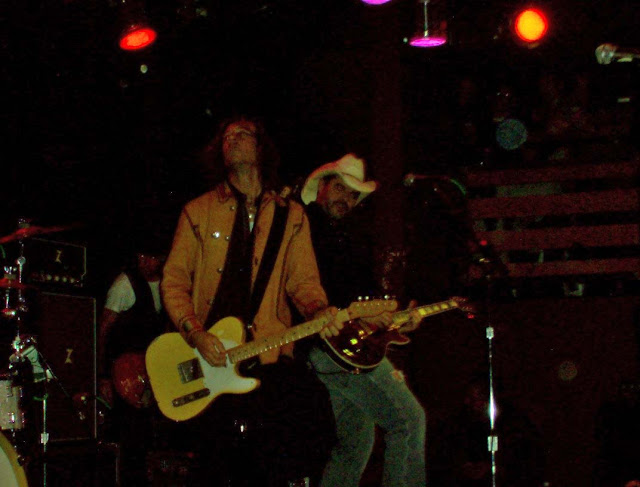 Yup.  The energy's still there.

And so is Jason Boots, who doesn't just sell the t-shits, but plays the trumpet: 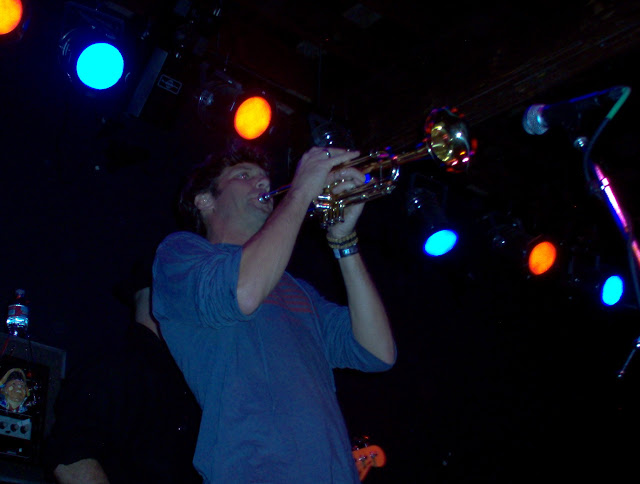 He's getting damned good at it, too.

Here's a photo that expresses what we all feel about Roger: 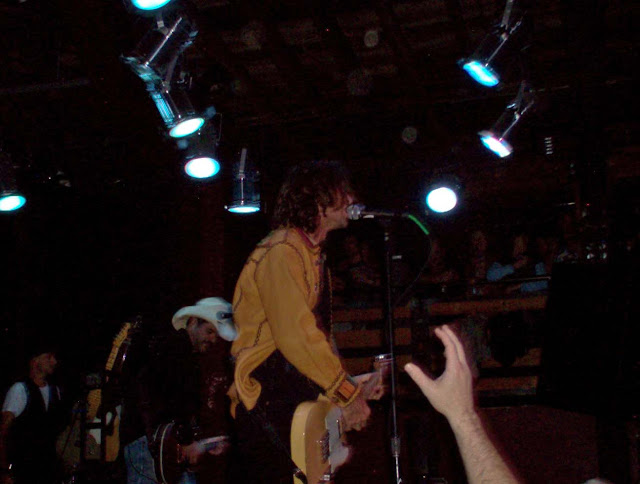 The nice thing about reaching out to Roger is that you won't have a bunch of security guards there pushing back, and when Roger gets through playing, he reaches back.  Awwww.... 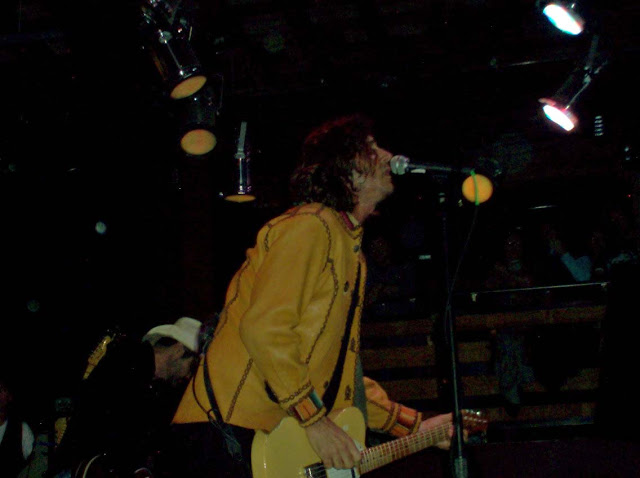 I'm not a marrying sort, my friends, but if a man with his personality, talent and looks wants to put me on a pedestal and write me songs like "Green and Dumb," I'll buy the damned ring myself.

We're lucky Alisa allows him to tour a country full of salivating females (and males!), and doesn't mind us drooling a bit.  That said, I think I shall applaud her choice by drooling a bit more: 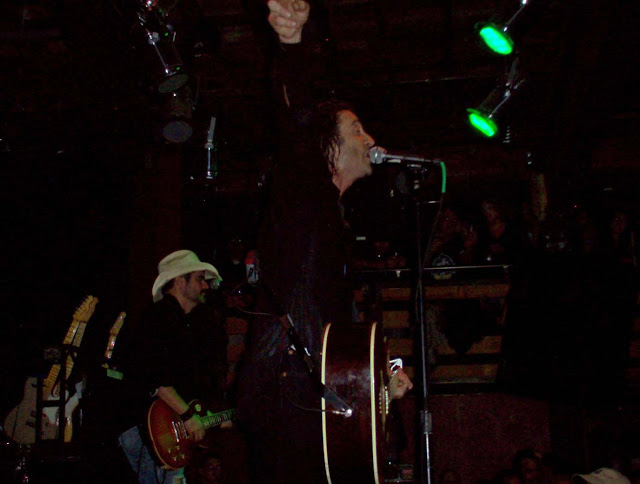 You might get the impression it's all about Roger.  But I have proof it's also all about Nick: 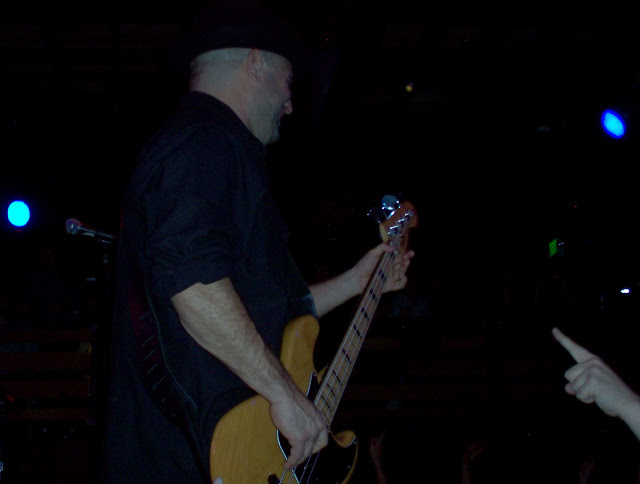 Ahem. Sorry.  Coulda knocked me over with a feather, you could.  Hardcore fans will understand why this is such a thrilling moment.  And speaking of fans, I'd just like to take this opportunity to give a shout-out to the fan who brought me the bit of the set list that had been separated from its brethren sometime during the show.  That was one of the sweetest gestures ever. 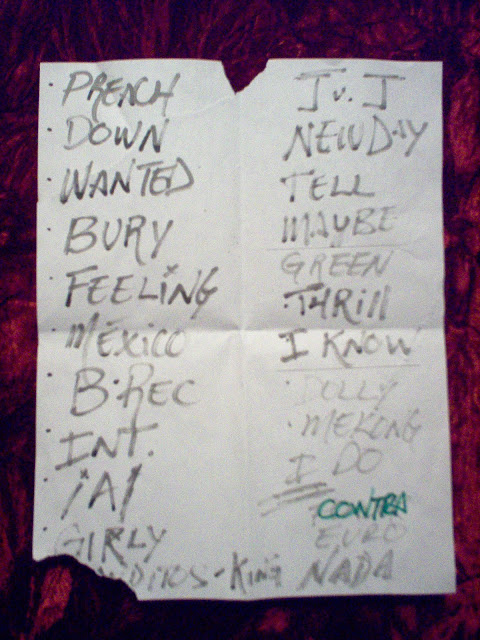 I'm putting it up here so that Ed Brayton can look upon it with utmost envy.  I hope he gets the opportunity to retaliate someday, perhaps with one of P.H.'s drumsticks.  Hee.

Roger came over at the end to apologize for not wearing my hat.  I'd held it out for him at one point, and he'd meant to come back for it but never got the chance.  S'okay.  For one thing, it was too hot for hats.  For the second, he's worn my hat before, and moreover let me wear his: 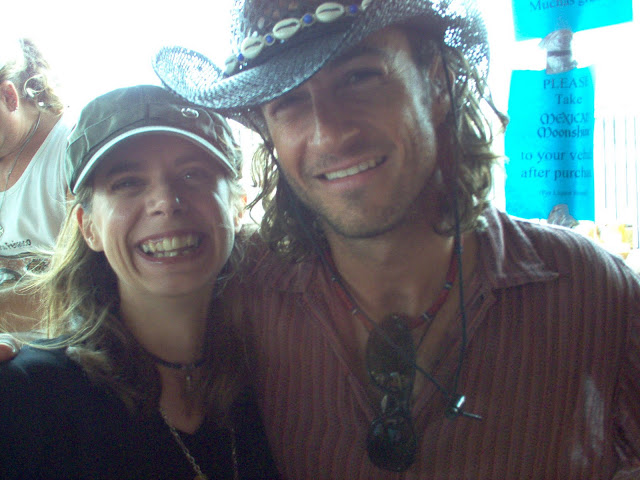 Roger, mi sombrero es tu sombrero, amigo.  Even when you don't get a chance to put it on.  And next time, I won't forget the Patron.

Lastly, I just want to congratulate Seattle.  When I first came here in 2007, the crowd was a little thin, and people couldn't count en español.  The crowd's gotten larger, there's more folks properly straw-hatted (although there's room for improvement there) and everybody's roaring out ¡uno dos tres quatro! like pros.  Now all that's left is for everybody to learn how to call for the encore.  Remember, my darling denizens of Seattle: when the Peacemakers walk off the stage, we wait a minute, and then start chanting ¡uno mas! ¡uno mas! until they return.  Do that, and you will be able to give the Arizona fans a run for their money.  Nothing would make me prouder.

And that, my darlings, is what I abandoned you for.  Do you forgive me now?
Posted by Dana Hunter at 4:37 PM

Email ThisBlogThis!Share to TwitterShare to FacebookShare to Pinterest
Labels: roger clyne and the peacemakers

There's always forgiveness when someone chooses to engage in awesome.