Hey, John Pieret! I Am Too a Philosopher!

Just over a week ago, when we were all having our way with Ken Ham, John Pieret at Thoughts in a Haystack said this:

John Wilkins has, coincidentally (or perhaps not), just posted an excellent meditation on the claim that God is necessary for morality,
"The evolution of morality." Dana, in the more direct language of the non-philosopher has made much the same points.

Now, I have to admit I felt a bit put-upon. Not a philosopher? Am too a philosopher! After all, I'm an American who thinks - that's practically Plato right there! I've got at least a plausible claim of being a street philosopher, don't I?
Apparently, I do: 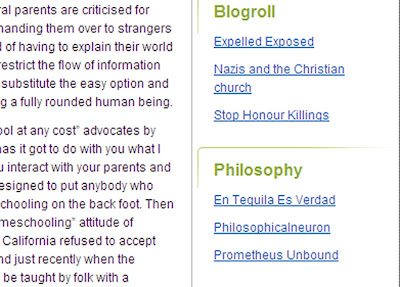 And I'll have you know there's a section for Politix, which I could have ended up in. But I didn't. Not Politix. Imma Philosophy. So there.
The above screen shot comes from a site called Voice From The Pack. Aside from an exquisite taste in philosophy, the blog boasts a masterful spanking of Denyse O'Leary. And, by way of a change from the blogs I normally read, there's some good bits on climate change as well. Not that the rest of us don't care about global warming and the silly fuckers who deny it, but we're so busy paddling the never-ending parade of media dumbshits, Constitution-shredding politicians, and IDiots that we don't spank the global warming skeptics quite as much as we might like.
And did I mention that Harebell has excellent taste in philosophy?
*Of course you know I'm not seriously upset with John. I even agreed with him - but hell if I was going to pass up a chance like this!
Posted by Dana Hunter at 2:16 AM

You are welcome o wise one and thanks for the kind words.
I first started looking at your blog after connecting from the "elitist bastards" site.
Definitely a trait of every serious philosopher, elitism that is.

I did hesitate when I wrote that, wondering if I might offend. The intent, however, was to make a distinction between the language of professional philosophers and us non-professionals (non-professional-philosophers seemed a little klunky) who speak regular 'Merikan.

There ain't nobody in my blogroll who I don't consider a philosopher.

Now excuse me while I go watch Harebell play wack-a-mole with Denyse (accent on the "Deny") O'Bleary.

I wonder if Denyse ever tried to apply the same logic, and I use that term loosely, to her religious text. If it's quite clearly impossible for the sun to stop moving, as it is supposed to have in one Biblical story, that means that this particular story is nonsense. Doesn't that make it doubtful that the rest of the Bible is anything but bunk? Is it any wonder there are atheists?

Somehow, I doubt that she's considered that possibility.