Al Gore issued America a challenge on global warming that left me stunned: A Generational Challenge to Repower America. No other political speech has ever galvanized me like this. We're used to hearing scientists sound the alarm and tell the world it needs to act now to stop the slide into climate chaos. No one else has ever come out with such force to say we can.

We have the science. We have the technology. We have the need. All that we need now is the will, and Gore's speech has the power to give us that. He takes something enormous and makes it seem almost simple.

So I'm handing Sunday Sensational Science over to him. I've excerpted key points from his speech, and I hope you send this to friends, family, coworkers, and politicians. They need to hear that clean energy and freedom from fossil fuels is possible. Not in 50 years, or 30, or 20, but in 10.

Global warming is real. But even if you don't believe that, there are other critical reasons why we should still work together to make clean energy our immediate future.

I don't remember a time in our country when so many things seemed to be going so wrong simultaneously. Our economy is in terrible shape and getting worse, gasoline prices are increasing dramatically, and so are electricity rates. Jobs are being outsourced. Home mortgages are in trouble. Banks, automobile companies and other institutions we depend upon are under growing pressure. Distinguished senior business leaders are telling us that this is just the beginning unless we find the courage to make some major changes quickly.

The climate crisis, in particular, is getting a lot worse - much more quickly than predicted. Scientists with access to data from Navy submarines traversing underneath the North polar ice cap have warned that there is now a 75 percent chance that within five years the entire ice cap will completely disappear during the summer months. This will further increase the melting pressure on Greenland. According to experts, the Jakobshavn glacier, one of Greenland's largest, is moving at a faster rate than ever before, losing 20 million tons of ice every day, equivalent to the amount of water used every year by the residents of New York City. 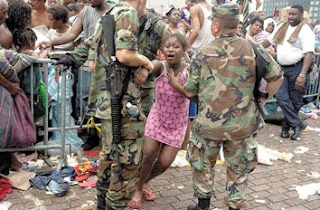 Two major studies from military intelligence experts have warned our leaders about the dangerous national security implications of the climate crisis, including the possibility of hundreds of millions of climate refugees estabilizing nations around the world.

Just two days ago, 27 senior statesmen and retired military leaders warned of the national security threat from an "energy tsunami" that would be triggered by a loss of our access to foreign oil.

And by the way, our weather sure is getting strange, isn't it? There seem to be more tornadoes than in living memory, longer droughts, bigger downpours and record floods. Unprecedented fires are burning in California and elsewhere in the American West. Higher temperatures lead to drier vegetation that makes kindling for mega-fires of the kind that have been raging in Canada, Greece, Russia, China, South America, Australia and Africa. Scientists in the Department of Geophysics and Planetary Science at Tel Aviv University tell us that for every one degree increase in temperature, lightning strikes will go up another 10 percent. And it is lightning, after all, that is principally responsible for igniting the conflagration in California today.

I'm convinced that one reason we've seemed paralyzed in the face of these crises is our tendency to offer old solutions to each crisis separately - without taking the others into account. And these outdated proposals have not only been ineffective - they almost always make the other crises even worse.

Yet when we look at all three of these seemingly intractable challenges at the same time, we can see the common thread running through them, deeply ironic in its simplicity: our dangerous over-reliance on carbon-based fuels is at the core of all three of these challenges - the economic, environmental and national security crises.

But if we grab hold of that common thread and pull it hard, all of these complex problems begin to unravel and we will find that we're holding the answer to all of them right in our hand. The answer is to end our reliance on carbon-based fuels...

What if we could use fuels that are not expensive, don't cause pollution and are abundantly available right here at home?

We have such fuels. Scientists have confirmed that enough solar energy falls on the surface of the earth every 40 minutes to meet 100 percent of the entire world's energy needs for a full year. Tapping just a small portion of this solar energy could provide all of the electricity America uses.

And enough wind power blows through the Midwest corridor every day to also meet 100 percent of US electricity demand. Geothermal energy, similarly, is capable of providing enormous supplies of electricity for America.

Today I challenge our nation to commit to producing 100 percent of our electricity from renewable energy and truly clean carbon-free sources within 10 years.

This goal is achievable, affordable and transformative. It represents a challenge to all Americans - in every walk of life: to our political leaders, entrepreneurs, innovators, engineers, and to every citizen....

To those who argue that we do not yet have the technology to accomplish these results with renewable energy: I ask them to come with me to meet the entrepreneurs who will drive this revolution. I've seen what they are doing and I have no doubt that we can meet this challenge.

When we send money to foreign countries to buy nearly 70 percent of the oil we use every day, they build new skyscrapers and we lose jobs. When we spend that money building solar arrays and windmills, we build competitive industries and gain jobs here at home.

Of course there are those who will tell us this can't be done. Some of the voices we hear are the defenders of the status quo - the ones with a vested interest in perpetuating the current system, no matter how high a price the rest of us will have to pay. But even those who reap the profits of the carbon age have to recognize the inevitability of its demise. As one OPEC oil minister observed, "The Stone Age didn't end because of a shortage of stones."

To those who say 10 years is not enough time, I respectfully ask them to consider what the world's scientists are telling us about the risks we face if we don't act in 10 years. The leading experts predict that we have less than 10 years to make dramatic changes in our global warming pollution lest we lose our ability to ever recover
from this environmental crisis. When the use of oil and coal goes up, pollution goes up. When the use of solar, wind and geothermal increases, pollution comes down.

When President John F. Kennedy challenged our nation to land a man on the moon and bring him back safely in 10 years, many people doubted we could accomplish that goal. But 8 years and 2 months later, Neil Armstrong and Buzz Aldrin walked on the surface of the moon.

To be sure, reaching the goal of 100 percent renewable and truly clean electricity within 10 years will require us to overcome many obstacles. At present, for example, we do not have a unified national grid that is sufficiently advanced to link the areas where the sun shines and the wind blows to the cities in the East and the West that need the electricity. Our national electric grid is critical infrastructure, as vital to the health and security of our economy as our highways and telecommunication networks. Today, our grids are antiquated, fragile, and vulnerable to cascading failure. Power outages and defects in the current grid system cost US businesses more than $120 billion dollars a year. It has to be upgraded anyway.

Of course the greatest obstacle to meeting the challenge of 100 percent renewable electricity in 10 years may be the deep dysfunction of our politics and our self-governing system as it exists today. In recent years, our politics has tended toward incremental proposals made up of small policies designed to avoid offending special interests, alternating with occasional baby steps in the right direction. Our democracy has become sclerotic at a time when these crises require boldness.

It is only a truly dysfunctional system that would buy into the perverse logic that the short-term answer to high gasoline prices is drilling for more oil ten years from now.

We are on the eve of a presidential election. We are in the midst of an international climate treaty process that will conclude its work before the end of the first year of the new president's term. It is a great error to say that the United States must wait for others to join us in this matter. In fact, we must move first, because that is the key to getting others to follow; and because moving first is in our own national interest.

So I ask you to join with me to call on every candidate, at every level, to accept this challenge - for America to be running on 100 percent zero-carbon electricity in 10 years. It's time for us to move beyond empty rhetoric. We need to act now.

This is a generational moment. A moment when we decide our own path and our collective fate. I'm asking you - each of you - to join me and build this future. Please join the WE campaign at wecansolveit.org. We need you. And we need you now. We're committed to changing not just light bulbs, but laws. And laws will only change with leadership.

We must now lift our nation to reach another goal that will change history. Our entire civilization depends upon us now embarking on a new journey of exploration and discovery. Our success depends on our willingness as a people to undertake this journey and to complete it within 10 years. Once again, we have an opportunity to take a giant leap for humankind.

I'm not an economist, but I think moving to renewable forms of energy, particularly those we can manufacture here, is the key to revitalizing our economy. There are many reasons for our current doldrums - a lousy educational system being the most pressing one, but the cost of energy is becoming exhorbitant, and we will now have to compete with the economies of Europe, India, and China to obtain it.

There's nothing to prevent most parts of the country from becoming largely self-sufficient for electricity from renewables. There's wind everywhere, and sun most places. There's warmth in the ground. These are all things that can be used to either generate electricity, or replace electrical energy and fossil fuel use. For those regions that can't manage, fossil fuel use will at least be reduced considerably.

I don't know if it's practical to replace all of our electrical generating capacity in a decade, but it's certainly possible to get a good start on it.