They got pwnd on everything else. It was only a matter of time before the incredible, beautiful complexity of flowers turned out to be - gasp! - far from irreducible.

It turns out that this intricate dance between pollinator and pollen-producer was choreographed long, long ago, in fits and starts, by none other than our good friend evolution. I'm sure you're all astonished by this. Why don't you spend a moment relaxing with this study of butterfly on flower while your heart recovers from the jolt. Then we'll get into the details.

Christopher Taylor at Catalogue of Organisms introduces us to some of the earliest flowers, and teaches an IDiot troll that when scientists say things like "sudden explosion of flowering plants," what they really mean is, "sudden on a geological timescale, which isn't very sudden at all." To do this, he introduces some precursors like our good friend Bennettitales here:

"What Bennettitales did have, however, were flowers (of a sort). The leaves of the strobilus were expanded into flower-like bracts that were quite large (and possibly quite colourful) in a number of taxa. Certain features of the bennettitalean bracts suggest that they had a role in attracting insect pollinators, just as modern flowers do today (Gottsberger, 1988). The largest bennettitalean "flowers" were found in Cycadeoidea, which had the bracts recurved to enclose a central chamber containing the reproductive organs. This is of great significance because similar arrangements are found in modern beetle-pollinated flowers, which are believed to be among the more basal flower forms."

Total shock to the system, innit? Imagine a flowering plant evolving, of all things. And not even evolving for simple human pleasure, but because the selfish buggers wanted to attract beetles. They had no idea Buddhists would come by millions of years later needing an inspiration for the Lotus Sutra.

When you get right down to it, flowers are very Buddhist. They don't have wants and desires. They just go with the flow. The ones that successfully attract various pollinating insects end up evolving fantastic variations of petals, color, and scent, but there's no intention there. Doesn't have to be. Things just take care of themselves.

"The earliest major pollinators of flowers were probably beetles and flies (Kevan & Baker, 1983). Beetles in particular are the major pollinators of members of basal angiosperm orders such as Magnoliales and Nymphaeales. The two insect groups most commonly associated with pollination in most peoples minds, butterflies and bees, were unlikely to have been significant players in the origin of flowers for the simple reason that neither had come into existence yet - Lepidoptera as a whole only started making an appearance during the Cretaceous, while bees were not to appear until the Tertiary. As already noted, many of the basal angiosperm groups show adaptations towards beetle pollination (this is why magnolias, for instance, produce such a powerful perfume and white flowers - nocturnal beetles use smell more in finding food, while white stands out more at night than colour would). Many beetle-pollinated flowers have some sort of enclosed chamber, or close during the day, providing their pollinators with a safe haven from predators as well as providing food in the form of nectar or pollen..."

Sometimes, nature really does nurture. And I'm sure this kind of unintentional symbiotic relationship makes the IDiots scream for joy, because they just can't seem to wrap their heads around the fact that the result can drive the cause. We don't yet know all of the details of how plants went from no flowers to full bloom, but we can definitely understand that early mutations causing flower-like forms to appear would be encouraged to elaborate as the whole beetle-flower relationship developed. Plants that had "flowers" thrived, those lacking them didn't. Plants with better flowers spread more pollen via their beetle vectors. Plants with inferior flowers didn't. Beetles that figured out how to hide in flowers survived while those who stayed outside got munched. Give that a few million years, and you've got flowers everywhere, along with insects who know how to take advantage of them. 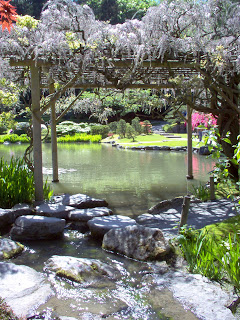 But that's not half as strong an argument as this simple proof:

"Insect-attracting strobili such as found in Bennettitales could have quite easily given rise to the first flowers. Developmental genetics has confirmed the theory put forward many years previously that petals and sepals represent modified leaves, and by affecting the expression of the genes involved it has proved possible to make leaves grow instead of petals, and petals grow instead of leaves (Goto et al., 2001). "

This is why I love genetics so. Isn't that exquisite proof that evolution didn't need to come up with major modifications to create something brand new? All evolution needs is a chance to modify what's already there. It's almost as gorgeous as wisteria blooming in Seattle.

All right. It's just as gorgeous. You just can't stick it in a vase is all.
Posted by Dana Hunter at 4:06 AM

I've noticed that the harder it is to find a gap to shove god into, the more pronounced becomes the denial and delusional behavior. Proof does not seem to matter to these scam artists. Wishful thinking on the part of their victims conquers all.

One of things that I've always found humorous is that the people who talk about things like irreducible complexity and intelligent design seem to have no idea how designs actually happen. I'd recommend that they watch James Burke's Connections, but I'm sure they're already familiar with it and it's missing key links or violates the laws of thermodynamics or something.