The Real Curse in the White House

I shouldn't be surprised in the least by the outrageously stupid things theocons say. But Ed Brayton reports on one who has just climbed an Olympus Mons of batshit insanity:

Joseph Grant Swank, a past winner of the Robert O'Brien Trophy, has an amusing article where he declares that the White House is now under a curse. Why? Read for yourself:

For instance, I believe there presently is a divine curse on the White House. Why? Because President George W. Bush placed the Koran in that house's library. The occasion was a much-celebrated Ramadan dinner where both Muslim males and females were guests.

Uh oh. There's a "curse" in the White House. Someone has put a hex on the country, perhaps even gave us all the Evil Eye.

Gee. I wonder who that could be? 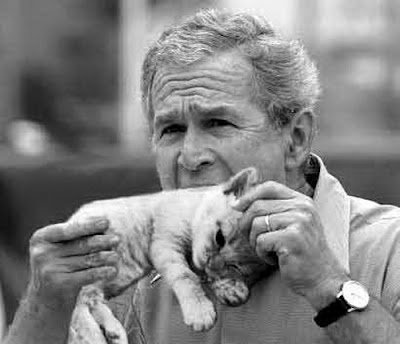 Seriously. You don't need a jealous tantrum-thrower of a god getting miffed at the Koran to explain why the White House appears to be under a curse. You just need to look into the eyes of the dillweed playing spoiled rich brat in the Oval Office to know that yes, the White House certainly is under a curse. No God did it. The little fucker stole two elections to get there.
And there's a few problems with Swank's theory:
1. It's utterly fucking inane.
2. I've had the Koran and the Bible inhabiting the same shelf for a decade. Aside from Bush, it's been remarkably free of curses.
3. The Koran is a book, not a god. I know this is difficult for mentally challenged people like Swank to understand, but I do wish he'd try.
4. And lastly, Allah is God, you raging fuckwit. God would be putting a curse on the White House because he's jealous of himself.
Which, from what I've seen of the right-wing idea of God, wouldn't really surprise me. If ever there was a deity who needed Prozac....
Posted by Dana Hunter at 2:22 AM

It's nice to see more people in the world embrace the truth of polytheism.

If one were to place "another god" beside your god, that would mean that another god would exist.

I think that polytheism is the answer because you are only safe if you cover _all_ your bases. There are a lot of world religions. Start your own collection today.

Also, I'd argue that Bush's bookshelf should be doubly safe because he has two gods looking out for it not one.

I knew the fucker was a paranoid-schitzophrenic, but he's got MPD going on too? "Place no other gods before me, not even me..."

That picture freaked the crap out of me.