These numbers scare me: 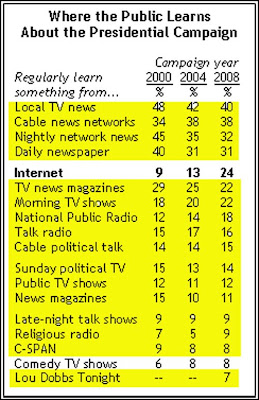 Note the vast sea of yellow. That's mainstream media (with a gratuitous helping of religious radio and Lou Dobbs thrown in). The two lonely islands of white are where people are more likely to get factual news: the internet (a few areas of it) and Comedy TV shows (Stewart and Colbert: the best news sources around).

I never thought I would see the day in America when comedy shows would present better political analyses than the major news shows.

We turn now to Media Matters, and the reason why these numbers terrify me so:

Let's pause for a moment to review. According to the news media, if you call John McCain a "hero," but say that heroism doesn't qualify him to be president, you have dishonorably attacked his military service. (Feel free, however, to say the same thing about John Kerry.) And if you criticize McCain's Iraq policies, you are participating in "an organized campaign against John McCain's military service."

The media's knee-jerk defense of McCain doesn't stop at their use of his military service to rule criticism of his Iraq policies out of bounds. It extends to (things having nothing to do with) his age, too. See, if you criticize John McCain for ignoring his own pledge to avoid negative campaigning, the media will quickly announce that you're really attacking his age. That was ridiculous, of course, but McCain aide Mark Salter told them to say it, so they did.

You get the picture: the media is on the verge of declaring any criticism of John McCain off-limits -- even when it isn't really criticism. Even when you call him a "hero," but not quite enthusiastically enough.

The vast majority of Americans are getting their news from these utter fuckwits. Do you see now why I'm terrified?

As always, there's more where that comes from:

John Kerry appeared on CBS’s “Face the Nation” yesterday, and did a fine job as an Obama campaign surrogate. In fact, I’d go so far as to say he was pretty darn good — he dominated the discussion, hit all the high notes, and generally did exactly what the Obama campaign hoped he’d do. But then, there was, once again, the media’s reaction.

Fast forward to about the 7:40 mark, and you’ll hear, after an entirely substantive critique from Kerry on McCain, “Face the Nation” host asked Bob Schieffer asked Kerry incredulously, “Are you now challenging John McCain’s integrity?”

John Cole said he “threw the remote.” I can’t say I blame him, though my response was more towards burying my face in my hands, grief-stricken over the realization that McCain’s media “base” is royally screwing up coverage of yet another presidential campaign.

I think both Cole's and Carpetbagger's reactions show admirable restraint. My reaction runs to wanting to throw the entire Beltway press corps into prison for fraud. And it only gets worse:

Just as absurd was the AP’s article about Kerry’s criticism. The first two sentences read, “John Kerry says Republican John McCain doesn’t have the judgment to be president. If that’s the case, then it’s probably a good thing McCain rejected overtures from Kerry, the Democratic presidential nominee in 2004, to form a bipartisan ticket and run with Kerry as his candidate for vice president.”

Got that? The media still wants to attack Kerry as some kind of flip-flopper. The most important aspect of Kerry’s interview — the part that the AP put at the very top of its article — was that there were rumors four years ago about McCain joining the Democratic ticket.

And as it turns out, the AP appears to have screwed this up, too.

What a fucking shock.

If the press corps were doctors, most of them would have had their licenses revoked for malpractice by now. They've happily allowed themselves to become the vehicle by which the neocons spread their lies, invective, and hate. They've forgotten how to report anything aside from what their handlers tell them. They've completely bought into the Republicon myth that Dems are always wrong and Rethugs always right. And this is the bunch of lying fuckwits that America turns to for its "news."

America's mainstream media: ensuring Americans are well-equipped to make the worst possible choices in 2008. Keeping Americans ill-informed is their mission. They should ask Bush if they can borrow his "MISSION ACCOMPLISHED" banner.


*Due to CBS's incredibly retarded embedding, which apparently doesn't close the HTML tags, coupled with Blogger's amazing ability to point out problems without offering solutions and my pig-ignorance on the subject of code, I had to substitute a clip from YouTube for the original from Carpetbagger's post. They're the same. Unlike the media, I fact check.
Posted by Dana Hunter at 2:27 AM

Actually I don't read any news at all. If I want to know about an event, I usually read a book on the topic. I'm not usually that interested in current events.

I think that the main issue is that people don't know how to think.

For example, words like honor can mean a lot of things to a lot of people. Basically, I just ask this, is it correct or incorrect? Honor/dishonor/patriotism/traitor/terrosist
mean nothing. They have no real meaning what so ever. They are emotional cues to get people to feel a certain way. Strip these away, and there's no content to the "news."

Read a Roman history book--pick one-- and you'll see that there's nothing _new_.

My blood pressure went up just reading about how shitty the news is. Actually watching it would probably put me in a cardiac clinic.

This just emphasizes what I was saying earlier about our "national nervous system" being taken over by the neocons (Borg, Drakh, Sauron, Big Brother -- pick your metaphor; fear of this kind of thing runs deep in the free-thinking, anti-authoritarian SF/F world, and for good reason).

I've been thinking of writing a book about rational thinking. My tentative title: Spot The Loonie: How to Tell The Difference Between Sweet Reason and Utter Insanity, From Quite a Long Way Away.

Every time I start writing it in my head, though, it comes out like a sort of anti-Jack-Chick tract...

...but hey, maybe that would be a good way to promote it! Put a series of JC-style tracts online, freely redistributable, with a promotional link for the book at the end of each one. Encourage people to print them out and stick them on bulletin boards, lampposts...

Oh, and more on what leroy said -- this is precisely why I've been trying to reclaim those words (e.g. patriotism, terrorism, dissent=disloyalty, American dishonor) as time permits. Comments and suggestions welcome...

If the news organizations were honest, Obama would be a shoe in.