So This is What Passes for "Science"

As most of my regulars know by now, I've been enjoying have sole custody of my teevee. And it's been nice - lots o' pretty pictures, some interesting stuff, and I get to catch up on Batman: the Animated Series.

They call this shit "science"?

I haven't been keeping a list of all the science errors, because frankly I don't have that kind of spare time, and I'd have to expand the memory on my computer. But let's just take a few pertinent examples.

On Discover Magazine, they dedicated a whole episode to the discovery of a Homo sapiens skeleton that showed some traits usually associated with the Neanderthal - heavy brow ridge, shorter legs, heavier body. It was dated to several thousand years after the Neanderthal died out. Here's their conclusion in a nutshell: one set of bones that sorta resemble a Neanderthal a little bit = ZOMG HUMANS AND NEANDERTHALS HYBRIDIZED!!! Seriously. They ended the episode by baldly stating this as a fact.

One small problem: never happened. In fact, in one of those delightful examples of synchronicity, I came across this unequivocal debunking in Endless Forms Most Beautiful just a few hours after watching the episode:

H. neanderthalensis did not contribute to the H. sapiens gene pool. This was demonstrated conclusively in a remarkable study, one of the really great contributions of genetics to paleoanthropology.Svante Paabo and his colleagues, then at the University of Munich, managed to sequence DNA extracted from a bone of a Neanderthal specimen, and this sequence proved that Neanderthals are a dead twig on the human evolutionary tree.

The only people who now believe that Neanderthal-human hybrids exist are Discover Magazine and the Young-Earth Creationists. So much for that.

In another example of synchronicity, I'm currently reading Life by Richard Fortey, wherein I'm reminded of the whackaloon theories of the origin of life proposed by steady-staters:

At this meeting, Professor Hans Phlug was to announce direct evidence of life from meteorites - and from te oldest (if somewhat altered) sedimentary rocks from Isua, Greenland. Phlug's host was Professor Wickramasinghe, professor of mathematical astronomy at the Univerity of Wales in Cardiff. "Wickram" is himself a protoge of Sir Fred Hoyle, who had a long and mostly distinguished career as an astronomer, and a second one as a science fiction writer.... But the real business of the meeting was a lecure detailing alleged evidence of extraterrestrial life - including spheres from carbonaceous chondrites, which were, it was claimed, obviously organic. Bacteria came direct from outer space! Life, far from being a singular phenomenon and Earth-bound, the product of our position in the solar system and all the rest, was reported to be almost commonplace - distributed through the Universe and dusted through the stars. Life could be seeded here and there as chance ordained: comets which passed close to planets, including our own, were a favoured source for this cosmic interaction with the terrestrial world.

This notion of "Panspermia" has had a long tradition, and this was its latest incarnation. The subtext was that the Universe had a constant diameter, the "steady state" theory, as opposed to the expanding Universe proposed under the "big bang" - the theory which gained ascendancy in the latter half of the twentieth century....

Needless to say, the steady state theory is dead, Jim, and reports of life in meteorites is problematic at best. Richard Fortey went on to give Hoyle a thorough yet genteel spanking, rather too long to reproduce here (as the entire book is pretty much the debunk). Wickram and Hoyle have about zero credibility when it comes to origin of life theories. Yet what do I find in Naked Science's "Birth of Life" episode? Whackaloon theories of the origin of life courtesy of none other than Wickram himself. Puh-leeze.

There's some good science out there, mind. Watching these programs is a fine compliment to science reading, as long as you watch out for the misinformation salted through them. And the visuals are truly stunning. Those wonderful images have been a great help in my reading. It would just be a lot nicer if they actually got the science right more often.

Oh, and as for Batman.... Look, I know it's a cartoon. And I know there's no chance of such a creature as a Man-bat. But for fuck's sake, how hard would it have been for the animators to notice that actual bats have their wings attached to their ankles and draw accordingly? Help out my willing suspension of disbelief, here! 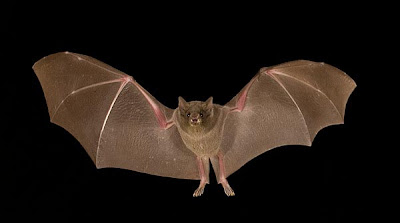 Also, if someone went through a shapeshifting episode that destroyed their shirt... why the hell are their pants still on?
Posted by Dana Hunter at 2:19 AM

Wait... a man-bat has to be morphologically the same as a regular bat? Then his pants would come off in the shape-shifting scene! This would make the animator's job much more difficult.

Surely you are aware that like the Hulk, all shape-shifting humanoids must keep their pants on.

It's because nobody loves the irregular furry penis.

actual bats have their wings attached to their ankles

One of the taxonomic differences between men and bats is that we don't have wings attached to our ankles. This is well understood, and I'm surprised you haven't caught up to it in your reading.

Actually this version of the man-bat is far more accurate by other ones in comics and other canimated series of batman. In this one the body proportions are of a bat (e.g. the small legs compared to the torso) and the fingers (at least 3 of them) are part of the wings. In other representations the Man-bat he has like arms AND wings for example.