I seem to have let time get away from me this evening.  At least I've got something to show for it: 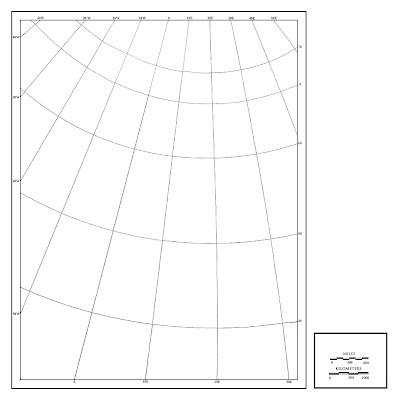 Yes, it looks funky with the scale off to the side, but I've got reasons.  Namely, I'm not sure where land's going.  For the poles, that didn't matter so much, but for inhabited continents, one doesn't want a scale in the way.  And look at all that nice lovely room I'll have for legends and so forth.

Doing this takes an extraordinary amount of time.  To top that off, most of today at work was frantically busy, so I couldn't sneak in ye olde political reading in between calls.  But I gathered some snippets for your reading pleasure.  For instance, you really mustn't miss Judd Gregg's temper tantrum.  My, he gets testy when folks ask him for policy specifics rather than meaningless platitudes, doesn't he?

The big news, of course, was the aftermath of the State of the Union address.  Rudy Giuliani has severe comprehension problems.  That's the charitable way of looking at it - the uncharitable view is that he's a lying little shit.  Take your pick.

All is not well in the world o' Teabagger conventions.  Not with Blackburn and Bachmann pulling out.  That leaves the organizers with no one but Sarah Palin to justify their $500 + attendance fees.  Tickets are still available!  Hurry, they're - well, not actually going fast, so no worries on finding a seat if you want to spend half a grand to listen to Palin's pablum.  I'd go, but I've got to pluck my nosehairs that day.

In good health care reform news, Pelosi's preparing to hit insurance companies where it hurts.  I like this idea of making them suffer the same anti-trust laws my own company has to follow.  It veritably warms the cockles of my heart.

I wonder how the Senate will fuck that up?

Speaking of the Senate and total fuck-ups, check out Evan Bayh's moral wrongs.

Pretty thin gruel today, I know.  But at least now you have time to go press-gang posts for COTEB, right?
Posted by Dana Hunter at 2:26 AM

I like this idea of making them suffer the same anti-trust laws my own company has to follow.

Not to mention every other company that isn't part of organized baseball. Of course, the cry will be that this will increase the cost of insurance, and there might be some justification for that claim. Still, I'd prefer real competition to the current scenario.