How I Spent My Weekend

Aside from battling it out with Windows, which has had some interesting ideas about its form and function since the format, I did manage to get some useful work done: 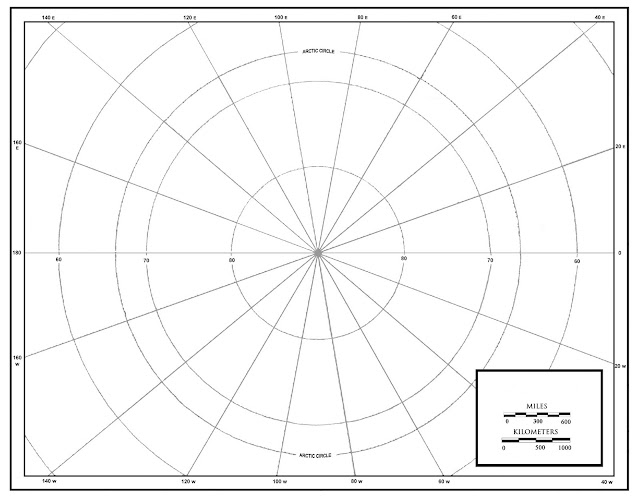 Now, I know what Efrique's gonna say: if he knew the projection (not scale - see how much I know?), he probably could've crunched the numbers and designed a little something.  That would have been lovely, and I adore him for offering.  Problem is, I know bugger-all about projection.  And considering I know bugger-all about projection and other aspects of map making, it's probably best working from known quantities anyway.  Y'see, making templates from existing maps means I can look at the existing map for a sense of how things should work.  My continents will be different, stuffed in different places, but it's still useful to have some basis for extrapolation.

This is what you have to do when you're a mathematical numbskull with horrible spatial visualization skills.  Besides, the other benefit is that it gives me practice drawing lines on something that's pretty hard to fuck up, which will prove useful when I have to actually draw the continents in.  Always pays to practice with the tablet.  Or so I'm telling myself.

In other news, George wanted to know if I had a Linux guru nearby who could set up my machine.  The answer is yes.  Yes, I do.  And he would love to get Windows out of my life.  But let's just put it like this: Mrs. DoF and I have something in common.  Windows I can fight with, and occasionally I even win the argument.  Linux I'd have to learn, and it's a summer project if I ever decide to do it at all.  Sure, Windows sucks, but it's a suck I'm familiar with.

For those of you who've emailed me: I'll be catching up on the backlog here soon.  For now, I must away to the shower, because while politics stinks, that doesn't mean I should....
Posted by Dana Hunter at 9:22 PM

Don't sweat it Dana, you do it any way that suits you. (But if you're looking for different maps you can play with, at least you'll find them easier to search for.)

And I seriously doubt you'te a numbskull of any type. [I do know that when it comes to mathematics, almost everyone feels dumb a lot of the time. I do almost every day when I'm doing it (which is almost every day).]

That one in the picture is one of the polar projections. Which one, I can't tell, though.

Actually, maybe I can tell.

There are two clues there that suggest it's probably an azimuthal equidistant polar projection.

Some links here that may be useful to you but probably aren't, aside from this one:
http://www.radicalcartography.net/?projectionref

(Click on the "WALL MAPS OF THE WORLD" link, and the others to see some maps with lots of information on each)

Now look what you did. I couldn't do anything else until I had drawn an azimuthal equidistant grid.

In the end it wasn't terribly hard, since I already have the (free) stats package R, I just downloaded a couple of packages for it related to drawing maps, and then it was a little playing around and some reading of the documentation to get something half decent.

It didn't end up quite as nice as your lovely map, though. I need to play around some more I guess.

Well, that was interesting.